Hucksters have sold and re-sold fake devices with collapsible radio antennas for years now claiming they can spot everything from bombs to HIV/AIDS. 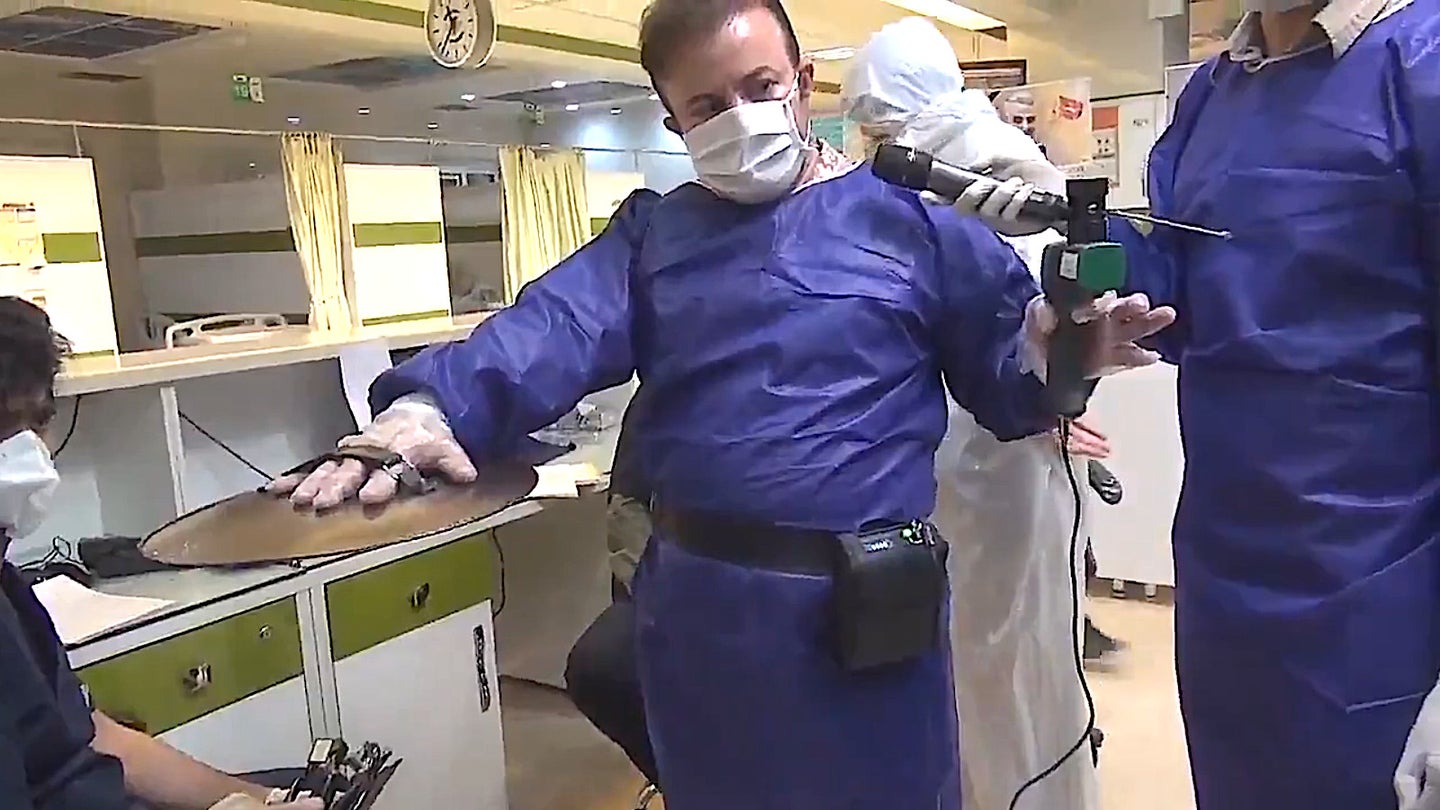 Iran claims that it has developed a "smart detector" that can confirm the presence of the virus at distances of almost 330 feet in seconds without the need to draw blood or even interact with a potentially sick individual. Unfortunately for the country, which has been particularly hard hit by the COVID-19 pandemic, the miracle medical device is clearly a fake that shares key features with infamous fake bomb detectors. This is just another example of the regime in Tehran making bizarrely farcical assertions about its technological, as well as military, achievements that border on outright comedy.

Major General Hossein Salami, head of Iran's powerful Islamic Revolutionary Guard Corps (IRGC), unveiled the supposed COVID-19 detector during a televised presentation in Tehran on Apr. 15, 2020. The "inventor" of the device, who is a member of the Basij, a paramilitary militia under the IRGC that often leads the violent suppression of internal dissent, was also present to demonstrate how it "works." This individual also demonstrated the system at a hospital in Tehran, an event that was filmed as an obvious propaganda stunt.

"This is an amazing scientific technique that has been tested across various hospitals," Salami said, claiming that the detector had demonstrated its ability to accurately detect the presence of COVID-19 around 80 percent of the time. "The technology could set the basis for the detection of all kinds of viruses."

The detector purportedly works by somehow generating a magnetic field via a handheld circular "dish" that isn't connected to anything, according to the IRGC's commander. An antenna on a handheld wand and linked to a battery pack carried on the hip then somehow picks up the virus.

If this was true, which it certainly is not and has no basis in scientific reality, the detector would be a welcome addition to the toolkit for combating the COVID-19 pandemic in Iran. Officially, Iran has had 76,389 confirmed cases of individuals contracting the virus since the beginning of the year, 4,777 of which have died. However, the United States and others, including members of the country's own parliament, have questioned the accuracy of those figures, which officials may be keeping low to try to deflect from the poor initial response to the pandemic and the growing strain it is having on Iran's medical system. Criticism of the regime's handling of the crisis has been growing in the country.

In addition to the COVID-19 detector, the head of the Iranian military's ground forces, Brigadier General Kiomars Heidari, separately announced this week that "a mega project for sterilizing cities and open areas" was underway. He also said the country's Army was working to make fixed and mobile military hospitals available to the general populace to respond to the pandemic and was working on projects to produce masks and disinfectants.

Whatever steps the Iranian government is actually taking, the IRGC's virus detector is completely bogus. The BBC's Shayan Sardarizadeh, who specializes in uncovering actual fake news and disinformation, pointed out in a series of Tweets on Apr. 15 that detector's wand component had a collapsible antenna, similar to the one you might see on a portable radio.

This is a key feature in a number of fake bomb detectors that hucksters have sold and re-sold across the Middle East, as well as other areas of the world, for years. In fact, the one on the supposed COVID-19 detector looks as if it might have been directly taken off one of two specific fake bomb detectors, the GT200 from U.K.-based Global Technical Limited and the Alpha 6, which British couple Joan and Sam Tree made in a garden shed behind their home. Both of these were widely exported to the Middle East, Africa, the Indian subcontinent, and Latin America in the 2000s.

In 2013, Gary Bolton, Global Technical's own, was convicted of fraud in the United Kingdom and sentenced to seven years in jail. That same year, Samuel Tree received his own three-year sentence, while his wife Joan received a suspended sentence. James McCormick, the founder of U.K.-based Advanced Tactical Security & Communications Limited, which had sold another fake bomb detector with a collapsible antenna, the ADE-651, also ended up with a 10-year jail term that year.

Despite them being outed as fakes, and numerous countries officially banning their use, these devices, and repurposed and repacked versions and derivatives thereof, continue to pop up regularly, especially in the Middle East. A 2016 report that the Spanish military's Counter Improvised Explosive Devices Center of Excellence put together for NATO identified no less than eight different brandings of collapsible antenna style fake bomb detectors in some form of circulation around the world.

Iran's COVID-19 detector itself might have been ever so very slightly more believable if the country's authorities hadn't unveiled an "electronic fuel detector" to catch fuel smugglers three years ago that is clearly the exact same bogus setup. Beyond that, the BBC's Sardarizadeh pointed out that the Basij member behind the "new" virus spotting device was the exact same person responsible for "inventing" the supposed fuel detector.

These fake devices have typically been marked as being able to detect the presence of various "substances" beyond explosives, including narcotics, which has led some to previously make claims that they could spot various other illnesses. In 2014, Egyptian officials similarly claimed that they had adopted a no-touch medical system called C-Fast to detect HIV/AIDS, hepatitis-C, and other serious ailments, which turned out to be yet another bogus device using a wand with a collapsible antenna.

When it comes to Iran, specifically, the COVID-19 detector is just one of a number of absurd claims the country's authorities have made in recent years about technological achievements in both the military and civilian sectors. Just this year, Iran's Minister of Information and Communications Technology Tweeted out a picture supposedly of a prototype spacesuit for future Iranian astronauts. Iran watchers online quickly determined that it was a repurposed children's Halloween costume, available online for around $20. Last year, the IRGC put up a mural to commemorate the 40th anniversary of the Iranian Revolution that implied Iran had invented the Space Shuttle. This is in addition to other infamous military examples, such as the laughable Qaher F-313 "stealth fighter" mockup and the repeated claims that the Kharg, a modified oil tanker with a helipad, is actually an aircraft carrier.

Hopefully, for the sake of Iran's citizens, the IRGC's pathetic COVID-19 detector will remain a failed propaganda ploy and there will be no actual attempts to employ it test for possible cases of this very real and dangerous virus.