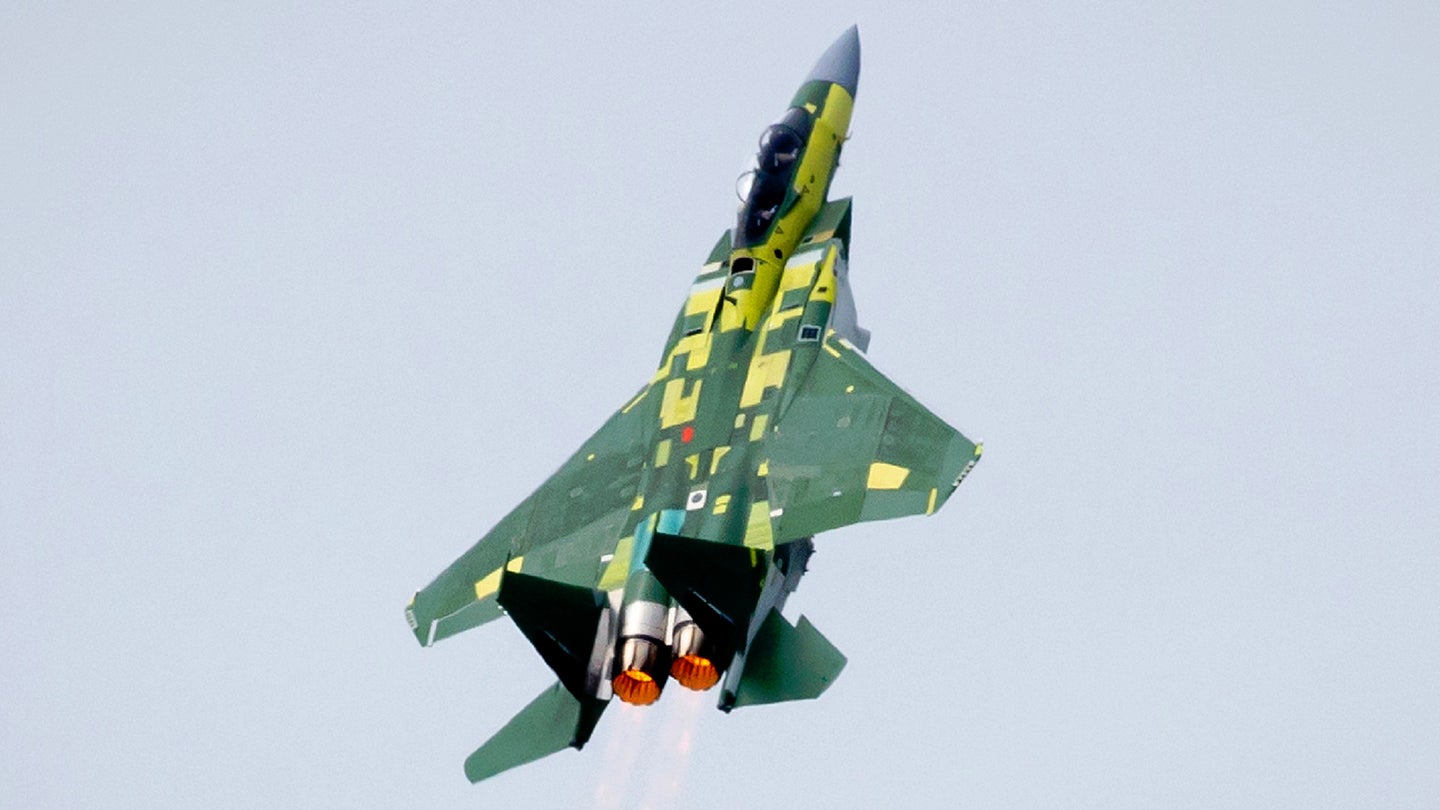 Boeing has conducted the first flight of the advanced F-15QA fighter jet for the Qatar Emiri Air Force. Chief Test Pilot Matt Giese started the flight test off in spectacular fashion with a so-called "Viking takeoff," which involves climbing at an extremely high angle at full afterburner to rapidly gain altitude.

On Apr. 14, 2020, the Chicago-headquartered planemaker announced the first flight of the F-15QA variant – the "QA" standing for “Qatar Advanced” – which took place around Lambert International Airport in St. Louis, Missouri. Boeing says the aircraft demonstrated its agility with both the Viking takeoff and other maneuvers, some of which involved pulling up to 9 Gs, over the course of the 90-minute test.

"This successful first flight is an important step in providing the QEAF [Qatar Emiri Air Force] an aircraft with best-in-class range and payload," Prat Kumar, a Boeing Vice President and the company's F-15 program manager, said in a statement. "The advanced F-15QA not only offers game-changing capabilities, but is also built using advanced manufacturing processes which make the jet more efficient to manufacture. In the field, the F-15 costs half the cost per flight hour of similar fighter aircraft and delivers far more payload at far greater ranges. That’s success for the warfighter."

Qatar signed a contract to buy 36 F-15QAs, via the U.S. military's Foreign Military Sales program, in 2017. At the time, Bloomberg said the total price tag for the fighter jets, along with associated equipment and support services, was around $12 billion. In its press release regarding the first flight, Boeing said it had received $6.2 billion via a U.S. Department of Defense contract, but did not say if this was the total value of the sale.

Derived from the F-15SA, or "Saudi Advanced," variant for Saudi Arabia, Boeing is billing the F-15QA as the most advanced production version of its F-15 Eagle series to date. The QAs have a number of features already found on the SA, including an integrated AN/AAS-42 Tiger Eyes infrared search and track (IRST) system, and two additional underwing pylons. Those extra pylons notably allow the jets to carry up to 16 AIM-120 Advanced Medium-Range Air-to-Air Missiles (AMRAAM) at once.

Boeing also says the F-15QAs will have fly-by-wire flight capability, a robust digital electronic warfare suite, and the "world's fastest mission computer,"  which are also found on the SAs. Instead of the Raytheon AN/APG-63(V)3 active electronically-scanned array (AESA) radar on the Saudi variants, the F-15QAs will have the AN/APG-82(V)1, another Raytheon AESA that U.S. Air Force already uses on its F-15E Strike Eagles and Israel also picked as an upgrade for its F-15Is. This radar is part of a proposed "Japanese Super Interceptor" upgrade package for Japan's F-15Js.

However, the Qatar Advanced jets have unique features, as well. This includes a completely redesigned glass cockpit with a new heads up display from BAE systems. This is in addition to the single, large, customizable flat-screen displays that replace earlier arrays of multiple multi-function displays and older "steam gauge" instrument readouts in both the front and rear cockpits. You can read more about these cockpit updates and the improved capabilities they offer in this previous War Zone piece.

The F-15QAs also feature a new structural design for the wing, a major improvement that makes it stronger without compromising its aerodynamics. Boeing has also proposed this wing as a life-extension upgrade for existing F-15 operators.

"We are very proud of this accomplishment and looking forward with great excitement to the continued successes of this program," Qatari Colonel Ahmed Al Mansoori, who is in charge of the F-15 program for the QEAF, said in a statement. "This successful first flight is an important milestone that brings our squadrons one step closer to flying this incredible aircraft over the skies of Qatar."

The QAEF plans to replace its aging French-made Mirage 2000-5 fighter jets with the new advanced F-15s. Beyond that. the acquisition remains geopolitically significant for Qatar, which remains locked in a serious political dispute with a number of other countries in the Middle East, including Saudi Arabia and the United Arab Emirates. The announcement that the U.S. had approved the sale of the jets to the Qatari government came just months after the spat first erupted in 2017.

The Qatari contract is also important for Boeing and its F-15 production line and the design improvements on the F-15QA, as well as the F-15SA, will help inform the development of the new F-15EX variant for the U.S. Air Force. You can read more about the F-15EX and its origins in these past War Zone stories.

At the moment, though, Boeing looks to be making good progress on the F-15QA, deliveries of which to Qatar are scheduled to start either later this year or early next year.