Is This Base Handover Ceremony In Iraq Happening At A Low Budget Shakespeare Festival? (Updated)

I don’t think they could have come up with a more random, bizarre-looking, and frankly hilarious backdrop for this serious event. 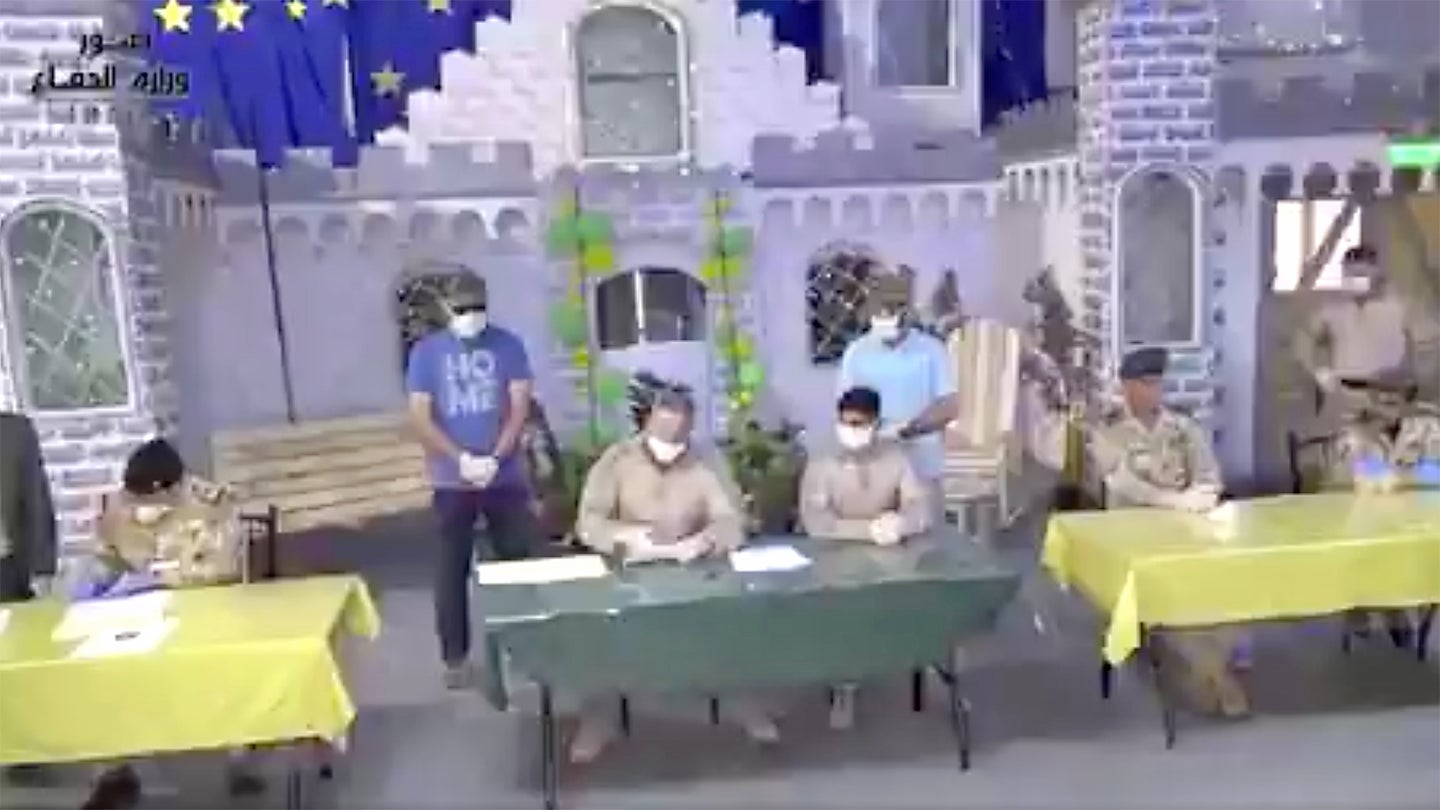 Child's pizza parlor and arcade? High school drama department set? Medieval Times liquidation sale? I have no fucking clue, but for some reason, this is the backdrop for the official sign over of a huge coalition base in Iraq's Anbar Province to Iraqi Security Forces.

The Iraqi Ministry of Defense posted the clip on its official Twitter account today, showing a fairly straightforward formal turnover of the massive Al Habbaniyah Air Base—better known by its Saddam-era name, Al Taqaddum Air Base—that had been under the control of Combined Joint Task Force Operation Inherent Resolve (CJTF-OIR). This is another step in America's now accelerated drawdown of forces in the war-torn country.

But what's so weird is the choice of backdrop for the handover ceremony, which looks like some low-budget European castle set complete with turrets, starry-sky backdrop, and twinkling Christmas lights. It's random and tacky. Really, really random and tacky.

It is unexplained what the heck this thing is or why it exists, let alone why, of all places, they chose to do the signing ceremony there. There even is also a very casual dress code for the landmark event, with one dude wearing a t-shirt that reads "HOME" and another in a pastel polo.

Here is the complete statement about the handover from CJTF-OIR:

Due to Iraqi Security Forces' success in the campaign against Daesh, the Coalition is adjusting its positioning in Iraq. These military movements are long-planned in coordination with the Government of Iraq. These pre-planned base transfers are not related to recent attacks against Iraqi bases hosting Coalition troops, or the ongoing COVID-19 situation in Iraq.

"The transfer of Taqaddum (Habbaniya) air base is another step forward in the ongoing partnership between Iraqi Security Forces and the anti-ISIS international military Coalition," said Brig. Gen. Vincent Barker, CJTF-OIR director of sustainment. “Over the last month we have transferred four bases to full ISF control. This wouldn’t be possible without the ISF’s proven capability to bring the fight to ISIS. The Coalition will continue to support our partners against the evils of Daesh.”

Since 2015, TQ has hosted U.S. and other Coalition forces who trained Iraqi Security Forces and acted as advisors in the Iraqi operations center in support of the fight against ISIS. TQ was primarily operated by U.S. Marines but also hosted Italian, Canadian, and Spanish forces. In early 2016, Coalition advisors supported the Iraqi Army in its recapture of Ramadi and Fallujah from ISIS control.

CJTF-OIR will relocate and consolidate personnel and equipment from several Iraqi bases throughout 2020. The ISF increasingly conducts independent operations in the fight against Daesh and the defense of their homeland including the 2020 “Heroes of Iraq” and 2019’s “Will of Victory” campaigns. CJTF-OIR remains in Iraq at the invitation of the Government of Iraq and continues anti-ISIS advising. Currently, training operations are temporarily paused due to COVID-19 precautions. The Coalition will operate from fewer locations, but remains committed to supporting our partners in their fight against Daesh.

Coalition troops will depart TQ after the completion of equipment transfers to the ISF, in the coming days.

Although CJTF-OIR says that this base transfer was long-planned, an accelerated drawdown of forces and the move to relocate those still in the country to more defensible positions comes after a spate of nefarious Iranian-backed proxy forces activity, some of which has turned deadly, in recent weeks. Patriot air defense batteries have finally arrived to guard key coalition operating bases that remain in the country as top U.S. officials, including President Donald Trump, have warned of a potential pending offensive by Iranian proxies against U.S. and coalition forces in the region.

Some have found this puzzling as Iran is reeling from the COVID-19 pandemic and even Iranian proxies in Iraq have said they will not attack coalition forces if they continue to drawdown. There have also been reports that the United States has been at least exploring plans for a massive offensive against Iranian-backed Iraqi militias.

Regardless, I have no clue what exactly is going on with this wacky backdrop, or the dude in the 'HOME' t-shirt, but it is pretty damn bizarre and funny looking. I guess it's just another one of the pile of peculiar head-scratchers that have come out of the last 17 years of a near-continuous American military presence in Iraq.

A reader who has been deployed to the base gave us a great background on this wacky thing:

The ‘winter fortress’, as we called it, covered an entire wall in the dining hall. For context, it was allegedly in the contract with Kellogg Brown and Root (KBR) that they do something elaborate for every holiday—desserts, decorations, etc. As most of the KBR contractors are from Eastern Europe of SE Asia, most of the decorations reflected their best guess on what western countries would have as decorations for said holidays and therefore usually had a gaudy and bizarre flair.

Rumor had it that a few years back, KBR had a monetary surplus from what they were supposed to provide by way of food and decorations, and so, during one Christmas, they used it to construct the winter fortress. Apparently they were very proud of this endeavor, as the fortress stood resolute, in its ten feet of plywood glory, towering over us as we ate in the chow hall, during all seasons and many holidays, a monument to government waste and absurdity.

Thank you for validating precisely how bizarre this is as a backdrop for a deployment to a ‘combat zone.’