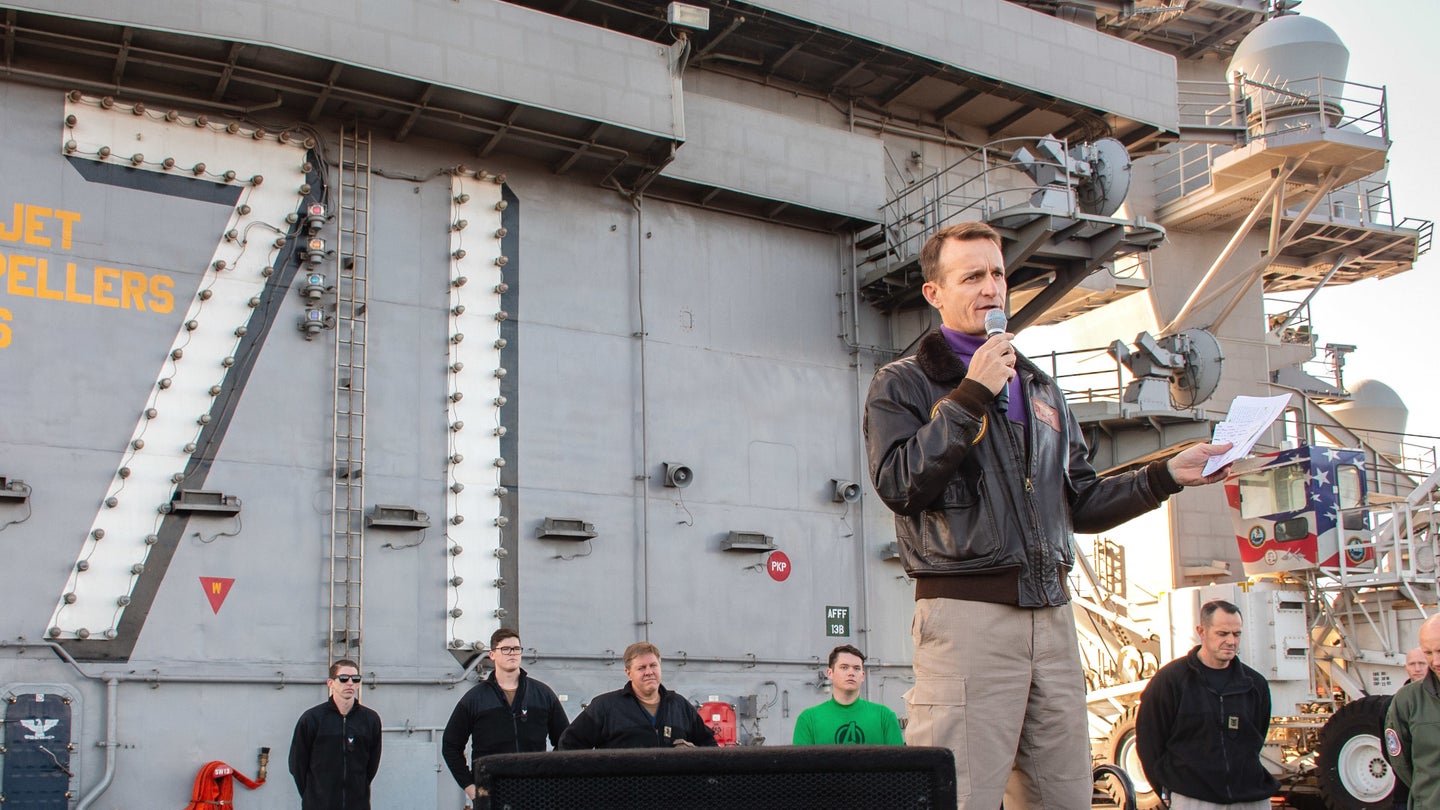 The Acting Secretary of the U.S. Navy has said the service could punish whoever leaked a damning letter from the commanding officer of the Nimitz class aircraft carrier USS Theodore Roosevelt regarding the response to a major outbreak of the COVID-19 novel coronavirus on his ship. This would include the author of that letter, Captain Brett Crozier, if it turns out he was involved in distributing his missive to the press.

Crozier's letter, which is dated Mar. 30, 2020, first emerged publicly yesterday after the San Franciso Chronicle obtained a copy. It decried the Navy's approach to handling the growing number of COVID-19 cases on board the Theodore Roosevelt and proposed moving 90 percent of the more than 4,000 crew members ashore to stem the virus' spread.

The carrier is presently docked in Guam, where it arrived on Mar. 26 after a number of sailors tested positive for the novel coronavirus. As of Apr. 1, 2020, the Navy said that 93 of the Theodore Roosevelt sailors have contracted the virus, 86 of which are exhibiting symptoms. The service also said that it had tested 24 percent of the ship's crew, with 593 negative results.

This conflicts with San Franciso Chronicle's story, which said there were reportedly between 150 and 200 confirmed cases. It's also important to note that there is significant evidence that individuals who have contracted COVID-19 can transmit it to others even while asymptomatic. Crozier, in his letter, had pointed out that seven of the first 33 sailors on the ship confirmed to have contracted the virus had initially tested negative.

"Let me emphasize that this is exactly what we want our commanding officers and our medical teams to do," Acting Secretary of the U.S. Navy Thomas Modly, told reporters on Apr. 1, referring to Crozier's decision to write his letter. "The fact that he [Crozier] wrote the letter up to his chain of command to express his concerns would absolutely not result in any type of retaliation."

"We are not looking to shoot the messenger here, we want to get this right," U.S. Navy Admiral Mike Gilday, the Chief of Naval Operations, said at the same press conference. He added that he felt there had been possible "breakdown in communications" between Crozier and his superiors.

However, it seems clear that the Navy's top leadership, as well as other senior U.S. military officials, is extremely embarrassed by the letter and is equally unhappy that it has become public. “I don’t know who leaked the letter to the media," Modly said. "That would be something that would violate the principles of good order and discipline, if he [Crozier] were responsible for that. But I don’t know that."

The general consensus is that Crozier felt he had to write the letter at all in order best safeguard his crew, even at the cost of his career in the Navy. It's also impossible to know how the service might have responded if it did not become public. There is certainly some evidence that senior Navy and other top U.S. military officials had not been taking the situation as seriously as they should have. U.S. Secretary of Defense Mark Esper baffling told CBS' "Evening News" late yesterday that he had not yet even read Crozier's letter, despite it being a major national news story all day.

"We are not at war, and therefore cannot allow a single Sailor to perish as a result of this pandemic unnecessarily," Crozier had written. "Decisive action is required now in order to ... prevent tragic outcomes."

The Navy now says it has removed 1,000 sailors from the carrier and is trying to make arrangements to pull another 2,700 members of the crew off the ship and move them into quarantined accommodations, including hotels, ashore. There are more than 4,000 personnel assigned to the ship at present, meaning this plan could still leave more sailors onboard than the 10 percent Crozier had advocated for in his letter.

"Taking all of the crew off of the ship does not make them safer," Acting Secretary of the U.S. Navy Thomas Modly told reporters on Apr. 1, saying that there was a certain number of sailors necessary to maintain critical systems, including the carrier's two nuclear reactors, provide security, and perform other essential functions. Crozier's letter does not dispute this, but makes clear that the captain felt that just 10 percent of his crew could manage these tasks.

Modly and Gilday have both repeatedly insisted that the carrier is ready to deploy in response to a crisis, if necessary. Crozier's letter does not specifically argue that the ship is not capable of conducting operations in its present state, but it does say that a strategy to "maximize warfighting readiness and capacity as quickly as possible" means, unquestionably, "we go to war with the force we have and fight sick. We never achieve a COVID-free TR [Theodore Roosevelt]. There will be losses to the virus."

Crozier also made clear that he felt that his crew was being exposed to unnecessary risks in a peacetime environment. "Keeping over 4,000 young men and women on board the TR is an unnecessary risk and breaks faith with those Sailors entrusted to our care," he wrote.

"It's disappointing to have him say that," Modly said about those particular comments. "I know that's not the truth."

Whatever the case, Crozier has succeeded in getting a pledge from the Navy to move the bulk of his crew ashore and into quarantine off the ship. What may happen to the captain himself, now and in the future, in terms of both disciplinary action and career prospects, very much remains to be seen.