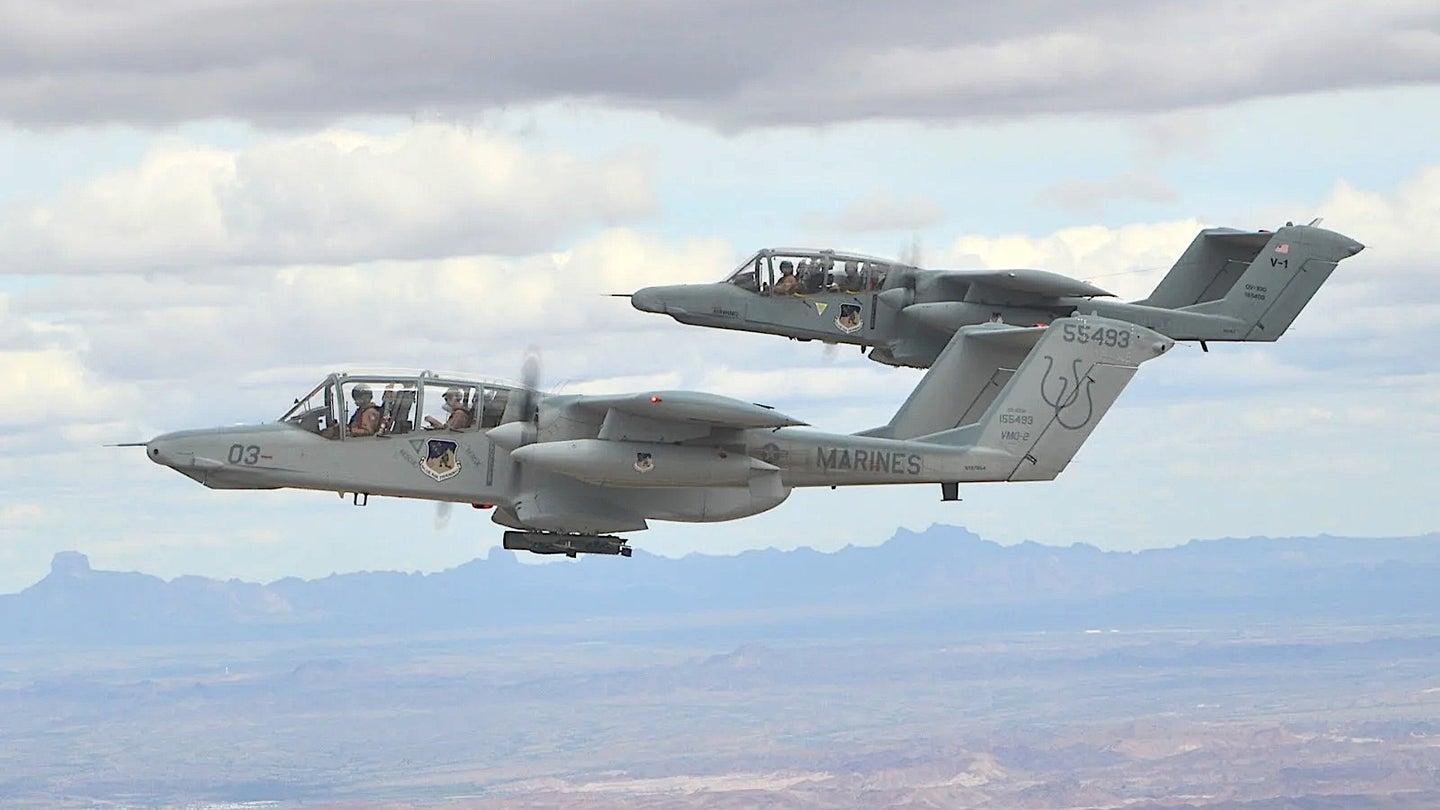 A quarter-century after the last OV-10 Broncos left U.S. military service – not counting experiments and a brief field test in Iraq involving a pair of heavily modified OV-10G+ variants on loan from NASA – U.S. Air Force Forward Air Controllers, now dubbed Joint Terminal Air Controllers (JTACs), may find themselves working with these light attack planes again soon during training programs and exercises. Blue Air Training, a private contractor that has already secured a deal to provide such a service, recently announced that it was in the process of acquiring seven Broncos.

The Las Vegas, Nevada-headquartered contractor first revealed its Bronco plans on Mar. 27, 2020. The company, which also operates out of Pensacola, Florida, said the aircraft would be a mixture of OV-10D+ and OV-10G variants, but did not say how many of each it was buying. Blue Air Training was one of seven different companies to get an indefinite-delivery/indefinite-quantity contract in October 2019 as part of a massive multi-billion dollar Air Force effort to acquire contractor-operated aircraft to support both air-to-air and air-to-ground training requirements at bases across the United States.

“As a career A-10 Pilot, I’ve always had a tremendous respect and appreciation for the OV-10 Bronco," James “Chef” Barlow, Blue Air Training's Founder and CEO, said in a statement. "For those very reasons the seven OV-10D+ and OV-10G Broncos we are adding to the Blue Air Close Air Support fleet are undeniably the best JTAC [Joint Terminal Air Controller] training platform in the air, anywhere."

Under its contractor air support mega-contract, the Air Force wants companies to fly approximately 10,000 flight hours during routine JTAC training and exercises, in total, annually across nine different U.S. Army bases. It's not clear yet what portion of this requirement Blue Air Training will fulfill and whether its Broncos will be the only planes involved. The company also has a fleet of Cold War-era BAC Jet Provost and Strikemaster light jets, as well as Romanian-made IAR-823 propeller-driven light trainers and A-90 Raider light turboprop aircraft. The A-90s are modified ex-Finnish Air Force L90 turboprop trainers. According to our friends at Scramble.nl, the company also recently bought a half dozen ex-Royal Australian Air Force PC-9 turboprop trainers. All of these aircraft are suitable for training personnel on the ground, such as JTACs, to call in airstrikes and otherwise coordinate with aerial assets.

The twin-engine Broncos will certainly offer greater performance over the single-engine IAR-823s and have greater endurance and stores carrying capabilities than the A-90s and PC-9s. The OV-10D+s and OV-10Gs also have the benefit of having been designed from the start as a light attack aircraft, with two pylons for stores on each of a pair of sponsons attached to the center of the fuselage, as well as a centerline station and two underwing hardpoints.

The aircraft also has provisions for a sensor turret under the nose and Blue Air Training says its fleet will have forward-looking infrared (FLIR) capability and Link16 data links, which are in widespread use across the U.S. military, as well as other military forces around the world. The Bronco also has a unique rear compartment capable of holding equipment, personnel, or even being employed for small airdrops, which the company could take advantage of in the future.

It's not entirely clear where the seven aircraft are coming from. An OV-10D+, known by its old U.S. Navy Bureau Number (BuNo) 155493, and an OV-10G, also referred to by its BuNo, 155409, are among the Broncos that Blue Air Training is buying, according to Warbird News.

The Navy first acquired 155493 as an OV-10A in 1968 and it was among the fleet assigned to the service's famous Light Attack Squadron Four (VAL-4), also known as the "Black Ponies," during the Vietnam War. It was later transferred to the U.S. Marine Corps, where it was later converted into the OV-10D configuration with its distinctly longer nose, as well as uprated engines and other improvements. All of the Marine OV-10Ds were further upgraded into D+s in the 1990s with strengthed wings, updated wiring, and other improvements as part of a service-life extension program.

The Marine Corps, which was the last U.S. military service to fly the Bronco on a widespread basis, retired the last of its examples in 1995. The Air Force sent its remaining OV-10s to the bone yard four years earlier.

The U.S. State Department's Air Wing, which you can read about in more detail in this past War Zone story, eventually acquired 155493, among other OV-10s, and had Marsh Aviation put it through another upgrade and modification program to turn it into an herbicide sprayer aircraft to support counter-narcotics operations. Beyond the spray equipment, the most visible change was the addition of four-blade propellers to the plane's two engines.

After its service in the War on Drugs, the Mangic Foundation subsequently acquired the aircraft for its OV-10 Squadron project, which is focused on preserving the history of the Bronco and honoring the pilots that flew them. The OV-10 Squadron announced that it had restored 155493 back to flying condition in July 2019.

The Marines also flew 155409, which again started life as an OV-10A and left service as an OV-10D+. The State Department acquired this aircraft for spray operations, as well, and had Marsh Aviation upgrade to the even more capable OV-10G standard. This aircraft eventually made its way to the Valiant Air Command, Inc. Warbird Museum in Florida.

The Mangic Foundation had acquired a total of seven Bronco airframes for restoration as part of its OV-10 Squadron project, so it is possible that Blue Air Training's other five aircraft are coming from this source, as well. North American Rockwell only ever built 360 Broncos of all variants, in total, and only a limited number of them still in military or civilian hands, in any condition, worldwide.

In 2018, the U.S. Air Force made plans to send NASA's two OV-10As and its pair of OV-10G+s to the Phillippines, which is the last military operator of the type anywhere in the world, though it's unclear if that transfer ultimately occurred. NASA has long been the last U.S. government Bronco operator. Its OV-10G+s had also notably been part of a U.S. military program, led by U.S. Special Operations Command, known as Combat Dragon II, that explored light attack aircraft tactics, techniques, and procedures between 2012 and 2015, culminating with an actual combat field test in Iraq. You can read more about that deployment and the Combat Dragon II program in these past War Zone pieces.

Regardless of the source of the Broncos, the services and capabilities that Blue Air Training can offer will significantly increase with the acquisition of the OV-10s and it will also give those aircraft a new lease on life. Air Force JTACs, and potentially combat controllers from other U.S. services and U.S. Special Operations Command, look set to be working with these aircraft again, at least during training, in the near term.

The planes are likely headed to the Philippines, but they might only be a stopgap until A-29 Super Tucanos replace the OV-10s for good.