After its controversial decision to pick the Beretta M9 as the new US military standard sidearm, the service held a joke of a second competition. 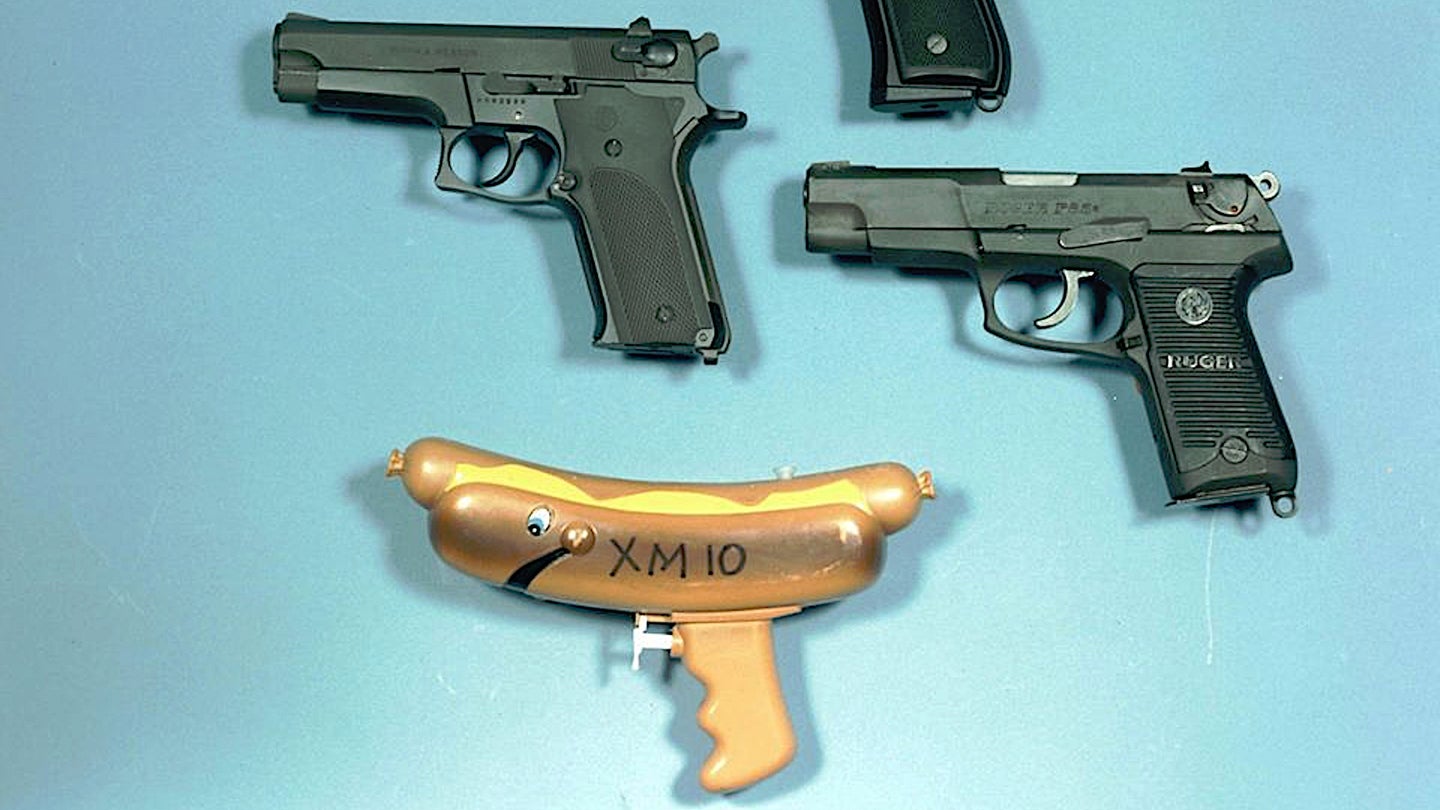 Recently, the U.S. Army's Rock Island Arsenal Museum found a picture in its archives that appears to be of a joke regarding the service's abortive XM10 pistol competition, which followed the controversial adoption of the Beretta M9. The photo shows the three actual handguns that took part in that program together with a squirt gun shaped like an anthropomorphic hot dog with "XM10" scrawled on the side.

The Rock Island Arsenal Museum, the Army's second oldest museum, which is located at the arsenal of the same name in Rock Island, Illinois, posted the picture on its Facebook page on Mar. 6, 2020. Rock Island Arsenal, which first opened in 1862, remains an active research and development facility specializing in small arms and artillery systems, among other things, and is home to the only foundry still in operation within the Army.

The War Zone reached out to the Rock Island Arsenal Museum after seeing the picture to see if there was any more information about it. "We came across this image while filing photos in our archives, and unfortunately there was no information accompanying the image," S. Patrick Allie, the museum's director, told us in an Email.

"What we do know is this image shows the weapons, excepting the 'hot dog gun,' that were part of the 1988 XM10 sidearm trial which was a follow up to the XM9 trial," he added. "If I were to speculate, I would say it was workers on the project having fun, or perhaps making a commentary on a trial that wasn't being taken as serious since among the pistols in the trials was the M9 Beretta which was already adopted, and was the pistol that eventually won the XM10 trial."

These are good theories given the circumstances that led to the XM10 competition in the first place and virtually doomed it to failure from the very start – that is if the Army had ever been serious about it, to begin with. Starting back in 1977, the U.S.-military-wide Joint Service Small Arms Program (JSSAP) had begun trials searching for a new 9mm pistol to become the standard sidearm across the services.

The winning gun in this competition was to be designated the XM9 and replace a slew of existing automatic handguns and revolvers, including the venerable .45 caliber Colt M1911-series pistols and .38 caliber Smith & Wesson M15 revolvers. The Army, which was leading the effort, eventually narrowed down the field of contenders to the Beretta 92FBS, the Sig Sauer P226, the Heckler and Koch P7A10, and the Smith & Wesson 459. After tests in 1983, the service added in the Steyr GB, the FN Hi-Power BDA, the Colt SSP, and the Walther P88 to the mix.

The field eventually narrowed to just the offerings from Beretta and Sig Sauer, with the Italian-made gun winning the competition in 1985. This immediately sparked a protest from Sig Sauer, who argued that testing showed that its pistol was superior and it had only lost because of collusion between Beretta and the Army.

The Army and the Government Accountability Office spent two years going back and forth about the protest until the former agreed to conduct a second trial. This competition, for a pistol to be designated the XM10, quickly became a farce. Sig Sauer refused to participate after its experience with the XM9 program. Beretta also wouldn't take part because of its position that it had fairly won the XM9 contract.

It took another year for the Army to convince Smith & Wesson and Ruger to submit their 459 and P85 pistols, respectively. During the XM10 trials in 1988, the service also included some of the Beretta 92FBSs. The Rock Island Arsenal "hot dog gun" certainly epitomizes the Army's struggle to find willing participants. By the end of 1988, the Army had declared the Beretta the winner again, ending the XM10 program.

Whatever the truth behind the Army's decision to pick the Beretta pistol, the XM9 did certainly have serious teething issues as it evolved into the standard-issue M9. Most infamously, between 1985 and 1988, Army and Navy testers documented at least 14 instances where the Beretta's slide failed, sending parts flying off the back of the gun. In four of those cases, the shooter was seriously injured.

Between 1989 and 1993, the Army and Beretta worked to correct this issue on the initial run of 160,000 guns. However, in 2015, inspections of some of the oldest M9s still in service in the Army showed that at least some of them were lacking these critical parts and still posed a major hazard to shooters. The service ordered all units to determine if they had any guns from these original batches and mail any pistols without the appropriate modifications straight to the Defense Logistics Agency.

Some years after losing its bid to become the supplier of the standard U.S. military sidearm, Sig Sauer won a separate contract to supply P228 pistols, a compact version of its P226, for plainclothes military police officers and other personnel needing a more concealable gun, which became the M11. Sig Sauer has, of course, now really had the last laugh.

After years of abortive attempts to replace the M9, in 2017, the Army finally selected full-size and compact versions of the company's P320 pistol series as the M17 and M18 respectively. These guns are now set to become the standard sidearm across the U.S. military, though other handguns will remain in service among more specialized elements, especially special operations forces.

After all this time, the XM10 competition has faded into obscurity. The "hot dog gun" would strongly suggest that, even at the time, those involved saw it as a joke best forgotten.

The cartridge is designed to better punch through obstacles such as windows or even just heavy clothing and then still work like it’s supposed to.