The complete operation appeared to involve multiple aerial refuelings for the Osprey over the Mediterranean Sea as it headed for Jordan. 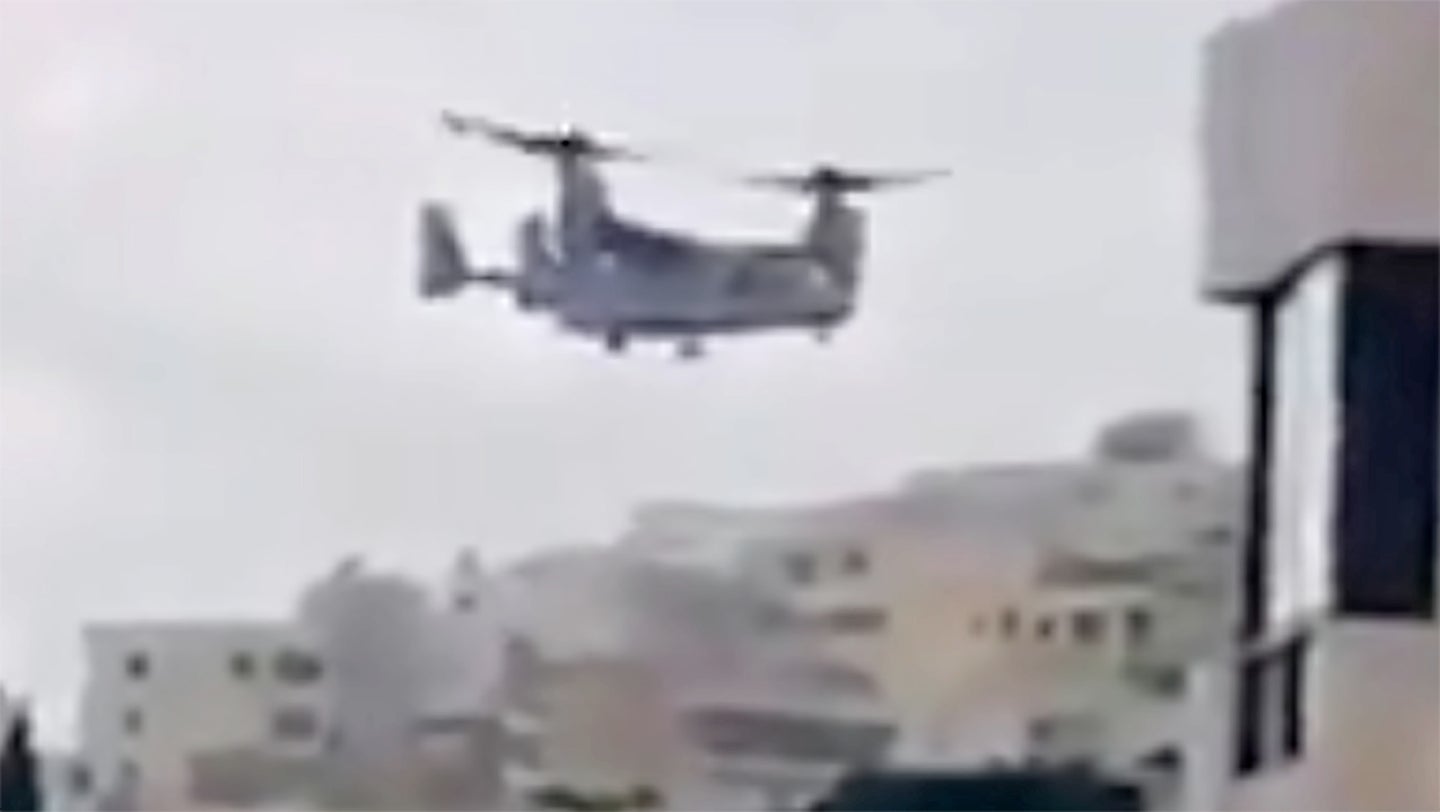 A lone V-22 Osprey tilt-rotor arrived at the U.S. Embassy in Beirut, Lebanon earlier today and stayed only briefly, possibly departing with Amer Fakhoury on board. Fakhoury, a naturalized U.S. citizen, was arrested while visiting his native Lebanon last year on charges that he had tortured prisoners while fighting with an Israeli-backed armed group during the 1990s. He was released today after his charges were dropped, in part due to pressure from the U.S. government and Congress.

The office of Senator Jeanne Shaheen, a New Hampshire Democrat, who has been a key figure in securing Fakhoury's release, announced he was on his way back to the United States in a statement on Mar. 19, 2020. It did not mention how he had departed Lebanon. However, earlier in the day, video footage had emerged on social media of the V-22 flying to the Embassy in Beirut and departing approximately 10 minutes later.

The Osprey appears to have been a U.S. Marine Corps MV-22B. Plane spotters using online flight tracking software had also tracked a Marine Corps KC-130J Hercules tanker flying in orbit off the coast of Lebanon around the same time. A U.S. Air Force KC-10A Extender was also in the same area and appeared to refuel the KC-130J at one point, but the Marines Hercules are not capable of doing so, raising questions about what was going on. Regardless, the KC-130J eventually headed south, flying another orbit off the coast of Israel, before heading further south across Egypt's Sinai Peninsula.

This would all make good sense. Due to diplomatic issues, U.S. military aircraft cannot fly directly between Lebanon and Israel. The route that the KC-130J flew is typically seen in flights between Beirut and larger American bases in Jordan. To execute this movement, the MV-22B would have had to refuel, requiring support from the KC-130J. The larger KC-10A could have been in a position to refuel other aircraft supporting the operation.

It also possible that the KC-130J was simply on station to assist if required and that the MV-22B flew to a ship waiting offshore. However, the fact that the Hercules flew a second apparent refueling orbit further south after the Osprey had been seen leaving Beirut strongly suggests it was dragging the tilt-rotor with it toward Jordan.

"Anytime a U.S citizen is wrongfully detained by a foreign government, we must use every tool at our disposal to free them," Shaheen said in a statement. "I’m very glad that Amer is finally coming home and will be reunited with his family."

Fakhoury had stood accused of running the Khiam Prison, allegedly earning the nickname "the Butcher of Khiam," as a member of the South Lebanon Army (SLA) in the 1990s. The SLA fought the Iranian-backed Lebanese militant group, among others, with Israeli support between 1982 and its disbandment in 2000. Khiam was reportedly the site of horrific torture and human rights abuses during the Lebanese Civil War.

Fakhoury lawyers disputed his role at the prison, saying he never interacted with prisoners. Shaheen and others in Congress lobbied heavily for his release and threatened sanctions against the Lebanese government, of which Hezbollah is now a part. Last year, President Donald Trump also held up military aid to Lebanon, but it is unclear if this was related in any way directly to Fakhoury's case.

Earlier this week, a Military Court of Appeals dropped the charges against Fakhoury, ostensibly citing a statute of limitations. There was an attempt by a Lebanese Military Judge to reverse that decision, which appears to have failed or at least not proceeded fast enough to prevent him from leaving the country. This may have, in fact, required the use of the Osprey to spirit him out of the Embassy directly. Lebanon is also now under a nation-wide lockdown over the expanding COVID-19 novel coronavirus pandemic, which includes shutting down the airport in Beirut, and Fakhoury is said to be in poor health already and in need of immediate medical care.

"American citizen Amer Fakhoury, who has been in detention in Lebanon since September, is returning to the United States where he will be reunited with his family and receive urgent medical treatment," Secretary of State Mike Pompeo said in his own statement. "His return comes as a relief to those who have followed the case with grave concern. We are relieved to be able to welcome him back home."

Secretary of Defense Mark Esper and Chairman of the Joint Chiefs of Staff U.S. Army General Mark Milley were also mentioned, indicating a military component in the efforts to get Fakhoury home. The War Zone reached out to the U.S. State Department and the U.S. Embassy in Lebanon to confirm that the Osprey did indeed carry Fakhoury out of the country, but had not received any responses at the time of writing.

We will update this story as more information becomes available on how the U.S. government helped Fakhoury get back to the United States.

Fox News is now reporting that the Osprey was indeed a Marine MV-22, which launched from the Wasp-class amphibious assault ship USS Bataan, and that it did carry Amer Fakhoury out of the country. Despite the path of the KC-130J seen on online flight tracking software, the MV-22 reportedly then flew to Naval Support Activity Souda Bay on the Greek Island of Crete.

Fakhoury is apparently still in transit back to the United States.

Lebanon Gets Bradley Fighting Vehicles as it Continues to Battle ISIS

The delivery reflects increasing American support for the country’s complex fight against terrorists.