The first operational MH-139As will be guarding missile silos in areas where winter temperatures can drop to minus 30 degrees Fahrenheit. 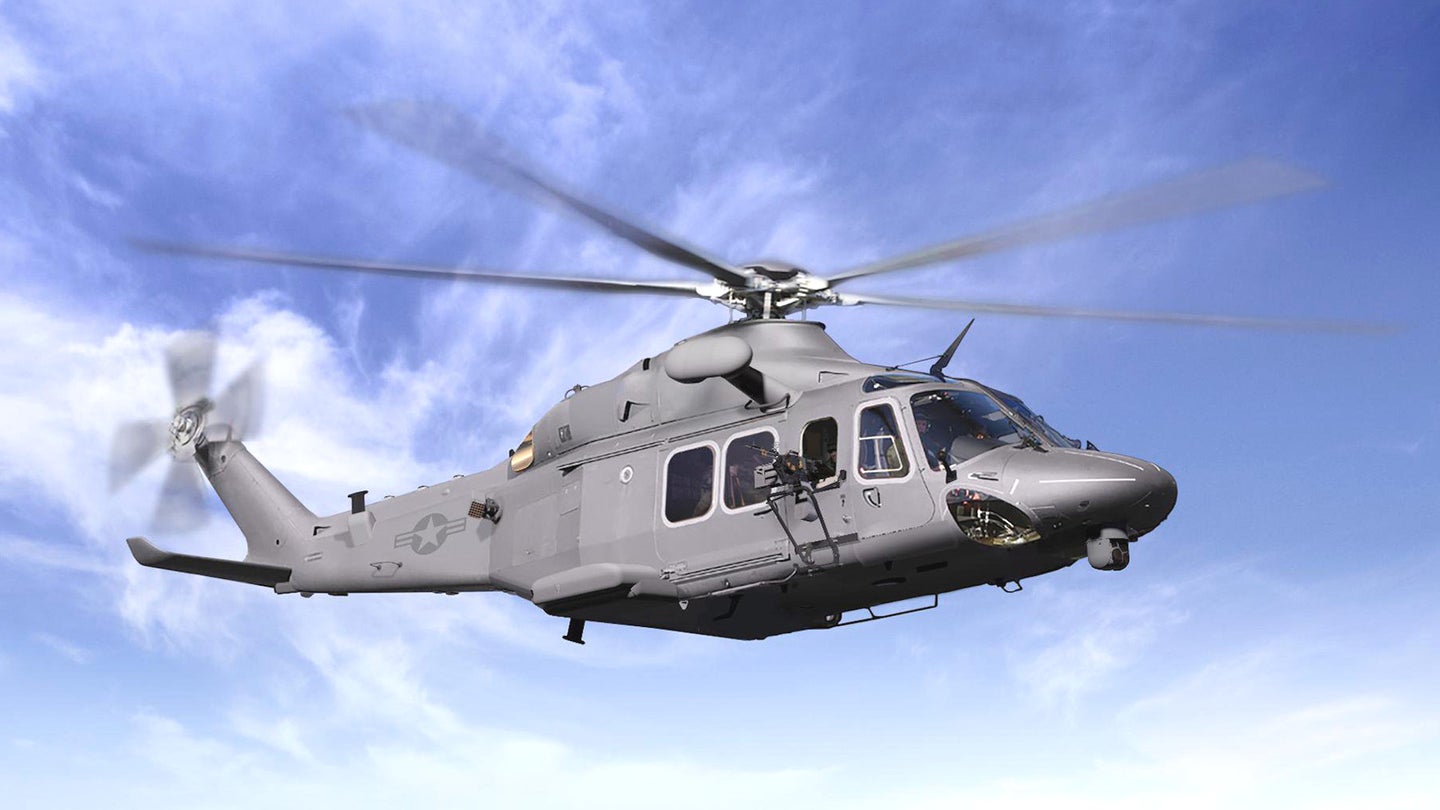 As the U.S. Air Force has begun testing and evaluating its new MH-139A Grey Wolf light utility helicopters it has found itself faced with at least one significant challenge. How do you ensure door gunners can adequately operate their weapons while exposed to extremely cold weather? The bulk of the MH-139As are set to replace UH-1N Twin Huey helicopters protecting intercontinental ballistic missile silos, many of which are situated in areas of the United States where the ambient temperature can drop well below zero in the winter.

Representative Don Bacon, a Nebraska Republican and a retired U.S. Air Force Brigadier General, raised the issue at a hearing on Mar. 10, 2020. The Air Force picked the MH-139A, a derivative of the Leonardo AW-139 helicopter that that Italian company is now building in the United States in cooperation with Boeing, in 2019. The first Grey Wolf arrived at Duke Field, part of Eglin Air Force Base in Florida, to begin the operational test and evaluation process last month.

Air Force Global Strike Command (AFGSC), which oversees the intercontinental ballistic missile (ICBM) force and will be the primary recipient of the MH-139As, is leading the effort at Duke Field. AFGSC, Detachment 7 stood up there to handle these activities last year.

"We're starting to deliver the MH-139A Grey Wolf helicopters and they have to have the capability to go to an ICBM site in case there's a force protection issue, so you have a door gunner," Representative Bacon said at the hearing. That's "alright in the summer, but in the winter up there as you know its like minus 30 and what I'm hearing is it's so cold that they can't operate the guns."

The standard configuration of AFGSC's MH-139As will include two 7.62mm M240 machine guns, one on each side of the helicopter. Though commonly referred to as door guns, these will actually be mounted in windows on the side of the fuselage between the cockpit and main cabin doors.

At present, to use the guns, door gunners would have to be standing in front of an open window, fully exposed to the weather outside. "At minus 30 [degrees Fahrenheit] it is hard to operate a machine gun with an open door," Bacon added.

The Congressman was specifically referring to the weather at ICBM sites belonging to the 91st Missile Wing, which is headquartered at Minot Air Force Base in North Dakota. It's unclear if Bacon had heard similar concerns from personnel supporting the missile fields that belong to the 90th across Nebraska and Wyoming or  341st Missile Wing's silos in Montana.

"We're aware of the weather conditions in Minot," Will Roper, the Assistant Secretary of the Air Force for Acquisition, Technology, and Logistics, told the Nebraska Representative in response to his questions. "I went up a year ago right before winter started and I was there on one of the warmest on record, so I did not get to experience the full Minot experience."

"Cold weather, primary challenge that has to be overcome," he continued. "We're working a variety of options, environmental options, clothing options, to try to mitigate that risk."

An environmental option could be a heating system in the helicopter or some sort of shield that allows the gunner to use their weapon, but keeps them warmer. Clothing options could simply be something like heavier coats, though Bacon also suggested the Air Force could look into gloves, or mittens with integrated hand warmers.

The issue, of course, is that any additional extreme cold weather heating system could add weight to the helicopter and bulk inside the cabin that might impact other capabilities. Heavier clothing, while it might keep a gunner warmer, could also restrict their movement and their ability to use their weapon. Protected or not, operating in very cold temperatures is just physically taxing, as well.

This is hardly a new concern for the Air Force, or the U.S. military, as a whole, when it comes to operating helicopters in extremely cold weather. In the early 1970s, the U.S. Army experimented with a kit to answer this same question with regards to UH-1H Huey helicopters operating in places like Alaska. That service had developed the door gun systems for all of its helicopters with the Vietnam War in mind, where the weather was significantly warmer and helicopters often flew with their doors off completely to help crews stay comfortable.

The proposed solution then was to install a secondary set of doors in the UH-1H's cabin, one on each side. This shielded passengers from the elements even when the main door was open, while leaving the gunner, wearing heavy clothing free to operate their weapon. Another door built into this "closure kit" also allowed the gunners to move into the main cabin even when the main doors were closed.

The Army did not adopt this configuration. It's not entirely clear why, but a final report on the project pointed out that the kit was not compatible with a separate supplemental internal heating system for the helicopter and made it difficult to load and unload casualties on stretchers from UH-1Hs tasked with casualty evacuation missions.

Today, Army UH-60 Black Hawks flying in extremely cold weather, such as those operating in Alaska, do not feature any specialized protection for door gunners, or the helicopter's other occupants, beyond traditional heavy clothing and supplemental cabin heating systems.

The Air Force itself only began arming its UH-1Ns with door-mounted M240 machine guns in recent years, as part of interim upgrades to improve their capabilities until new replacement helicopters arrived. It's very possible that AFGSC had declined to add these weapons in the past, at least in part, because of the weather considerations.

These issues aren't limited to the MH-139As supporting missile fields in North Dakota, either. The U.S. military as a whole is faced with the increasing likelihood that it will have to conduct operations in extreme cold weather environments, especially the ever more strategic Arctic region, in the future. Gunners on any kind of helicopter, as well as those on Marine and Air Force Osprey tilt-rotors, would be faced with the same predicament.

It will be interesting to see what steps the Air Force ultimately takes to mitigate this issue and whether the options it selects might find their way onto other U.S. military helicopters.