The Army expects the winning design will replace nearly half of its AH-64 Apaches, which are also Boeing products. 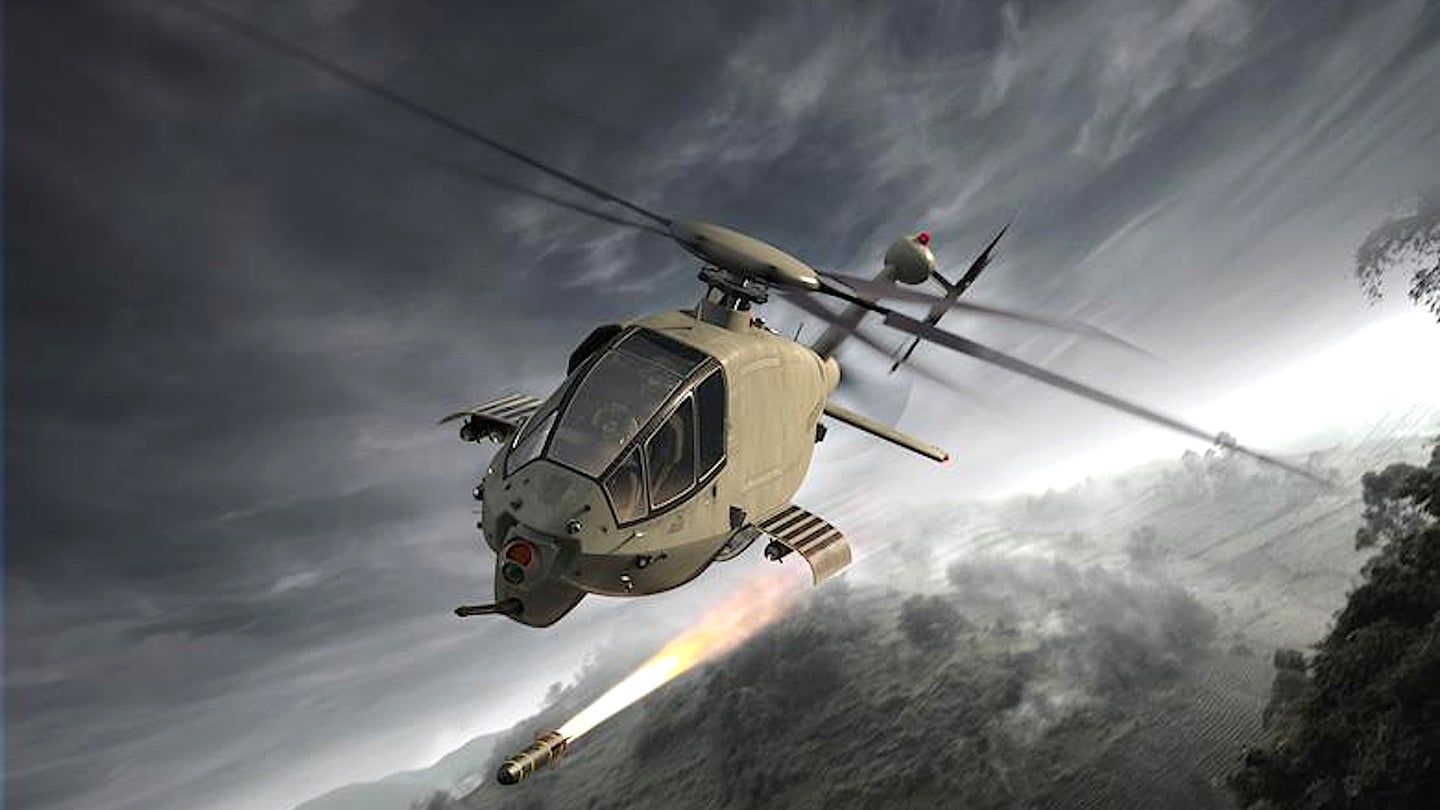 After weeks of teasers offering fleeting glimpses of the design, Boeing has finally revealed its entry for the U.S. Army’s Future Attack Reconnaissance Aircraft program, or FARA. This project aims to fill the gap left by the early retirement of the service's OH-58D Kiowa Warrior scout helicopters. The service plans to eventually replace nearly half of its AH-64 Apaches with the winner of the FARA competition, as well, making this effort particularly significant for the Chicago-headquartered aviation company, which makes those existing helicopters.

The new Boeing design, which the company does not appear to have its own name for at present, is a compound helicopter with a single six-bladed main rotor, a canted four-bladed tail rotor, and four-bladed pusher prop in the rear. A single General Electric T901 engine, with its air intake on the right side of the fuselage, is the primary source of power. The Army selected the T901 last year as the winner of its Improved Turbine Engine Program (ITEP) and the service plans to use it first to re-engine AH-64s and UH-60 Black Hawks.

“We’re offering more than a helicopter – we’re offering an affordable and fully integrated system for the Army, the mission and the future," Mark Cherry, the Vice President and General Manager of Boeing’s Phantom Works advanced design division, said in a statement on Mar. 3, 2020. "We’ve blended innovation, ingenuity and proven rotorcraft experience with extensive testing and advanced analysis to offer a very compelling solution."

"What we have here is a conventional helicopter configuration with a propulsor on the tail," Shane Openshaw, Boeing's FARA program manager, also told FlightGlobal. "So there’s a clutch in the drive train, behind the intermediate gearbox that drives the tail rotor, that adds the power to the configuration."

Openshaw further explained to FlightGlobal that configuration of Boeing's FARA entry would allow the helicopter "to maintain airspeed during maneuvers that would cause other helicopters to lose airspeed." The company says that its design will be able to meet the Army key performance requirement of being able to hit a top speed of 180 knots.

So far, Boeing has offered more limited additional details about its FARA design. The press release says that it includes "a modular, state-of-the-art cockpit with a reconfigurable large area display and autonomous capabilities." A pilot-optional capability, possibly with the ability to conduct semi-autonomous operations, has been a key Army requirement since the program began.

Internal munitions bays on either side of the lower fuselage, along with a 20mm rotary-barrel cannon in a turret under the nose and nose-mounted sensor turret are also visible in the newly released concept art. "The fly-by-wire design leverages more than 65 years of rotorcraft experience, proven advanced and additive manufacturing technology, and product commonality driving down risk and costs," Boeing added in its press release.

Boeing's FARA entry is the company's first clean sheet helicopter design since it partnered with Sikorsky to develop the stealthy RAH-66A Comanche in the 1990s. The RAH-66A was supposed to replace the Army's OH-58s, but the service canceled that program in 2004 amid delays and cost increases. A number of subsequent efforts to supplant the Kiowa Warriors also failed before the decision was made to simply retire them without a direct replacement in 2014.

The FARA design may have some stealthy features, but that clearly wasn't the primary design driver, which it was with Comanche. The general cockpit and fuselage shape are also somewhat reminiscent of McDonnell Douglas' Light Helicopter Experimental (LHX) concept, which it developed together with Bell during the 1980s. Boeing merged with McDonnell Douglas, which was also the original developer of the AH-64, in 1997.

However, the LHX concept had a thrust-vectoring anti-torque system in the tail boom, similar to Hughes Helicopters' No-Tail Rotor (NOTAR) system, rather than a traditional tail rotor. McDonnell Douglas had acquired Hughes Helicopters in 1984. The LHX design also lacked a pusher prop.

In many respects, Boeing's design is closest in general configuration to that of Lockheed's Cold War-era AH-56 Cheyenne. The Army canceled that project as a result of a mix of mishaps, technical problems, and political machinations, in 1972.

Boeing has also been experimenting recently with a compound derivative of the AH-64, which would also feature a single main rotor and a traditional tail rotor coupled with a pusher prop. The design concept also featured extended stub wings for an added boost in lift at higher speeds, something the company's FARA proposal notably lacks, at least in its present configuration.

When it comes to Boeing's new FARA entry, the fly-by-wire system promises to make it more docile. This, in turn, should allow it to do things its predecessors in similar configurations simply couldn't.

Boeing's FARA design also seems aimed at offering a lower cost, lower risk alternative to some of the other competitors. Among the current entrants, it sits somewhere between the complexity of Sikorsky's advanced Raider X compound helicopter and the greater simplicity offered by Bell's traditionally configured Invictus.

The Army hopes to pick designs from two companies to advance to the next stage of the FARA program by the end of this month. After the downselect, the service is looking to begin testing actual prototypes by 2023 and begin fielding the final design it picks by 2028.

Right now, Boeing is competing against Bell, Sikorsky, a team consisting of AVX Aircraft and L3, and another one that includes Karem Aircraft, Northrop Grumman and Raytheon. The company has secured a number of significant military contracts in recent years, including the deal to build the U.S. Navy's future MQ-25 Stingray drone tanker, the contract to build the U.S. Air Force's new T-7A Red Hawk jet trainer, in cooperation with Saab, and the winning bid to supply new MH-139 Grey Wolf helicopters, in partnership with Italian firm Leonardo, to replace the Air Force's aging UH-1N Twin Hueys.

As noted, for Boeing, the FARA competition is extremely important since the winning design is set to fundamentally alter the structure of the Army's armed helicopter fleets for years to come and is directly tied to the divestment of AH-64s, one of the company's flagship products. The company does stand to lose the most of any of the competitors, but also has the benefit of decades of close cooperation with the service through the Apache program.

We will undoubtedly be hearing more about Boeing's submission soon as the service gets closer to picking just two designs to go head-to-head for the final contract.