The Pentagon says that it is working to mitigate these issues, but it's unclear how severe their impact could be if the virus' spread accelerates. 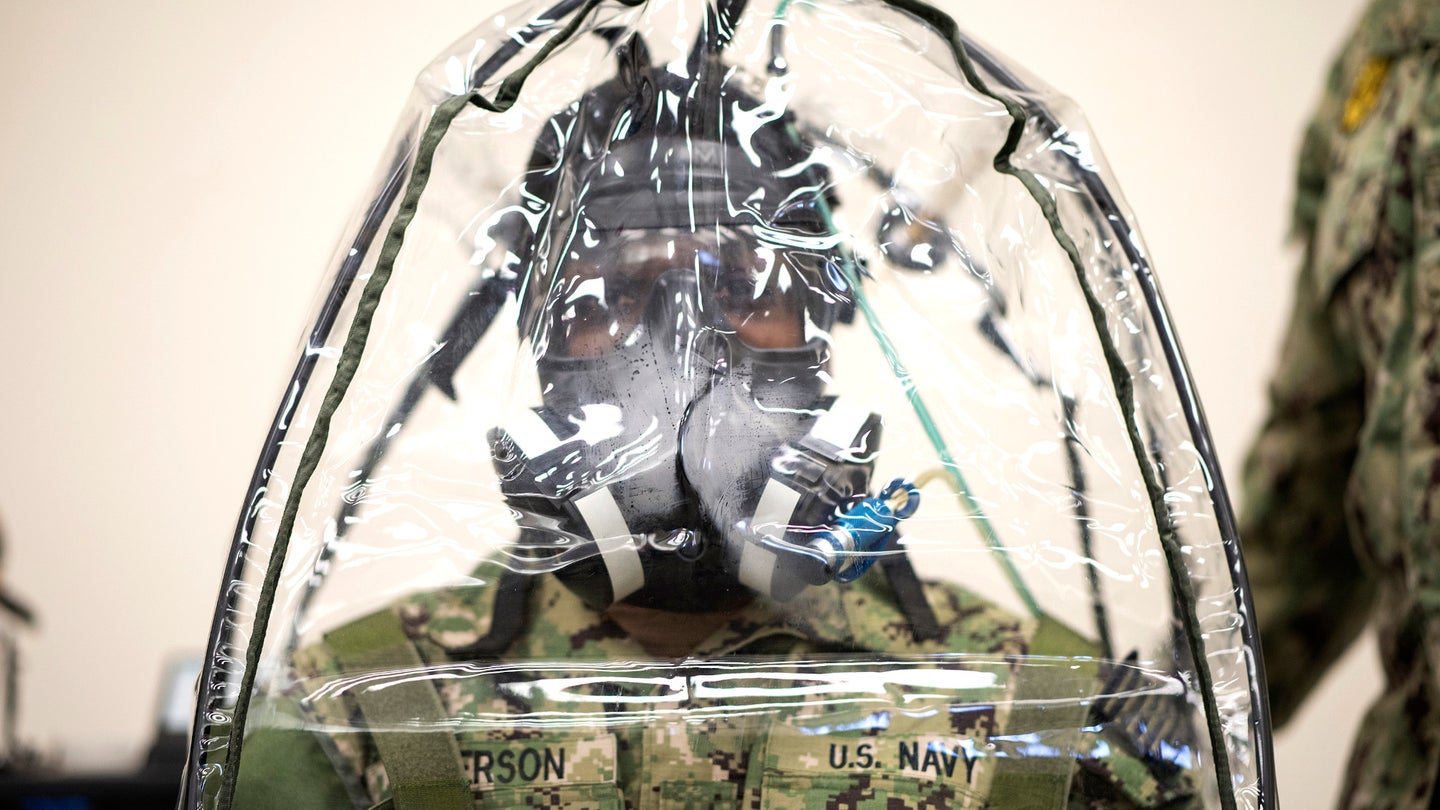 Top Pentagon officials have said that the fallout from the spread of the COVID-19 novel coronavirus has not impacted U.S. military supply chains, but there are growing concerns that it could in the near future. Worries about what it could do the readiness of American forces abroad and at home are mounting as the virus continues to spread around the world, including inside the United States, where it has now caused six deaths and infected dozens more.

On Mar. 2, 2020, Chairman of the Joint Chiefs of Staff U.S. Army General Mark Milley told reporters during a press conference that there had been no such disruption, yet. However, the same day, Representative Mac Thornberry, a Texas Republican and the ranking member of his party on the House Armed Services Committee, highlighted the seriousness of this potential issue during a talk at the Brookings Institution think tank in Washington, D.C.

"It's not just civilian businesses that are dependent upon products and components that come from China," Thornberry noted. "To the extent … economic commerce is threatened, then, of course, it could relate to defense weapons and equipment."

Members of Congress, as well as the Pentagon itself, have been ringing alarm bells about the various risks posed by heavy dependence on China in the U.S. military's supply chain, both for raw materials and processed goods, in general. A particular area of concern has been Chinese dominance in the extraction of rare-earth metals that are critical to the production of various modern electronic devices, including communications systems and computers. Efforts to find alternative sources of rare-earth metals, as well as otherwise reduce reliance on exports from China, are still very much in their infancy.

These concerns are now much more apparent with the potential cascading impacts of slowed production in and exports from China due to COVID-19. Manufacturing output in the impacted areas of that country, such as Wuhan, where the virus first emerged in December 2019, has decreased so much, space-based sensors have noticed a near-total drop in pollution in the city.

It is very possible that the impacts of this slowdown simply have yet to be felt by businesses in the United States given the availability of existing supplies of various items in the chain. Supply chain concerns extend beyond resource extraction and production, and include possible disruptions in the transportation of items to their intended destinations, as well.

It's not hard to see the potential problems that the U.S. military could experience from a sudden lack of availability of a wide array of resources and processed items across supply chains. This would not necessarily be limited to military-specific items, such as weapon systems or ammunition, but could also impact the availability of critical day-to-day items, including food, water, fuel, and especially medicine and medical supplies.

As COVID-19 spreads, these concerns will not stay limited to China, or even other foreign countries, especially if portions of the United States experience prolonged quarantine periods. At the time of writing, as of Mar. 2, the U.N. World Health Organization had confirmed 8,774 cases of the novel coronavirus in 64 countries outside of China. The WHO had counted 128 deaths in those nations.

Both tallies are growing, especially as more people get tested, and these figures did not include six deaths in the past two days in the United States. All of those fatalities have been in Washington State, but cases of COVID-19 have spread well beyond that state. Per the U.S. Centers for Disease Control and other official medical sources, there are at least 100 confirmed cases across the United States.

So far, worldwide, the mortality rate for COVID-19 has been relatively low, but individuals who catch it can take weeks to recover, especially in severe cases that require hospitalization. Even if two percent of those who contract the virus die – two percent of the U.S. population, estimated to be around 330 million at present, is 6.6 million – even a fraction of this number could easily be a significant figure and the total number of people incapacitated could be higher still.

Massive disruption in the U.S. military's supply chain could directly impact the readiness of American troops, abroad and at home, to respond to crises, including fallout from the spread of COVID-19. The United States has already canceled one scheduled exercise with South Korea forces due to the rapid spread of the virus in that country.

The U.S. military first case of COVID-19 was actually confirmed in a servicemember on a base in South Korea. On Feb. 1, U.S. Forces Korea, the top American command on the Peninsula, had already instituted various measures to try to mitigate the possible spread of the virus, including mandatory self-quarantine for 14 days for any individual returning from travel to China.

On Feb. 28, the Navy's 7th Fleet, which is forward-deployed in Japan, has also seen a steady increase in COVID-19 cases, confirmed that it instructed all of its ships at sea to keep sailing for at least 14 days and to monitor for any signs that sailors might have contracted the virus. U.S. Central Command, which has an area of responsibility that includes Iraq, Lebanon, and other countries where U.S. personnel are based and the novel coronavirus is spreading, has instituted various restrictions on the movements of its personnel, as well.

"We've issued a variety of memorandums and directives advising the force on how to deal with coronavirus," U.S. Secretary of Defense Mark Esper told reporters alongside Chairman of the Joint Chiefs of Staff General Milley at the press conference on Mar. 2. "At the end of the last week, I did a deep dive with DoD civilian and military leadership, including all the service secretaries ... to ensure the entire department is equipped for all scenarios short- and long-term, domestic and international."

There are limited details on exactly what steps the U.S. military has taken or plans to take with regards to supply chains and readiness, but it could include stockpiling of various items and contracting with domestic companies to ramp up production of certain products. As of last week, the U.S. government was already reportedly considering using the emergency powers available under the Korean War-era Defense Production Act to boost domestic production of protective clothing and masks, according to Reuters.

"We have more than 40 million masks available today. We’ve contracted now with 3M. Thirty-five million more masks per month will be produced, and we’re also going to be working with other manufacturers," Vice President Mike Pence said at a press briefing on Feb. 29, but did not mention the Defense Production Act or supplies for the U.S. military specifically. "The Assistant Secretary for Preparedness and Response will be announcing today courses of action to increase the availability of masks, as well as prioritizing availability to high-risk healthcare workers, modifying guidance, and developing a whole-of-nations communications plan."

Still, even if the Pentagon mitigates the supply chain issues, thousands or hundreds of thousands of U.S. servicemembers sidelined due to catching the virus could have serious impacts on available forces to respond to potential crises around the world, which there are no shortage of at present. The need for individuals who might have been exposed COVID-19 to be quarantined in some fashion, including self-quarantine, even if they do not develop symptoms, means that these disruptions could readily occur even if the actual spread of the virus within the U.S. military ends up being low.

While physical fitness and certain other things can be attended to under these constraints, advanced skill sets, such as flying planes, sailing ships, and operating other advanced systems, and preparedness for deployment on short notice, could suffer. Beyond simply impacting potential deployments, for contingency or other purposes, this could also prevent the scheduled rotation of forces already overseas back to the United States, forcing units to remain in place longer than expected. This could have its own cascading impacts on readiness, in general, as well as the training of new personnel.

This may be true now, but it's unclear how long these conditions might last. Thankfully, the U.S. military does appear to be taking the situation seriously and will hopefully be able to take the steps necessary to mitigate any supply chain and readiness issues as much as possible while the spread of COVID-19 continues.