The nickname originally referred to the “green footprints” the older rescue helicopters would leave when they landed in the fields of Vietnam. 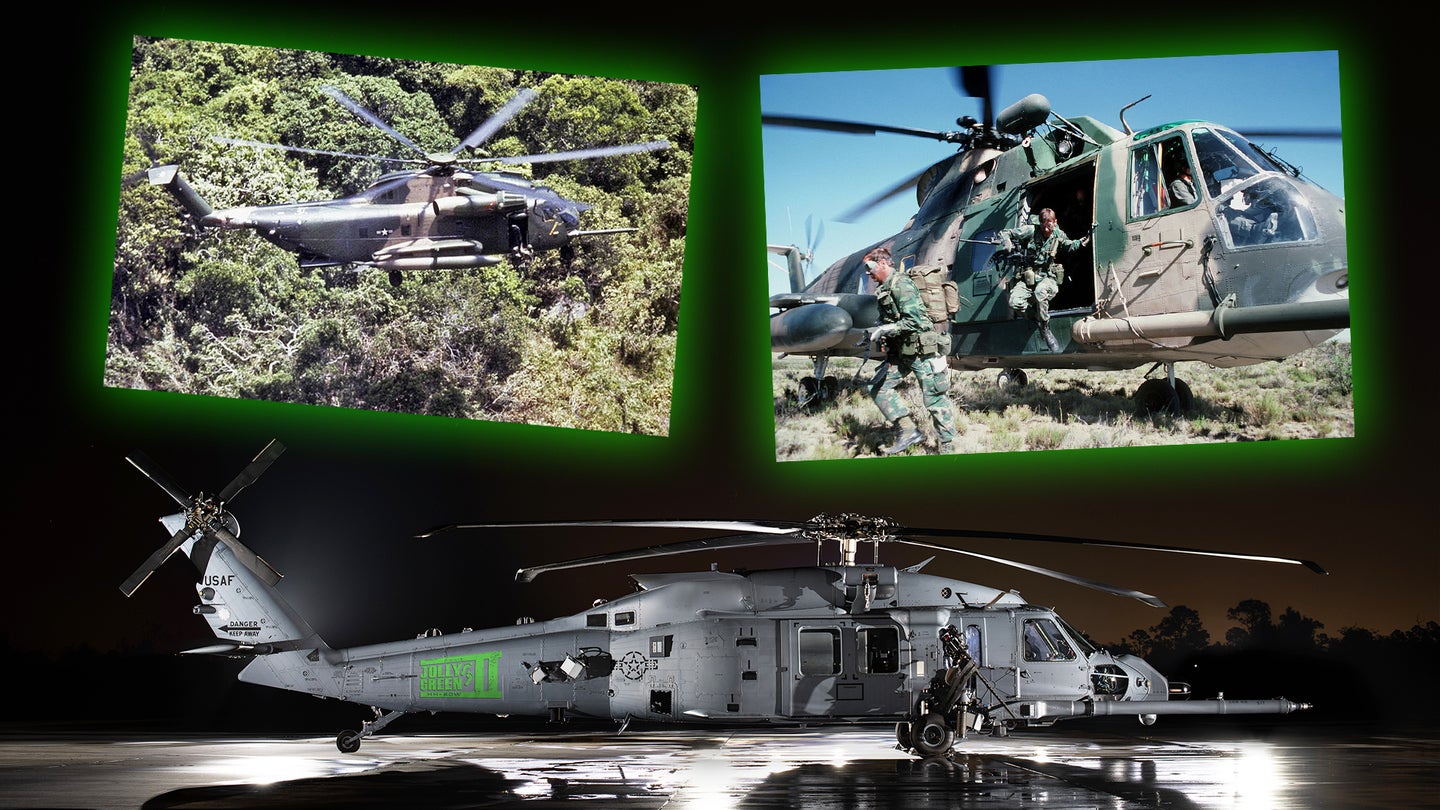 The U.S. Air Force has officially nicknamed its new HH-60W Combat Rescue Helicopters as Jolly Green IIs. This moniker is a direct reference to the Vietnam War-era HH-3E Jolly Green and HH-53B/C Super Jolly Green combat search and rescue helicopters that saved the lives of countless downed American aircrews during the conflict in Southeast Asia.

Secretary of the Air Force Barbara Barrett announced the HH-60W's new name at the Air Force Association’s 2020 Air Warfare Symposium in Orlando, Florida on Feb. 27, 2020. The Air Force first hired Sikorsky, now a part of Lockheed Martin, to develop the Combat Rescue Helicopter (CRH), which is a derivative of the U.S. Army's UH-60M Black Hawk, in 2014. The HH-60W flew for the first time in 2019 and the Air Force awarded the first low-rate initial production contract for 10 helicopters that year. Sikorsky recently received a second contract low-rate production contract for 12 more Jolly Green IIs, valued at approximately $500 million.

As recently as January, the service's public plan had been to purchase up to 113 of these helicopters to replace all of its existing HH-60G Pave Hawks. It now says that it will only acquire up to 108 of the Jolly Green IIs.

"Reviving the Jolly Green name honors our combat search and rescue crews past and present. Those who operate this aircraft will embody the motto, ‘These Things We Do, That Others May Live,’" Barrett said. "In the hands of our Airmen, this aircraft ensures the rescue community can perform their duties better than ever."

"Performing combat search and rescue and personnel recovery operations for the joint force is what the HH-60W is built to do," Air Force Chief of Staff General David Goldfein added. "The Jolly Green II gives us extended range and better capability."

Goldfein has a very personal perspective on the value of combat search and rescue capabilities. In 1999, a Serbian S-125 surface-to-air missile system shot him down while he was flying an F-16C Viper fighter jet over that country as part of Operation Allied Force. He ejected and was subsequently rescued by a NATO combat search and rescue helicopter.

Retired U.S. Air Force Colonel Barry Kamhoot and retired U.S. Air Force Chief Master Sergeant Wayne Fisk were also present at the ceremony. Kamhoot was one of the first HH-3E pilots and also flew HH-53B/Cs during the Vietnam War, becoming "a trailblazer within the rescue community," according to the service.

Fisk is credited with being the first to unofficially nickname the HH-3Es "Jolly Green Giants" because of the "green feet" the helicopter's tandem landing gear wheels would leave in the grass when they touched down to make rescues. The moniker was also a reference to the well-known mascot of the Green Giant frozen food brand. The HH-3Es eventually officially received the name "Jolly Green" and the HH-53B/Cs became "Super Jolly Greens."

These nicknames also helped identify them as unique variants distinct from their Navy and Marine Corps cousins. The Air Force's earlier CH-3C/E helicopters were technically nicknamed Sea Kings. This was because they were derivatives of Sikorsky's original S-61 design, which the Navy had first adopted a variant of as the SH-3A Sea King. Similarly, the Navy and Marine Corps were first to adopt variants of Sikorsky's larger and more powerful H-53 series, nicknaming them Sea Stallions, which carried over to the initial examples that the Air Force acquired.

The Air Force chose to use developmental program names as the official nicknames for the combat search and rescue helicopters that followed, the HH-53 Pave Lows and HH-60G Pave Hawks. The Pave Lows were heavily employed for special operations missions, as well, and were redesignated as MH-53s before their retirement in 2008, at which time they were replaced by CV-22B Osprey tilt-rotors.

It's also interesting to note that the HH-60W is the first H-60 derivative to not use "Hawk" in its official name.

The effort to replace the HH-60Gs, the first of which entered service in the 1980s and which are in increasingly desperate need of replacement, has been a saga that you can read about in more detail in these past War Zone stories. In the interim, the Pave Hawks have continued to provide valuable combat search and rescue support for U.S. military operations around the world.

The ceremony where the Jolly Green II name was announced also served as an opportunity to honor personnel from the 41st and 48th Rescue Squadrons who had rescued four American special operators and two members of an unspecified partner force during an operation somewhere in East Africa. Two HH-60Gs, using the call signs Jolly 41 and Jolly 42, had taken part in that mission.

Though the Air Force described this operation as "recent," the description it offered matches many the known details about a rescue mission in Southern Somalia in 2018. You can read more about that incident in this past War Zone story.

"Our combat search and rescue force saves lives on the battlefield and during natural disasters," U.S. Air Force General Mike Holmes, commander of Air Combat Command, also said after the announcement of the HH-60W's new name. "The HH-60W Jolly Green II will ensure our rescue professionals continue to succeed."

The Air Force is continuing to test and evaluate the HH-60Ws and is hoping to field the first operational examples this year.