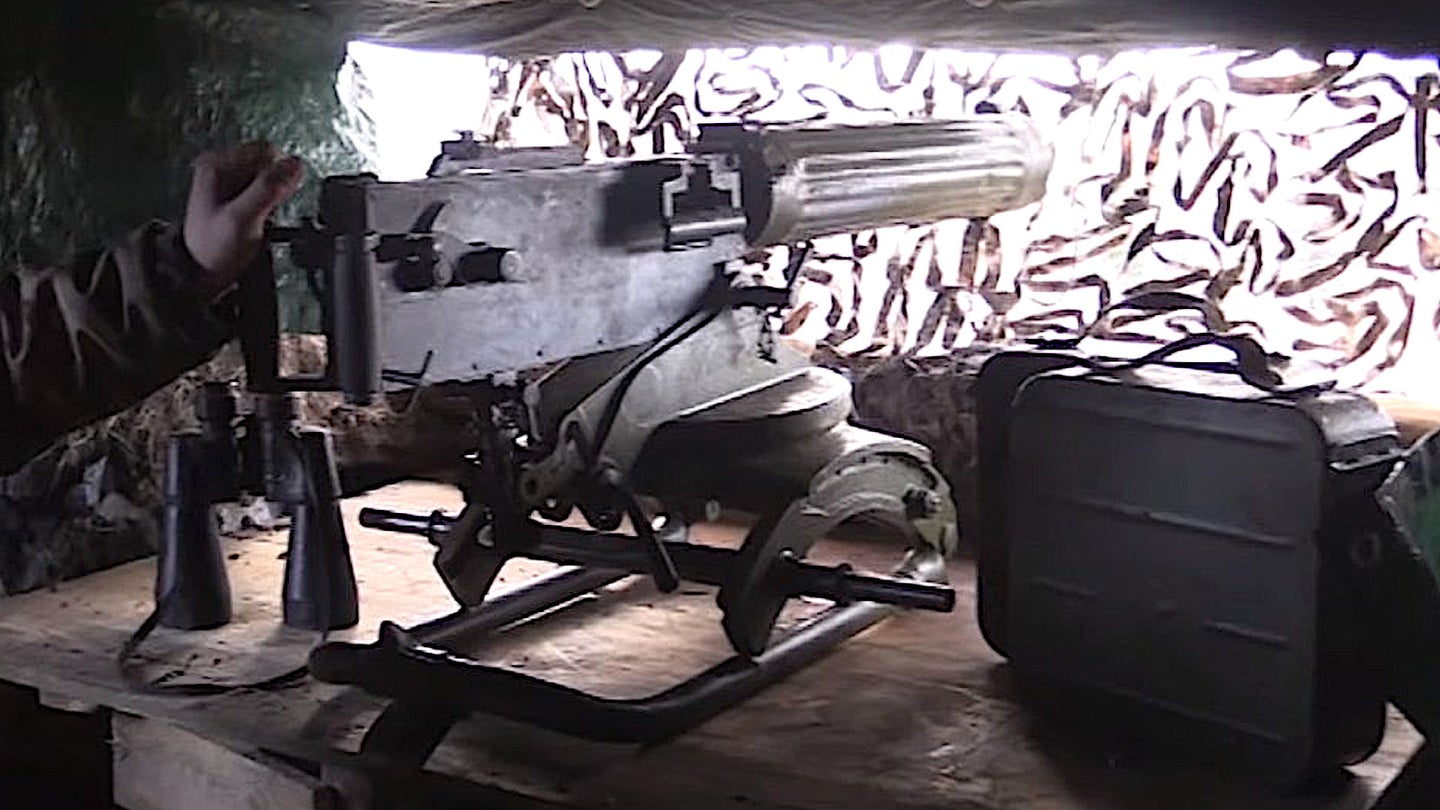 Six years after Ukraine first found itself embroiled in armed conflict with Russia and its proxies, the country continues to rely heavily on stocks of Soviet-era aircraft, vehicles, weapons, and other military equipment, derivatives thereof, or newish designs that leverage those existing resources in some way. In one particularly extreme example, a recent video clip from the front lines shows that the Ukrainian military is still actively using the M1910 Maxim machine gun, a design that predates World War I.

The video, which originally aired as part of a segment on Ukraine's Channel 5 television network and has been circulating on social media since at least Jan. 31, 2020, shows a member of the Ukrainian armed forces manning the M1910 machine gun in an unspecified location in the country's Luhansk Oblast. Luhansk is one of the Ukrainian regions that declared itself to be an independent republic in 2014 following Russia's illegal seizure of the Crimean Peninsula and the beginning of the Kremlin's support for nominally local separatist forces in the eastern part of Ukraine. Luhansk, together with Donetsk, form a region known as the Donbass, which has been the epicenter of the conflict ever since.

This actually isn't the first time images of an M1910 in use in Ukraine have emerged. In 2016, Ukraine's TSN news network released a video of another one of the Maxim guns still in service with the country's armed forces.

The Russian M1910 is a direct descendant of Hiram Maxim's eponymous machine gun, which was the first weapon of its kind to see widespread production and use, beginning in the mid-1880s. Variants of the then-revolutionary gun quickly found their way onto battlefields around the world and were license-produced in a number of countries, including Imperial Russia under the Tsar.

The M1910, which first entered service in 1910, is a water-cooled gun that features a large hollow jacket around the barrel that is regularly filled with water to keep it from overheating during sustained fire. This variant also fires the standard Russian 7.62x54mm cartridge, the first versions of which entered Imperial Russian military service in 1891. After 129 years, this remains the oldest basic cartridge design still in widespread military use and Russia today is still producing new guns chambered to fire the latest variations of this relatively ancient ammunition.

Russian Maxims served in both World War I with the Tsar's forces, then on both sides of the Bolshevik Revolution and ensuing Russian Civil War, and with the Soviet military during World War II. Though the Soviets began replacing them with newer SG-43 machine guns in 1943, the M1910 remained in production until 1945, with a number of general refinements being added to the design over the years.

It's not clear what particular M1910 variant is seen in the recent video from Ukraine, but it notably lacks the later so-called "tractor cap" on top of the cooling jacket, which was added to many of the guns, such as the one in the video below, beginning sometime between 1941 and 1943. The gun seen in the video clip from 2016 does have this feature.

This large cap allowed machine gun teams to fill the jacket with snow, as an alternative to water, which would freeze during Russia's frigid winters. It's also worth noting that even if the gun seen in the video from Ukraine was among the very last M1910s produced in the Soviet Union, it would still be 75 years old.

M1910s of various types remained in reserve storage in the Soviet Union for decades and were also widely exported to Soviet allies and partner forces. It's perhaps not surprising that some would still be in depots in Ukraine, which most recently gained independence after the collapse of the Soviet Union in 1991.

As long as the gun itself works, there aren't any real hurdles to using it, either. As noted, it uses standard 7.62x54mm ammunition, which remains in production in Ukraine and Russia, among other countries, more than a century after it was first introduced. Subsequent Soviet machine gun designs also continued to use interchangeable cartridge belts to further reduce logistical demands. This particular Ukrainian M1910 appears to be loaded with ammunition using a belt from a much more modern PK-series machine gun.

There may even be some benefits to employing the Maxim over more recent designs. The video shows it positioned in a fixed machine gun nest, where a water-cooled gun, which can fire indefinitely without overheating so long as the cooling jacket is regularly topped up and nothing physically breaks, could actually be an ideal choice.

At the same time, it also shows how deep Ukraine has had to dig to source additional weapons and other military equipment while it faces down one of the world's largest armies and its proxies. Whatever the case, that this M1910 is still serving in any capacity at all is both a testament to the design of Maxim's gun and Russia's 7.62x54mm cartridge.

With the conflict in Ukraine, unfortunately, not looking like it will be ending any time soon, it's possible that this gun, already at least 75 years old, still has years of service left ahead of it.