The Army is only planning to upgrade a fraction of its Bradleys with the auxiliary power units necessary to run the defensive systems. 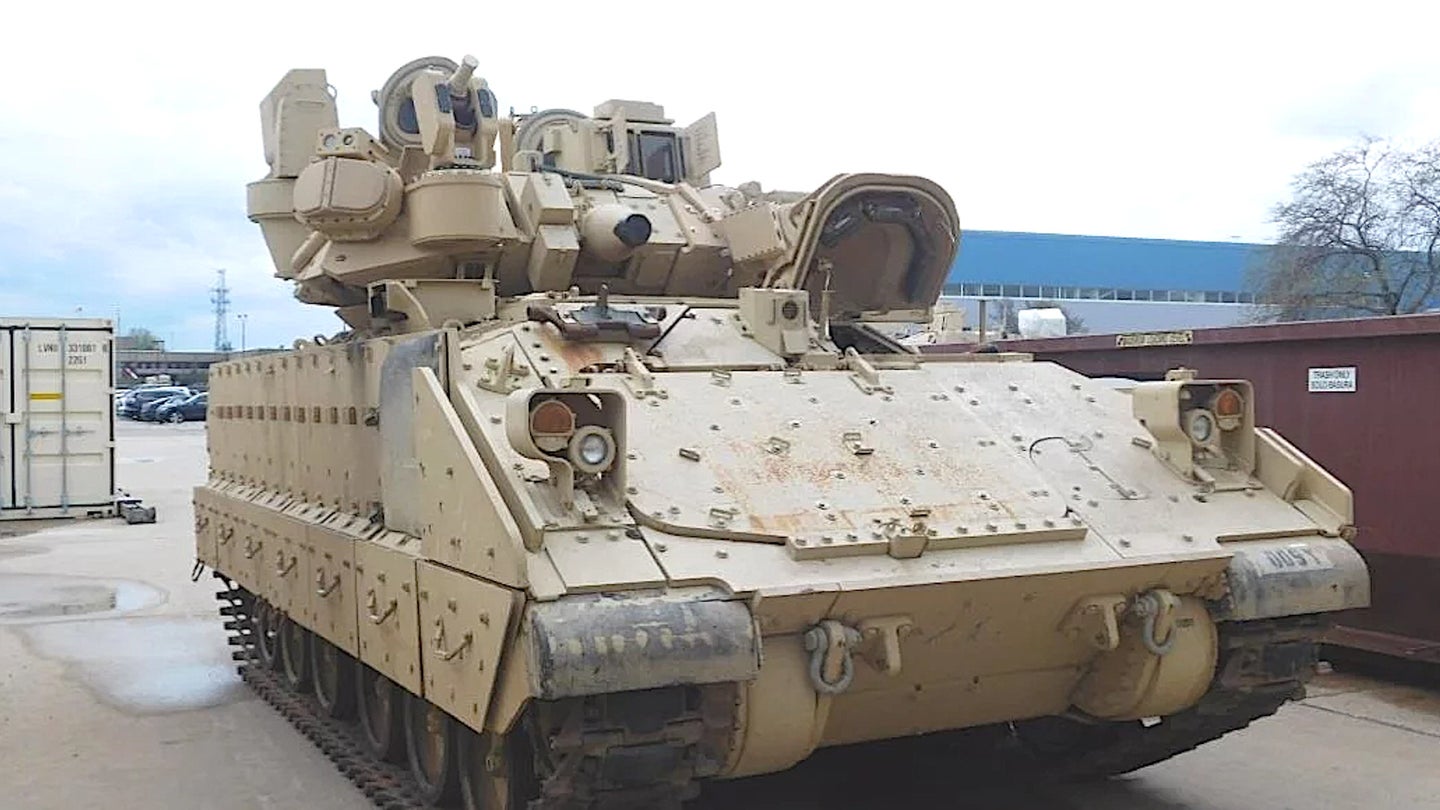 The vast majority of the U.S. Army's Bradley Fighting Vehicles cannot be fitted with a new Israeli-made active protection system for one simple reason, they cannot generate enough power to operate it. The service is in the process of upgrading a number of Bradleys to a new configuration with an auxiliary power unit that will enable them to carry the Iron Fist Light system. At present, however, it expects to leave most of these armored vehicles in their existing form in favor of developing an all-new replacement design, a program that has recently hit major hurdles, leading to the cancellation of a planned competition.

The Pentagon's Office of the Director of Operational Test and Evaluation, or DOT&E, revealed the power generation issues in its annual report on the progress of various high-profile U.S. military procurement programs during the 2019 Fiscal Year, which ended on Sept. 30, 2019. The Army had first announced that it had picked Israeli defense contractor Elbit's Iron Fist Light as its choice for a new active protection system for its Bradleys in December 2018.

"The fielded Bradley A3 does not generate sufficient power to operate the APS," DOT&E states bluntly in its report. "The Bradley A4 power components, currently under development, can support this APS solution."

The Army has been actively working to add active protection systems to all of its major armored vehicle platforms, such as the Bradley, the M1 Abrams tank, and the Stryker family of wheeled vehicles, in recent years. The ever-growing threat of anti-tank guided missiles, as well as advanced shoulder-fired infantry anti-tank weapons, is the primary driver behind these efforts. The service is particularly concerned about how vulnerable these vehicles might be to these types of weapons in major conflict as a "great power" competitor, such as Russia.

At the same time, these advanced anti-tank missiles and other anti-tank weapons are increasingly proliferating to smaller militaries and even non-state actors, making them a near-universal challenge for U.S. military mechanized operations. Anti-tank guided missiles have been a major factor in the conflict in Syria over the years. Last year, the Army briefly deployed Bradleys to help protect oil and gas fields in Eastern Syria.

Active protection systems come in many forms and Iron Fist Light falls into the so-called "hard-kill" category. This means that the system employs small radars and infrared cameras to spot incoming missile or rockets. It then fires a shotgun-like burst of projectiles at the threat to destroy it.

Israel has been a pioneer in the development of such systems, with Rafael's Trophy system being among the best known given its good record in actual combat service with the Israel Defense Forces. The U.S. Army has already begun installing Trophy, which functions similarly to Iron Fist Light, on its M1 Abrams tanks.

The integration of Iron Fist Light onto the Bradley had reportedly experienced separate technical and other problems beyond the power generation issue. "Phase I demonstrated an inconsistent capability of the Iron Fist APS to intercept threats largely due to countermunition dudding and power failures to the launcher," DOT&E explained in its review.

"It is not a secret that the Iron Fist was allocated for the Bradley ... and the whole process was delayed," Dov Sella, the CEO of RADA, a subcontractor working for Elbit, told Jane's 360 in August 2019. "At the end of last year, the U.S. Army decided to continue with Iron Fist and gave a time frame of about 9 [to] 10 months to sharpen the needles, tighten up all loose ends, and come back to testing with a more mature system."

Those issues have reportedly been resolved. However, this doesn't mean that the majority of Bradleys will necessarily receive the new defensive system in the future.

The Bradley Fighting Vehicle family has two primary variants, the M2 Infantry Fighting Vehicle and the M3 Cavalry Fighting Vehicle, which differ mainly in their internal configuration to support the mechanized infantry and cavalry scout roles, respectively. A number of other more specialized variants have entered service over the years, such a the M7 Bradley Fire Support Team vehicle, or BFIST, which is configured to provide an armored platform to support forward observers. At present, the Army has around 4,500 M2 and M3 Bradleys spread among its units, including those in the Army National Guard, as well as another approximately 2,000 in storage, according to The International Institute for Strategic Studies' The Military Balance.

BAE Systems, the Bradley's present manufacturer, has been working on the new A4 configuration for the Army since 2012. The most significant component of the upgrade plan is the auxiliary power unit, together with a modified hull to accommodate it, which the service specifically asked for in order to support plans to add in additional networked communications equipment, more powerful sensors, and other systems, such as Iron Fist Light. The various different Bradley variants that go through the update process will all be designated as A4 variants, such as the M2A4, M3A4, and M7A4.

The Army's present plan is only to upgrade four armored brigades' worth of Bradleys to the new A4 configuration, according to DOT&E. As of October 2019, the service had only contracted with BAE to bring 641 vehicles – less than 15 percent of the total number of Bradleys in service now –  up to the new standard. The hope is that the first of these vehicles will be ready for combat operations sometime in the 2021 Fiscal Year, which begins on Oct. 1, 2020.

The plan is to make these upgraded Bradley available to units in need, rather than having them permanently assigned to specific brigades. One of these so-called "brigade sets" of the updated armored vehicles will be permanently situated in Europe. Still, with only four brigades worth in total, the Army will still only have limited numbers of versions equipped with active protection systems to distribute anywhere and to keep in reserve to replace vehicles that suffer serious break downs or are lost in combat.

As noted, the existing A3 variants do not generate enough onboard power to adequately run Iron Fist Light, so there would be no way to readily integrate the active protection system onto earlier versions. This could also limit the ability of those Bradleys to accept other updates to their communications and data sharing capabilities or the addition of new sensors or other equipment in the interim.

This decision to only acquire a limited number of A4 variants appears to have been, at least in part, the result of the belief that the upgraded Bradleys would only ever be something of an interim vehicle to bridge the gap between the A3 versions and the fielding of the future Optionally Manned Fighting Vehicle (OMFV), which will also feature an active protection system of some type. The Army wants to ultimately replace all of its Bradleys with whatever design it picks under the OFMV program, which you can read about in more detail in this past War Zone piece.

The service has been pursuing an increasingly aggressive schedule for that new effort, while also scaling back Bradley upgrade plans, including scrapping development of a further improved A5 configuration. It's not clear if all the work related to that effort has completely come to a halt, though. In January 2020, the Army showed off an experimental Bradley with a new high-mobility, variable-height, hydro-pneumatic suspension system.

“The vehicle itself is still on the drawing board," Mark Schauer, a spokesperson for Army Test and Evaluation Command at Yuma Proving Ground, told KYMA television, a local CBS affiliate in the Yuma, Arizona area. "But we’re testing components that may be used in future vehicles."

Unfortunately, the OMFV program has run into its own troubles and canceled plans for a competition in January 2020 after only one bid met its requirements. The Army has now said it will reexamine its requirements and then issue a new call for proposals.

"The most prudent means of ensuring long-term programmatic success is to get this multi-billion-dollar effort correct," U.S. Army General John M. Murray, head of the service's Futures Command, said at the time of the cancellation. "We are going to take what we have learned and apply it to the OMFV program to develop our path and build a healthy level of competition back into the program."

The Army has said it wants to begin actually replacing Bradleys with the final OMFV design in 2026. Even if the service meets that schedule, it will take time to replace the thousands of Bradleys now in service.

Any delays in the OMFV program can only mean that the Bradley family of vehicles will remain in service that much longer. This, in turn, could push the Army to have to reconsider whether it makes sense to operate thousands of those armored vehicles that are incapable of accepting new defensive equipment for years to come.