The British Army has modified a Challenger 2 to be ideally suited for fighting tomorrow’s wars in megacities. 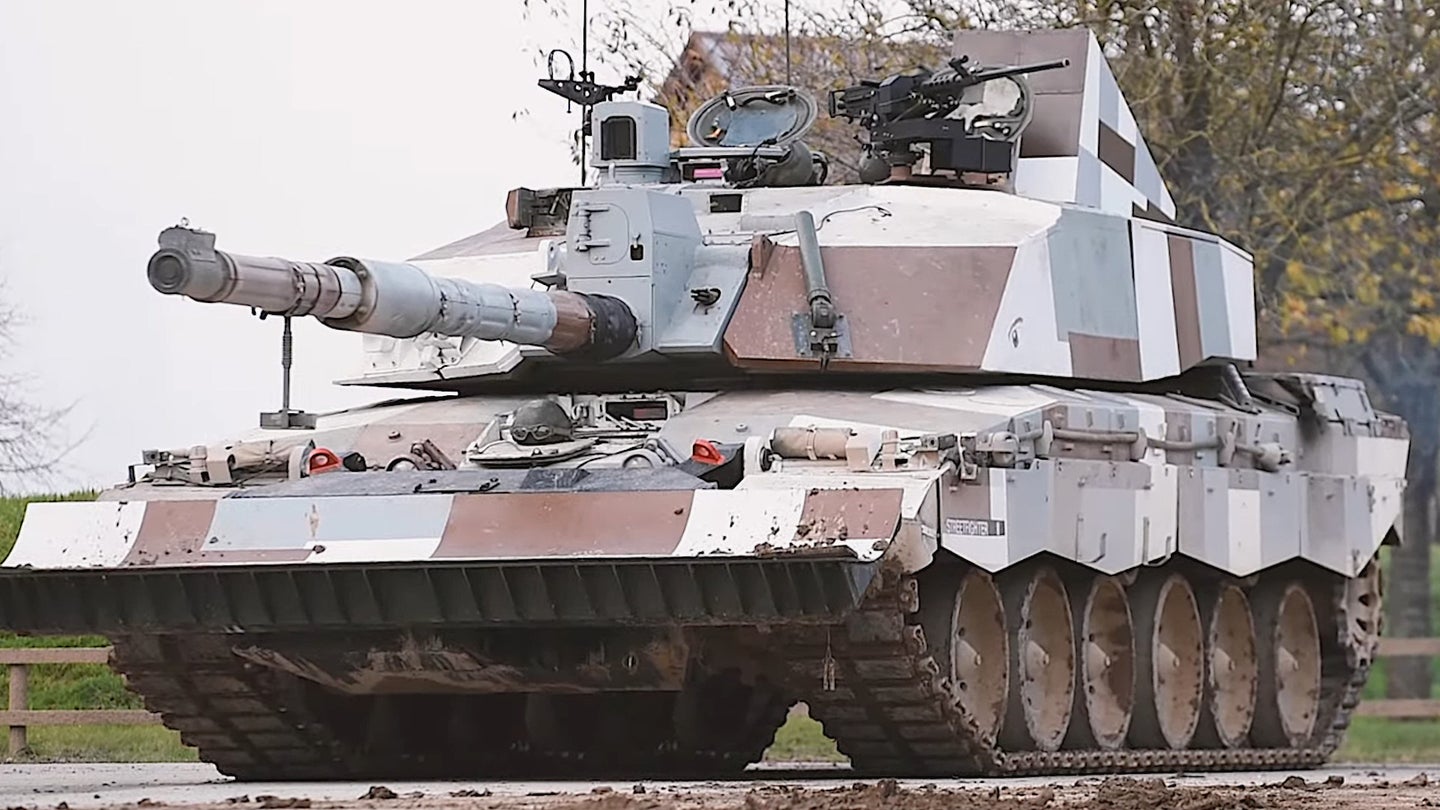 The British Army recently showed off a new concept for a Challenger 2 main battle tank optimized for urban operations, dubbed Streetfighter II. The vehicle has an Israeli-made IronVision distributed vision system, which allows the crew to see in all directions even while riding inside with all the hatches closed and a mock-up of a launcher for the increasingly popular Brimstone anti-tank missile on top of the turret.

Elements of the Royal Tank Regiment evaluated the Streetfighter II tank during exercises at Copehill Down earlier in January 2020. Copehill Down is one of the facilities within the U.K. Ministry of Defense's expansive training area on Salisbury Plain and is set up to simulate what British forces refer to as Fighting In Built Up Areas, or FIBUA. In the United States, this is more commonly known as Military Operations in Urban Terrain, or MOUT. The British Army first began the Streetfighter project in December 2018

"One of the primary goals of Streetfighter is to identify capability gaps between ourselves and potential enemies and then to recommend technical solutions for those areas of possible tactic overmatch," a member of the Royal Tank Regiment, identified only as Captain Quant, said in an official video presentation regarding the trials, seen below. "These are in areas like lethality, survivability, [and] situational awareness."

The Streetfighter II tank, which carries a blocky brown-white-bluish gray camouflage scheme reminiscent of the ones that British Army armored vehicles stationed in Berlin wore toward the end of the Cold War, builds on the original prototype that the British Army created for the program when it began just over a year ago. The most significant addition is the inclusion of the IronVision system, which Israeli defense contractor Elbit first unveiled in 2018. The company says that it has been working with the British Army to integrate IronVision on the Streetfighter II vehicle since January 2019, according to Jane's 360.

IronVision consists of an array of electro-optical and infrared cameras positioned around the hull of an armored vehicle, which then feed into a specialized helmet-mounted display. The system then "stitches' those feeds together, giving the individual wearing the helmet the ability to "see" right through the hull of the tank in any direction, day or night. This is similar in many respects to the AN/AAQ-37 Distributed Aperture System (DAS) on the F-35 Joint Strike Fighter.

The added situational awareness that this offers to the crew, while also allowing them to remain protected inside the tank with all of the hatches "buttoned up," is valuable, in general, but especially in urban environments. Dense, built-up areas, where conflicts are increasingly likely to occur, offer ample positions for hostile forces to hide, make quick attacks on the blind spots of passing vehicles, even those with dismounted infantry supporting them, and then rapidly retreat behind cover.

Optics associated with a tank's main gun or less comprehensive add-on sensor systems can only look in so many directions at once, and often with a very narrow field of view. Crew standing in open hatches or other personnel riding on the vehicle can help scan for threats, but they are also exposed to threats, including snipers. The original Streetfighter concept did have a mast-mounted 360-degree camera on the turret, but this still offered fixed fields of view and did not allow an operator the same kind of normal, natural freedom to simply "look" around that IronVision provides. The improved version of the concept tank does still feature a camera system slung on the barrel that offers an additional means of peering around corners, something the Danish military reportedly first employed operationally in Afghanistan on their German-made Leopard 2 tanks, as noted in the video below.

The original Streetfighter vehicle also had an external tablet-style system mounted externally at the rear that infantry working with the tank could use to look through its sensors to get a better sense of the battlefield themselves, but it's not clear if this system can pipe in the feeds from IronVision. Another member of the Royal Tank Regiment, identified simply as Corporal Towers, did highlight the improved ability, in general, for troops to communicate with those inside the tank and see what they see in the official video. Streetfighter II reportedly has a further updated communications suite, which likely includes data-sharing capabilities, as well.

The original Streetfighter tank already demonstrated manned-unmanned teaming with a small unmanned ground vehicle, which offers another option for scouting ahead and investigating potential ambush sites or other hazards. This could even help investigate the interiors of buildings ahead of commanders sending in dismounted troops.

The other major addition to the Streetfighter II configuration is a mock-up of a launcher for Brimstone anti-tank missiles on top of the turret. When the British Army put the tank on static display, it places one inert missile in the launcher, which looks to able to potentially accommodate at least two of these weapons. A product of the European missile consortium MBDA, Brimstone is a multi-mode weapon with both millimeter-wave radar and laser guidance systems, allowing it to engage threats at extended ranges day or night and in poor weather or on battlefields full of smoke, dust, and other obscurants.

Brimstone is already in service with the Royal Air Force and will be part of the Armament options for the British Army's forthcoming AH-64E Apache attack helicopters. MBDA is increasingly promoting the weapon, which is increasingly in worldwide popularity, in general, as an option for surface-launched applications, including on ground vehicles and boats. The missile's ability to get to a general target area using inertial navigation and then autonomously spot and engage targets would give Streetfighter II a way to engage threats that the tank's crew might not be able to attack with its 120mm main gun or .50 caliber and 7.62mm machine guns. It also simply offers the tank a standoff attack option.

Curiously absent in the Streetfighter additions for the Challenger 2 is any type of active protection system, which are becoming increasingly prevalent around the world. These systems, which come in various forms, are generally capable of defeating incoming infantry anti-tank rockets and guided missiles. These weapons have become an increasing feature in many recent conflicts with non-state actors, as well as nation-state militaries, who are increasingly armed with advanced types.

A hard-kill or soft-kill active protection system, or a combination of both, would seem to be an obvious choice to add to the Streetfighter II tank. Hard kill types use sensors tied to some form of an explosive array, projectile launcher, or maybe even eventually a directed energy weapon, such as a laser, to detect and physically knock down incoming rockets or missiles. Soft-kill systems use electronic warfare jammers or directed energy weapons to confuse, disable, or even damage guidance systems or other critical components to neutralize the threat.

It also lacks remotely-operated weapon stations for machine guns or other weapons on top of the turret, another feature that is increasingly common on armored vehicles worldwide. These systems offer vehicle crews additional means to actually engage any threats they detect while remaining buttoned-up.

It's possible that weight may be a factor. The latest models of the Challenger 2 are already nearly 83 tons when fitted with applique armor kits meant to improve their overall survivability. Streetfighter II notably lacks this add-on protection, but does feature a bulldozer blade for clearing obstacles, which troops also used as an improvised mobile stretcher to evacuate wounded personnel in the recent trials at Copehill Down.

The Challenger 2's weight has already been an important factor with regards to the development of the upgrades to be included in the Challenger 2 Life Extension Program, or CLEP, which is intended to help keep the tanks in service through at least 2035, It has also impacted their general mobility. In 2016, the British Army separately hired BAE Systems in the United Kingdom and Krauss Maffei Wegmann in Germany to jointly work on a developing a new armored bridge layer that could support the weight of the latest up-armored variants.

"I do hope this concept becomes reality," the Royal Tank Regiment's Corporal Towers said. "It makes our life on the ground a lot easier."

Streetfighter II is certainly an interesting concept and urban areas are only set to become a more common battlefield for any modern military. It will be interesting to see how it evolves and what additional features, such as active protection systems, might get added as time goes on and the British Army gets closer to potentially fielding operational examples of these modified tanks.