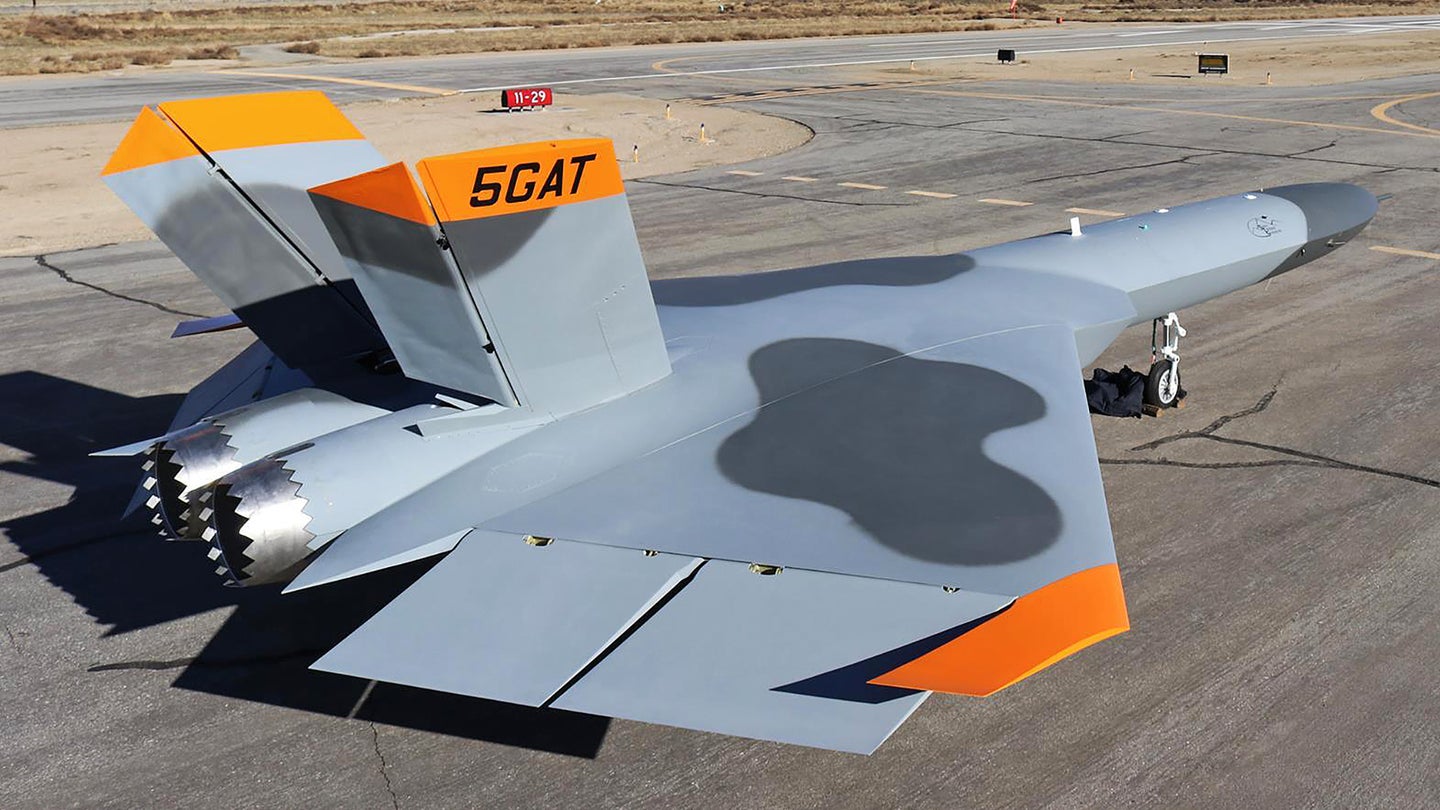 A small California-based aviation firm has announced that it recently completed engine and flight control testing on the ground on a stealthy unmanned aircraft known as the Fifth Generation Aerial Target, or 5GAT. The firm says that this design, which it originally developed as a stealth aerial target, could also serve in the "loyal wingman" role with manned combat jets and perform other operational missions.

Aviation Week was first to report that Sierra Technical Services had completed its first prototype 5GAT and had finished the various testing on Jan. 13, 2020. FlightGlobal

"We ran both engines all the way to [military] power at the same time," Roger Hayes, Sierra Technical Service's President told FlightGlobal. “We tested out our flight controls – elevons and rudders – and everything worked well."

Sierra Technical Services has not yet provided the exact physical specifications for the 5GAT, but has said in the past that it is dimensionally similar to a T-38 Talon jet trainer. A PowerPoint presentation from 2012 says the drone is only about 20 pounds heavier than the empty weight of a T-38, as well.

The 5GAT is also powered by a pair of General Electric J85 engines that actually came straight from a T-38, too. Additional components came from F-5 and F/A-18 jets, according to AviationWeek, which has helped keep costs low. Sierra Technical Services has not given a hard figure, but says that unit price for the drones will be under $10 million.

Still, despite this use of parts from other aircraft, the 5GAT's overall planform is considerably different from any of those designs, especially its rear-positioned diamond-shaped wings and intakes, which loosely resemble those of the F-22 Raptor. Pictures from the company website indicate that the drone uses honeycomb composite structures in its construction, as well as snaking intakes that hide the fan faces of the J85 engines, both features common to modern stealthy aircraft.

Sierra Technical Services also has not provided many specifics about the drone's performance, including its top speed. The company says that the two J85s allow it to fly at high-subsonic speeds and could potentially enable it to break the sound barrier.

"It would probably go supersonic without much trouble, but none of the structure was analyzed or designed for supersonic [flight], nor were the inlet lips." Hayes, the firm's President, explained to FlightGlobal. For comparison, the T-38 is capable of flying at up to Mach 1.3 for short periods.

Hayes also said that the 5GAT was capable of performing maneuvers up to 7.5 g and -2 g, but only for short periods. "It cannot sustain plus 7.5 g or negative 2 g. The aircraft will bleed off energy very quickly due to limitation of the thrust from these engines," he said. "We can make 7.5 g turns, but not sustain them for very long – that is basically a typical operational scenario."

All of these features and capabilities are in service of the mission that 5GAT was originally intended for, which is acting as a surrogate for new and emerging stealth fighters and other advanced combat jets, and even drones, that U.S. military fighter pilots are increasingly likely to encounter in any future large scale conflict. The drone itself has been in development since at least 2006, when the U.S. Air Force first funded a design study for a low-cost, stealthy target drone to better reflect advanced opposing aircraft. An interesting team, which included former employees of Lockheed Martin's Skunk Works advanced design bureau and students from the Air Force Academy, crafted the original conceptual design.

The Pentagon's Office of the Director of Operational Test and Evaluation, or DOT&E, subsequently took charge of the program. In March 2017, in cooperation with the U.S. Army Corps of Engineers (USACE), it finally awarded Sierra Technical Services a contract to build an actual prototype. Almost exactly two years later, DOT&E and USACE exercised an option in that contract and agreed to buy a second 5GAT prototype.

Now, Sierra Technical Services says it is also hoping to expand its plans for 5GAT to using the drone as a low-cost loyal wingman, which would work in groups with manned aircraft, and potentially in other optional roles, such as intelligence, surveillance, and reconnaissance. 5GAT does not have space for an internal weapons bay in its present configuration, but it can carry stores on pylons under the wings, though doing so would impact its stealthy signature. The ability to carry internal electronic warfare and expendable countermeasure payloads, as well as other electronic systems, does appear to be part of the design. Concept art from the firm's website, seen at the top of this story, shows one of the unmanned aircraft firing decoy flares to defeat an AIM-9X Sidewinder missile that an F-35 Joint Strike Fighter, seen in the background, had fired.

"We can carry all kinds of electronics, artificial intelligence gear, [intelligence, surveillance, and reconnaissance] equipment,” Hayes said in his interview with FlightGlobal. The mention of "artificial intelligence gear" is particularly notable given the Air Force's plans to develop an AI-driven flight control system, called Skyborg, that could be used on various unmanned aircraft, as well as potentially turn manned designs into pilot-optional ones. The service has said that it plans to test Skyborg first on Kratos' XQ-58A Valkyrie drone, but Sierra Technical Services could offer 5GAT as another option for that testing program.

Having a stealthy, more maneuverable loyal wingman option would be somewhat logical for certain applications. Even as an unarmed node that can be more readily risked emitting RF energy from radar and electronic warfare systems in a high-end contested battlespace, a drone that can push forward ahead of stealthy and non-stealthy fighters for short periods of time, could be beneficial. Still, overall, 5GAT seems like a less refined design in terms of a possible attritable unmanned combat air vehicle (UCAV) capability compared to the XQ-58 and one that is a bit more niche in nature, at least in the potential combat operations sense.

In addition, this aircraft appears to use a conventional launch and recovery method – basically taking off and landing on a runway – while the Valkyrie is runway independent, launching via a rocket-assisted method and landing via parachute and cushioning system. This takes away some of the potentially game-changing flexibility that the XQ-58 offers. As such, where the 5GAT seems most beneficial, at least in its present form, is for presenting a stealthy and relatively fast and maneuverable target for training and development applications. And this was its primary mission from the start.

Just emulating a 5th generation enemy target alone would be a huge help as the need for stealthy adversary assets is growing fast. While F-35s, and even F-117s, at least to some degree, can stand in for this role, they will always be limited when it comes to volume. Stealthy cruise missiles are a major threat, as well, not just fighters and attack aircraft. 5GAT should be well suited for representing that threat in an economical and reusable fashion.

With this in mind, being able to mix in swarms of 5GATs with manned adversaries would be extremely beneficial and more cost-effective than the all-manned alternative. In other words, such a capability would allow for the presentation of highly complex and challenging threat scenarios for 5th generation fighter pilots and ground and sea-based air defenses without the huge cost of actually putting large numbers of 5th generation adversaries in the air.

Maybe even more important is that 5GAT could also stand in as a standalone enemy unmanned combat air vehicle (UCAV) swarm that is networked together to achieve its maximum potential – a reality that our forces will be facing in the not so distant future. Its use for more traditional weapons development testing is clear, as well.

All told, 5GAT represents a critical capability that the Pentagon really does need. It can grow in many directions within its intended target role, but it could also evolve outside of it in the future. New variants could bring weapons capability and even higher performance down the line, as well. So, it really is best to see the 5GAT effort as somewhat related to the Valkyrie, but more complementary than competitive to it. Just doing what it was originally designed to would be a huge help as it is.

What we still don't know is the range, control interface capabilities, and just how stealthy 5GAT actually is. We also don't know just how cheaply 5GAT could be purchased in larger numbers. By better knowing 5GAT's limitations, we will get a clearer understanding of its real potential.