With a resume that reads like fiction, it’s pretty clear that this dude belongs in space. 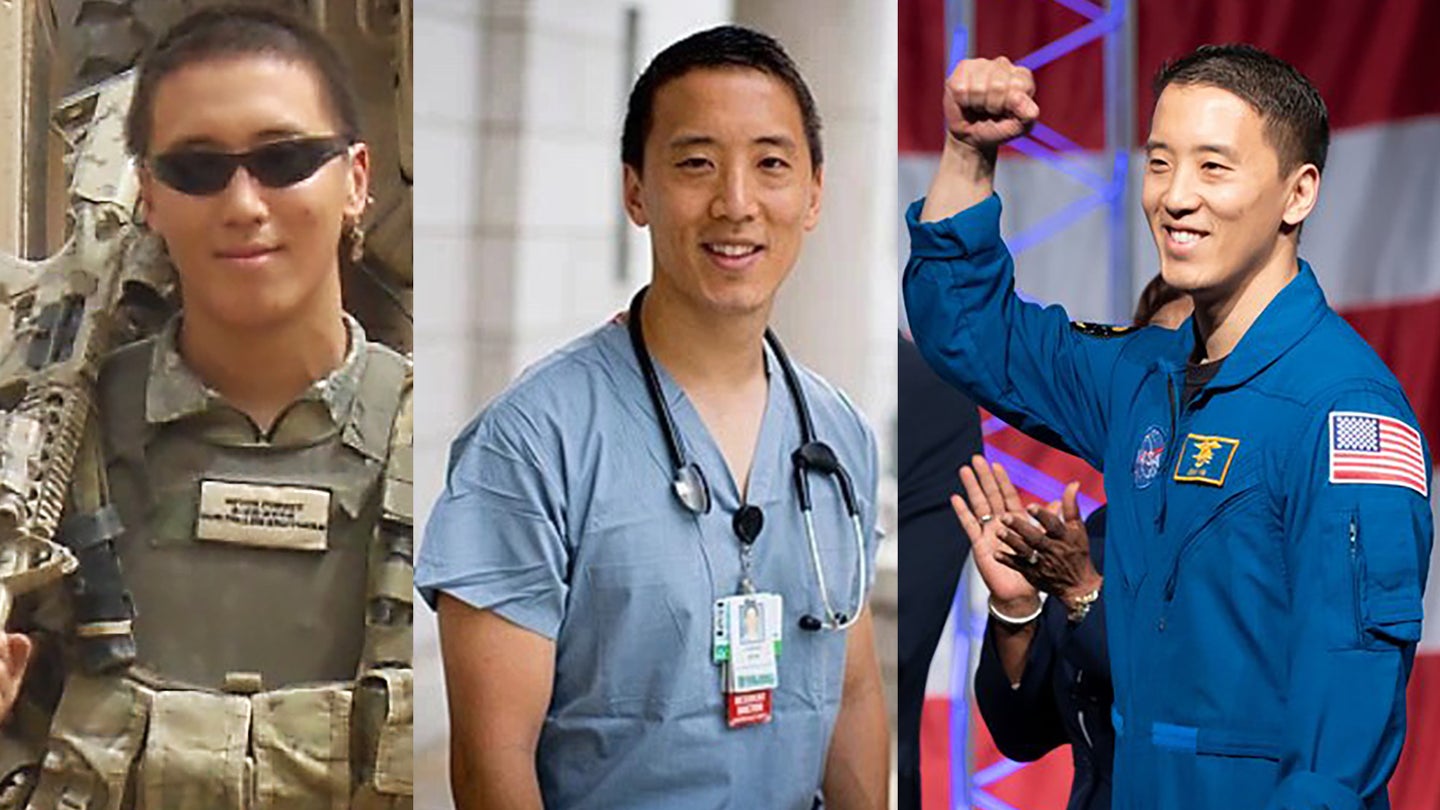 The American Special Operations Forces (SOF) community is full of overachieving type A personalities equipped with insanely advanced technology, such as underwater jet boots and stealthy helicopters. In a development that is sure to add to the already considerable reputation of this elite cadre of American warfighters, former Navy SEAL Jonathan "Jonny" Kim recently completed NASA training, has been formally designated as an astronaut, and is now awaiting his first assignment to fly into space.

Going from SEAL to astronaut is one heckuva transition, but it's what Jonny did between leaving active duty and signing on with NASA that is so unique and impressive. No, he didn't become an author! These days, it seems like every other Navy SEAL who leaves active duty writes a book about the experience. Amazon currently has 438 SEAL biographies listed. Not that they aren't all entertaining, informative, and inspiring, but at a certain point, the market is saturated and the situation is destined for parody.

To be clear, Jonny Kim, who was born and raised in Los Angeles to Korean-American immigrants, had a very successful career in the SEAL teams that could easily have been turned into a book. Like all SEALS, Jonny attended Basic Underwater Demolition School (BUDS) in Coronado, California. While there, he went through the same training as all SEALS do, including open ocean swimming and diving, hand to hand combat, land navigation, marksmanship, and all the other skill sets today's SOF warriors require to operate on the modern battlefield. While each SEAL has the basic ability to do all of the functions required of SEALS, after completing BUDS and being assigned to a SEAL team, each individual SEAL is specially trained in a specific task, such as sniper, heavy weapons operator, interrogator, etc.

In Jonny's case, after he was assigned to SEAL Team 3, stationed in Coronado California, he received extra training as a medic and as a sniper. During multiple deployments to the Middle East, including over 100 combat missions for which he was awarded the Silver Star and Bronze Star with Combat “V," his primary responsibility was to be the first line of medical response should any of his teammates require assistance. Not surprisingly, this experience led directly to his decision to pursue medical school.

While deployed to Ramadi, Iraq, in 2006, one of Jonny's close friends was shot in the face. Jonny did everything he could to keep his friend alive, administering first aid with the limited equipment and drugs he had on him. Jonny knew his friend needed immediate intensive medical care. While Jonny was able to get his friend to a physician, it was not soon enough, and his friend died. That feeling of helplessness, seeing his friend suffer and not being able to save him, stayed with Jonny, and he eventually decided to apply to medical school as a result.

Since Jonny did not have an undergraduate degree, medical school was not yet an option. He applied for and was accepted to the Seaman to Admiral program, a Navy program that provides enlisted Sailors who have demonstrated exceptional performance and leadership potential a fully funded undergraduate college degree. For Jonny, that meant leaving the SEAL teams and reporting to the classrooms at the University of San Diego (USD). There, he earned a bachelor's degree in mathematics in just three years. Following graduation, he was commissioned in the Navy's Medical Corps. Next stop? Harvard Medical School.

That's right. Just three years after tearing around the Middle East, Jonny was enrolled in what is universally acknowledged as the most prestigious medical school in the world. While enrolled at Harvard Medical School, Jonny decided to apply to the NASA astronaut program. Even with his stellar record, being accepted was no sure thing; his selection class of 12 astronaut candidates was screened from over 18,000 applicants. Accordingly, while waiting to hear back from NASA, Jonny continued with his medical career.

Having seen first hand during his combat deployments how medical professionals can save lives in extreme circumstances, once he finished medical school and was certified as a Doctor of Medicine (M.D.), Jonny chose to pursue advanced training in emergency medicine. He started a four-year course of training as a resident physician in emergency medicine at Massachusetts General Hospital in Boston. After completing his first year in the emergency medicine program, he was notified of his acceptance to the astronaut program. Naturally, he decided to put his medical training on hold and accepted the invitation from NASA.

Being selected as an astronaut candidate is an amazing accomplishment in and of itself, but that's just the beginning of a lengthy and challenging process. After accession into the program, candidates are evaluated at the Johnson Space Center in Houston, Texas, for about two years. During that time, they complete International Space Station systems training, extravehicular activity skills training, robotics skills training, Russian language training, and aircraft flight readiness training. If successful, they are then officially designated as astronauts and are eligible to be selected for a specific space mission. Once assigned to a specific mission, astronauts complete advanced training unique to that mission.

This process of baseline training followed by advanced training is not unlike his first career as a SEAL, or even his second career as an M.D. Every SEAL completes Basic Underwater Demolition School (BUDS) in Coronado, California. This provides a baseline of common skills, techniques, and terminology. From there, however, SEALS are assigned to specific SEAL teams that may have different specialties, and each SEAL team tailors its training to its upcoming deployments. In a similar manner, every M.D. completes essentially the same curriculum in medical school, then goes on to advanced training, depending on what the assigned specialty is. It works roughly the same way with astronauts. Once they complete the baseline training as astronauts, they proceed to advanced training unique to their specialty or mission.

So what's next for Jonny? At this point, he's certainly interested in the progress of NASA's plan to restore a domestic manned spaceflight capability. With the retirement of the Space Shuttle in 2011, NASA lost its "in house" capability to send U.S. astronauts into space on its own equipment. As a temporary solution that is now nearing a decade in use, NASA contracted with the Russian space agency Roscosmos to provide launch services for U.S. astronauts to get to the International Space Station (ISS). A recent spate of failures on the Russian Soyuz family of rockets have put the ISS at risk of having to operate in unmanned mode with no astronauts on board.

Needless to say, NASA is very interested in avoiding that unpleasant scenario and is actively working on the Commercial Crew Development Program to restore America's ability to launch astronauts into outer space onboard domestically manufactured space vehicles. The two competing models in the NASA program are the SpaceX Crew Dragon space capsule, and the Boeing CST-100 Starliner crew capsule. Both of these space vehicles have gone through extensive research, development, and testing, and are nearing certification to carry humans. The initial focus of this program is to get U.S. astronauts to the ISS. If both space vehicles prove capable, the mission sets will probably expand beyond the ISS to other manned space flight missions.

As far as Jonny's initial service assignment as an astronaut, like all members of his astronaut class, he entered training as part of the Artemis program, through which NASA is actively pursuing a return to the Moon. Manned missions in the Artemis program will use the Orion space capsule. In contrast to the Crew Dragon and CST-100 Starliner craft, which are strictly transfer vehicles intended to get astronauts from earth to the ISS, Orion is optimized to support astronauts for long-duration missions that go beyond low earth orbit. As of now, Orion can support missions of up to 21 days duration, more than enough to get from Earth to the Moon and back. Eventually, NASA hopes to build on the success of a return to the Moon with a mission to Mars.

While his life so far has been nothing short of amazing, what many people notice about Jonny Kim is that he is an extremely humble man who describes himself as a servant of a greater cause, who never forgets where he came from. Of his decision to join the Navy and become a SEAL, in an interview with the Annals of Emergency Medicine, he said "Going into the Navy was the best decision I ever made in my life because it completely transformed that scared boy who didn't have any dreams to someone who started to believe in himself." Even though he is now in what is widely considered the most elite group of people on the planet, astronauts, he still maintains an air of humility and a focus on service.

We'll be sure to follow his progress and give you an update when he gets assigned to his first mission. But above all else, this guy's insane resume and accomplishments at such a young age really highlight what is possible if you give it your all, regardless of your ethnicity or background. And he hasn't even flown into space yet!

We need real role models and heroes these days, not just movie stars or pro athletes. By all accounts, Jonny Kim fits the bill.