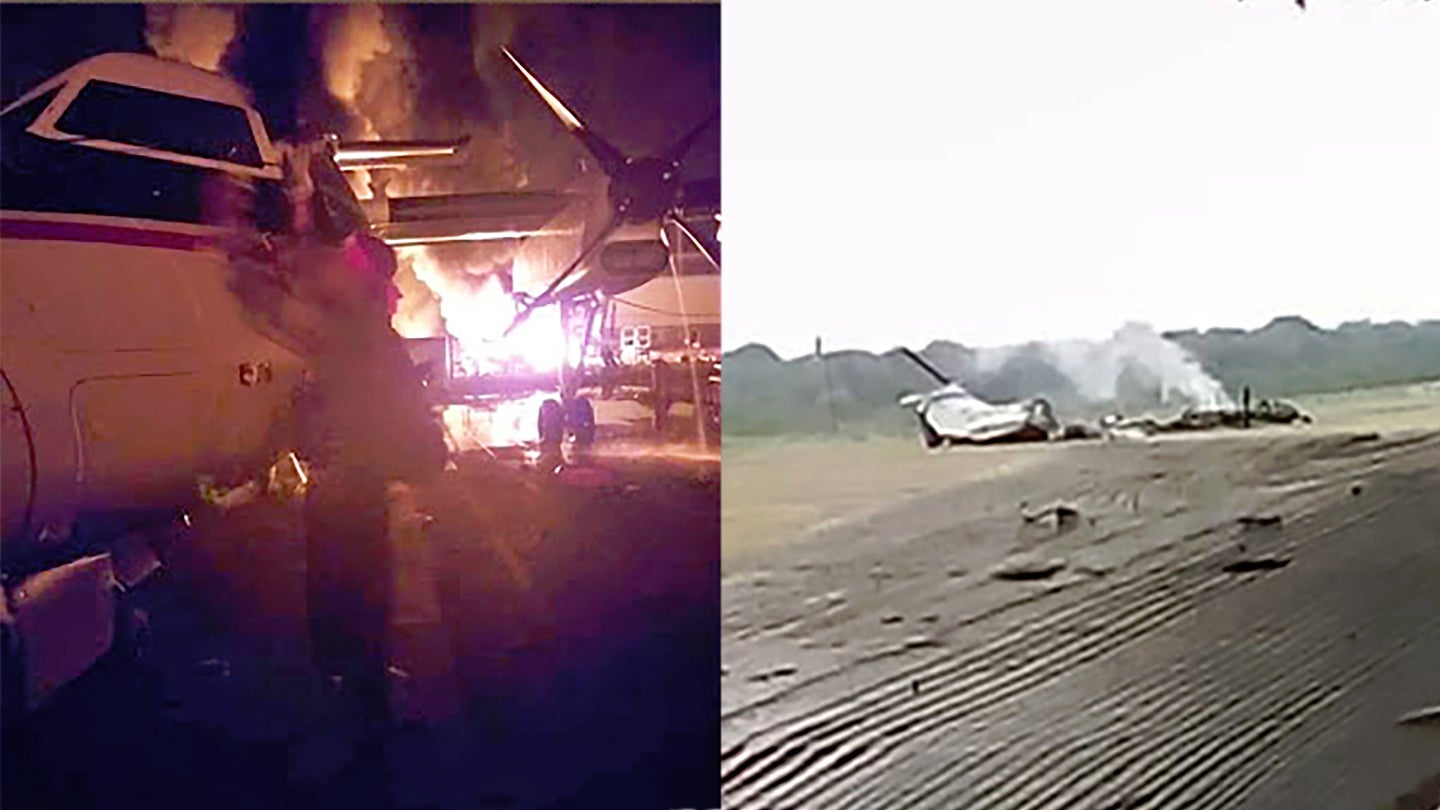 An attack on a military outpost in Kenya where U.S. troops are stationed, as well as its associated airfield, has left a U.S. servicemember and two contractors dead and six aircraft and helicopters damaged or destroyed. This includes a secretive U.S. military de Havilland Dash-8 twin-engine turboprop configured for intelligence, surveillance, and reconnaissance missions. The terrorists who carried out the raid also damaged or destroyed vehicles and fuel tanks.

Al Shabaab, Al Qaeda's franchise in Somalia, carried out the attack on the base, known as Camp Simba, and the nearby airfield, typically referred to simply as Manda Bay after the nearby body of water of the same name, occurred in the early hours local time on Jan. 5, 2020. The terrorists reportedly used a suicide car bomb to breach the main facility and also stormed the airstrip, both of which are situated roughly 60 miles southwest of the Somali border. One U.S. service member and two Department of Defense contractors died in the attack, according to U.S. Africa Command, while another two U.S. military members were injured and are, at the time of writing, in stable condition and being evacuated.

There is no word yet on any Kenyan casualties, but the country's authorities have said that at least eight Al Shabaab terrorists died in the ensuing skirmish. U.S. and Kenyan authorities had earlier since issued statements that forces from both countries had successfully repelled the attackers.

"The attack on the compound today involved indirect and small arms fire. After an initial penetration of the perimeter, Kenya Defense Forces and U.S. Africa Command repelled the al-Shabaab attack," AFRICOM's statement read. "Reports indicate that six contractor-operated civilian aircraft were damaged to some degree."

The full extent of the damage remains unclear. The Associated Press, citing an initial Kenyan police report the outlet had seen, had reported that an unspecified U.S. "Cessna," as well as a Kenyan Cessna Grand Caravan, and two unknown U.S. helicopters, along with various American vehicles had been destroyed.

Pictures that have emerged that show what appears to be the remains of a Beechcraft King Air that was destroyed and burned out during the attack, as well as a pair of M-ATV mine-resistant vehicles that very likely belong to U.S. forces. This could be the aircraft that the Kenyan police report described as a U.S. "Cessna."

Some reports have suggested that this could be a U.S. Air Force C-146A Wolfhound special operations transport, but the tail section seen in the image notably lacks the "stinger" style tail seen on that aircraft, along with other differences. In addition, AFRICOM has only said so far that the destroyed and damaged aircraft were contractor-operated, which the Wolfhounds are not.

Contractors do fly a mix of fixed-wing aircraft and helicopters from the Manda Bay to provide transport, casualty evacuation, and personnel recovery support to American forces and their local partners in Kenya and neighboring Somalia, where U.S. special operations forces and other troops are fighting Al Shabaab and training Somali personnel to do the same. At least one contractor-operated Bell 412 helicopter is based there, which could be among the U.S. helicopters that reportedly got destroyed in the raid.

Al Shabaab has also released its own pictures from the attack, clearly showing a specially configured de Havilland Dash-8 in front of what appears to be the burning fuel tanks. We don't know how severe the damage to this plane is, but one picture does show smoke coming out of the cockpit and an Al Shabaab terrorist appearing to be putting or trying to put something inside.

This U.S.-government owned, but contractor-operated Dash-8, a DHC-8-202 model, belongs to a secretive fleet of U.S. Special Operations Command (SOCOM) intelligence, surveillance and reconnaissance (ISR) aircraft known as SOCOM Tactical Airborne Multi-Sensor Platforms, or STAMP, which The War Zone was first to report on. These aircraft are known to support shadowy Joint Special Operations Command.

At present, the STAMP fleet includes two DHC-8-202s, as well as three Beechcraft King Airs. The paint scheme on the aircraft in the images Al Shabaab posted online, white with a large blue cheatline with a smaller red one underneath, matches the Dash-8 that presently carries the U.S. civil registration code N8200L. You can read more about this particular plane in this past War Zone piece. The other STAMP Dash-8, N8200R, has a similar paint job, but with the colors of the cheatlines reversed.

Whatever the final damage assessment is and how many aircraft and other assets Al Shabaab succeeded in destroying or damaging, the attack is a particularly brazen statement of the group's very real ability to strike outside of Somalia. Kenya, which is a significant member of the African Union-led operations targeting Al Shabaab in Somalia, has suffered a number of attacks on both military and civilian targets on its own soil from the group in recent years.

Just last year, the terrorist organization launched a major attack on an upscale Dusit D2 Hotel and associated business complex in the Kenyan capital Nairobi, killing 21 people and wounding another 28. After that operation, Al Shabaab announced the beginning of a campaign it dubbed "Al-Quds (Jerusalem) will never be Judaized," a reference to a pledge to ultimately eject Israel from the city of Jerusalem, a common refrain among Islamic extremist groups. The Somalia terrorists said that the raid on Camp Simba and Manda Bay was part of this same campaign. There is no indication that this is tied to the ongoing crisis between the United States and Iran.

This also comes as the U.S. military has significantly expanded both facilities in recent years, which coincided with U.S. President Donald Trump's decision to designate a swath of southern Somalia as an "area of active hostilities" in 2017. This enabled the U.S. military to dramatically increase its operations there and has led to a spike in airstrikes, including using drones, on Al Shabaab targets since then. Aircraft flying from Manda Bay have been providing important persistent surveillance capabilities over southern Somalia in support of those operations.

U.S. forces first began operating from Camp Simba and Manda Bay more than 10 years ago, with the U.S. Navy initially being responsible for overseeing operations at these facilities. In addition to using the airstrip as a launch point for aerial reconnaissance over neighboring Somalia, American forces have used the main base as a training base for both Kenyan and Somali forces.

In 2017, overall responsibility for both sites passed to the U.S. Air Force, which established the 475th Expeditionary Air Base Squadron to oversee day-to-day activities at Manda Bay. In August 2019, this unit raised the American flag over the airfield, in a ceremony that marked its transition to an "enduring" base, meaning the U.S. military now treats it as a semi-permanent operating location.

Despite this existing plan to continue operations at this site for the foreseeable future, Al Shabaab's attack has demonstrated a clear need for U.S. and Kenyan forces to reassess their defensive posture going forward.

Author's note: The original version of this story said that three Americans had died. U.S. Africa Command has not yet specified the nationalities of the two Department of Defense contractors. The story has been amended to reflect this.

U.S. Army General Stephen Townsend, commander of U.S. Africa Command, has categorically denied claims on Social Media that Al Shabaab killed him during the attack on Camp Simba and the Manda Bay airstrip.

The U.S. military has not yet formally released the identities of the U.S. serviceperson and two Department of Defense contractors who died in the attack. However, the family of U.S. Army Specialist Henry Mayfield, Jr., has told various media outlets that he was the serviceperson who was killed. It's is not known yet what unit Mayfield was assigned to at the time.

Authorities in Kenya have insisted that no Kenyans died in the attack.

There are also now reports that three suspected Al Shabaab terrorists attempted to breach a British military-operated training camp in Kenya, as well, but were detained without incident. The British Army maintains a standing training element in Kenya, known as the British Army Training Unit Kenya (BATUK), at a site north of the capital Nairobi.

U.S. Africa Command has released a new statement stating that elements of the East Africa Response Force (EARF) have deployed to Camp Simba and Manda to provide additional security in the aftermath of the attack. The EARF is a contingency force based at Camp Lemonnier in Djibouti that is drawn from rotating units and, despite its name, provides a dedicated rapid reaction capability to support U.S. operations across Africa, as necessary.

"Contrary to various open source reports, U.S. Africa Command does not assess yesterday’s attack by al-Shabaab is linked to Iran," the press release added. "While Iranian involvement is not suspected in the attack, U.S. Africa Command has observed other nations, including Iran, seek increased influence in the Horn of Africa."

The U.S. military has now officially announced that U.S. Army Specialist Henry Mayfield, Jr., assigned to the 1st Battalion, 58th Aviation Regiment, part of the 164th Theater Airfield Operations Group based Fort Rucker, Alabama, died in the attack. The Pentagon has still not released information about the two Department of Defense contractors who were killed.