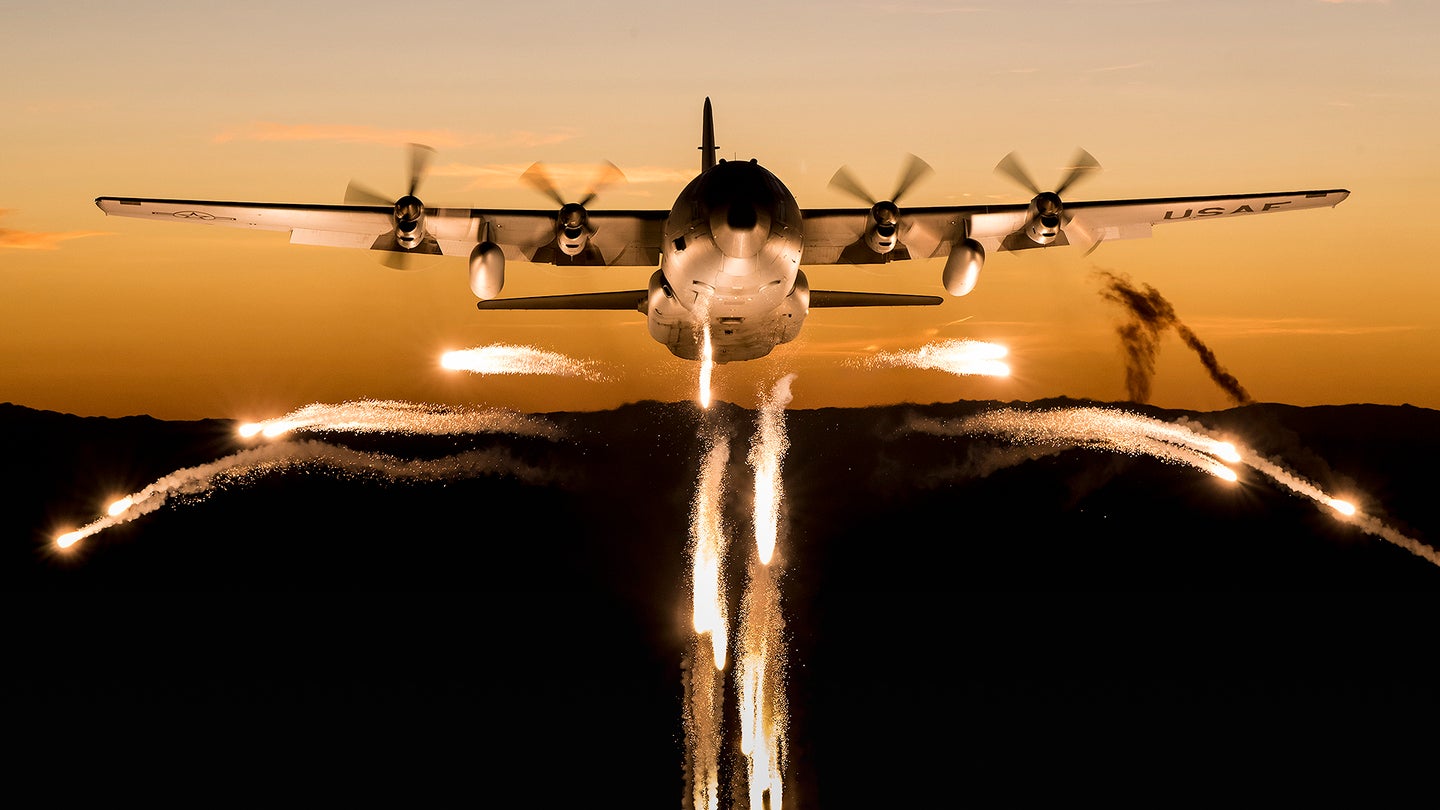 Flares can make any aircraft, no matter how big and lumbering, look dynamic and even beautiful. In reality, they are an essential countermeasure used to confuse enemy heat-seeking missiles. So, how much do these fiery things being pumped out the back of military aircraft actually cost?

Countermeasure flares burn at thousands of degrees and there is a wide variety of types, the vast majority of which ignite when their volatile compound mix is exposed to the air itself. These are can be referred to as pyrophoric flares. Beyond their use in actual combat, even in training, helicopters and ground attack aircraft will practice firing flares off when entering into high-risk areas of their flight envelope and mission where shoulder-fired surface-to-air missiles could be present. Fighters will also pop flares during training dogfights when the adversary is within the firing envelope of their short-range missiles. Sometimes fighters will even thank a tanker boom operator by popping flares. These pyrotechnics also often evoke oohs and ahhs from air show crowds as they ripple off military aircraft performing flying displays.

With all this in mind, how much is being spent each time a flare pops off? Here are the numbers:

In other words, if an aircraft releases a 'bucket' full of 30 flares, the cost of doing so is $1,050. But this is among the most basic of expendable infrared countermeasures. The cost climbs for more advanced types and those that are used on fewer types of aircraft or for specific tactical scenarios.

For instance, the F-35's MJU-68/B that is used to decoy advanced infrared threats costs a whopping $3,000 per unit, according to Pentagon budget documents. Another flare the F-35 is capable of dispensing, the less capable MJU-61/B, cost $75 apiece. This same flare could replace the venerable M206 in the future.

The most recent budget puts the cost of the MJU-66/B flare at the price of $135 each and describes this expendable as such:

MJU-66 decoy Countermeasure Flare is an improved version of the MJU-64 providing increased decoy effectiveness and protection for the A-10, C-130 and F-35 aircraft and HH-53 and HH-60 helicopters and is being evaluated for other aircraft. It is a one-piece aluminum case containing a payload of advanced special material elements, loaded into a multiple jettison unit magazine installed on a countermeasure dispenser. When deployed into the air stream, the special material reacts to emit an infrared signal to decoy infrared seeking missiles.

Often times a cocktail of different flare types are used together to cover a broader number of threats across the infrared spectrum and to achieve a better overall countermeasure effect. For instance, the C-5 and C-17 also use the MJU-53/B, which those aircraft can release massive amounts of within a matter of seconds, but they will also fly with MJU-62/B spectral flares that aren't as visible to the naked eye mixed in. You can see this mix in action in spectacular fashion in the video below:

The DoD's budget documents describe the MJU-62/B as such:

MJU-62 Flare is a multi-spectral countermeasure designed to be used as part of a flare cocktail pattern to confuse advanced infrared threat missiles. Used primarily on the C-17 and C-5 aircraft which require a 1 inch by 2 inch by 8 inch flare size to accommodate desired cocktail flare mixes. MJU-62 is being evaluated for use on other types of aircraft such as F-16, A-10, and HH-60.

Beyond the F-35, other aircraft seem to have expensive proprietary flares, too. The B-52, for instance, uses an older design that has no commonality with the rest of the force. This flare, the ALA-17C, is being phased out as the B-52 gets upgraded with more modern and common ALE-47 countermeasure systems. In the meantime, each of these expendables has a $1,000 unit cost

The B-1B also has a unique flare for its upward-firing dispenser arrangement that exists due to its high-speed, low altitude flight profile. Designated the MJU-23/B, we couldn't find any budget data on this flare within the last couple of years, but in 2013 they cost $623.

It is possible that some of the unit costs listed, at least the very expensive ones, include all-up packages of multiple flares, but we could not confirm this. Regardless, this gives you a general idea of what these things cost. It's also worth mentioning that sometimes flares that are close to reaching their expiration date are fired off in training or otherwise, which is likely less expensive than disposing of them formally on the ground.

So, next time you see fighter, bomber, transport, or helicopter spewing flares you can count each one in terms of the dollars and cents literally being lit on fire. But hey, a little perspective here, everything costs huge amounts of money when it comes to aviation, and this is especially so for military aviation. Spewing hundreds of dollars in flares to say thanks for the gas may seem like a waste, but that same tactical fighter costs roughly no less than $20,000 per hour to operate and it goes up from there, way up. The F-22 is basically three times that cost per hour, for instance.

When it comes to Pentagon expenditures, everything is relative.

Author's note: Updated piece to reflect that flares may be fired off that are close to exceeding their shelf life.