The frosted eyewear, which comes from the aerospace world, keeps a wearer from seeing anything aside from what is directly in front of and below them. 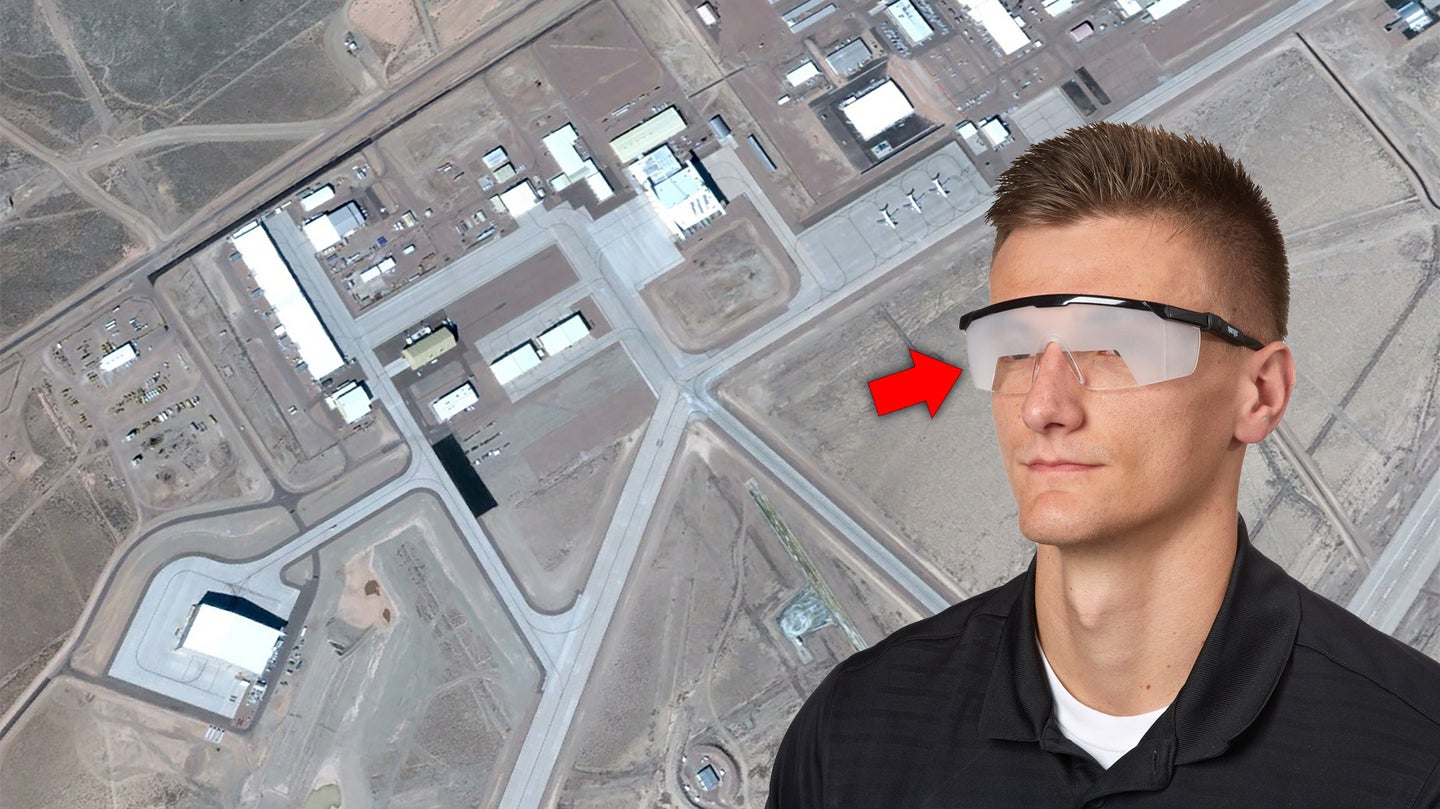 The incredibly tight security measures at work at the Air Force's clandestine flight test center most commonly referred to as Area 51, a place where the government goes to hide and is literally above the law, are legendary, both in lore and actuality. From its own army of private security contractor "camo dudes" to a pocket fleet of uniquely configured Black Hawk helicopters, maintaining the installation's perimeter integrity is a big undertaking, especially as the locale has grown in prominence within pop culture. But inside the fence, things aren't much more hospitable when it comes to accommodating visitors.

You have probably heard of the blue busses with blacked-out windows that move workers to and from the secretive facility or the requirement for passengers to leave their shades down when flying into and out of Groom Lake on one of the famous 'Janet' airliners that service it and other clandestine locales around America's southwest. Even sci-fi-like hand scanners were a staple at highly secure sites on the Nevada Test And Training Range, and certainly Area 51 too, back in the 1980s. But have you ever heard of "foggles?"

The term refers to goggle-like eyewear that have fogged-out wrap-around lenses and a notch or bifocal-like area at the bottom that allows a wearer to see what is immediately in front of and below them. With the vast majority of the goggle's viewing area frosted over, nothing can be made out at any meaningful distance. They also come in darkly tinted types and a few other formats, such as laboratory-style goggles that have similar modifications. They are basically blinders for humans, but ones that are far more restrictive than those that horses use.

Foggles do have a major aviation crossover, which probably explains their adaptation for security use. Their security role may very well have originated from a momentary burst of off-the-shelf genius by someone working on a clandestine aerospace program. Pilots wear similar if not identical devices for instrument training. Basically, it allows them to see just the instrument cluster so as to get accustomed to not relying on outside visual cues when flying the plane on instruments only. This also provides familiarity with the fact that their own instincts will try to trick them without those external visual cues being present. Other devices exist for this application, from 'hoods' to 'visors,' that do pretty much the same thing, but foggles are a bit less cumbersome than some of the other options that may be better suited to performing instrument upset attitude recovery drills and instrument approaches in the cockpit than walking across an unfamiliar aircraft parking ramp.

These devices are often used when infrequent visitors arrive at the installation. In some cases, foggles are put on while onboard the arriving aircraft or bus and are only taken off once inside a secure windowless building. Then, when moving to a destination on base directly related to the individual's visit, such as a particular hangar where a project is being housed, the foggles go back on. Even inside certain hangar areas, they may be worn to keep contractors visiting one program from seeing a competing one or other unknown proprietary technology nearby, if even just by chance. The same can be said for VIP type visitors that don't have the unique clearances required to work at the base.

It's not clear if more regular workers have to wear the glasses under certain circumstances, as well, but it is likely that certain procedures have come and gone depending on changing operational concerns throughout the base's long and bizarre history. The use of foggles may not even be native to just Area 51, either. Similar measures could be used at other highly sensitive sites under various circumstances, even if they are temporary in nature.

So, even if you do get the aerospace industry's equivalent of Willy Wonka's golden ticket and find yourself in a position to visit Area 51 for business, the chances that you will see anything but exactly what you are supposed to see are slim to none.

But maybe they will let you keep the commemorative foggles!

Airspace Closures For “Storm Area 51” Have Been Posted

The restrictions will keep news and tour helicopters, as well as drones, away from the Area 51 border and beyond.