The launch, which the Pentagon had previously said would come before the end of the year, could have major geopolitical ramifications. 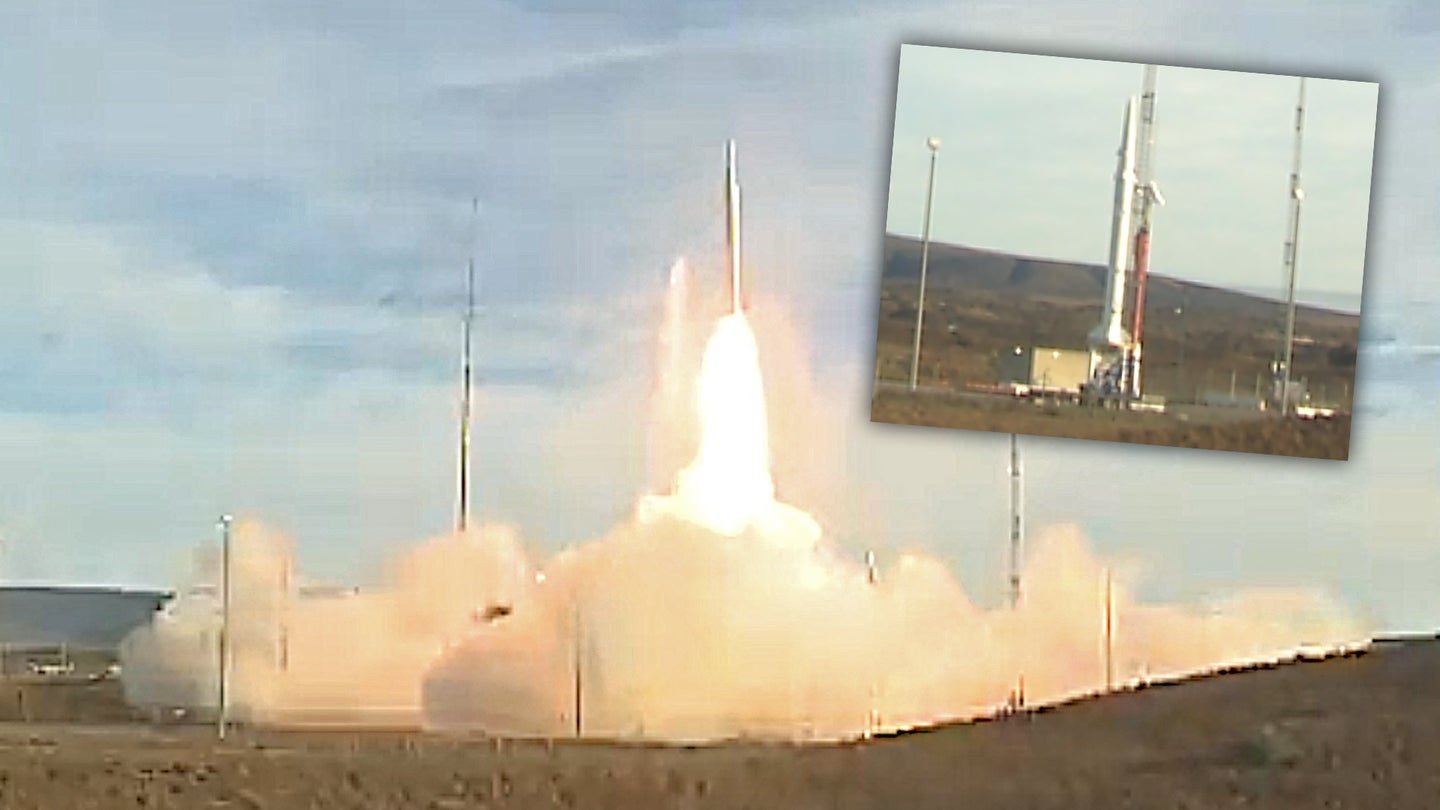 Details are still limited, but the U.S. military has confirmed that it launched a ground-launched ballistic missile, believed to be in the intermediate-range class, from Vandenberg Air Force Base in California this morning. This is the first U.S. test of this type of weapon since the collapse earlier this year of the Intermediate-Range Nuclear Forces Treaty, or INF, between the United States and Russia, which had prohibited both countries from developing and fielding missiles in this category.

CNN's Ryan Brown was among the first to get the official acknowledgment of the test. In March 2019, the Pentagon announced that it planned to conduct a test of an intermediate-range ballistic missile, or IRBM, defined as a ballistic missile with a maximum range of between 1,864 and 3,418 miles, in November. It's unclear why the test was delayed slightly. In August 2019, the U.S. military conducted a test of BGM-109 Tomahawk land-attack cruise missile from a trailer-mounted derivative of the Mk 41 Vertical Launch System, another system the INF had previously banned. Under the provisions of the INF, the U.S. Air Force and Army had respectively disposed of dedicated ground-launched BGM-109G Gryphon cruise missiles and Pershing II medium-range ballistic missiles in the late 1980s and early 1990s.

"The Department of Defense conducted a flight test of a conventionally-configured ground-launched ballistic missile at approximately 8:30am. Pacific Time, today, Dec. 12, 2019, from Vandenberg Air Force Base, CA," the Pentagon said in a statement, according to a Tweet from CNN's Brown. "We are currently evaluating the results of the test."

There were indications that the test was imminent already. On Dec. 11, 2019, Twitter user @AircraftSpots, a friend of The War Zone, had posted a Tweet about a Notice to Airmen (NOTAM) cordoning off an area off the coast of California near Vandenberg ahead of what appeared to be some kind of test. Vandenberg is also routinely used to conduct regular test launches of the U.S. Air Force's LGM-30G Minuteman III intercontinental ballistic missile (ICBM).

There are no details yet about the missile's actual design or capabilities. However, in 2017, the U.S. military reportedly began studying what it would take to develop weapons that the INF then prohibited. This was prompted by Russia's development and fielding of a treaty-breaking ground-launched cruise missile, something the Kremlin continues to deny it did, which ultimately led to the Cold War-era deal falling apart.

The U.S. military could have explored multiple tracks and put any number of them into action after the abandonment of the INF. Developing a missile using only one or two stages from the three-stage Minuteman III design is one option. The U.S. Army has already acquired similar designs in the past for use as surrogates for ballistic missiles during ballistic missile defense system tests. The Hera, for example, uses the second and third stages from older Minuteman II ICBMs.

Another possibility would have been a conventionally armed design based on the booster that the U.S. Army developed as part of its Advanced Hypersonic Weapon (AHW) program are options that the United States could have leveraged quickly to enable this test.

The Army has already been leveraging the work done under the AHW effort to support the development of a new ground-based hypersonic missile as part of a tri-service effort with the U.S. Air Force and Navy. There is also a possibility that this test was actually of a booster with a new hypersonic boost-glide vehicle on top, but the Army has said it doesn't expect to conduct the first test launch of its future ground-launched hypersonic weapon until 2022.

In 2018, the service had also revealed plans for a "Strategic Fires Missiles" with a then-INF-breaking range, which appeared to be a new ground-launched ballistic missile. This program may also have informed work on the new IRBM.

The test is almost certain to draw the ire of Russia, where President Vladimir Putin has already demanded a "symmetric response" to the August ground-launched Tomahawk test, as well as criticism from China. The U.S. government has said in the past it could use new post-INF missiles to challenge the Chinese geopolitically in the Pacific Region, especially in disputed areas, such as the South China Sea. It may also prompt responses from smaller potential opponents, such as North Korea, which has been threatening to a new "strategic" missile test before the end of the year and has decried international criticism, especially from the United States, of its own ballistic missile programs.

Breaking Defense is reporting that what the U.S. military is now calling a "prototype conventionally-configured ground-launched ballistic missile" flew more than 310 miles, beyond the limits the INF had previously imposed.

The U.S. Air Force has now released footage of the test.

A close-up view of the missile on the launch platform right before the test strongly suggests that the prototype has a Maneuverable Reentry Vehicle (MARV) warhead. This had also been a feature on the Pershing II.

Defense News has learned that the Air Force led the test in cooperation with the Pentagon's Strategic Capabilities Office (SCO). In addition, Northrop Grumman Innovation Systems, previously known as Orbit ATK, was the prime contractor.

Experts and observers had already noted the similarities between the missile that the U.S. military tested and previous designs based on the Castor 4 rocket booster, which is now presently a Northrop Grumman Innovation System product. Using Castor 4 would have also presented the United States with a relatively low-risk and fast track to developing a new IRBM.

Vandenberg Air Force base has now released a statement that says that work on the missile began in February 2019 after the U.S. government formally suspended its obligations under the INF, months before it officially withdrew from the treaty in October. The service said that it typically takes 24 months, not nine, to execute this kind of launch.

"The Western Range plays an integral role in testing new capabilities with our mission partners by providing the infrastructure, personnel and range assets needed to carry out efficient missile testing from conception to evaluation," Air Force Colonel Anthony Mastalir, commander of the 30th Space Wing at Vandenberg, said in a statement. "The National Defense Strategy provides very clear direction to restore our competitive edge in the reemergence of great power competition, and we owe it to our nation to rapidly evolve and develop our capacity to defend. Our Airmen should be extremely proud of their contributions to their country today."

"The men and women of Vandenberg work diligently to execute launches efficiently, and we remain committed to providing robust support to our mission partners," Air Force Colonel Bob Reeves, the 30th's vice commander and who oversaw the actual launch, added. "Overseeing today's launch operations in the Western Range Operations Control Center reminded me of just how remarkable our Airmen and partnerships are. To every member of Team V that had a hand in ensuring this launch ran smoothly, from planning to execution, I am honored to have worked alongside every single one of you."

The Pentagon has issued its own brief written statement, which is as follows

On Thursday, Dec. 12, 2019, at 8:30 a.m. Pacific Time, the U.S. Air Force, in partnership with the Strategic Capabilities Office, conducted a flight test of a prototype conventionally-configured ground-launched ballistic missile from Vandenberg Air Force Base, California. The test missile exited its static launch stand and terminated in the open ocean after more than 500 kilometers of flight. Data collected and lessons learned from this test will inform the Department of Defense's development of future intermediate-range capabilities.

Some have noted that the Castor 4 motor is not currently in production, though Northrop Grumman Innovation Systems still lists it in its catalog as "inactivate production," suggesting that it could be possible to restart making them, if necessary. Another motor from the company's existing line could still have been employed,  such as the Orion 50S XLG.

Beyond that, Secretary of Defense Mark Esper has indicated that it is unclear when the U.S. military might field a new IRBM. "Once we develop intermediate range missiles and if my commanders require them then we will work closely and consult closely with our allies in Europe, Asia and elsewhere with regard to any possible deployments," he told reporters later on Dec. 12, 2019.

The National Defense Authorization Act for the 2020 Fiscal Year that the House just passed, and that looks set to pass in the Senate and then become law, also withholds funding for actually buying and deploying any such missiles until the U.S. military submits various reports answering these basic questions.