In less than a week, the United States has killed a number of terrorists in two separate strikes, each time using a shadowy AIM-114R9X Hellfire missile, which substitutes a center section with six swing-out sword-like blades in place of the missile's traditional high-explosive warhead. This represents half of all confirmed strikes involving the employment of this missile and roughly a third of all reported instances of the weapon being used at all operationally. Yet, even so, its very existence remains highly secretive despite clear evidence that it excels in reducing collateral damage, putting it in a category of munitions the U.S. military has been very keen to promote publicly in the past.

The target of the latest strike on the road between Afrin and Azaz was reportedly an individual who went by the nom de guerre Abu Sanad and acted as a facilitator and fixer, smuggling individuals for various groups in and around northern Syria. At the time of the strike, he was carrying an identification card from Ahrar al-Sham, a militant group fighting against Syrian dictator Bashar Al Assad that has received support from Turkey, among others, were the targets.

However, Hayat Tahrir Al Sham, or HTS, an organization that broke off splintered from the Syrian arm of Al Qaeda in 2017, reportedly claimed that Abu Sanad had left Ahrar al-Sham and was working with ISIS. The strike on Dec. 3 reportedly killed at least one senior member of HTS, raising questions about whether this individual had ISIS ties, as well.

The U.S. military captured a significant amount of information on senior members of ISIS during the raid on a compound in northwestern Syria that led to the death of the group's leader Abu Bakr al-Baghdadi in October. It is possible that these strikes were, in part, driven by that intelligence. There are still unanswered questions about how al-Baghdadi managed to flee from Iraq to northwestern Syria in recent years and individuals like Abu Sanad are likely to have been part of that puzzle.

However, the AGM-114R9X, which was developed at some point during President Barack Obama's two terms in office, according to The Wall Street Journal, continues to exist only behind a wall of secrecy that does not seem to apply to any other Hellfire variant. The U.S. military has openly acknowledged the existence of at least four other known AGM-114R9 subvariants, the R9B, R9E, R9G, and R9H.

It's not entirely clear how exactly they differ from the standard AGM-114R or the original AGM-114R9 subvariant. Production of the original R variant began in 2010 with the missile offering a multi-purpose warhead and the ability to work on both manned and unmanned platforms at various altitudes, thereby replacing a variety of earlier versions optimized for different platforms and target sets.

The AGM-114R's warhead is capable of breaking through armor and hardened cover, such as the walls of buildings, as well as attacking personnel and other soft targets in the open, thanks to a sleeve over the main charge that would break up into a hail of deadly shrapnel when the missile explodes. The AGM-114R9B and 9E, by all accounts, still have a high-explosive warhead and appear to be in use with both regular and special operations units.

There is no official information of any kind publicly available about the AGM-114R9X. The very first pictures to emerge apparently showing the internal blade mechanism appeared on social media on Dec. 3, which The War Zone was first to report on. What guidance and fuzing systems the weapon uses, necessary to ensure its extreme accuracy and optimal deployment of the blades, remain unknown.

In previous our analysis of the Dec. 7 strike, we posited that a so-called "man-in-the-loop" guidance system, something Israel pioneered and perfected, with an actual operator correcting its course in the terminal phases of flight is a likely possibility. Another option could be a very fine-tuned imaging infrared guidance package that zeroes in on a specific section of a car automatically.

The video below shows a view from the guidance system on an Israeli-made Spike missile, a man-in-the-loop design.

Beyond its exact specifications and capabilities, the weapon's very use has been a closely guarded secret. Before the events of this past week, there was only photographic evidence of one other known instance where the U.S. government had carried out a strike using this missile, in 2017, when it killed Al Qaeda's then-number two leader Abu Khayr al Masri, again in northwestern Syria. At the time, The War Zone was the first to suggest that his death could have been the work of a new, novel munition.

In May 2019, The Wall Street Journal broke the story about the existence of AGM-114R9X and its folding blade arrangement, stating that another AGM-114R9X had killed Jamal al-Badawi in January 2019. Al-Badawi had been a member of Al Qaeda's franchise in Yemen and had been the alleged mastermind behind the deadly bombing of the U.S. Navy's Arleigh Burke class destroyer USS Cole in 2000.

The Journal's sources said that the U.S. military had employed AGM-114R9Xs on no more than six occasions in total at the time it published its piece. By all indications, drone units subordinate to the Joint Special Operations Command (JSOC) had been responsible for all of those strikes. It is unclear how many additional strikes the Central Intelligence Agency (CIA) may have also carried out using its own unmanned aircraft. As the War Zone has reported extensively in the past, there are unresolved questions about whether there is overlap in administrative and operational control of drone units supporting JSOC and CIA missions.

It's not clear at all why, given the AGM-114R9X's track record, it has been used so sparingly and has been kept in the black world, squirreled away from disclosed special operations units and regular forces, both of which could potentially make good use of its capabilities. This is the exact opposite of how the U.S. military has treated the development of many other munitions designed to reduce the risks to innocent bystanders. This includes BLU-126/B Low Collateral Damage Bomb, which simply has less explosive than a traditional bomb, and the BLU-129/B Very Low Collateral Damage Weapon, which has a carbon-fiber body that disintegrates when it goes off and limits its blast radius. You can read more about both of these 500-pound class bombs in this past War Zone piece.

Conscious of the negative impacts on the reputation of the United States abroad from the inadvertent killing of civilians during airstrikes, as well as the damage it could do the perception of American forces engaged in those conflicts, the U.S. military has every reason to promote such munitions as further evidence of the steps it takes to prevent civilian casualties. It also publicly highlights the development of novel less-than-lethal systems for the same reasons. At the same time, the concept behind and the results of an AGM-114R9X strike might still be too gruesome to publicize. It's hard to argue that dying by an explosive blast or pummeled to death by a sword-wielding weapon traveling at hundreds of miles an hour is all that different, but the almost cartoonish design of this weapon could be considered questionable in terms of optics.

There may be practical limitations, as well. If the missile does use a man-in-the-loop guidance system, there would need to be an entire architecture, including compatible data links and ground terminals, in place to support that capability.

Cost could be a factor, with the average price of an AGM-114R, including R9B and R9E variants, was around $115,000 each between Fiscal Years 2014 and 2015, according to U.S. military budget documents. Still, even if AGM-114R9Xs are expensive compared to other Hellfires and are available in limited quantities – issues that apply equally to the BLU-129/B – it's hard to see a good reason not to at least make them available in small numbers to a broader swath of deployed units. Increased production of the missiles would also help reduce unit prices.

Whatever the reasons for the AGM-114R9X's limited availability and use in the past, those restrictions appear to be increasingly loosening up now, with three strikes involving the weapon this year and the two in Syria within just the past seven days. 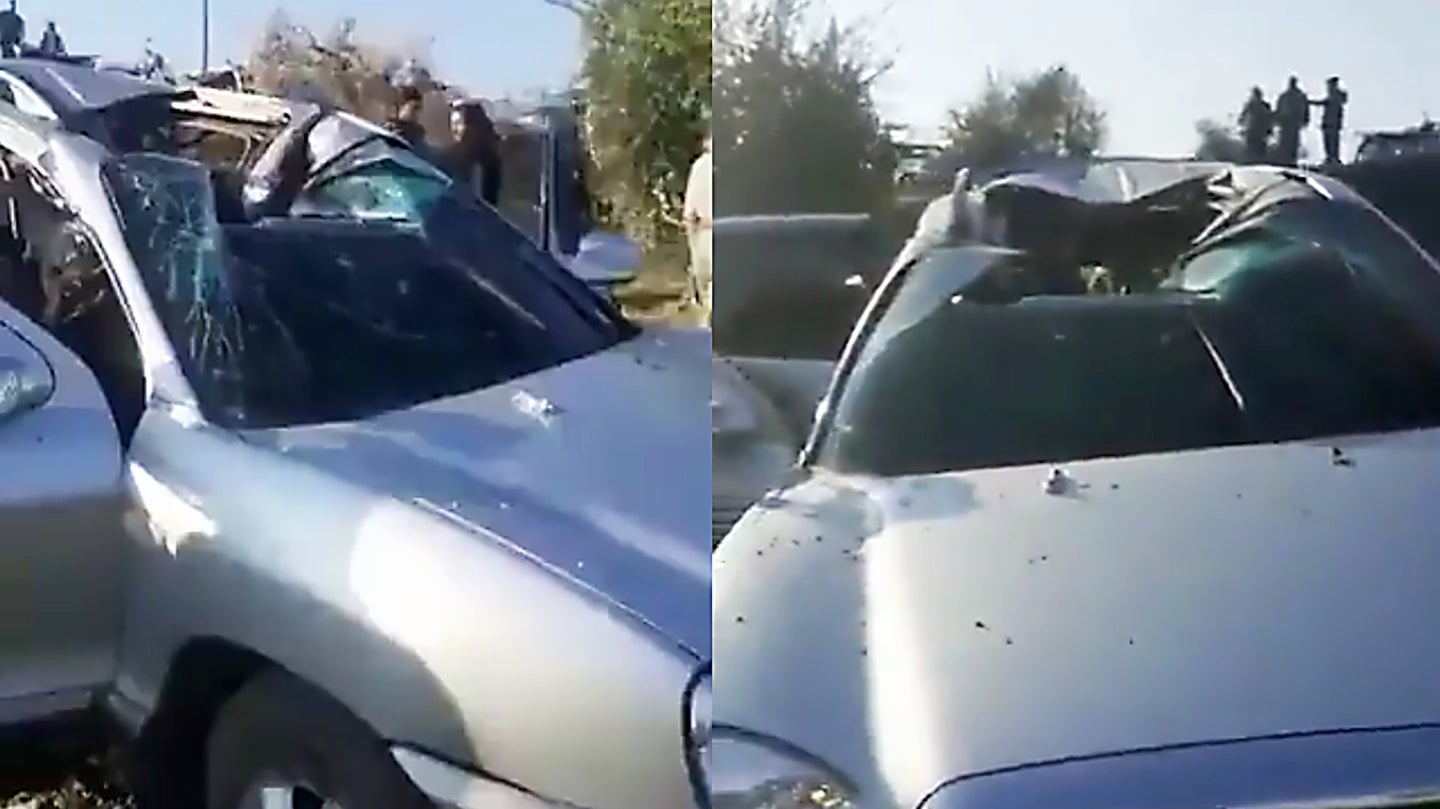 For the second time this week, the secretive AGM-114R9X Hellfire missile has punched a hole through a car’s roof and sliced its target to death. 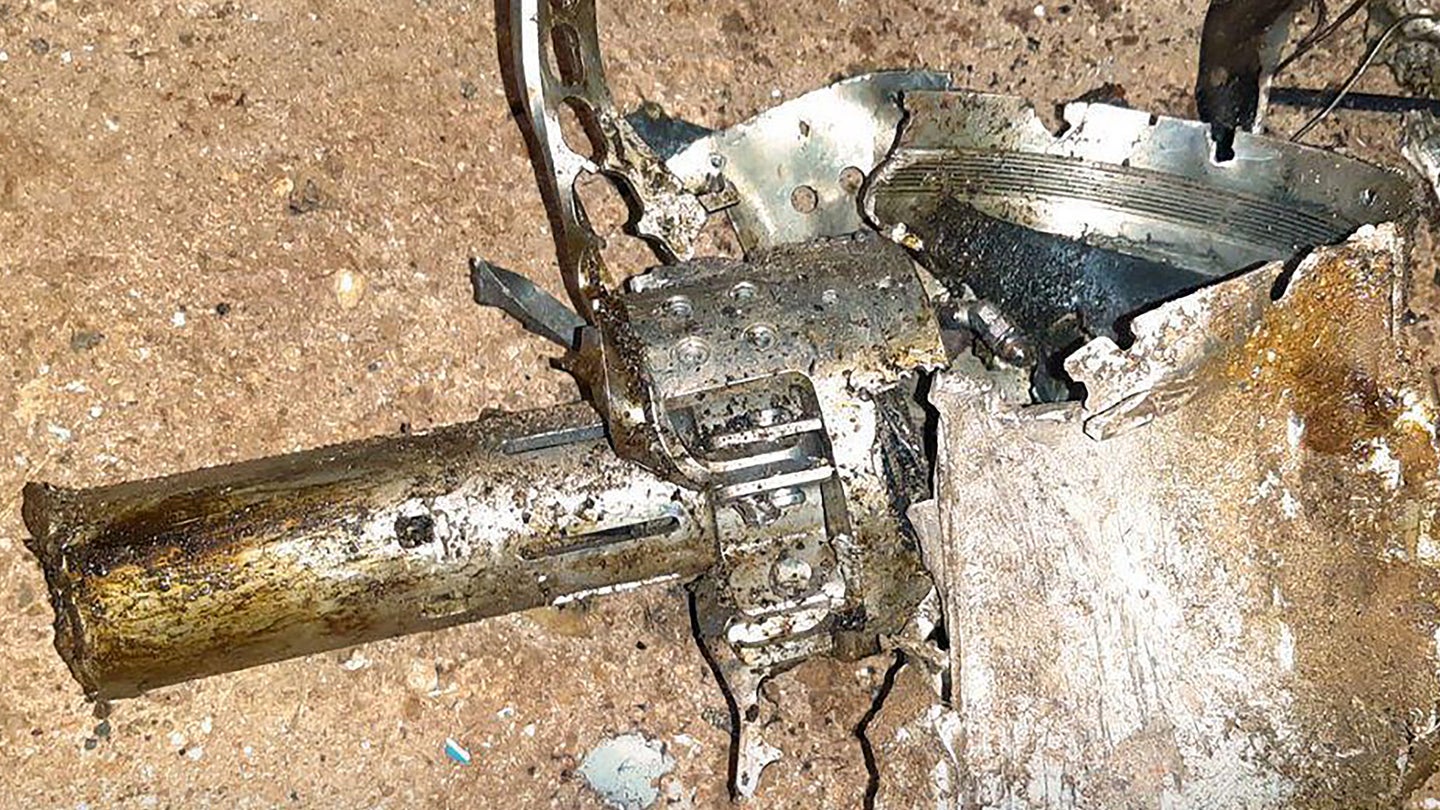 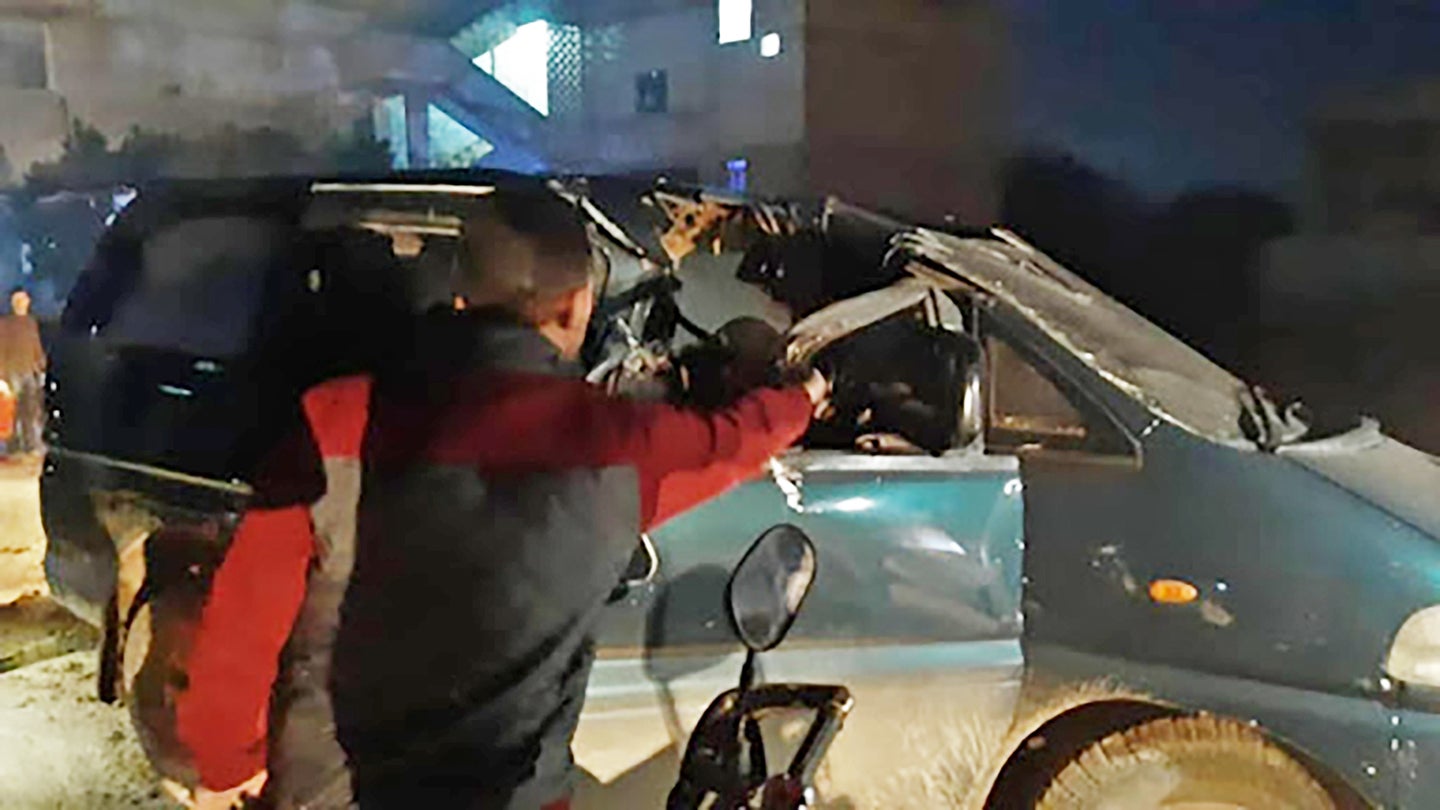