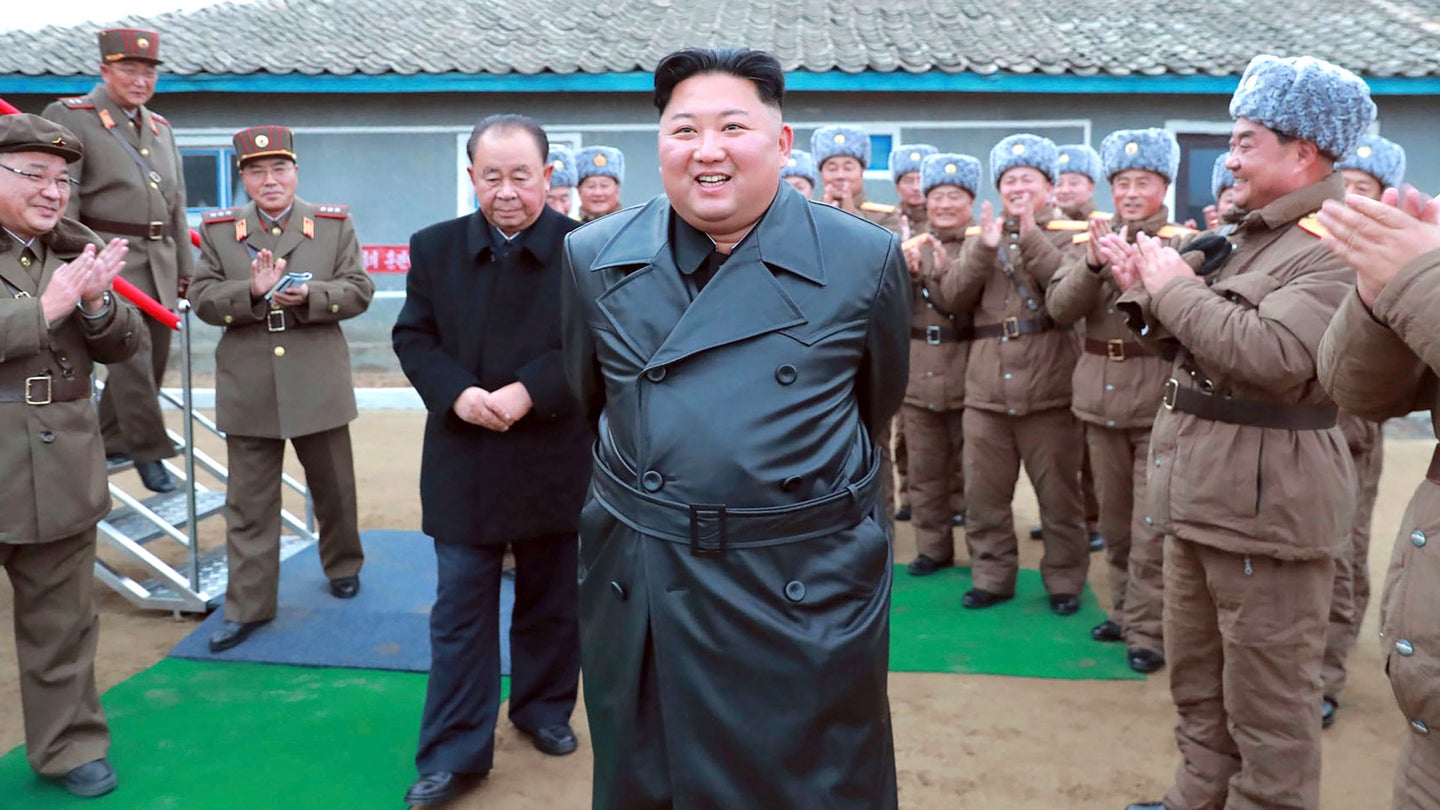 North Korea says that it has conducted a "strategic" test, likely of a large rocket motor, at a site it had previously partially dismantled as a good will gesture as part of negotiations with the United States over its ballistic missile and nuclear weapons programs. This is the latest sign of the deteriorating detente between the two countries that followed a historic summit between U.S. President Donald Trump and North Korean dictator Kim Jong Un in 2018. Tensions have been steadily rising in recent months with the regime in Pyongyang recently threatening to send the U.S. government a provocative "Christmas gift," almost certainly a reference to the potential of a new test of a long-range ballistic missile or even a nuclear weapon.

On Dec. 8, 2019, the North Koreans confirmed that the test had occurred the day before at the Sohae Satellite Launching Ground in the northwestern corner of the country. Experts had already seen what they believed to be evidence of imminent testing at the site on in satellite imagery from Dec. 5.

"A very important test took place at the Sohae Satellite Launching Ground on the afternoon of December 7, 2019," a spokesperson for North Korea's Academy of National Defence Science said in a very brief statement. "The results of the recent important test will have an important effect on changing the strategic position of the DPRK once again in the near future."

North Korea has not offered any details about what it tested or released pictures or video from the event, which typically follow tests and demonstrations of ballistic missiles and other major weapon systems. Sohae has been used to test large rocket motors for ballistic missiles and satellite launch vehicles (SLV), as well as for actual SLV launches, in the past. The North Koreans had begun dismantling parts of Sohae following the 2018 Summit between Trump and Kim, but rebuilt some of those facilities earlier this year.

The U.S. government has consistently held the view that the SLV developments and launches at Sohae were actually a cover for work supporting North Korea's long-range ballistic missile programs, including the crafting of an intercontinental ballistic missile (ICBM). the North Koreans demonstrated their first ICBM, the Hwasong-14, on July 4, 2017. They followed this up with the launch of the larger Hwasong-15 just shy of five months later.

The use of the word "strategic" in regards to this latest test at Sohae strongly points to it being part of the development of an improved variant of an existing missile, such as the Hwasong-15, or an all-new long-range ballistic missile. This would also fit with other statements North Korea has made recently.

“The dialogue touted by the U.S. is, in essence, nothing but a foolish trick hatched to keep the DPRK bound to dialogue and use it in favor of the political situation and election in the U.S.,” Ri Thae Song, North Korea's Vice Foreign Minister of U.S. affairs, said on Dec. 3, 2019, using an acronym for the country's official title, the Democratic People's Republic of Korea. “What is left to be done now is the U.S. option and it is entirely up to the U.S. what Christmas gift it will select to get.”

At the time, North Korea had also mockingly described the 2017 Hwasong-14 launch as a "gift" to the United States on the occasion of the July 4th holiday.

"It can be said that Abe is the only one idiot in the world and the most stupid man ever known in history as he fails to distinguish a missile from multiple launch rocket system while seeing the photo-accompanied report," a North Korean state media report declared in November, referring to Japanese Prime Minister Shinzo Abe. Abe had talked about the threat posed by Pyongyang's ballistic missiles following a North Korean test of a very large artillery rocket system.

"Abe may see what a real ballistic missile is in the not distant future and under his nose," that story continued.

Some experts have posited that what North Korea tested at Sohae last week as part of work on a new ICBM with a solid-fuel rocket motor. The Hwasong-15, as is the case with all the other known missiles designated in the Hwasong series, have liquid-fuel motors.

North Korea has made significant investments, and seen real progress, in the development of large solid-fuel rocket motors for both ground- and submarine-launched ballistic missiles in recent years. Solid-fuel rockets generally make for missiles that are faster and easier to launch than equivalent liquid-fuel designs.

Combined with a mobile transporter-erector-launcher, this means that land-based solid-fuel missiles can be employed on shorter notice from various locations, making it harder for an opponent to detect preparations for a launch, and then potentially try to take action before it occurs. Solid-fuel missiles are also historically easier and safer to store in a ready-to-launch configuration for protracted periods of time, making them particularly well suited to submarine-launched applications.

The launch of North Korea's first solid-fuel ICBM would certainly send a major message to North Korea's opponents, chiefly the United States, and make clear that the country is still improving and expanding its nuclear deterrent capabilities. It would also be another significant demonstration of the country's ability to keep developing new and increasingly advanced weapon systems in spite of sanctions and international criticism.

It is also possible that the North Koreans could test a more intermediate-range solid-fuel ballistic missile. This would still be provocative and threatening to U.S. allies in the Pacific, as well as the strategic American island Guam in the Western Pacific, which Pyongyang has threatened to strike in the past.

With this in mind, a ground-based variant or derivative of the Pukkuksong-3 would be a logical next step. It could also serve as an intermediate stepping stone to a solid-fuel ICBM, while still providing Pyongyang with new and important additional capability in the meantime.

Other "Christmas gift" options might include the launch of multiple ICBMs simultaneously, demonstrating North Korea's ability to launch a salvo strike at extreme ranges, a launch of even a single ICBM in a particularly provocative manner, such as over Japan's Home Islands or toward Guam, or even a new nuclear weapons test. Another submarine-related test, or showing the country's newly converted ballistic missile submarine in the water or at sea, is another possibility.

It's unclear how the United States might respond to any such provocations. For months, the U.S. government has been downplaying smaller ballistic missile and artillery rocket launches, saying that they do not violate the spirit of North Korea's self-imposed moratorium on long-range missile and nuclear tests. Pyongyang put that policy into place in 2017 as part of an easing of tensions that led to the first summit between Trump and Kim.

At the same time, North Korea has been very clearly frustrated by the lack of progress in negotiations with the United States, especially over sanctions, an issue that was central to the collapse of the second Trump-Kim meeting in Vietnam earlier this year. Kim and other senior North Korean officials have repeatedly said that they could be forced to take a "new path," seen as a threat to end its missile and nuclear weapons moratorium, if the Trump Administration does not meet its demands.

On the day of the test at Sohae, Kim Song, North Korea's ambassador to the United Nations, said that "denuclearization" was off the table and that Pyongyang was not interested in any future "lengthy talks" with the United States. The  U.S. and North Korean governments explicitly disagree on what "denuclearization" means with regards to the Korean Peninsula, with the Trump Administration insisting for more than a year now that Kim Jong Un agreed to give up his nuclear weapons at the 2018 summit with Trump.

However, North Korea has made it painfully clear that it is using a long-standing definition of "denuclearization" which refers to a more complex process of "removing" the nuclear threat to the regime that the United States poses. This would include a final peace deal to formally end the Korean War and the removal of all U.S. troops from South Korea, among other demands.

"Kim Jong Un is too smart and has far too much to lose, everything actually, if he acts in a hostile way," Trump wrote in a pair of Tweets on Dec. 8, implying the potential use of military action against the North Korean regime. "He signed a strong Denuclearization Agreement with me in Singapore."

Trump has long taken a conciliatory tone toward Kim personally and the North Koreans have returned the favor in a clear attempt to try to use that relationship to win concessions. However, following these Tweets, and the U.S. President's recent re-use of the nickname "rocket man" for Kim, North Korea and its state media outlets have launched their own renewed attacks on the American leader.

On Dec. 9, Kim Yong Chol, who has served as one of the primary negotiators with the United States and previously ran the country's top intelligence service, as well as Ri Song Yu, the Vice Chairman of the Central Committee of the Workers' Party of Korea, both issued inflammatory screeds targeting Trump. "Trump might be in great jitters, but he had better accept the status quo that he has sowed, so he should reap, and think twice if he does not want to see bigger catastrophic consequences," Ri wrote.

North Korea's renewed testing at Sohae, which it partially dismantled in 2018, a goodwill gesture to Trump, is itself something of a signal that what is left of its patience is wearing thin.

Now, of course, North Korea does not have the capacity to triumph over the United States in a major conflict, but that's not to say that a war between the two wouldn't be devastating for all parties involved, including South Korea and Japan. Still, North Korea is clearly turning up the pressure in hopes that it will finally be able to wrest eased sanctions and other concessions it wants from the Trump Administration. In November, the U.S. military did cancel a major exercise with the South Koreans explicitly with the hope that it could create space for renewed diplomacy with the North.

Trump, who is facing impeachment as of the result of a political scandal, which is still very much evolving, could be inclined to try to cut a deal of some sort with North Korea in order to achieve a political victory. At the same time, the President could see taking a harder stance against an increasingly belligerent regime in Pyongyang as providing the same domestic political benefits. The course of action could include more sanctions and other activities, possibly including covert actions such as cyberattacks, which the North Koreans would certainly decry as "hostile" and not in keeping with the spirit of the Kim-Trump summits. This would only further ratchet up tensions and increase the risk of miscalculations on both sides.

At the moment, both sides look firmly entrenched in their respective positions, making it unlikely that, even if they return to a period of detente in the future, it won't come before the end of the month. It seems increasingly inevitable that Kim will send some kind of "Christmas gift" to Trump, though it remains to be seen whether it will be a solid-fuel ICBM test or something else.