Something of a mystery has emerged after a brief lockdown of the White House and U.S. Capitol due to an alleged violation of the heavily restricted airspace over Washington, D.C. this morning. Reports now indicate that a flock of birds, a weather balloon, or something else besides a plane or helicopter, appears to have triggered the alert, which sent fighter jets and helicopters scrambling into the air. Whatever the case, the incident underscores the very real challenges involved in protecting the skies above the nation's capital, and short-range air defense, in general, especially as novel threats, such as increasingly capable small unmanned aircraft, continue to emerge and evolve.

Some of the first reports of a potential aerial threat emerged just before 8:30 AM local time in Washington, with the U.S. Capitol Police and U.S. Secret Service subsequently restricting access to various sites and telling individuals at the White House and Capitol Building to shelter in place. Within 45 minutes, the U.S. Capitol Police said that the situation had passed "without incident" and the lockdowns ended shortly thereafter.

Before the lockdowns ended, the U.S.-Canadian North American Aerospace Defense Command (NORAD), responsible for coordinating the defense of airspace in both countries, including over Washington, D.C., Tweeted out that "We have tasked aircraft to respond. More details to follow."

"Senior officials across the interagency are monitoring the situation on a national event conference call. NORAD aircraft are on site and responding. Plane is not considered hostile at this time," the command said in a second Tweet that it subsequently deleted for unspecified reasons. U.S. Northern Command posted a nearly identical version of this statement on Twitter, which is still available. Pentagon spokesperson Lieutenant Colonel Chris Mitchell also told CNN virtually the same thing at the time.

At the time of writing, neither the Pentagon, U.S. Northern Command, nor NORAD has issued an official press release regarding the incident. "NORAD responded to an event in the Special Flight Rules Area surrounding Washington D.C. this morning. NORAD directed @USCG rotary wing aircraft to investigate and the event was resolved without incident," NORAD said in another Tweet at 12:50 PM, local time.

The U.S. Coast Guard rotary-wing asset was almost certainly that service's MH-65 Dolphin helicopter that is based at Coast Guard Station Washington, D.C., which is collocated with the U.S. military's Joint Base Anacostia-Bolling. This helicopter also operates at times from a separate site at Reagan National Airport. The MH-65, among its missions in the area, is on call to specifically to intercept low-and-slow moving targets.

Fox News also reported that unspecified fighter jets and a U.S. Capitol Police helicopter responded to the incident. It's not immediately clear if the Capitol Police has a helicopter and this may have been the Coast Guard's MH-65. The fighter jets in question were almost certainly the F-16C Vipers from the D.C. Air National Guard that sit on alert at Andrews Air Force Base in order to respond to just these kinds of situations.

The AN/TWQ-1 is more typically seen mounted on a Humvee, but can be positioned in fixed emplacements, as well. It is armed with the two four-round launchers for the FIM-92 Stinger missile and a .50 caliber M3P machine gun. National Advanced Surface-to-Air Missile Systems, or NASAMS, which include ground-based launchers that fire the AIM-120 Advanced Medium-Range Air-to-Air Missile (AMRAAM), are also part of this greater integrated air defense network around Washington, D.C.

As for the actual target that these assets were search the sky for, at no point during the incident did any U.S. government agency identify the threat beyond the statements that it was a "plane," which NORAD, at least, has now deleted. Sam Sweeney, a D.C. Morning and transportation reporter at ABC7 television in Washington, subsequently Tweeted out, citing unnamed sources, that a "flock of birds appearing on radar" had been the real culprit.

An unnamed NORAD spokesperson told NBC News that "a flock of birds or a weather balloon" might have been responsible. However, "the comments you’re seeing about a flock of birds is speculation,” another unidentified NORAD public affairs officer told Gizmodo after those initial reports. "I cannot confirm or deny that it was a flock of birds," they added.

The employment of the MH-65 to intercept whatever it was that appeared on the radar screens indicates that the target, real or not, was seen as moving low-and-slow. This is backed up by another CNN report, citing an unnamed U.S. Capitol Police source that described the radar track as a "slow-moving blob." That same story said that another unidentified U.S. government official said that the Federal Aviation Administration had said that air traffic controllers never saw the alleged track on their radar screens, either.

Additional reporting from Fox News indicated that it might have even come to a virtual stop, "hovering" over a particular part of Washington, for a brief moment. Yet another unnamed source told this outlet that it might have been a "weather anomaly."

While it still remains unclear exactly what happened and why, the incident, and these sometimes conflicting reports, highlight the difficulties the U.S. government faces in protecting the nation's capital against aerial threats, especially smaller and unmanned aircraft. This had already become notably apparent after Doug Hughes, a former postal worker turned political activist, infamously flew a gyrocopter into D.C.'s restricted airspace and landed on the Capitol Building's lawn in 2015. He had hoped to deliver letters to every member of Congress in protest of what he said was widespread corruption and dysfunction. Hughes subsequently pled guilty to one felony charge and spent 120 days in prison, followed by a year of probation.

That incident had called into question the utility of one sensor system that seemed ideally suited to detecting exactly this kind of intruder. The Joint Land Attack Cruise Missile Defense Elevated Netted Sensor System, or JLENS, a radar system on a tethered aerostat that was already long-troubled at the time. JLENS was supposed to use its elevated position to have a better chance of spotting small, low-flying threats, such as cruise missiles.

A JLENS system had gone into operation at the U.S. Army's Aberdeen Proving Ground in Maryland, some 60 miles to the northeast of Washington, on an experimental basis just a month before Hughes' flight to the capital. The Army subsequently said that JLENS hadn't been operating that day at all.

The U.S. government did subsequently make improvements to the air defense network in and around Washington, D.C., an area referred to collectively as the National Capital Region. This included the addition of systems better suited to spotting and tracking targets with smaller radar cross-sections, such as ultralight aircraft and drones.

Unfortunately, that increased sensitivity to small targets also increases the chances of false alarms, which appears increasingly likely to be what occurred in this most recent incident in the skies above the nation's capital, whether it was a bird, a balloon, or something else. It's possible that in the wake of the unprecedented mass suicide drone and cruise missile attacks on oil-related infrastructure in Saudi Arabia in September that U.S. forces in the National Capital Region are on especially high alert with regards to anything that could be a similar type of attack.

Depending on the exact circumstances, a flock of birds, for instance, might look the same to radars as a swarm of drones. It would also hardly be the first time that radars have mistaken large birds for potential threats. In one particularly notable instance in the 1950s, a formation of Canadian geese triggered an alert from personnel working NORAD's Distant Early Warning (DEW) Line radar network, who initially mistook them for a mass of Soviet bombers.

When it comes to the air defense network around Washington, D.C., even if it does detect a real threat, how to respond remains complicated. Firing surface-to-air or air-to-air missiles at a target over a heavily populated area, especially at a low-flying target, raises inherent risks of causing collateral damage. Employing automatic cannons or machine guns from aircraft or emplacements on the ground still present dangers to innocent bystanders.

There is also the question of whether large scale attacks, especially those involving groups or fully networked swarms of small drones, would simply overwhelm these defenses. This is major issue for the U.S. military, among others, on the battlefield, as well, something you can read about in more detail in this past War Zone feature. A multitude of potential solutions, many of which would be complementary in a layered air defense network, are emerging, including various combinations of sensors, electronic warfare countermeasures, and weapon systems, including lasers and high-power microwaves. Some of these systems have already become part of the expanding defense ecosystem for countries looking to protect critical domestic sites or events that may be in or near sprawling urban areas. That's a trend that will only continue in the future.

All told, whether it was a flock of geese, a weather balloon, or something else floating in the air that triggered today's lockdowns in Washington, D.C., the incident shows the complexities of protecting the skies above the seat of the U.S. government, as well as what the United States has already done to mitigate those threats and where there might be room for even further improvement. 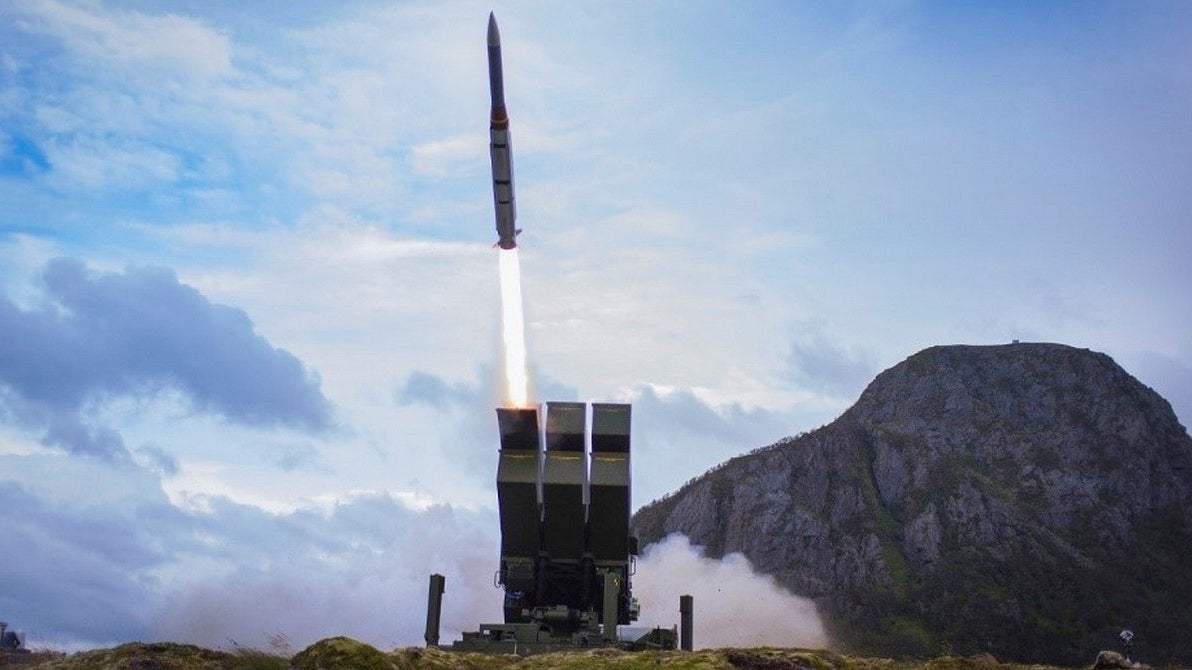 Qatar To Get New AMRAAM-ER Surface To Air Missiles, U.S. Capital May Be Next

The hybrid missile design will give the same SAM system that protects Washington, D.C. a major boost in range and over overall performance.