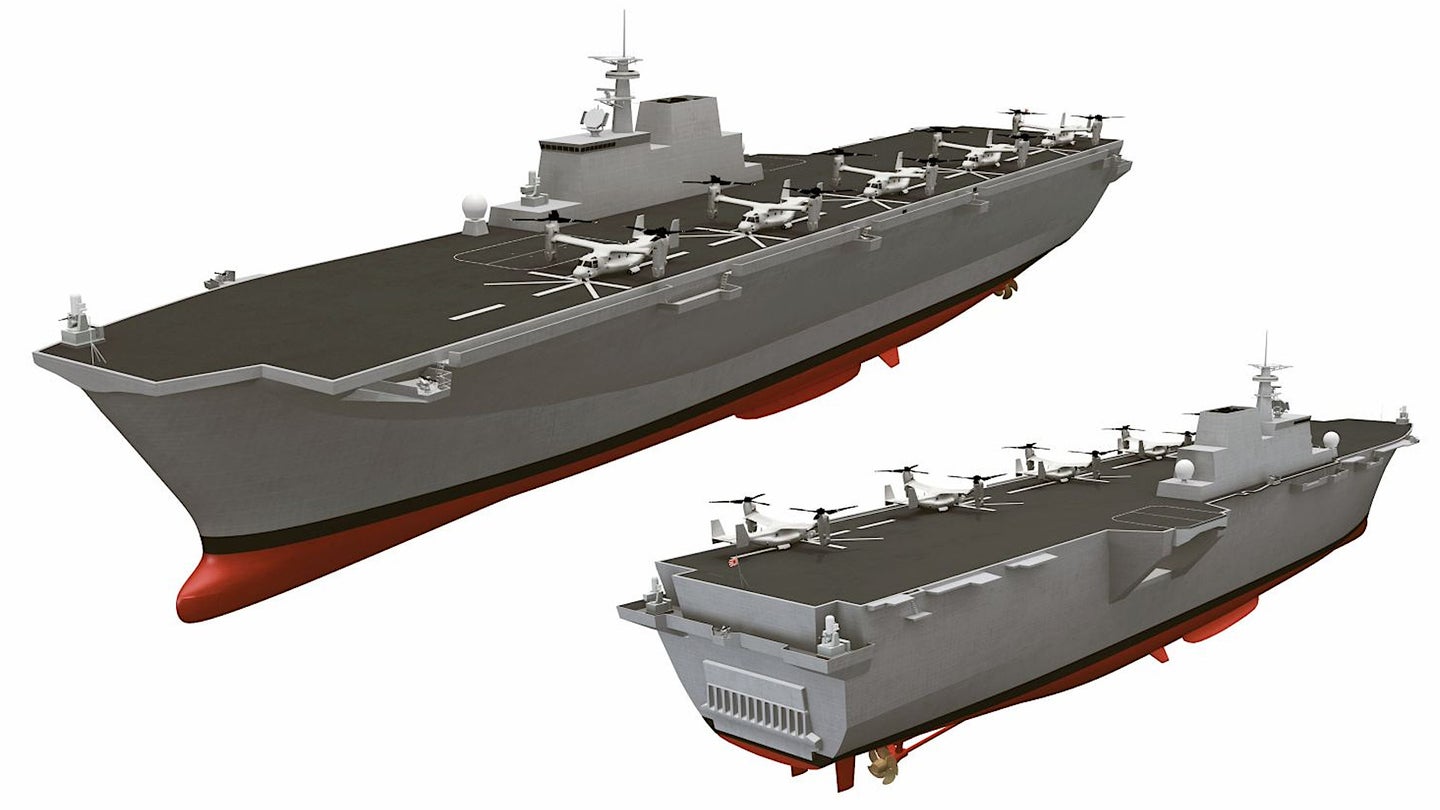 A Japanese shipbuilder has unveiled a design for a future landing helicopter dock amphibious assault ship, or LHD, that it plans to pitch to the Japan Maritime Self-Defense Force, or JMSDF. Though the Japanese government has not publicly expressed an interest in such a vessel, this pitch comes as the country is working to expand its maritime and amphibious capabilities, with particularly notable plans to modify its Izumo class "helicopter destroyers" to support robust naval aviation operations that will include detachments of F-35B Joint Strike Fighters. Japanese authorities can not have missed China's launch of its first new, massive Type 075 LHD earlier this year or that South Korea is also exploring the possibility of acquiring a new, larger landing platform helicopter amphibious assault ship, or LPH, either.

The Japan Marine United Corporation, or JMU, revealed the LHD design at the DSEI Japan 2019 exhibition, which ran from Nov. 18 to Nov. 20, 2019. Japan's Universal Shipbuilding Corporation and IHI Marine United Inc. merged to become JMU in 2013. IHI had received the contract to begin building the first-in-class Izumo and JMU was subsequently responsible for the construction of that ship, as well as its sister ship, the Kaga. IHI had also previously built the two smaller Hyuga class helicopter destroyers for the JMSDF.

JMU says that its LHD design, at present, would have a displacement of approximately 19,000 tons and an overall length of around 720 feet, according to Jane's 360. This would make it substantially smaller than China's Type 075 or South Korea's proposed LPH-II design, as well as the U.S. Navy's Wasp class, which serves as a benchmark of sorts for large LHDs.

The ship will have a large flight deck on top capable of supporting Japan's V-22 Osprey tilt-rotors, as well as helicopters. Japan received its first Osprey in 2017 and has plans to eventually acquire a fleet of 17 of them.

The LHD would have a well deck below that can accommodate up to two American-made Landing Craft Air Cushions (LCAC), according to JMU. The ship will also be able to conduct roll-on/roll-off operations in a more traditional port setting.

One graphic that JMU release of the LHD concept shows it carrying five Ospreys on its main flight deck and another five in hangars below. The same image shows the ship carrying a load of BAE Systems AAV7A1 amphibious tracked personnel carriers and 6x6 tactical trucks, as well as the pair of LCACs.

JMU has not said how many personnel the ship could carry in total, including the landing force, but has said that it would have a standing crew of around 500. There is also no word yet on what other notable systems the vessel might have, such as radars, sensors, or weapons. The concept art the shipbuilder provided did show an extensive close-in protection suite with what appears to be three SeaRAM launchers for the RIM-116 Rolling Airframe Missile positioned at the stern and in front of the ship's island, as well as a Mk 15 Phalanx 20mm-Vulcan cannon-armed Close-in Weapon System (CIWS) on the forward deck.

A JMU representative told Jane's 360 that the JMSDF does not have a requirement for the LHD of any kind, but that the company was still expecting it to issue one in the coming years. It would certainly make good sense for that service to acquire this kind of capability sooner rather than later.

Just last year, the Japan Ground Self-Defense Force (JGSDF) stood up the country's first dedicated marine unit, the Amphibious Rapid Deployment Brigade, since the end of World War II. It is the only user of the AAV7A1 armored vehicles, which JMU made a point of saying that its LHD would be able to carry.

More than a decade ago, Japan began taking steps to create this unit primarily to address concerns about its ability to assert its claims over the disputed Senkaku Islands in the East China Sea. Protecting these islets, which China also lays claim to, during a potential conflict has been a major driver of other significant Japanese defense modernization efforts, including the Izumo class refit to accommodate the F-35B and the development of ground-launched hypersonic boost-glide vehicles.

At present, the Amphibious Rapid Deployment Brigade would have to largely rely on the JMSDF's three Osumi class amphibious warfare ships. Japan classifies as tank landing ships, but, with their well deck, these are closer in general configuration to what most navies would call landing platform docks.

In 2014, Japan did announce plans to refit these ships to be able to accommodate MV-22s and AAV7A1s. Even so, the capabilities of these vessels, which displace 14,000 tons with a full load and can carry just 330 troops each for long-duration operations. This means that all three could carry only around a third of the expected final size of the Amphibious Rapid Deployment Brigade at once. For shorter stints, these ships can carry up to 1,000 troops, but would still have relatively limited room for vehicles and other equipment.

As such, even with certain upgrades, the Osumis would remain limited capability-wise compared to the design that JMU is now offering to build. The Izumos and Hyugas could carry additional troops, as well as Osprey and helicopters, but again lack the well deck to deploy amphibious vehicles or LCACs carrying other heavy equipment.

For Japan, even a small fleet of LHDs could allow the Amphibious Rapid Deployment Brigade to flex its muscles more throughout East Asia and elsewhere in the Pacific, where the country has increasingly diverse security concerns. North Korea presents an immediate threat and has recently begun conducting increasingly worrisome missile launches, among other shows of force. This has already prompted Japanese authorities to make a number of defense-related investments, including the acquisition of Aegis Ashore missile defense sites equipped with Lockheed Martin's new AN/SPY-7(V)1 Solid State Radar. North Korean belligerence has also been a factor in the decision to integrate the F-35B onto the Izumo class ships.

Former Japan Self-Defense Forces Chief of Staff Shigeru Iwasaki had also said at the DSEI Japan exhibition that the "ballistic-missile defense function" of the Japan Air Self-Defense Force's existing F-35As has made them a particularly valuable addition to the country's military already, according to Aviation Week. What he was referring to was the Joint Strike Fighter's demonstrated ability to spot and track ballistic missile launches and feed relevant information back to command centers on the ground, such as those in the future Aegis Ashore facilities. This could become even more critical in the near future as a separate political spat between Japan and South Korea led to the latter to threaten to scrap an intelligence-sharing agreement that, in part, had provided a mechanism for the exchange of information about North Korean missile activity.

The current Japanese government has also shown that it is eager to be involved in challenging China's broad and controversial claims to the vast majority of the South China Sea and potentially expand its ability to conduct military activities further beyond its borders in service to Japan's broader foreign policy aims. The Amphibious Rapid Deployment Brigade is seen as an important component of these efforts and elements of the unit have been participating in increasing numbers of multi-national exercises in the Pacific region in recent years. Just in October, the brigade sent personnel to the Philippines to join that country and the United States in the annual Kamandag exercise.

There has been a push in recent years to amend the country's constitution to either eliminate Article Nine, which prohibits the country from engaging in any offensive military activities anywhere, or modify it substantially to give the Japan Self-Defense Forces greater leeway to operate regionally and globally. LHDs, supporting the Amphibious Rapid Deployment Brigade, would be valuable tools for projecting power far beyond Japan's home islands.

In addition, JMU made sure to point out that the LHD design would feature substantial onboard medical facilities and that it could support non-combat humanitarian assistance and disaster relief missions. This could be useful for Japan domestically, which is regularly in the path of extreme weather such as typhoons and tsunamis, such as the devastating 2011 Tohoku earthquake and tsunami, which led to a near-meltdown at the Fukushima Daini nuclear powerplant. These same capabilities could also make the ships important soft power tools for Japan and simply give the country additional capacity to aid its regional allies in the wake of disasters.

At the same time, JMU's LHD proposal may be more capability than the JMSDF might actually need or be able to make effective use of, especially if the country's constitution remains largely unchanged and prevents the service from taking on more offensive roles. Japan may decide it is more cost-effective to develop a smaller landing platform dock-style ship as a direct follow-on to Osumi class instead, which could then operate as part of a larger amphibious force in concert with the Izumos or Hyugas.

All told, it remains to be seen what a Japanese LHD might look like, or what its specific capabilities might be, or even if and when the country decides to purchase such a ship at all.