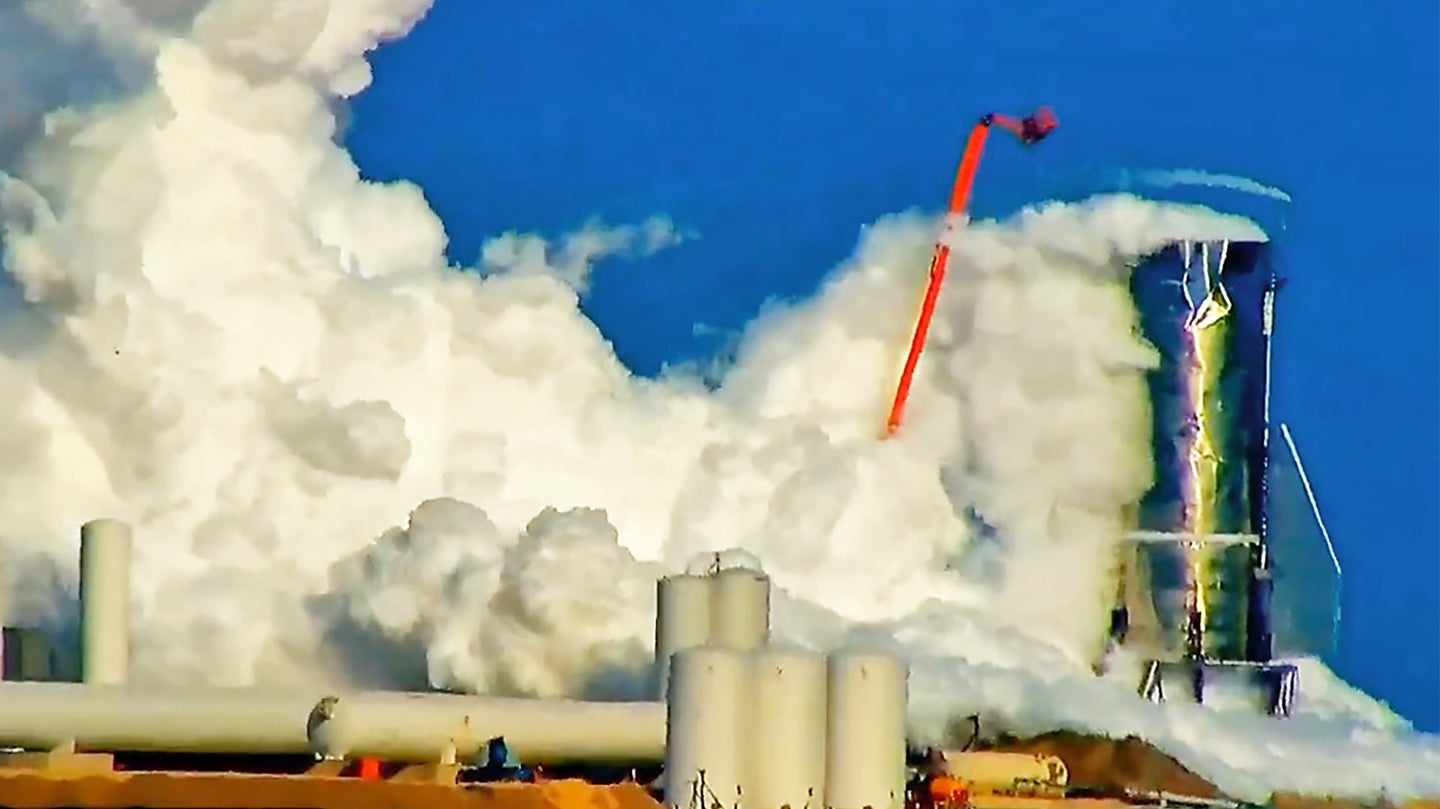 Details are still very limited, but SpaceX's Starship Mk 1 prototype suffered a serious accident during a ground test less than an hour ago. The space launch company is testing the prototype of the reusable spacecraft at its facilities outside of Boca Chica in southern Texas.

You can watch the mishap occur in the video below. It starts some 20 minutes before the end of this particular live stream from the site.

Pressure testing of prototype Starship Mk 1 reportedly began on Nov. 18, 2019. SpaceX's founder and CEO Elon Musk had formally unveiled the project in September 2019. The vehicle is the second stage of a two-stage-to-orbit reusable private space transportation system that the company hopes will support space tourism and other private space travel in the future.

The project has drawn considerable attention and there have been multiple 24/7 live streams of work being done at Boca Chica. Other views of the accident are already rolling in.

The craft's stainless steel body appears to have sustained significant damage in the incident. Musk touted the durability of the material repeatedly in the past, so maybe it will be able to be repaired.

Neither SpaceX nor Elon Musk has issued a formal statement about the accident yet, but the company's founder and CEO has responded to a Twitter post suggesting that the mishap might be a good time to simply move on to the next Starship prototype iteration rather than repair the existing Mk 1. Musk seemed to agree, replying "Absolutely, but to move to Mk3 design. This [the Mk 1] had some value as a manufacturing pathfinder, but flight design is quite different."

There's still no word yet on exactly what might have caused the explosion at the Boca Chica site.

SpaceX is also building a Mk 2 prototype at a different facility in Cocoa, Florida. This one apparently needed some work the other day to reposition a bulkhead that required individuals to take a sledgehammer to it.

SpaceX has now provided a statement to multiple outlets about the accident, which is as follows:

The purpose of today’s test was to pressurize systems to the max, so the outcome was not completely unexpected. There were no injuries, nor is this a serious setback.

As Elon tweeted, Mk1 served as a valuable manufacturing pathfinder but flight design is quite different. The decision had already been made to not fly this test article and the team is focused on the Mk3 builds, which are designed for orbit.

NASASpaceFlight.com has reported that the accident occurred during the first cryogenic load testing of the Mk 1 prototype. The outlet provided additional video that showed the top bulkhead being blown away from the main body and landing some distance away. The video also showed the bottom bulkhead failing.