Although the actual benefits of such a spectacle are dubious at best, six MiG-29s were seen flying in the air at the same time. 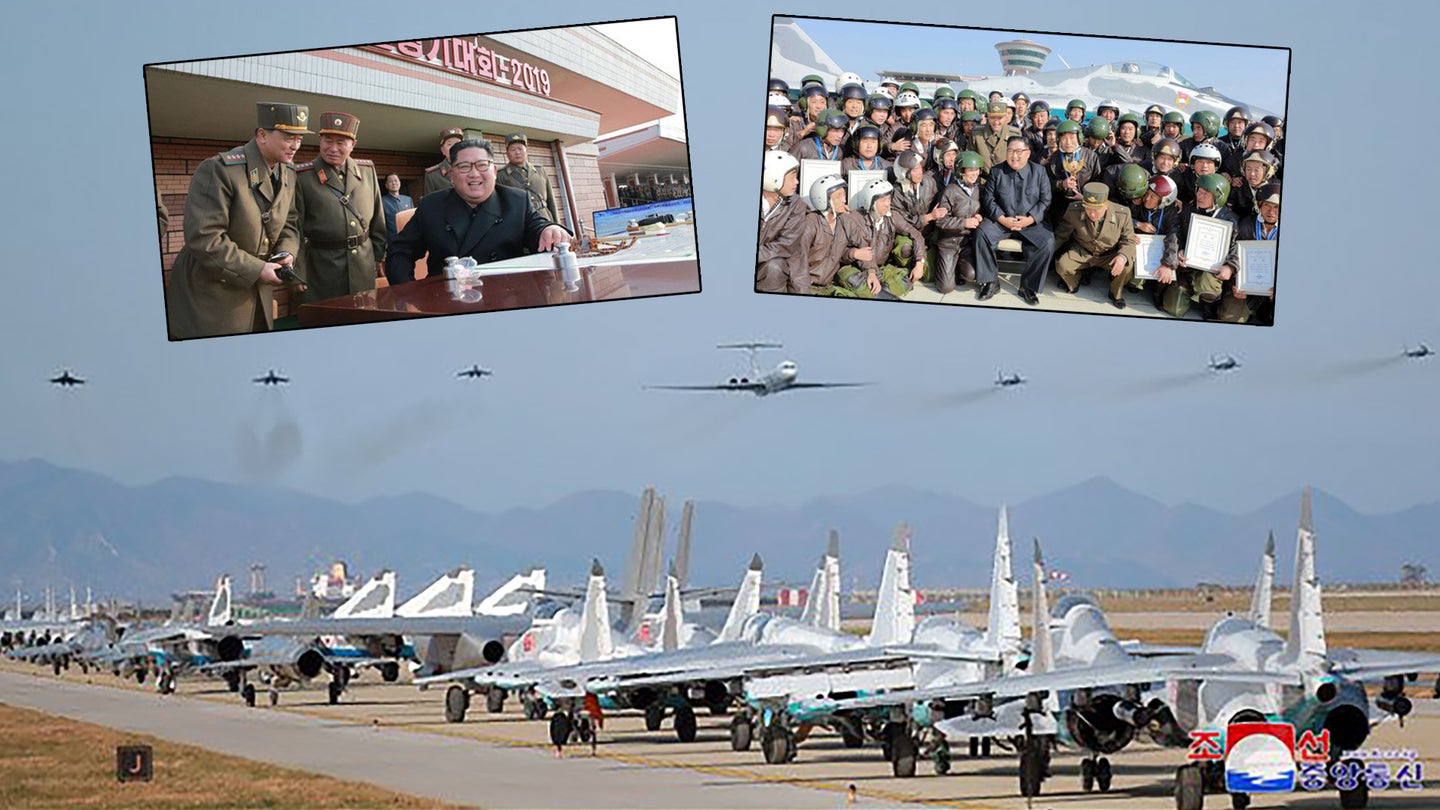 As the prospects of an ongoing dialogue with the U.S. over its ever-growing nuclear and missile programs continue to decline, Kim Jong Un visited North Korea’s Wonsan-Kalma International Airport to oversee what appears to be an unprecedented, at least in recent years, gathering of North Korean air power. Satellite images from November 11th showed a very large number of aircraft at the airfield, which pointed to some sort of high-profile event being imminent.

38North.org, which closely tracks activities in the Hermit Kingdom, reported the following on November 14th:

On imagery from November 11, there were four MiG-17 fighter aircraft, six MiG-15 fighter aircraft, fourteen Su-25 close support aircraft, six MiG-29 fighter aircraft and six Il-28 bomber aircraft observed on the tarmac north of the passenger terminal. On November 13, additional MiG-15 and MiG-17 were added to the display bringing their total to eleven MiG-15s and eight MiG-17s. Several small vehicles were parked on the tarmac near the MiG-29 and Il-28 aircraft. In addition, thirteen probable MiG-21 fighter aircraft were observed on the alert apron at the south end of the airfield, and six small, either Hughes 500 or Mi-2 Hoplite light helicopters, six medium, possibly Mi-8 or Mi-14, medium transport helicopters, and eight An-2 Colt light transport aircraft were parked along the auxiliary runway located on the southwest side of the airfield. Further to the south of the auxiliary runway at the rail transfer point, seven additional MiG-21 were parked on an adjacent apron. It could not be determined whether these aircraft are newly arrived, perhaps by rail, or whether they have been moved there for temporary storage.

Pyongyang, November 16 (KCNA) -- Kim Jong Un, chairman of the Workers' Party of Korea, chairman of the State Affairs Commission of the Democratic People's Republic of Korea and supreme commander of the armed forces of the DPRK, watched "the combat flight contest-2019 of the flight commanding officers of the Air and Anti-Aircraft Force of the Korean People's Army."

When Supreme Leader of the Party, state and armed forces Kim Jong Un came to Wonsan Kalma Airport, the venue, all the participants and the spectators broke into thunderous cheers of "hurrah!"

The commander of the Air and Anti-Aircraft Force of the KPA made an opening speech.

The flight commanding officers and the combat pilots fully demonstrated the invincible might of Kim Jong Un's flying corps by displaying the aviation they have trained during the ordinary days.

Whenever the flight commanding officers and the combat pilots showed admirable aviation with brave and flexible art of control, the Supreme Leader warmly acknowledged them, giving encouragement.

He expressed great satisfaction over the fact that the flight commanding officers and combat pilots took an active part in the contest and held enthusiastic contest, showing high aviation.

Our pilots have to try to fight the enemies armed to the teeth with great idea and tactics under any circumstances, the Supreme Leader said, adding that the result of the fight is not decided by the combat specification of arms and equipment but by for what and with what idea the fight is fought. He stressed that however loudly the enemies may brag about their technological advantages, they can never overwhelm the politico-ideological and combat and moral advantages of our service personnel.

The Supreme Leader underscored the need for all the pilots to get fully versed in the Juche-based air tactics and be fully ready for effectively applying them to operations and battles, adding that it is important for all the pilots to possess high level of aviation, bombing skill and marksmanship by systematically conducting flight drills on a normal basis under the simulated conditions of an actual war in the severest condition.

He indicated the orientation as regards the development of the air force weaponry of our own style to contain the armed forces of the enemy boasting of the technical advantages of their aircrafts, giving vital instructions in developing the Juche-based air force.

He congratulated the flight commanding officers who took part in the contest on their successes and had a photo session with them.

Among the spectators were leading officials of the Central Committee of the Workers' Party of Korea.

It isn't clear if any live-fire actually happened as the base is not a bombing range, but it is possible it did occur at a remote site. Up until 2016, the Korean People’s Army Air and Anti-Air Force Flight Drill Competition, a live-fire exercise, used to be the most prominent display of North Korea's antiquated air combat capabilities, but that high-profile drill has not occurred since. Sanctions, including those that have curtailed the country's fuel supplies significantly, are thought to have contributed to sidelining that exercise.

Still, Kim's well-established love affair with aviation has prompted other major aviation events, some of them quite peculiar, like the international air show Pyongyang put on in 2016. With this in mind, the reemergence of such a gathering, even if it was curtailed in scope, can be viewed as yet another act of defiance by Kim in the face of international sanctions.

Photos from the event are limited, with most showing Kim going about his visit as we have seen time and again, with arrival, commanding shots behind a desk, and photos with the rank and file. But one photo does show the rickety VIP configured IL-62M, "Kim Force One," doing a flyby flanked by no less than six MiG-29 Fulcrums. That is the most of the type, which are largely relegated to guarding Pyongyang, I have seen in the air together in many years. Three more MiG-29s are sitting on the ground in the image, as well. It is thought that North Korea has around 35 MiG-29s, which were acquired in the 1990s, although how many are airworthy at any given time is certainly just a fraction of that number.

Regardless of any "juche-based tactics," the North Korean Air Force stands zero chance at surviving even a very short period of time against a modern air combat force, like that of the U.S. or South Korea. In fact, it's most lowly and diminutive types pose more of an actual threat to South Korea than its fighters and attack jets. Kim isn't delusional regarding this, but North Korea's air force acts as a powerful propaganda tool and events like this are more about projecting a measure of power and keeping the military itself satisfied than about honing relevant combat skills.

North Korea's weak and antiquated air arm is another reason why Kim's investment in the country's nuclear program has been so extreme. As North Korea's conventional capabilities continue to atrophy, its nuclear one becomes all that much more critical.

Just as North Korea's own air exercises were wrapping up, one of Kim's top cronies and the man who had led talks with the U.S., Kim Yong Chol, warned that there would be "shocking punishment" if the U.S. proceeds as planned with its own upcoming wargames with South Korea. The hypocrisy of such an assertion would only be true if the North's recent air excercise was anything but a token drill that served more as a propaganda setpiece and for the personal enjoyment of the "Young General" than anything else.

Our friend @CivMilAir posted some additional shots of the MiG-29/IL-62 formation: