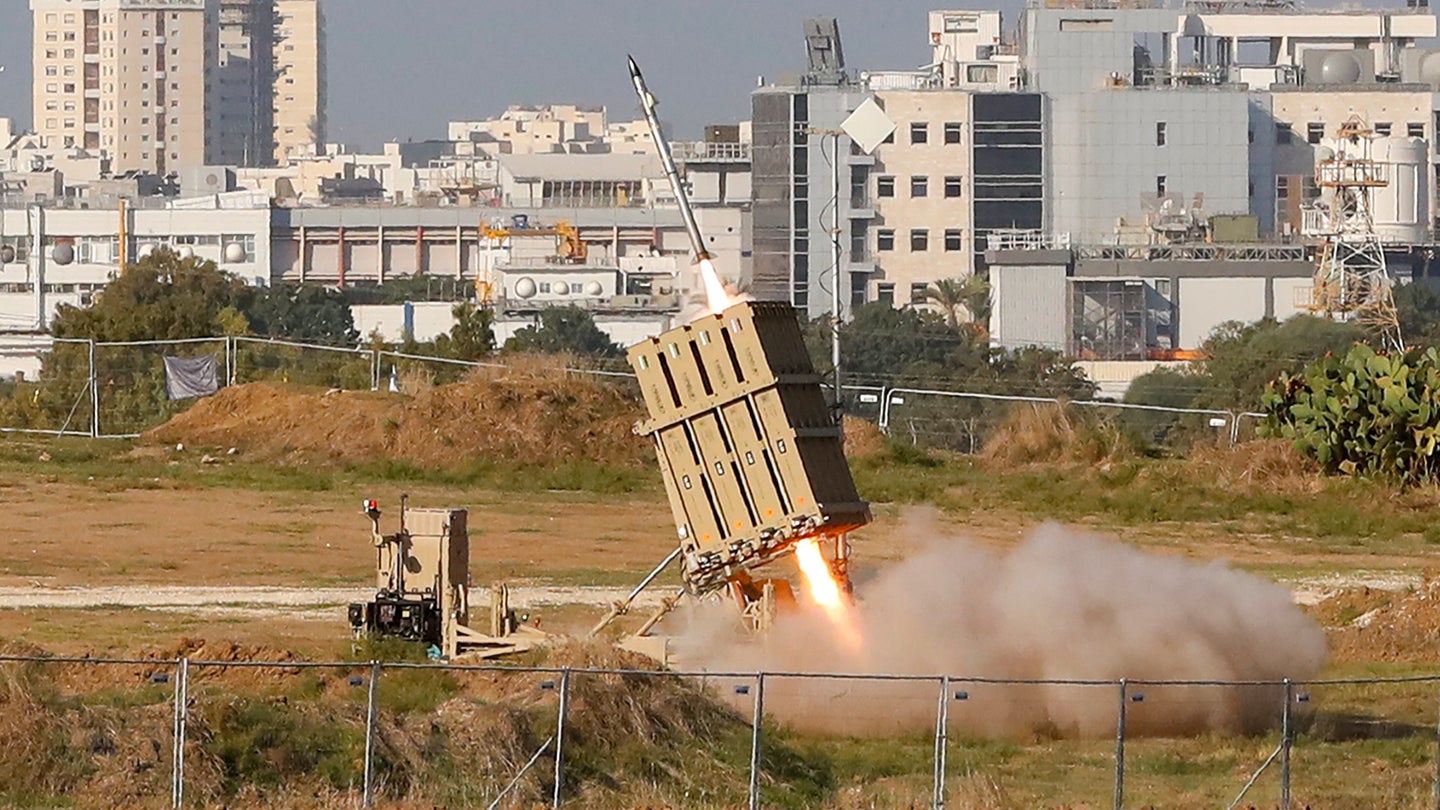 Just hours after we posted a story about a report that an Israeli Stunner surface-to-air missile used in the David's Sling medium-range air defense system fell into Syrian territory and was transferred by the Assad regime to Russia, images have appeared on social media showing what appears to be the intact fuse section of a Tamir interceptor used by the Iron Dome system. This proximity fuse system is highly advanced as it has to detect a small and fast-flying target—a rocket in most cases—and detonate the missile's warhead with perfect timing in order to destroy it. It is also highly miniaturized yet hardened enough to withstand the extreme G forces sustained by the super-maneuverable interceptor.

UPDATE: Upon further review of the photos, I actually believe the section includes the missile's active radar seeker, as well. That seems to be the component hanging out of the front of the tube. In other words, this would be the entire seeker and fuse section forward of the fins. Obviously, the loss would be even more significant if this is indeed the case.

Tamir uses a very sensitive active radar seeker and a command data-link system to chase down an incoming rocket. These components and its onboard autopilot get the missile within extremely close range of its target, at which time the missile's proximity fuse system detects the object as it begins to pass abeam the missile and detonates the onboard warhead, blasting it out of the sky. The missile is so agile and accurate that often times it actually slams into the incoming target, but it is not designed as strictly a hit-to-kill weapon by any means.

Check out the images of the interceptor in the tweet below:

As is common on many air-to-air missiles, the fuse system is located in a collar arrangement on the forward body of the missile, behind its seeker. A 360-degree staring laser system is used to sense the nearby target as it enters into the warhead's lethal range. It then triggers command logic that orders the detonation of the high-explosive warhead, which erupts outward in a ring of shrapnel in a wedge shape pattern around the missile. We don't know precisely what components are used on the Tamir's fuse system, but it is described by its manufacturer as "unique."

As we discussed in our article on the claimed loss of the Stunner missile to Russian intelligence, there is potentially a high price of using highly advanced weaponry in combat that goes beyond the normal factors. The potential for massive technological and intellectual property loss is very real. Even the most advanced missiles fail, as do highly complex aircraft. When they do, they can literally fall right into a foe's hands where they can be studied on a hardware and even software level and potentially reverse engineered. At the very least, knowhow gleaned from tearing the components apart can be integrated into the enemy's own industrial knowledge base and countermeasure initiatives.

Each Iron Dome missile costs between roughly $40,000 and $100,000, depending on who you ask. Two missiles are usually launched at each target to increase the probability of kill. Often times large throngs of Tamirs will stream out of Iron Dome batteries during a large barrage, or even by mistake, resulting in an almost otherworldly light show in the sky. It is truly an amazing capability to behold. The missiles are meant to self destruct if they do not engage a target, destroying the missile and its components beyond recovery, but clearly, that doesn't always work as intended.

Iron Dome batteries have been very active in recent days as tensions between Israel and factions in Gaza have spiked following the targeted assassination of Palestinian Islamic Jihad leader Baha Abu al-Ata earlier in the week. Over 450 rockets have been fired since then. As such, Iron Dome has been extremely active in trying to intercept rockets that pose a threat to populated areas.

We have no idea where this laser fuse component ended up or where exactly it was found in Gaza and by who, but it serves as another reminder that what goes up must come down, and sometimes it does so very much intact.