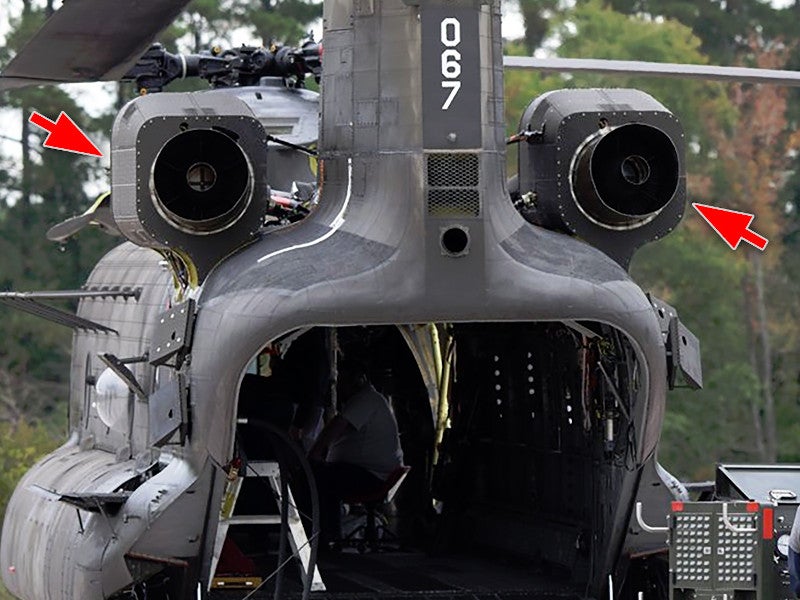 A picture has emerged of a Boeing CH-47 Chinook helicopter fitted with a pair of powerful General Electric T408 engines. The company had said in May that it was preparing to flight test a Chinook equipped with these engines, which are the same ones found on Sikorsky's troubled, but immensely powerful CH-53K King Stallion.

The official Twitter account for the U.S. Army's Combat Capabilities Development Command's Aviation and Missile Center, which is situated at Redstone Arsenal in Huntsville, Alabama, posted a shot of the rear of the modified helicopter, which has the tail number 067, on the social media site on Nov. 12, 2019. The Tweet also included a view of the same helicopter from the front, but taken at a different time when it had no engines installed at all.

At present, the Army is not actively pursuing this re-engine effort for its own Chinooks as part of the larger Block II upgrade program. However, the Tweet said that Aviation and Missile Center and Boeing have partnered together to test the engine installation. It is not clear if this is occurring under a traditional research and development contract or as part of some other form of a partnered agreement, such as a cooperative research and development agreement, or CRADA.

The picture does show that the T408s use entirely new nacelles with a more square shape, as compared to the circular ones associated with the Honeywell Aerospace T55s found on existing Chinooks. The nacelles also feature reinforcement bars between them and the helicopter's fuselage.

The Army did fund the development of the necessary fuselage reinforcements, as well as an updated drivetrain, as part of the Block II upgrades. This could make it easier for the service, as well as any other country buying Block II CH-47Fs, to decide to add the new engines onto the helicopters at a later date. The full Block II update also includes new rotor blades and a revised fuel tank configuration, among other improvements.

It's not clear whether or not the helicopter has flown yet in this configuration. The picture appears to show personnel on the ground conducting tests or otherwise performing work.

"We're getting it ready to fly," Chuck Dabundo, the H-47 program manager at Boeing, had told reporters during a media tour in May 2019, according to Rotor and Wing International magazine. However, he did not say when, or where, the first flight might take place.

A CH-47F with T408s had the potential to be significantly more capable than the helicopter in its existing configuration, which already has very good speed, payload, and hot-and-high performance. The General Electric engines each produce 7,500 shaft horsepower (SHP), around 2,500 SHP more than the T55-GA-714As on standard F models. Boeing has said that the Block II CH-47Fs will already have increased performance compared to the original F variants even without the new engines.

A T408-equipped CH-47F still won't have the same lifting power and maximum payload capacity of Sikorsky's CH-53K, but it is possible that the new engines could close that gap and make the upgraded Chinooks much more attractive when compared to the extremely expensive and troubled King Stallion. This has already raised questions in Congress about whether the Marines should consider the CH-47F as an alternative to the CH-53K, a debate you can read about in more detail in this past War Zone piece.

Boeing could easily pitch Chinooks with new engines to future operators and offer refits to countries that already have CH-47 fleets. The Chinook has a well-established operator base and sales have continued to be relatively steady in recent years, with the U.S. government just approving another prospective sale of CH-47Fs to the United Arab Emirates last week. India just began receiving its first Chinooks earlier this year. Israel and Germany are also actively looking for helicopters to replace their aging Sikorsky CH-53 Yasurs and CH-53Gs, respectively, and have narrowed down their searches to the CH-47F and the CH-53K.

With this picture showing that tests of the new engine configuration are proceeding, hopefully we will learn more about this exciting upgrade for the venerable Chinook soon.