The War Zone has written extensively about how the aviators of the U.S. Army's elite 160th Special Operations Aviation Regiment are experts in flying through especially challenging environments, including hazard-filled urban areas, and at very low levels in the dark, in order to insert special operators where ever they might need to go. This even includes dispensing them right on moving trains. A recent official video showing one of the Night Stalker's AH-6 Little Birds using a rope ladder to extract an individual from the water reminds us that they're just as capable of getting American personnel out at the end of a mission or in an emergency as getting them in.

The U.S. Army Special Operations Aviation Command (ARSOAC), which oversees the 160th among other units, released the video on YouTube on Nov. 3, 2019. The caption does not say where or when the video was shot or offer any additional context, but it was probably part of a training course, a larger exercise, or some other form of capability demonstration or test. Based on their helmet and other gear, the individual clinging onto the ladder appears to be playing the role of a downed aviator.

Using rope ladders to extract as well as insert personnel from helicopters certainly isn't new. American helicopter units have used such systems extensively since the Vietnam War, especially to get troops, including small teams of special operators, in and out constrained areas where they could not safely land to pick them. This also allowed the helicopters to avoid more obvious landing sites, which might have been booby-trapped already and where they would be especially vulnerable, regardless. During that conflict, the U.S. military also developed various other alternative insertion and extraction options, including rappelling and the Stabilized Body (STABO) rig, which evolved into the Special Patrol Insertion/Extraction (SPIE) concept that you can read about in more detail in this past War Zone piece.

What's interesting in the case of this particular video is the use of an armed AH-6 Little Bird instead of an MH-6, which the 160th employs as small personnel transports. Unlike the MH-6s, the AH-6s do not have external planks for personnel to ride externally to and from an objective. The video shows the helicopter in this particular instance flying away with the individual it just pulled out of the water simply holding on to the ladder as they hang below.

Having the individual below hang on definitely isn't ideal for any sort of long-duration flight, especially if they are injured. However, it would provide an immediate option for removing them from imminent danger and flying them even a short distance to a landing zone that might be safer or otherwise more accessible to more suitable rescue assets. Another helicopter, like one with a rescue hoist and/or open cabin space, fixed-wing aircraft, or vehicles on the ground, could then bring them to their final destination.

The idea of using attack helicopters as improvised rescue platforms when there are no other immediate options isn't unheard of, either. A particularly notable example occurred in January 2007, when four U.K. Royal Marines strapped themselves, two each, to the sides of British Army AH-64 Apache, to try to save the life of one of their comrades who had gotten seriously wounded in an attack on a Taliban position in Afghanistan. They flew to the scene of the fighting riding on the fairings on either side of the cockpit, jumped off after landing, and then secured the injured individual to the outside of one of the gunships in the same position. Sadly, Royal Marines Lance Corporal Mathew Ford died in transit.

Six months later, the U.S. Army employed the same general tactic in Iraq to successfully rescue a wounded soldier, also using an AH-64 Apache. In that case, the crew of the gunship put the injured individual in the co-pilot's seat, and the co-pilot rode strapped to the outside of the helicopter. Army Apache pilots had already rescued two downed pilots in that country in a similar fashion back in 2004, as well.

There are also instances of U.S. Marine AH-1 Super Cobras performing similar rescues with the individuals riding on the side of the forward fuselage seated on an open ammunition bay door. This is a tactic that also dates back to the introduction of the AH-1 during the Vietnam War. A number of foreign attack helicopters have procedures for executing similar emergency operations and Russia's Mi-24 Hind series actually has a small passenger cabin that can be used for a similar purpose, if need be.

It's not clear how regularly the 160th's AH-6 crews train to perform this kind of mission, but it makes good sense to have this as a sort of backup personnel recovery capability. Depending on the exact size and weight of the rope ladder, it's possible that the 160th's armed Little Birds regularly carry that piece of equipment just in case they're the only aircraft available and in range to attempt such an extraction.

If you're an American special operator or downed pilot and you need to get out of a rough spot, hanging on to a rope ladder dangling from an AH-6 Little Bird might not be your first choice for a to safety, but it would still be a welcome option if there's no way for a more traditional rescue party to get to you quickly.

A reader has reached out to let us know that the flexible ladder the AH-6 crew employed in this case is not technically a rope ladder, but is a caving ladder, which uses steel cable and aluminum rungs. 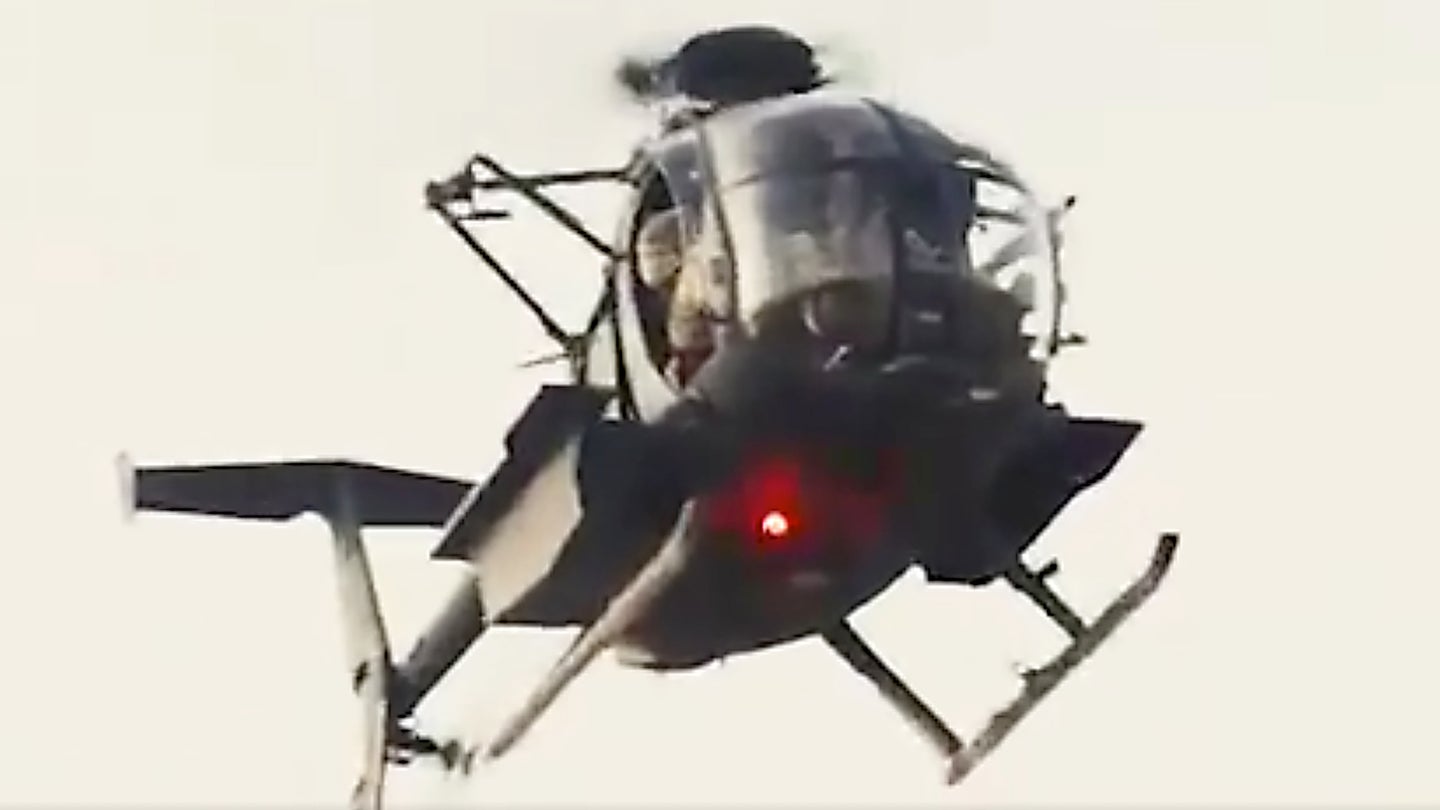 The novel enhancement gives the Little Bird a critical range extension while still allowing it to execute its core mission unimpeded. 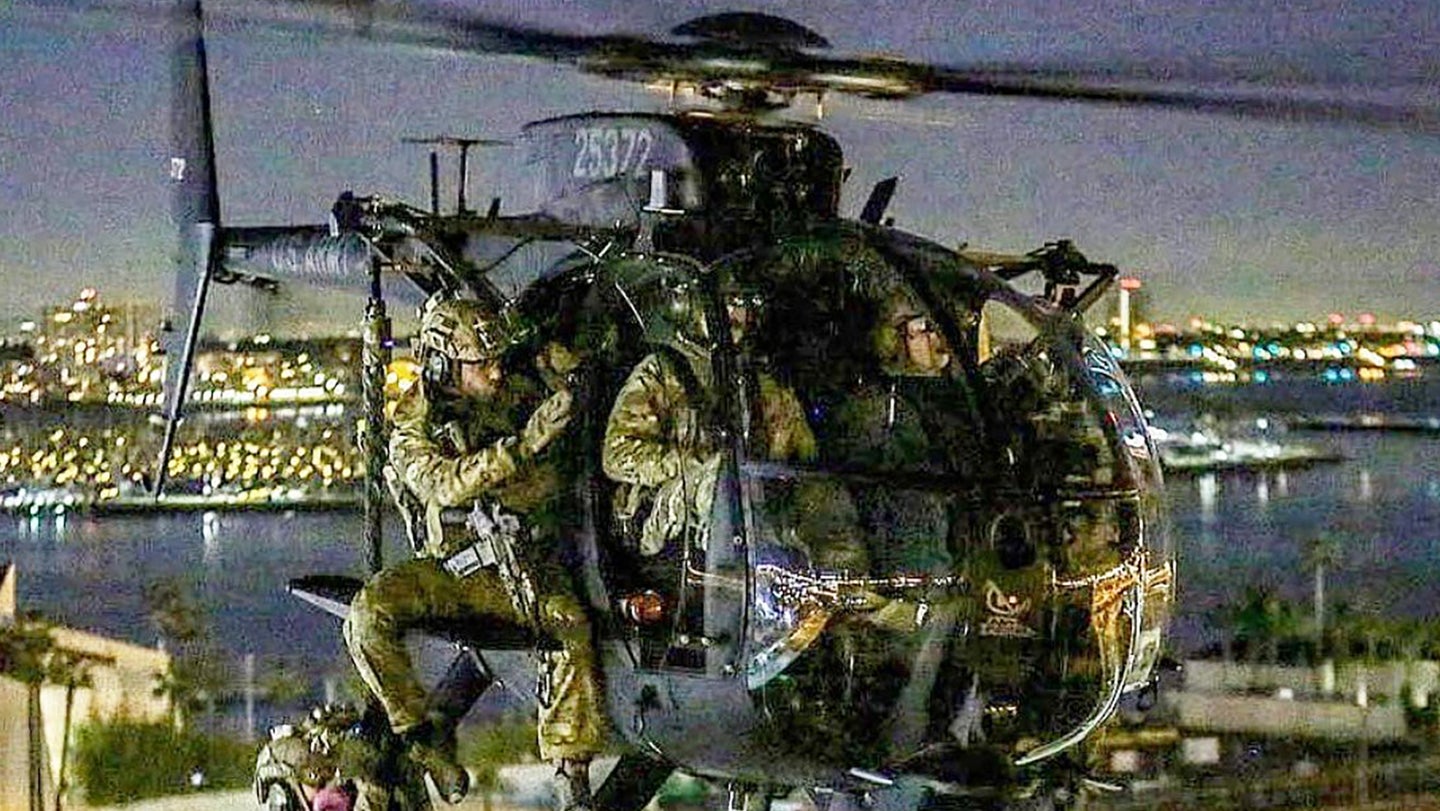 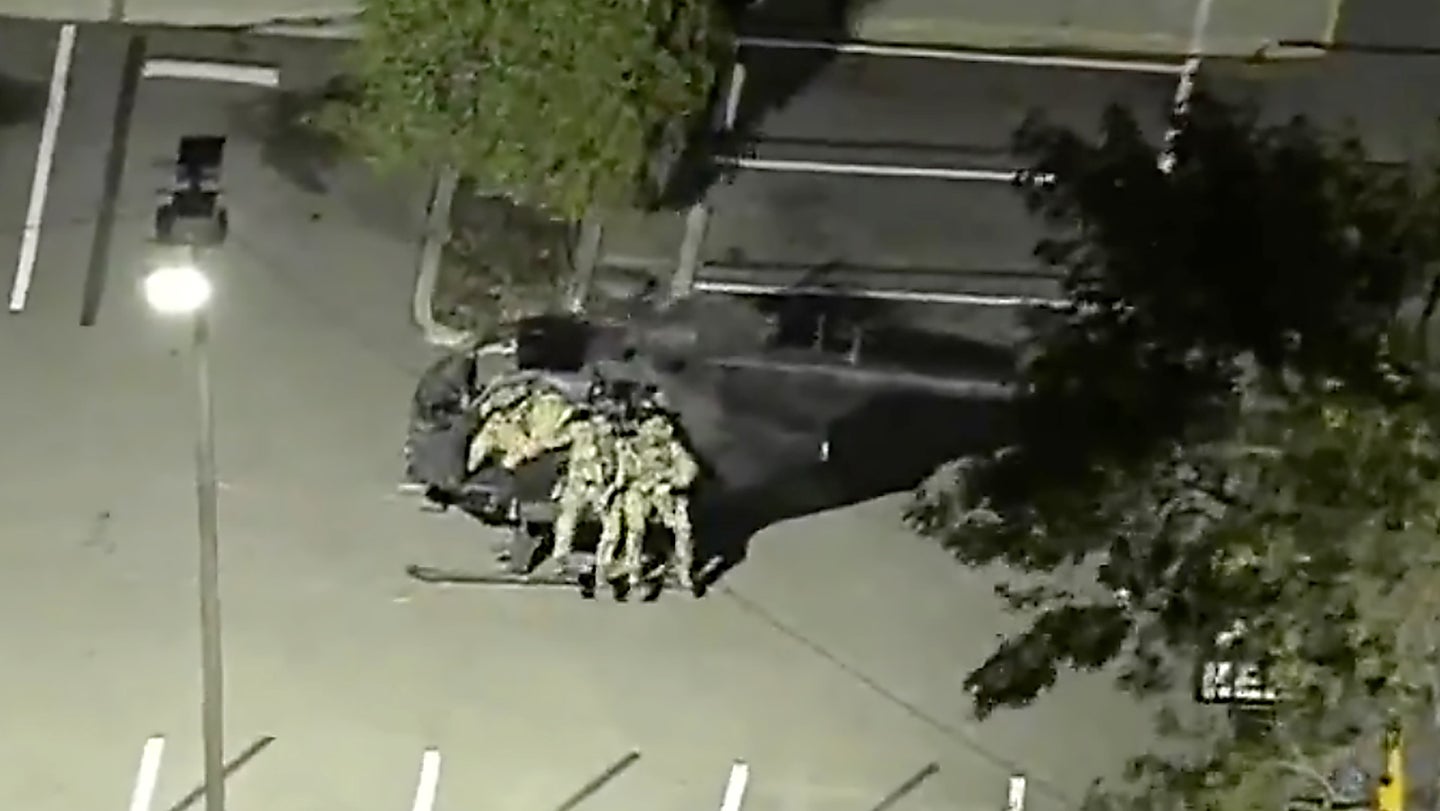