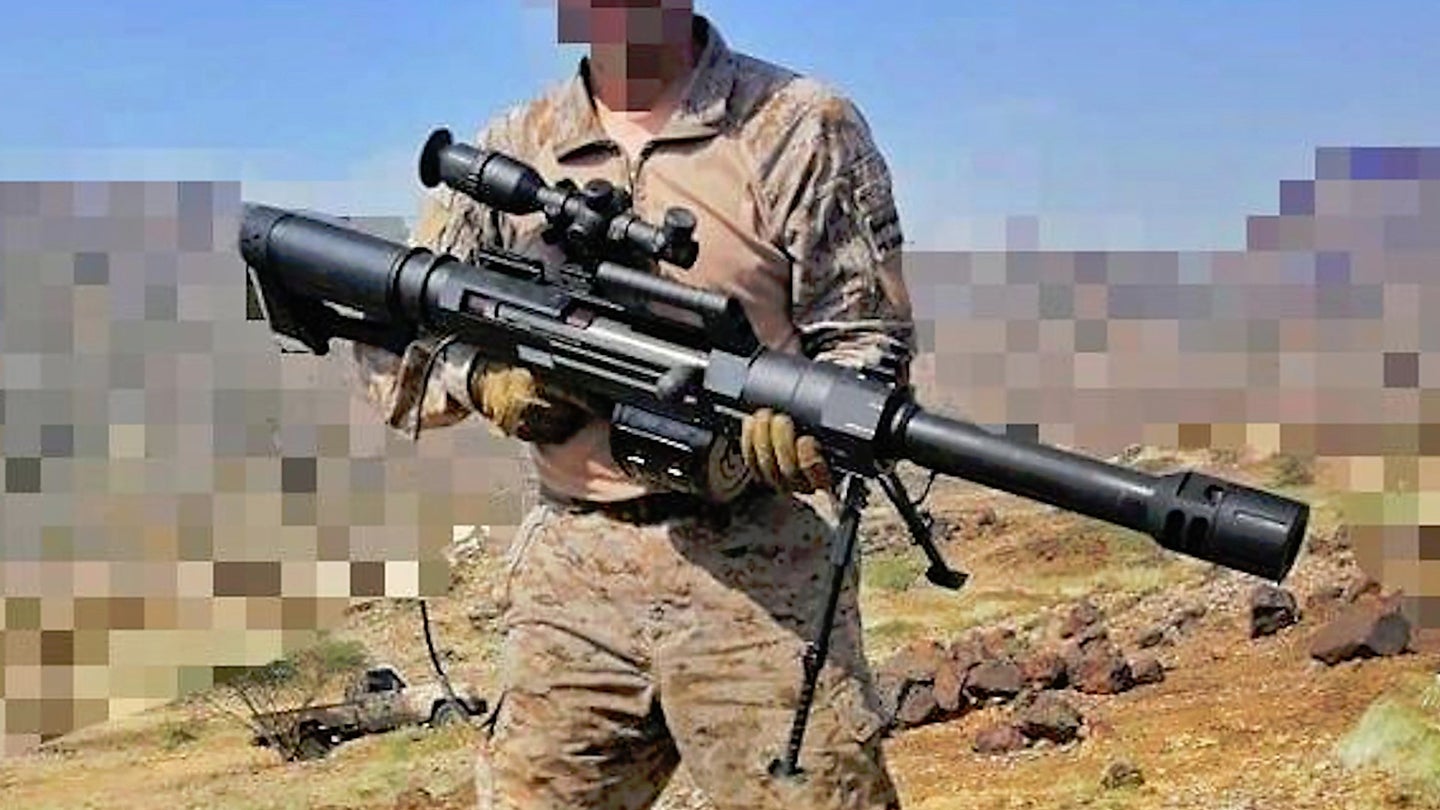 Pictures and a video have emerged online reportedly showing a Saudi Arabian soldier engaged in the conflict against Iranian-backed Houthi rebels in Yemen using a Chinese-made Norinco LG5 man-portable 40mm grenade launcher. This appears to be the first evidence of the weapon, which looks like a prop gun from a Hollywood blockbuster, being in service outside China, as well as its first use in combat anywhere.

Twitter user SulaimanAldoosari, who also goes by SAUDI_POWER0 on Instagram, posted the images of the LG5 in use with Saudi forces in Yemen on social media on Nov. 3, 2019. It is unclear how long the Saudis have been using the weapon, but Defence Blog reported in February 2018, citing unnamed sources, that Chinese state-run arms company Norinco had secured an order for the grenade launchers from an unspecified "Middle East customer."

The LG5 is the export version of the People's Liberation Army's QLU-11, which Norinco first introduced in 2011. The primary difference between the two is that the PLA's version fires the Chinese military's standard 35x32mm grenade, while the model intended for foreign sales uses ubiquitous 40x53mm rounds, an ammunition type that the United States originally developed.

Both launchers feed from drum magazines of various capacities. The 35mm variant has versions that can hold three, five, and seven rounds, while the 40mm version has five and 15-round types.

The QLU-11/LG5 is a curious weapon often described as "sniper" grenade launcher and can be used in a shoulder-fired configuration with a bipod as a very large anti-materiel rifle. In this configuration, the QLU-11 version weighs just around 29 and a half pounds. For comparison, the iconic Barrett .50 caliber sniper rifle weighs around 30 pounds, depending on the exact variant. The Chinese weapon uses a recoiling barrel and recoil-absorbing stock assembly, as seen in the video below, to help reduce the shock of firing and keep weight to a minimum.

There is limited information available in English about the LG5, but it is very possible that the 40mm LG5 weighs more given the added strain on the weapon, and the shooter, when firing the more powerful cartridge. The video of the Saudi soldier using the weapon in Yemen, which shows him exerting a not-insignificant amount of effort to get it into a firing position, makes it clear that it is anything but light regardless of its exact weight.

It's worth noting that the U.S. military does not have any shoulder-fired 40x53mm weapon in service, using that ammunition only in heavier automatic grenade launchers mounted on tripods or vehicles. Previous experiments by the U.S. military and Western defense contractors to develop individual weapons firing the 40x53mm cartridge, or medium-velocity derivatives, have not been successful. Still, there has been clear interest in the United States and elsewhere in larger, multi-shot grenade launchers. The U.S. Marine Corps and American special operators have adopted six-shot revolver-style grenade launchers, but which fire the low-velocity 40x46mm round.

With all this in mind, it's perhaps not surprising that the QLU-11/LG5 can also be used in a tripod-mounted configuration more akin to a traditional automatic grenade launcher. This would seem almost necessary when using the weapon in conjunction with one of the larger ammunition drums.

The Chinese were reportedly inspired to develop the QLU-11/LG5, in part, by the U.S. Army's work on the XM109 "Anti-Materiel Payload Rifle" in the late 1990s and early 2000s. The XM109 was a derivative of the .50 caliber Barrett that used 25mm ammunition that the service had developed for a series of abortive future weapons, including the XM29 Objective Individual Combat Weapon (OICW), XM307 Objective Crew-Served Weapon (OSCW), and the XM25 Individual Semi-Automatic Airburst System (ISAAS) or Counter-Defilade Target Engagement (CDTE) system.

Norinco had also developed the QLZ-87 grenade launcher, which is very similar in general form and function to the QLU-11/LG5, in the late 1980s. This weapon also fired the 35x32mm round and soldiers could use it in shoulder-fired and tripod-mounted configurations. The QLZ-87 has already seen some export success of its, primarily to countries in Africa.

As with the older QLZ-87, in the bipod-equipped configuration, the new QLU-11/LG5 is useful as both an area fire weapon against groups of lightly armored and unarmored targets, as well as potentially a point-fire weapon against individual threats. The LG5 reportedly has a maximum effective range around area target of around 3,280 feet, but can saturate a larger area with less accurate fire up 7,220 feet away, depending on the type of ammunition used.

There is a diverse array of ammunition available, including high-explosive dual-purpose rounds with anti-personnel and light armor-piercing effects, as well an air-burst type to engage enemy forces hiding behind hard cover such as rocks or inside structures. With this in mind, it seems well-suited to Saudi Arabia's fight against Iranian-backed Houthi rebels in Yemen, who primarily use modified civilian vehicles or operate on foot. Significant parts of the country are also mountainous, making the LG5's range and ability to neutralize threats shielded by rocky outcroppings even more valuable.

Though the Saudi version we have seen so far has a simple telescopic optic, China has offered the LG5 with a computerized optic that includes laser range finder. This would help improve the accuracy of the weapon, which could make it even more lethal.

Regardless, the LG5 also offers a weapon that is more readily portable by small units in rugged terrain than heavier automatic grenade launchers, especially those mounted on vehicles that may have more difficulty operating in mountainous environments. At the same time, it also offers increased firepower and range, as well as a greater volume of fire, over single-shot grenade launchers, including stand-alone types or examples that troops can carry attached to standard infantry rifles and carbines.

It will be interesting now to see if reports emerge about how effective the LG5 turns out to be in actual combat. At the same time, it's worth noting that the conflict in Yemen has called into question the general quality and capability of Saudi forces, which The War Zone has previously explored in detail.

If the Saudi experience with this action movie-esque "sniper" grenade launcher is at all positive, it may help China secure further export sales of the LG5 in the future.

A top U.S. Army advisor to the Saudis had previously described high casualty rates and a worrying lack of capacity in the country’s National Guard.