The new round also doubles the range of the weapon, which will still have the flexibility to fire all of the existing unguided ammunition. 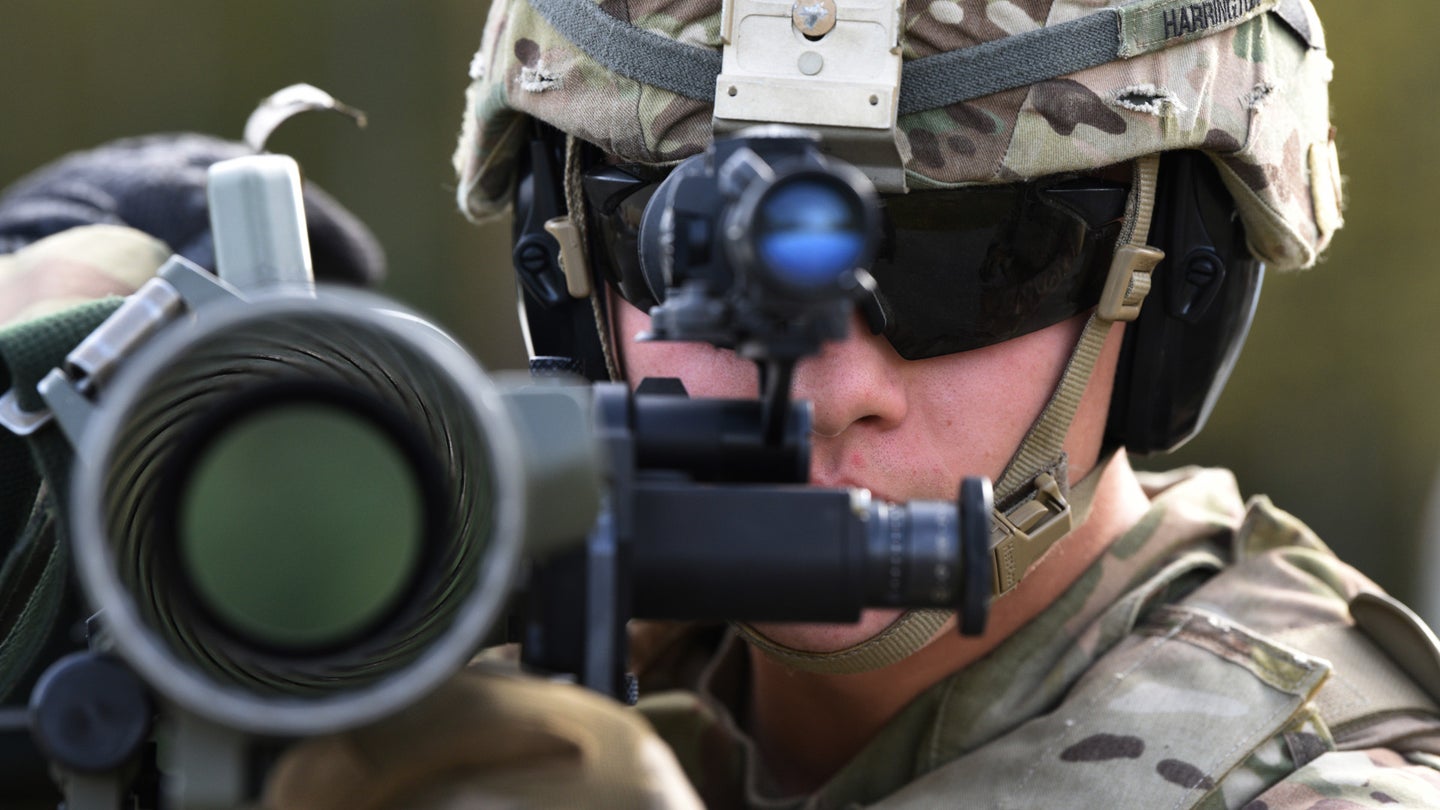 Saab successfully tested a precision-guided round for its M3E1 Carl Gustaf recoilless rifles earlier this year and is set to demonstrate it for U.S. special operators next year. The new projectile will also double the maximum range of the weapon compared to when firing existing unguided ammunition, while still being safe to fire from enclosed spaces, such as from the window of a building.

Military.com was first to get the updates on the new round after talking with Michael Höglund, head of Saab Dynamics' Ground Combat Business Unit this week. The Swedish defense contractor teamed up with American firm Raytheon in 2017 to develop the precision-guided ammunition. Raytheon had displayed a mock-up of the round at the Association of the U.S. Army's main annual convention the following year.

"The Guided Carl-Gustaf Munition is a next step in the evolution of the Carl-Gustaf system," Görgen Johansson, head of Saab Dynamics, said in a subsequent press release. "It will be the most advanced Carl-Gustaf munition yet and will offer greater precision, minimise collateral damage and deliver outstanding performance with pin-point accuracy and multi-target capability."

The current version that Saab and Raytheon have been testing looks largely unchanged externally from the one on display two years ago. It features two sets of pop-out fins to steer itself to the target.

The new round also features a rocket motor giving is significant additional range. The precision-guided projectile hit two stationary targets nearly 4,600 feet away and a moving target at a range of just over 5,900 feet during tests at the Saab Bofors Test Centre in Karlskoga, Sweden, in September 2019, Höglund said, according to Military.com. None of the weapons in these tests had live warheads. A Raytheon press release said that the missile had successfully completed a total of 11 test flights, including some at the Mile High Range in Sierra Blanca, Texas, with no failures.

Right now, the M3E1's maximum range using existing ammunition options is around 3,280 feet. The goal is to eventually be able to demonstrate that the precision-guided round can effectively engage threats out to at least 6,560 feet, if not further, depending on the exact launch parameters.

Even with this added range, Saab says that troops can still fire it from inside buildings or other confined areas without fear of the backblast damaging their position or even injuring them. Recoilless rifles already often have very large danger zones behind them during firing, to begin with, due to their specific method of operation, which you can read about in more detail in The War Zone's past profile on the Carl Gustaf family.

It's not entirely clear how this "confined space" system works in the case of Saab and Raytheon's guided round, but a video that Raytheon released of some of the testing, seen earlier in this story, shows that the round has a two-stage propulsion system with a small booster motor to first get it out of the launcher and to a safe distance before the main motor kicks in.

Many man-portable guided anti-tank missile launchers, such as the U.S. military's FGM-148 Javelin, use a similar propulsion arrangement. Being able to fire from inside a building or other constrained firing positions is extremely valuable, especially for fighting dense urban environments, which the U.S. military, among others see as an increasingly likely possibility in the future.

Back in 2017, Saab and Raytheon had also said that the weapon would use semi-active laser guidance, which requires either the gunner firing the M3E1 or another individual to keep a laser beam pointed at the target until the moment of impact. Ty Blanchard, the program manager at Raytheon for what is formally known as the Guided Carl-Gustaf Munition, told Military.com that this is still the case, but that future seeker upgrades could give it a fire-and-forget capability.

Saab's press release says that it and Raytheon have already demonstrated other "seeker technolgoies" that could be applicable. This included imaging infrared, which the Javelin, a weapon Raytheon developed with Lockheed Martin, uses, according to that statement. There was no specific mention of millimeter-wave radar, but this is another popular option found on various smart munitions.

It's also not clear how much modification the existing M3E1 may or may not need to be able to fire the round. It may be as simple as adding a new sighting system to the launcher, which could then transmit any necessary pre-launch information to the round wirelessly, which is how a number of existing programmable ammunition types work already. Saab also offers the latest version of the Carl Gustaf with a digital sighting system with an integrated laser range finder and ballistic computer.

Right now, Saab and Raytheon are preparing for at least three more tests of the guided round next spring with live warheads. We don't know what the warhead configuration will be, but two years ago Saab and Raytheon said that the projectile would have a tandem warhead, which could be useful against armored targets and hardened structures.

The tandem warhead arrangement could help it defeat certain add-on armor packages on vehicles, including explosive reactive armor, or break through the wall of a building or a bunker before the second warhead detonates within for maximum effect. This kind of capability would fit well with the three upcoming test targets, which are three layers of brick wall, an eight-inch section of reinforced concrete, and an up-armored sport utility vehicle, Blanchard said, according to Military.com.

"Raytheon and Saab have spent the last 12 months working together to develop a precision-guided munition that will penetrate multiple targets, such as light armor, bunkers and concrete structures, at extended ranges," Sam Deneke, Raytheon Land Warfare Systems' Vice President, also said in a statement. "This lightweight round can overmatch potential adversaries while decreasing collateral damage, making it an ideal weapon when fighting under restricted rules of engagement."

The test shots are part of a $2.5 million rapid innovation contract that the two companies received from the U.S. Army, in support of a U.S. Special Operations Command requirement, last year to continue the development of the precision-guided ammunition. The U.S. special operations community were the first within the U.S. military to begin using the Carl Gustaf, which has been popular around the world for decades.

However, regular U.S. Army units, as well as those in the U.S. Marine Corps, are now also increasingly using these weapons, as well. In 2017, the Army notably approved a purchase order of more than 1,000 of the launchers. Both of these services will no doubt be interested in the precision-guided round, as well. As noted, the Carl Gustaf family of launchers is in widespread use around the world, which means there is a well-established potential export market for guided ammunition, too. Saab said that the tests in September had been "in the presence of an international audience."

The cost of the rounds could be an important factor in future sales. Precision guided missiles can be exorbitantly expensive, leading commanders to be reticent to use them, except when absolutely necessary, which was one of the driving factors in the Army's decision to adopt of the Carl Gustaf for widespread use two years ago. A single Javelin missile costs around $80,000. By comparison, the costliest unguided ammunition for the M3E1 is around $3,000 per shot.

Still, even if Saab and Raytheon's guided projectile is just as expensive as something like the Javelin, that may not be as problematic for cost-conscious customers given that the Carl Gustafs can still readily fire the existing suite of unguided ammunition. This includes anti-tank, general-purpose high explosive, and white phosphorus smoke shells, as well as ones containing illuminating flares. There is another one for specifically for engaging threats inside hardened structures and a "close-in protection” round for targeting enemy troops in the open loaded with 1,100 small metal darts, also known as flechettes.

This high degree of flexibility means that even small units could carry a variety of different ammunition and save expensive precision-guided options for situations that specifically require the added range or moving target engagement capability. Those same forces would be able to more readily switch between different types of rounds while still maintaining a greater volume of fire than could be achieved using guided anti-tank missile launchers.

All told, Raytheon and Saab appear to be making good progress on developing this new precision-guided round, which could significantly increase the capabilities of the already beloved Carl Gustaf.

After nearly 40 years of development, the hypersonic anti-tank missile disappeared. Now it’s more relevant than ever before. So where is it?

New rockets with multiple firing modes and the ability to fire them safely from within buildings could keep the weapon in service for years to come.