“That’s no MiG-28!” Show your love for two pop culture phenomena—UFOs and Top Gun—with this out of this world T-Shirt! 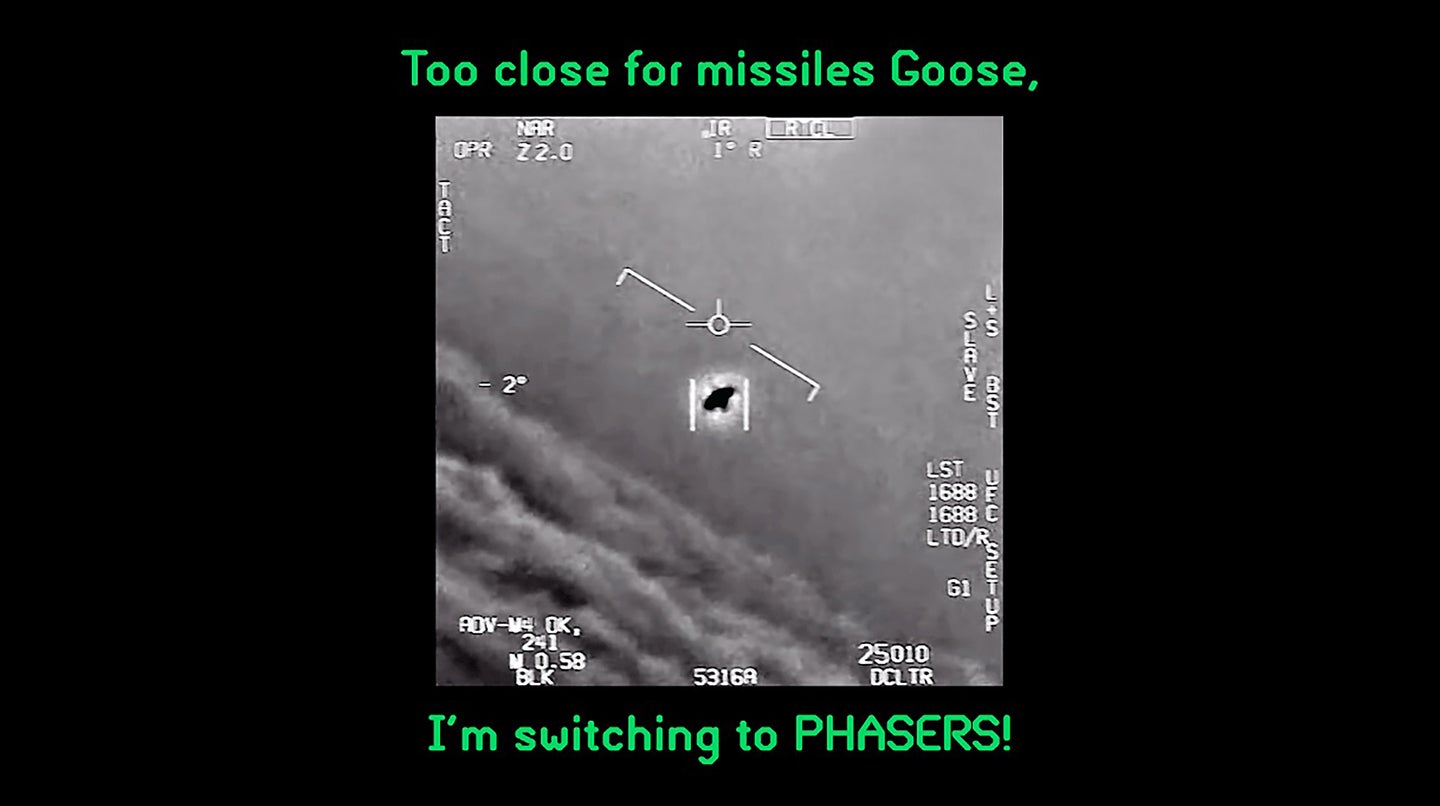 Whether it is a giant flying Tic Tac or a floating cube inside a sphere, U.S. Navy fighter pilots have been encountering some bizarre objects in the skies off America's coasts. It's a topic that The War Zone has dived deeply into in an attempt to separate fact from fiction, wherever possible. Now you can celebrate your own interest in what can only be considered a new era of aerial phenomena and your love for another popular culture staple, Top Gun, with our new exclusive and very limited run "Switching To Phasers" t-shirt!

One of the best action sequences in Top Gun is Maverick and Goose's aerial showdown with the hard as nails adversary pilot, Viper. The set-piece resulted in one of the most quoted lines from the film: "Too close for missiles Goose, I'm switching to guns!"

We pay tribute to this famous piece of dialogue and adapt it to U.S. Navy pilots' new bogies—UFOs. We also add in some out of this world weaponry to deal with this mysterious threat for good measure. Our shirt reads appropriately: "Too close for missiles Goose, I'm switching to phasers!"

Sandwiched in between is a still frame of the now-famous footage that, according to the Pentagon, depicts an unidentified flying object of some sort. The verdict is still very much out on what that object may be and where it came from, but regardless, it is imagery taken straight from an F/A-18 Super Hornet's ATFLIR targeting pod and it's definitely more real than a MiG-28!

With Top Gun II coming in hot next summer, this awesome piece of paranormal apparel will have the endurance of a fully-fueled Tomcat and the striking power of an AIM-54 Phoenix missile.

Race on down to the hard deck and get your "Switching To Phasers!" shirt now before it zips off into the heavens in a blink of an eye never to be seen of again by clicking over to our partners at Blipshift linked here.

The countdown clock is ticking, by the end of Monday, you will be sweating like Cougar because you missed out. And remember, Christmas is just around the corner and it's hard to think of a more unique stocking stuffer! Just make sure to fill in the "from" field on the gift-tag as "unidentified."

Show the world how dangerous you really are by grabbing one of these shirts and a couple more for your wingmen.