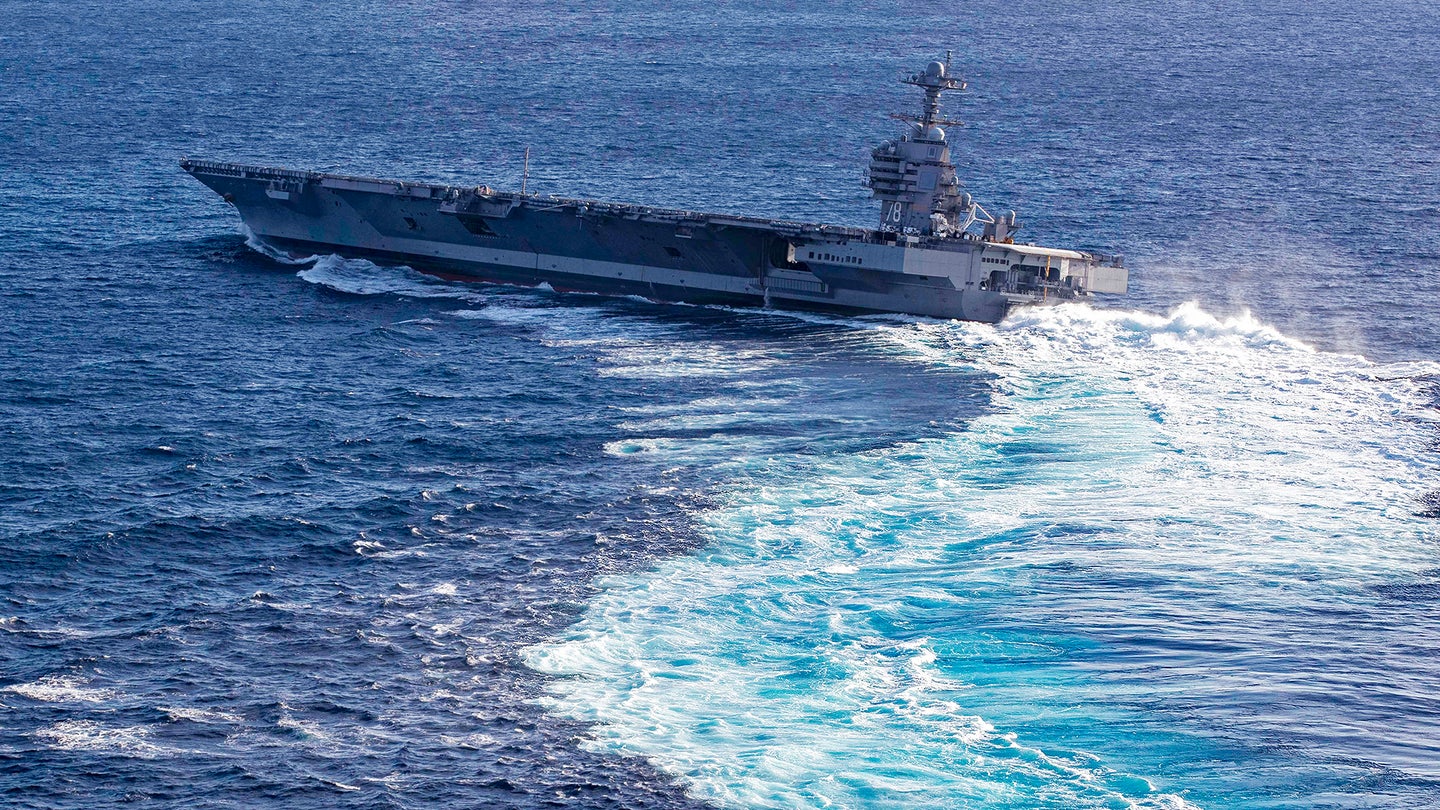 The Ford class supercarrier program has been a massive boondoggle, which I have been reporting on it at great length for years, and the problems it is experiencing were so avoidable one can't help but cringe. Putting those issues aside, or the fact that a single ship costs $13B—it's the most expensive warship ever made, in fact, it's the most expensive weapon ever made—it is pretty damn cool looking. These photos, which show the 1,106-foot long nuclear-powered ship executing some impressive high speed turns and heading out on sea trials following a long servicing period, are the best I have seen of her yet.

Visually speaking, the Ford class varies substantially from the Nimitz class configuration that proceeded in multiple ways. Ford's angular and smaller island superstructure is set farther back by 140 feet, opening up a large amount of deck space in front of it.

The island is set so far back that it is a bit offputting at first as it looks quite close to the landing area. Regardless, it redefines the classic silhouette of the American nuclear-powered supercarrier.

There are six flush-mounted active electronically scanned arrays (AESA) on the island that make up the ship's new Dual Band Radar, which will be short-lived production-wise, with it only planned to be installed on two of the Ford class carriers. It will be replaced with the Enterprise Air Surveillance Radar (EASR) starting on future USS Enterprise (CVN-80). You can read all about this new system in this past piece of ours. Generally speaking, the island has an overall cleaner and more svelte look. Even the mast atop the island is less cluttered than what we are used to seeing due to the Dual Band Radar, among other factors.

Because of these changes, there are now two aircraft elevators on the starboard side of the carrier, both of which are situated in front of the island. Another one is located on the opposite side of the ship on its aft waist area. In comparison, the Nimitz class has four aircraft elevators, an interesting development considering the purpose of Ford's new design is to supposedly increase sortie rates and ease movement around the deck.

Another big change in appearance is caused by the big 'wing' platforms that extend from the rear of Ford's hangar deck. These significantly expand the service spaces in the carrier's hangar bay and also offer large platform areas on each side of the ship that can be used to accommodate new weapons and sensors over the ship's planned 50-year service life. It looks a bit awkward from some angles, but having the space available to support things like directed energy weapons and possibly even a future vertical launch system, among so many other possibilities, is pretty exciting.

Here are some shots of Ford leaving port for its latest round of sea trials:

After examining this set of photos taken on Ford's latest shakedown cruise, two questions come to mind. First off, I don't see any electronic warfare systems fitted. Neither the SLQ-32 SEWIP or SLQ-59/62 are seen in their usual spots. This could be because electronic warfare systems are not needed yet and will be fitted later on. An operational deployment for the ship is still years away (as far off as 2024!). It is possible that the SLQ-32 Block II is actually fitted atop the mast in a large eight-sided enclosure. This would be a far higher mounting position than we have ever seen for a carrier electronic warfare system. You can read all about the Block II variant of the SEWIP here.

The second thing I noticed is that there are no target illuminators dispersed around the ship to guide RIM-166 Evolved Sea Sparrow Missiles (ESSMs). ESSM Block II does not need an illuminator as it can be guided via data-link—you can read all about ESSM Block II in this past article of ours—but as far as I know, it is too heavy for the Mk 29 launchers found on carriers and big-deck amphibious assault ships.

Maybe Ford's launchers are upgraded and/or its dual-band radar can provide target illumination. The latter is more likely the case as the Block I ESSM can be guided by the SPY-1 phased array radars on U.S. Navy destroyers and cruisers, as well as other allied ships that use other phased array radars.

Ford has already come back from its short shakedown cruise. How everything went remains unclear, but with so much focus on the troubled ship, we should find out soon.

What do you see interesting in these shots? Let us know in the comments below.