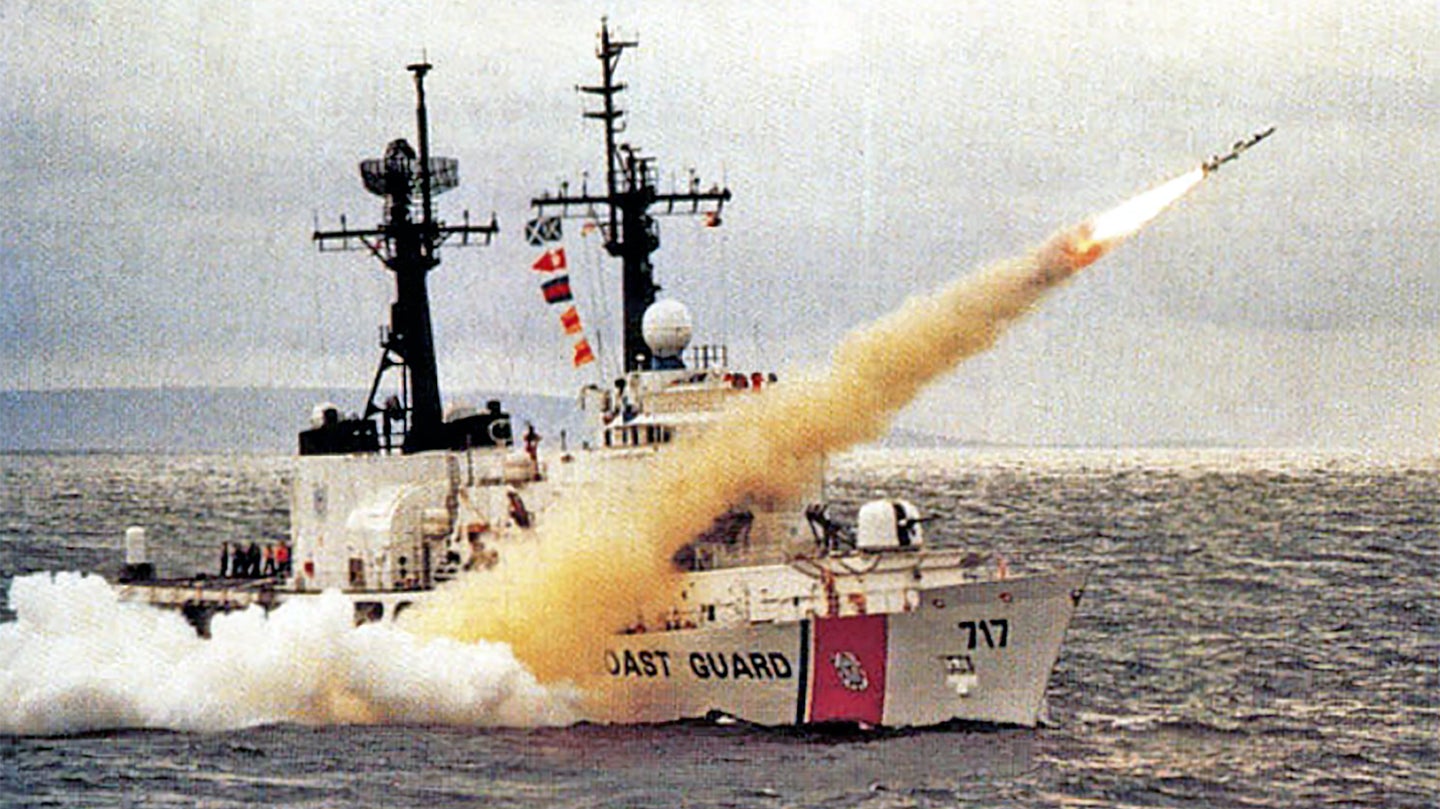 When you mention the U.S. Coast Guard to someone, usually patrolling near America's territorial waters, drug interdiction, and rescuing boaters come to mind, but the reality is that the Coastie's mission ranges far from home and into some pretty nasty neighborhoods. At one time, this reality, combined with a very serious foe, resulted in some of the service's most capable cutters being outfitted with RGM-84 Harpoon anti-ship cruise missiles. Fast forward to today, and we may be on the precipice of another similar sea-change for the service in terms of how heavily armed some of its ships become.

Coast Guard ships are deployed around the globe, from the volatile Persian Gulf to the disputed waters of the South China Sea to the very tense Taiwan Strait, to execute higher-end missions sometimes alongside their more heavily armed U.S. Navy counterparts. As so-called "great power competition" among peer state adversaries heats up, the Coast Guard is getting called on to fill more of these types of missions traditionally executed by Navy surface combatants.

In fact, it has just been announced that the U.S. Coast Guard will be sending three of its newest Fast-Response Cutters to Guam and intends to have a greater presence overall in the region in an attempt to help counter-balance adversaries' growing influence and capabilities—namely China.

Commandant Admiral Karl Schultz, speaking during a visit to the Philippines, part a large tour of the Indo-Pacific region, said that the Coast Guard is "doubling down on Oceana," stating in part the following, according to Stars and Stripes:

“In the face of coercive and antagonistic behavior from China, the U.S. Coast Guard offers transparent engagement and partnership at both the professional and personal levels... My goal for the United States Coast Guard is to be a transparent and preferred partner in the region.

We’re on a trajectory where the geostrategic importance of the Oceania region has not been higher here in decades... And it’s a place that the Coast Guard’s looking to be part of the whole-of-government solution set.

I think the Coast Guard operates below that level of lethality of the Department of Defense on the high-end side of things and above that level of diplomacy at State Department... We’re in that sort of sweet spot in the middle.”

Currently, the Coast Guard's most powerful vessels, the Legend class National Security Cutters (NSCs), are equipped with a 57mm deck gun, a Phalanx close-in weapon system (CIWS), and some smaller machine guns. It is also outfitted with the AN/SLQ-32V2 SEWIP electronic warfare suite. It has two hangar bays for a pair of helicopters or a helicopter and a handful of drones. The stern has a launch and recovery area for large rigid-hull inflatable boats, as well.

In addition to weaponry and vehicles, these ships have a fairly impressive array of sensors that are supported by its advanced COMBATSS-21 combat management system—the same system used on the Littoral Combat Ships and is slated to be used on the Navy's new frigate. Still, these ships lack any over-the-horizon weaponry and are not considered potential targets that can 'bite back' in anything but the lowest-end of skirmishes.

During the Cold War, a similar 'great power competition' reality led to the fielding of RGM-84 Harpoon anti-ship missiles aboard some of the Coast Guard's Hamilton class high-endurance cutters. Beyond their core functions, ships were designed in the early 1960s to be able to hunt and kill submarines if need be. They had sonar, torpedo tubes, decoy launchers, and more for that mission. These anti-submarine capabilities were upgraded in the 1980s along with other enhancements, such as a modernized deck gun, new sensors and combat systems, the addition of a hangar bay, and more under the Fleet Rehabilitation and Modernization program. The Navy, which was trying to expand its capacity anyway possible under the Reagan-era naval buildup, saw the latent combat potential in the upgraded Hamilton class cutters.

It was decided that the ships would get further upgrades, including the Phalanx CIWS, Mk38 25mm chain guns, and the RGM-84 Harpoon anti-ship missiles to drastically enhance their lethality. The Navy thought that the upgraded hardy ships could become "assets" instead of "liabilities" when used in more hostile areas for patrols and could even be called upon to fight during an open conflict against a capable foe.

The transcript below gives some background on this initiative as it was maturing into the early 1990s:

The whole fleet of a dozen Hamilton class cutters did not receive this additional upgrade package, but at least USCGS Hamilton, USCGS Morgenthau, and USCGS Mellon did. Still, the Mk38s and Phalanx would eventually find their way onto all the ships in the class.

This configuration only lasted for a short while. The Harpoons and the class's upgraded anti-submarine warfare capabilities would be eliminated in just a few years time. In the end, the Harpoon's short career with the Coast Guard was largely about the massive cost cuts that came after the fall of the Soviet Union, not the relevance of the concept itself. The missiles were gone from the ships by the mid-1990s.

Fast forward to today and we are back into a similar if not more complicated strategic situation. The Navy desperately needs more surface combatant capacity, but will have a very hard time realizing its lofty goal of achieving a 355 ship fleet in the coming decades. In the meantime, the Coast Guard is stepping up its commitment to help out, as the Admiral discussed above.

On top of this, the entire Navy and Marine corps are pushing towards a new era of distributed warfare—one in which cruise missiles could find themselves on all types of new platforms, including sealift ships. The idea is to leverage new modular standoff weaponry to diversify and drastically increase the number of platforms that can execute attacks on ships and on targets onshore at any given time around the globe. This drastically increases the enemy's defensive and offensive challenges and allows for more efficiency and capacity when it comes to engaging time-sensitive and opportunistic targets.

The truth is that in many ways the Legend class National Security Cutters are more capable than the Navy's own Littoral Combat Ships. The LCSs have many known deficiencies, but they pack similar defensive armament, decoys, sensors, and combat systems as the NSCs. In fact, the NCSs have AN/SLQ-32 SEWIP electronic warfare suites that not only help protect the ship in hostile waters, they can also be used to generate Harpoon or other anti-ship missile targeting information passively by homing in and geolocating enemy RF emissions. The Littoral Combat Ships lack SEWIP entirely, but do have some electronic support measures systems.

The Navy has rushed to get anti-ship missile capability onto the woefully under-armed LCSs in recent years, with the first operational deployment of the very capable Naval Strike Missile aboard one of these ships happening just weeks ago. You can and should read about the Naval Strike Missile—which is capable of striking maritime and land targets—in this past feature of ours. Beyond the Naval Strike Missile, the Harpoon has never been more lethal as it is getting new upgrades that will keep it relevant for years to come.

So, why not bolt NSM or Harpoon launchers onto the National Security Cutters that will be deploying on overseas patrols in hostile areas, just like the what the Navy has done for the LCS?

As it turns out, the Coast Guard has already admitted to the possibility of arming their ships that will operate in or very near contested environments with cruise missiles. This specifically came up during a congressional hearing in 2017 in regard to the Coast Guard's badly needed future icebreakers that will operate in the Arctic. We published a piece on this development and in it, we quoted Coast Guard Commandant Admiral Paul Zukunft as telling the House Homeland Security Committee members the following:

For decades, the core mission of executing anti-surface warfare via cruise missile had been neglected by the Pentagon, but now it is becoming a high priority across the services. From American nuclear fast attack submarines being reequipped with Harpoons after decades without them, as well as the new Tactical Tomahawk that has anti-ship capabilities, and even more exotic classified anti-ship missiles, to the USAF working to master the delivery of a new generation of standoff naval mines, to the Navy fielding the stealthy Long-Range Anti-Ship Missile (LRASM), to the F-35 being slated to receive the Joint Strike Missile, to the Army even looking to get into the ship-killing business, a new era of anti-ship missile capabilities is rapidly emerging. This is due to the ballooning surface warfare capacity of America's biggest military competitor, China. Russia's revamping of its own naval fleet is also a catalyst behind this anti-ship cruise missile renaissance of sorts.

With all this in mind, it's somewhat puzzling that the Coast Guard and its Navy partners haven't already gone 'back to the future' and worked to arm at the NSCs with anti-ship missiles when they deploy for long overseas patrols in hostile areas. Cost-wise, such an endeavor is relatively affordable, especially if the Navy were to help out as these weapon systems are quite modular in nature and can be switched between ships as they cycle in and out of a region. As laid out above, the proof of concept already exists. Regardless, considering we now live in an age of netcentric and increasingly platform-agnostic warfare, the concept is much more relevant now than it was 30 years ago. The added possibility that far less capable vessels could be armed with similar weapons in the future makes doing so with the National Security Cutters too obvious to ignore.

To recap, the idea of arming some of the USCG's most capable ships with anti-ship missiles when they are operating in tense areas far from home is more relevant now than ever because:

So, what do you think? Is it time to 'up-gun' some of the USCG's most capable vessels that consistently operate in dangerous waters far from home? Let us know in the comments below.