USS America (LHA-6) is executing "routine operations" in the eastern Pacific, but her complement of aircraft is anything but. Deployed aboard are no less than 13 F-35Bs, and possibly even more stowed away in her hangar deck. This is the closest we've seen the USMC and the "Gator Navy" come to executing the notional "Lightning Carrier" concept, which would see the amphibious assault ships packed with nearly two dozen F-35Bs in the full-on fixed-wing aircraft carrier role. You can read all about this idea in this past feature of ours. It even eclipses the USS Wasp's (LHD-1) cruise to the South China Sea last Spring when it was spotted with ten F-35Bs aboard.

The controversial America class was designed for expanded aviation capabilities, with the space that would have been taken up by the ship's floodable well deck and other ground-assault related equipment being used for more hangar capacity and aviation support facilities. The first two to ships in the class, America and Tripoli, retain this unique configuration, with the third in the class and those that follow becoming their own subclass as they regain their well deck and have a number of other alterations you can read all about here.

Regardless, USS America is better suited for expanded F-35 operations than any other amphibious assault ship in the fleet and she had to go through a refit just after being delivered for additional modification to be better suited for taking on the F-35's unique capabilities and especially its hot and powerful exhaust plume when in vertical landing (STOVL) mode. This included treating and reinforcing landing areas on the ship and relocating and hardening components on the vessel that may be directly impacted during F-35B boarding operations.

Still, even with these modifications, it looks as if America may have fallen victim to the F-35's exhaust plume. Take a look at the large satcom dome near the port-aft part of the ship. It looks like it has been badly damaged. This is very near where the F-35Bs lineup beside the ship and cross over onto its deck before landing vertically after their missions.

Plussing up the fixed-wing tactical aircraft component dramatically for some Amphibious Ready Group cruises will definitely give the Navy's big-deck amphibs a boost in air combat capability, including the ability to field more constant aerial patrols, if necessary, but it comes at a cost. Traditionally, these ships deploy with six to eight AV-8Bs or F-35Bs, having the fixed-wing portion of the fixed-wing component of the air wing provide a potent, but limited capability to support amphibious assaults and other traditional Marine tasks.

When more of these jets are added, less USMC amphibious fighting capability can be deployed. But that doesn't mean doing so doesn't make a lot of sense for some missions, in effect turning these ships into light to medium aircraft carriers capable of "first day of war" operations. This is something I have long held up as the biggest advantages of the F-35B and the F-35 program overall—giving America double the carriers capable of kicking-down the enemy's door as combat operations open up.

If you add in a few of Ospreys for aerial refueling, a couple of MH-60s for utility and search and rescue tasks, and an advanced drone for persistent aerial surveillance tasks, you have an impressive fixed-wing carrier force capable of executing relatively high-tempo operations and many of the missions that their larger counterparts are capable of.

It's not like the Harrier hasn't also turned amphibious assault ships into full-on carriers during wartime operations, as well. But those aircraft are smaller and far less capable than the F-35B, and those types of operations have been very limited in nature.

It will be interesting to see if USS America goes on cruise with a similar complement. With just two of the Navy's big deck amphibious assault ships uniquely suited for greatly expanded F-35 operations, if there are to be Lightning Carriers at all, it will most likely be them implementing this hard-hitting configuration. 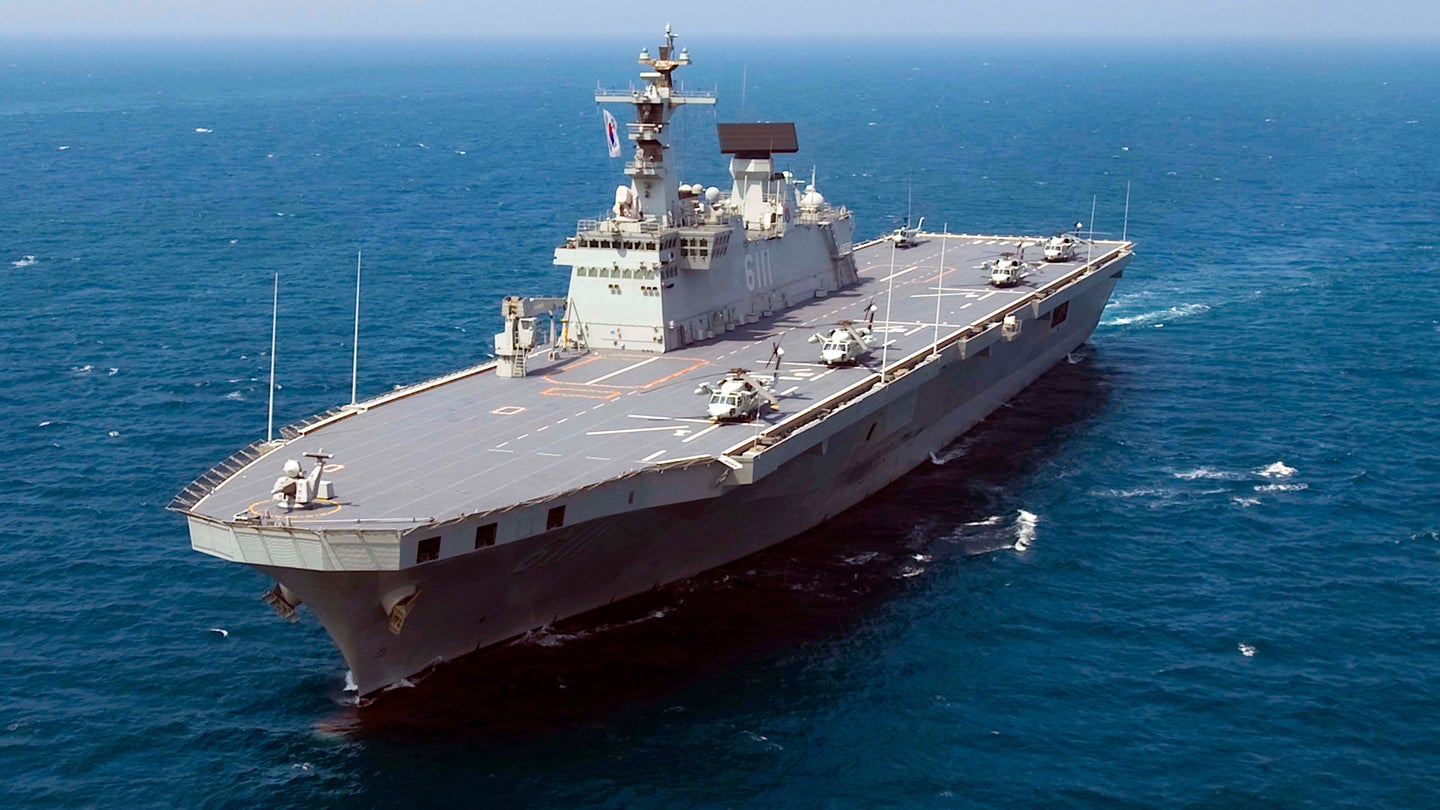 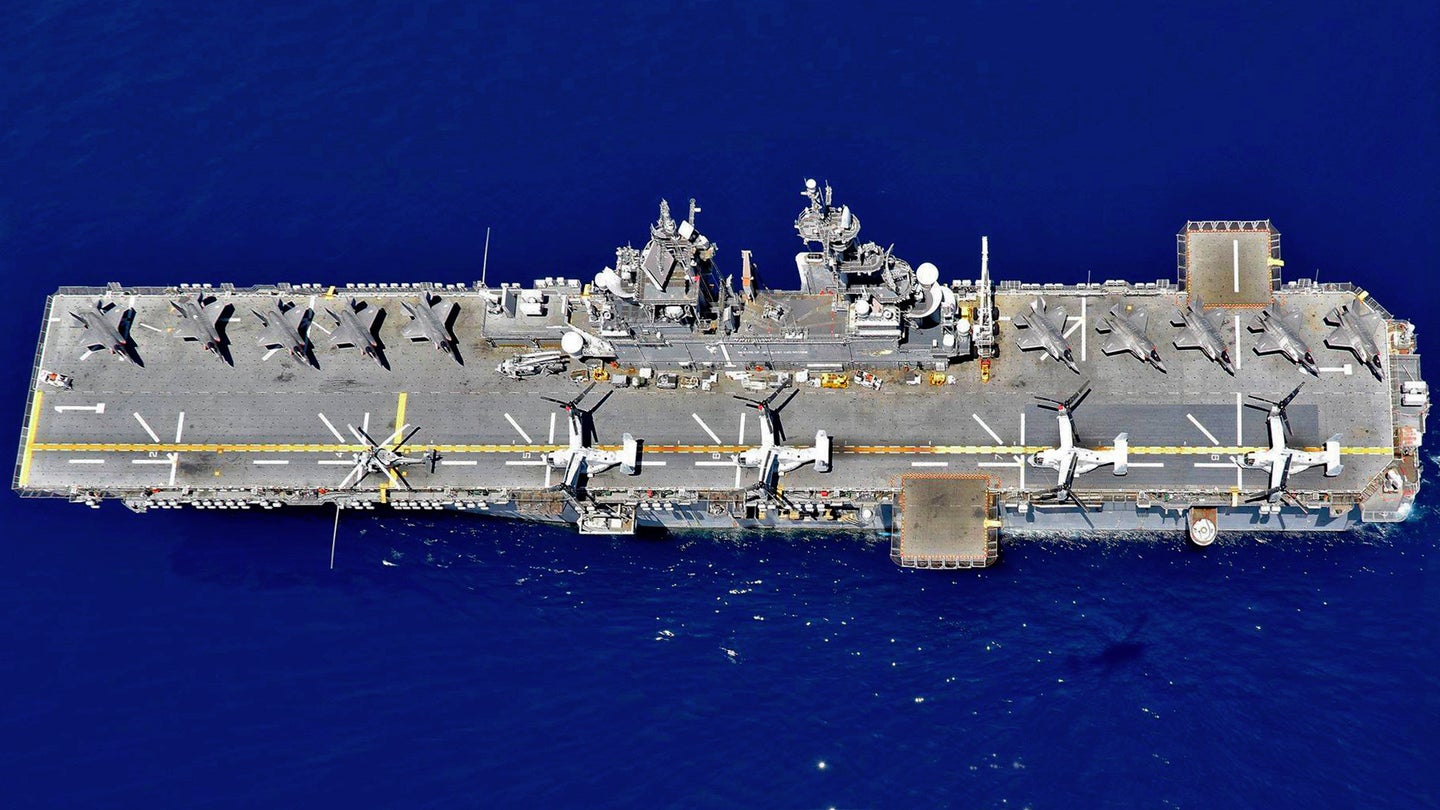 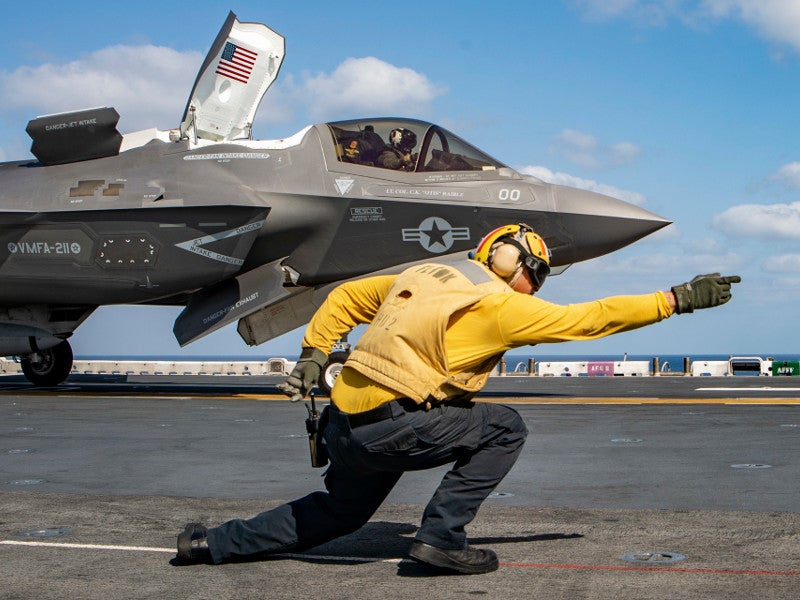