The War Zone has been reporting on a set of bizarre patents assigned to the U.S. Navy that describe radical new technologies that could absolutely revolutionize the aerospace field, and frankly, the very way we live our lives. These include high-energy electromagnetic fields used to create force fields and outlandish new methods of aerospace propulsion and vehicle design that basically read as UFO-like technology. You can learn all about these patents, their viability, and the issues surrounding them in these exclusive features of ours. Now, the same mysterious Naval Air Warfare Center Aircraft Division engineer behind those patents has produced another patent—one for a compact fusion reactor that could pump out absolutely incredible amounts of power in a small space—maybe even in a craft.

Energy dominance has become a cornerstone of American military policy as laboratories seek to develop the ‘Holy Grail’ of power generation: nuclear fusion. These attempts at developing stable fusion reactors utilize incredibly powerful magnetic fields in order to contain the nuclear reactions occurring inside. Creating a stable fusion reaction is difficult enough, but some laboratories are going even further by attempting to create compact reactors small enough to fit inside shipping containers or even possibly vehicles.

The form of nuclear power generation employed in nuclear reactors today is fission, in which unstable isotopes of uranium and other radioactive materials are bombarded with particles, splitting them apart and releasing energy. Fusion, on the other hand, involves uniting atoms of hydrogen isotopes like Tritium and Deuterium under extreme pressure and temperature to produce helium isotopes and neutrons, a process that releases large amounts of energy.

If it can be achieved, nuclear fusion would be a massive improvement over fission in that it produces much lower levels of radioactive waste and greenhouse gases, does not require enriched nuclear material that could be used to produce weapons, has a far lower risk of meltdown, and can be powered by more sustainable fuel sources. Fusion has long been hailed as a long-term solution to humankind's energy needs.

While nuclear physicists and engineers have been conducting experiments with fusion reactor designs for decades, it remains challenging, to say the least, to engineer systems that can contain temperatures of hundreds of millions of degrees Fahrenheit and extremely high pressures. Most of the world’s 'successful' fusion reactors are currently only able to maintain plasma discharges for periods of time measured in minutes or even seconds.

Even more challenging is designing nuclear fusion reactors that are mobile, such as ones that might fit inside a shipping container or a ship. Currently, most of the world’s experimental fusion reactors are the size of large buildings and the ultimate goal of much current research is to develop compact fusion reactor systems, or CFRs, small enough to work on a ship or possibly even an aircraft.

In spite of these hurdles, think tanks, such as the American Security Project, believe that fusion reactors in the 21st Century will provide low cost, carbon-free energy to the world, and predict that the United States can lead the world in finally realizing safe and stable nuclear fusion reactors.

The War Zone has been reporting on Lockheed Martin’s Skunk Works work to create a game-changing compact fusion reactor. The elite aerospace design unit has been constructing a new, more powerful experimental reactor as recently as July 2019.

Aside from Lockheed Martin, several private firms have been developing their own compact fusion reactors in recent years, and the government-run Chinese Academy of Sciences has claimed to have made significant progress in developing fusion reactors that could one day be capable of producing revolutionary levels of energy.

While Lockheed Martin’s CFR designs have garnered quite a bit of media attention and internet buzz in recent years, it appears one of the Skunk Works' major clients is also hard at work in this field. The U.S. Navy has filed a potentially revolutionary patent application for a radical new compact fusion reactor that claims to improve upon the shortcomings of the Skunk Works CFR, and judging from the identity of the reactor’s inventor, it's sure to raise eyebrows in the scientific community.

This latest design is the brainchild of the elusive Salvatore Cezar Pais, the inventor of the Navy’s bizarre and controversial room temperature superconductors, high energy electromagnetic field generators, and sci-fi-sounding propulsion technologies that The War Zone has previously reported on. The patent for Pais’ “Plasma Compression Fusion Device” was applied for on March 22, 2018, and was just published on September 26, 2019. The claim states, in part:

"At present there are few envisioned fusion reactors/devices that come in a small, compact package (ranging from 0.3 to 2 meters in diameter) and typically they use different versions of plasma magnetic confinement. Three such devices are the Lockheed Martin (LM) Skunk Works Compact Fusion Reactor (LM-CFR) , the EMC2 Polywell fusion concept, and the Princeton Field-Reversed Configuration (PFRC) machine. [...] These devices feature short plasma confinement times, possible plasma instabilities with the scaling of size, and it is questionable whether they have the ability of achieving the break - even fusion condition, let alone a self-sustained plasma burn leading to ignition."

It is claimed in the patent application that this plasma compression fusion device is capable of producing power in the gigawatt (1 billion watts) to terawatt (1 trillion watts) range and above with input power only in the kilowatt (1,000 watts) to megawatt (1,000,000 watts) range. By comparison, America's largest nuclear power plant, the Palo Verde nuclear power plant in Arizona, generates around 4,000 megawatts (4 gigawatts), and the A1B nuclear reactors designed for the Navy's Gerald R. Ford-class aircraft carriers generate around 700 megawatts. The patent even claims that the device can "possibly lead to ignition plasma burn, that is self-sustained plasma burn without need for external input power."

The Navy's new plasma compression fusion device, however, claims as its key feature the same principle as in Salvatore Pais' other inventions: the “controlled motion of electrically charged matter via accelerated vibration and/or accelerated spin subjected to smooth yet rapid acceleration transients, in order to generate extremely high energy/high intensity electromagnetic fields.” Pais cites some of his prior publications as evidence that this type of spinning, vibrating electromagnetic system can create the high magnetic fields required to contain powerful fusion reaction in a stable form.

The patent describes how those magnetic fields are generated within a hollow plasma chamber which includes one or more opposing pairs of conical or domed “counter-spinning dynamic fusors” that feature an electrically charged outer surface containing ducts that inject fuel gases, such as Deuterium or Deuterium-Xenon, into the plasma chamber. As these electrically-charged fusors spin, Pais claims, they “create a concentrated magnetic energy flux and electromagnetic radiation within the vacuum chamber,” compressing and heating the gasses within. These fusors vibrate at a high rate as they spin thanks to piezoelectric films such as lead zirconate titanate (PZT) - the same piezoelectric metamaterial Pais claims enables his room-temperature superconductor patent.

Like the other bizarre Salvatore Pais patents we've covered previously, the extent to which this patent represents an operable, functioning, or even feasible technology isn't clear. The Navy has vouched for some of his designs in the past, however, going so far as to claim these inventions actually exist in an operable form and that they are needed for national security purposes, most notably to keep pace with adversaries like China. But unlike some of Pais’ patents, this application sailed through the United States Patent and Trademark Office without rejection and subsequent appeal.

Salvatore Pais is clearly a busy man finding novel applications for high energy electromagnetic fields, and the Navy is patenting some truly science-fiction-like next-generation technologies that if realized, have the potential to change the course of technological development as we know it. Yes, some will likely wonder if this could be the power source that goes along with his other recent "UFO patents"—the engine needed to complete a seemingly otherworldly craft of some sort. The procession of these patents and their potential relation to one another is certainly intriguing, to say the least.

To be frank, we at The War Zone have no idea what is going on here. We have tried to get the Navy to give us some perspective on why these patents were filed, whether they are based on legitimate technology, and why they were ever made public. The Navy remains unwilling to discuss them. At the same time, nearly every physicist we have talked to thinks all of these patents are beyond the realm of known physics and are almost laughable in terms of viability. At the same time, all this is occurring as the Navy, and the Navy alone out of all of the branches of the U.S. military, continues to discuss the fact that its pilots are encountering unexplained aerial phenomena at an alarming rate.

With all this in mind, is the Navy building some sort of incredible craft based on science that remains foreign to the larger scientific community? Did they already do this years ago and are just slowly lifting the veil now? Are they clumsily trying to emulate what their pilots are seeing in the field, but can not yet fully explain? Could these patents just represent gross mismanagement of resources on the Navy's behalf? Or is this all some sort of elaborate disinformation play by the Navy—one that seems to have emerged right in step the rise of major peer-state competition from the likes of Russia and China, and the biggest expansion of advanced aerospace development programs in decades?

At this time we have no way to give you a definitive answer, but we will continue to investigate in hopes of one day being able to do just that.

We've reached out to physicists for comment on this patent and will update this story once we receive their opinions. 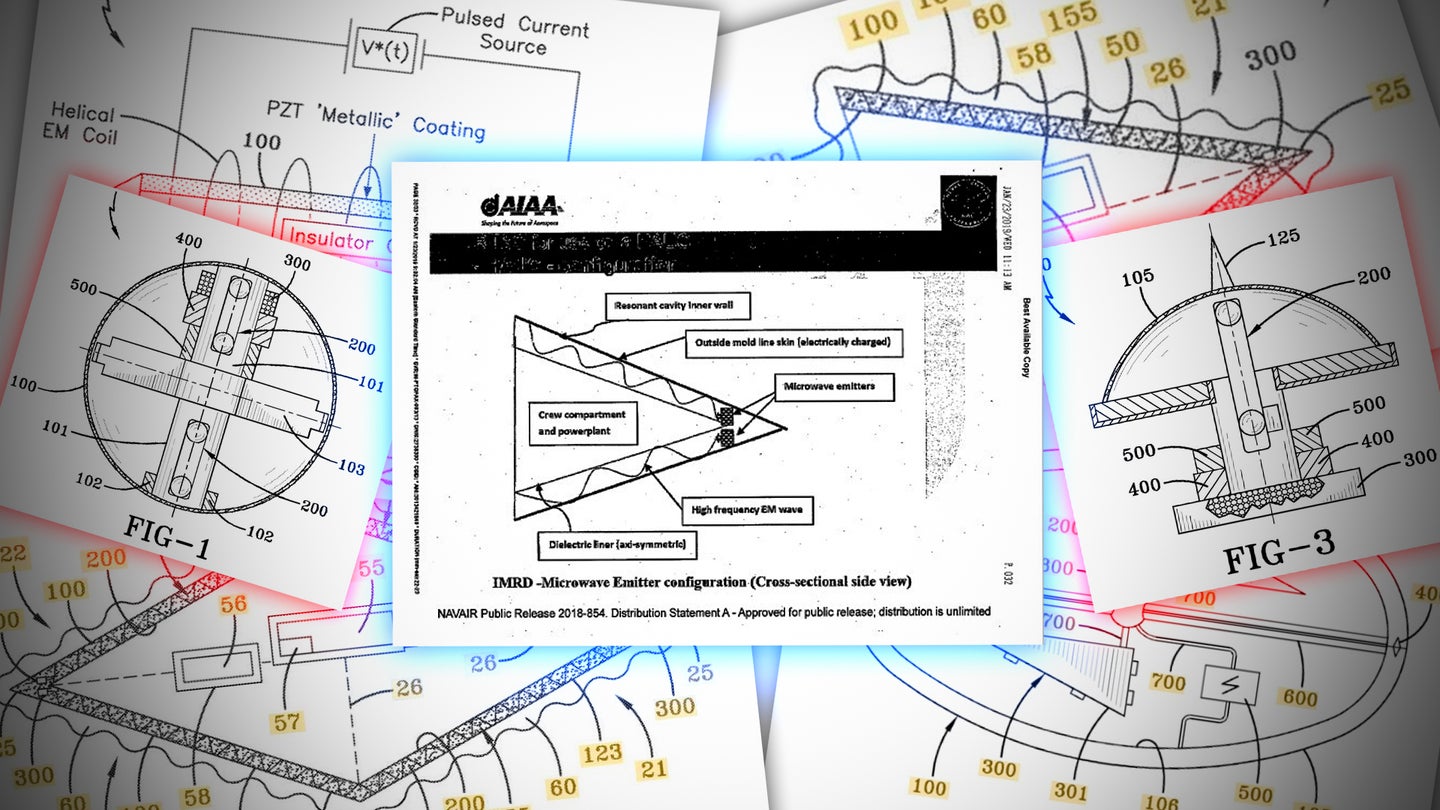 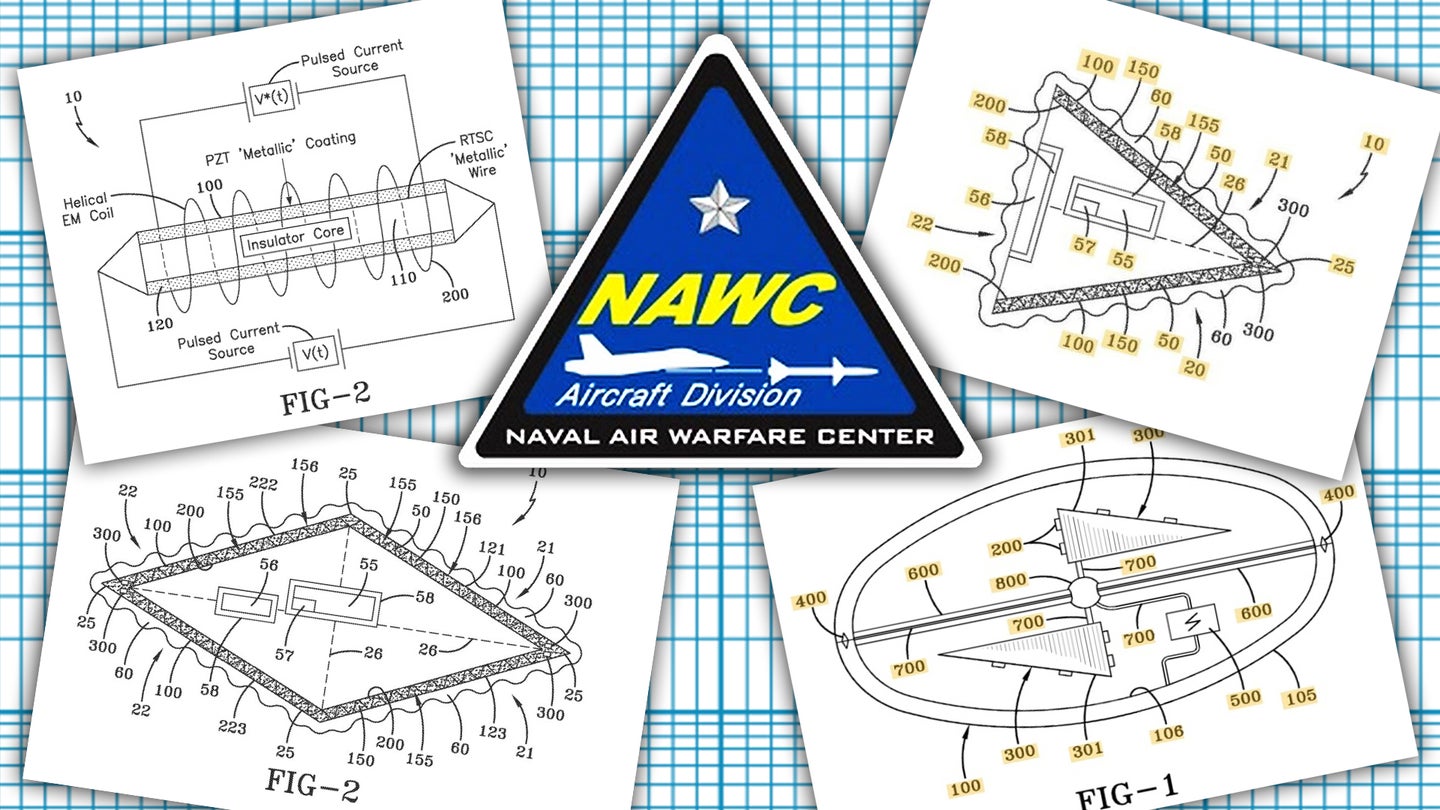 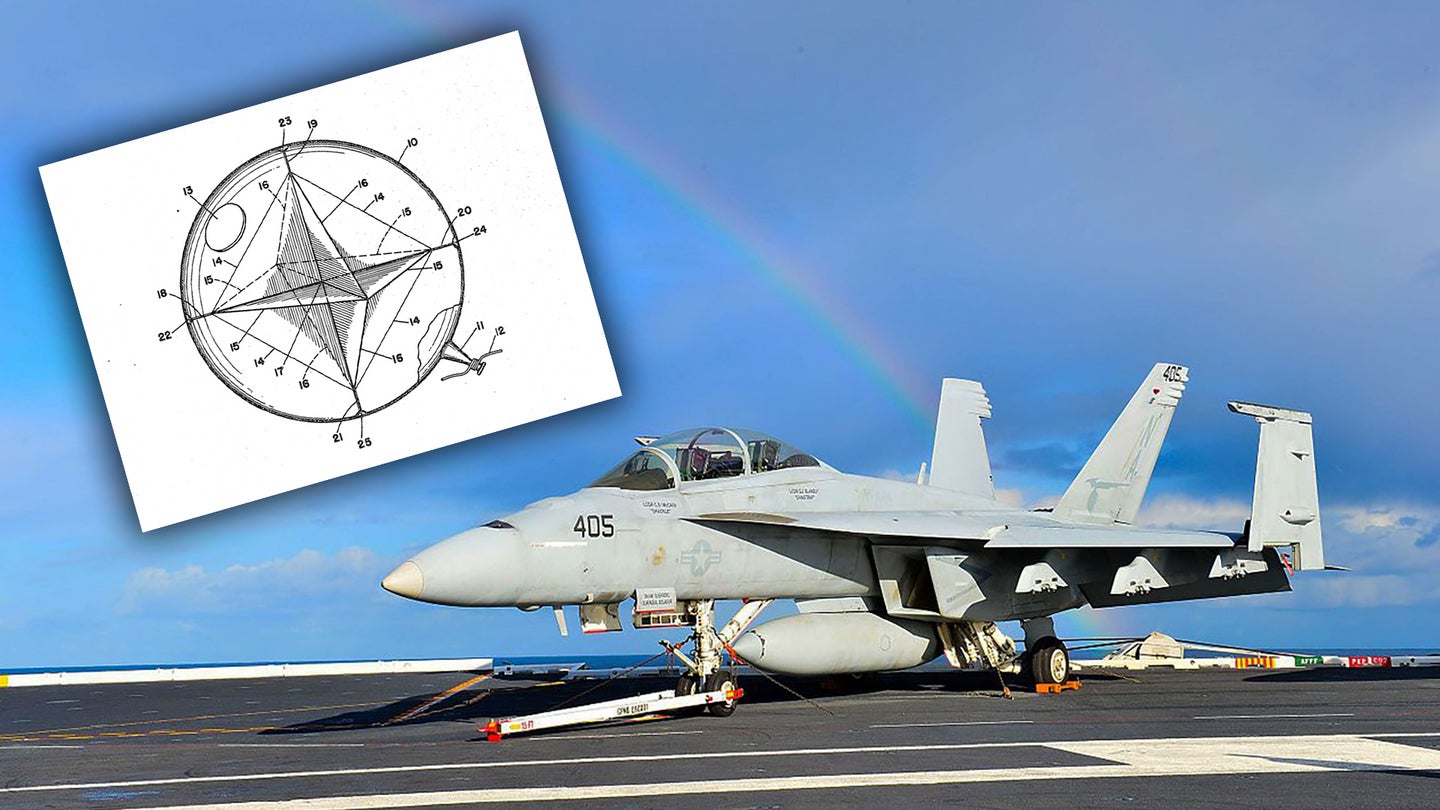 Are Some Of The UFOs Navy Pilots Are Encountering Actually Airborne Radar Reflectors? 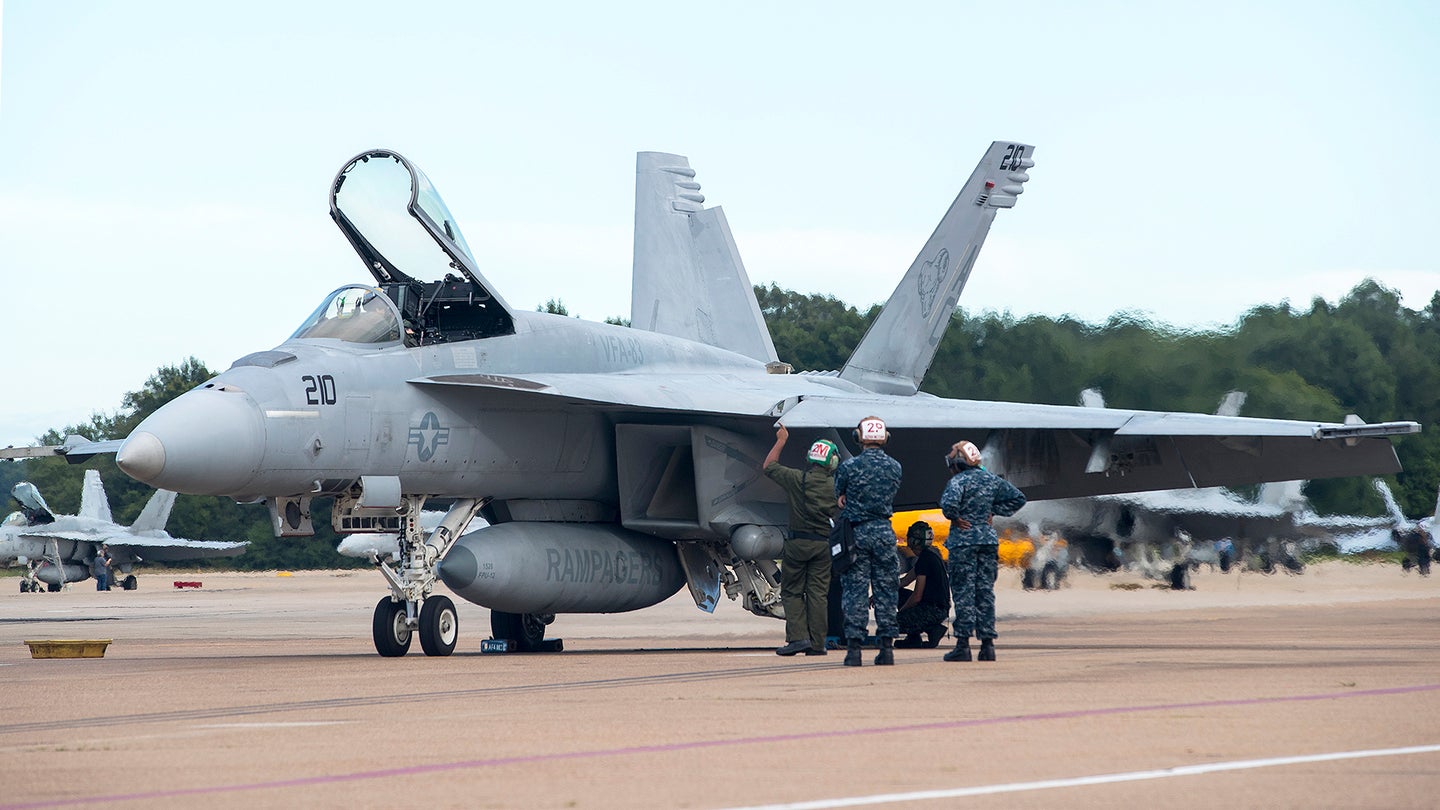 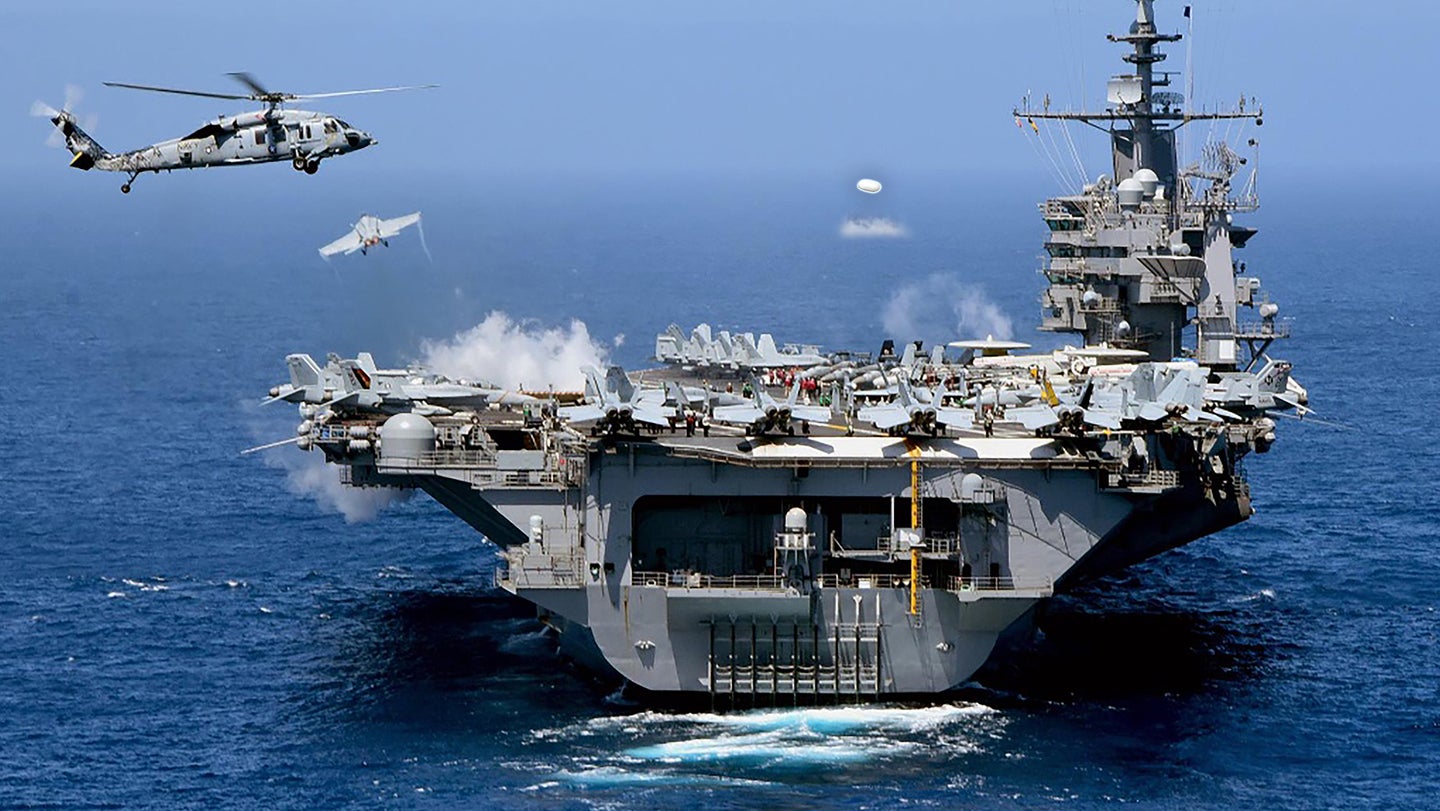