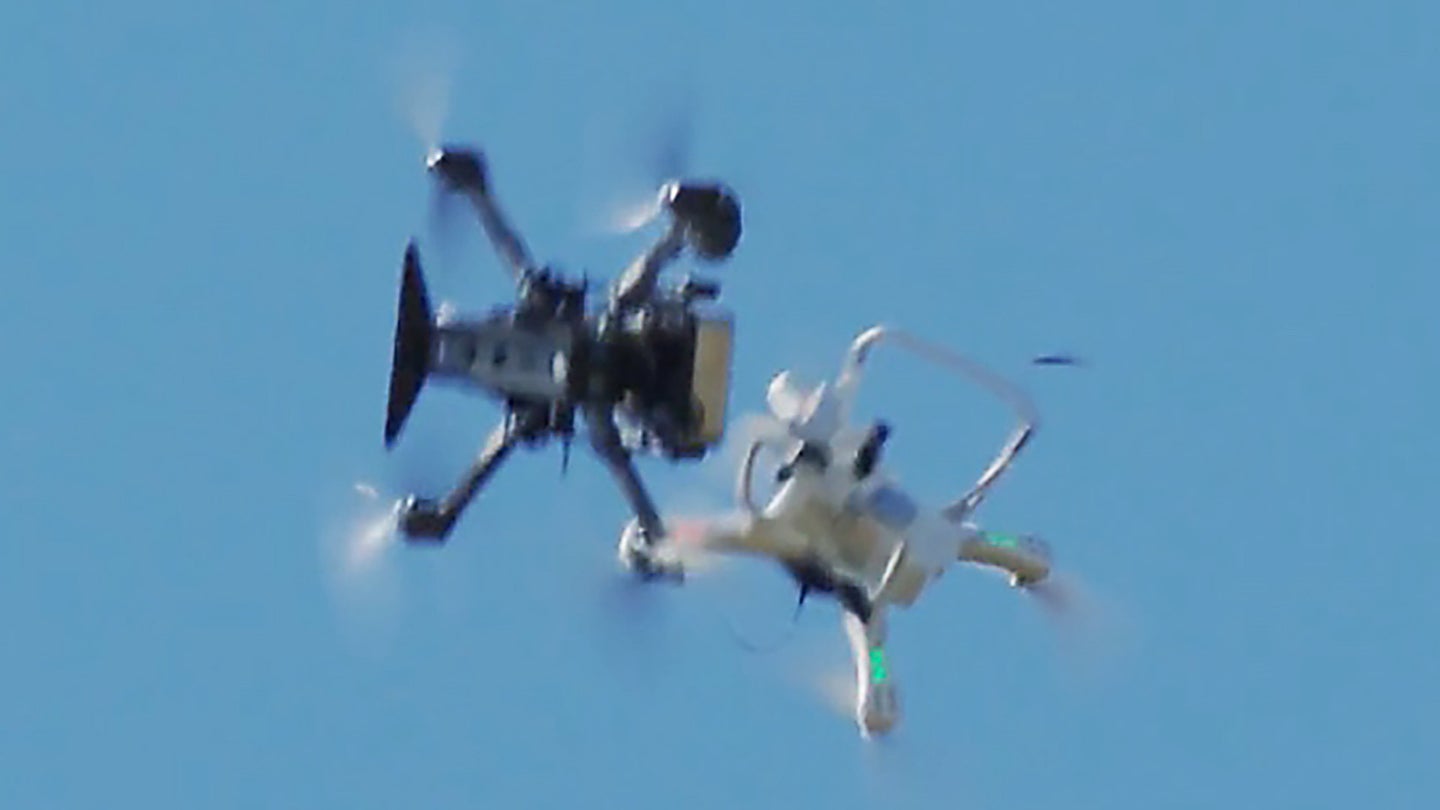 A small California-based tech startup has reportedly begun supplying small "hard kill" attack drones to the U.S. military that are designed to bring down similarly sized hostile unmanned aircraft by physically smashing into them. The market, within the United States and around the world, for counter-drone systems, ranging from electronic warfare jammers to directed energy weapons to suicide drones, has exploded in recent years as the threats that even relatively cheap and diminutive unmanned aircraft pose has become glaringly apparent.

Anduril Industries unveiled what it is presently referring to simply as the "Interceptor" on Oct. 3, 2019. The company says it started delivering its system to the U.S. and U.K. militaries earlier in the year and now has a contract to support activities at an unspecified location overseas, likely as part of a field test, according to reports from Bloomberg and NBC News. Anduril has not specified what American or British military branches specifically it has been working with as part of the project or whether there are any additional foreign customers.

"All the soft kill systems are a waste of time," Palmer Luckey, on of Anduril's co-founders, told Bloomberg in an interview. Luckey was referring to other counter-drone systems that seek to disable their targets by using electronic warfare, typically by jamming the unmanned aircraft's links to a ground control station. The hope is that this would cause it to fall out of the sky or initiate a pre-programmed emergency function that tells it to return to the point of launch. U.S. Marines used just such a system earlier this year to knock down two Iranian drones in the Strait of Hormuz. This might have limited, if any impact on a drone, or a networked swarm of them, operating in a semi-autonomous or fully autonomous mode that does not require a constant connection with a human operator.

Anduril's quad-copter Interceptor uses its own onboard electro-optical and infrared sensors to spot, track, and, as the name implies, intercept the target. An operator on the ground can watch the feed through a hand-held controller and then gives the final order to attack the threat.

A full video of the Interceptor in action is available here.

The sensor technology, and the computer algorithm behind it, are based on ground-based and small drone surveillance systems that Anduril has already developed since the company's founding in 2017. Some of these earlier systems are already in service with U.S. Customs and Border Protection along America's southwestern border with Mexico and the U.S. Marine Corps also began buying some of the firm's existing products earlier this year, after having tested them in the past.

After getting approval to attack, the Interceptor, which is "roughly the weight of a bowling ball," typically between 10 and 16 pounds, according to NBC, smashes into the target at approximately 100 miles per hour. This is enough force to destroy the target and bring it down.

"It almost always survives and returns to base," Luckey wrote on Twitter in response to a question about whether the Interceptor was a single-use system. "But for planning purposes, it makes sense to assume one interceptor per target."

It's not clear what particular concept of operation Anduril, or its customers, may envision for the Interceptors. Luckey says the company is already working on larger and faster versions that could potentially work against "an ultralight aircraft, or a helicopter, or a cruise missile," according to Bloomberg.

The existing design is certainly lightweight and compact enough for small units to carry them on patrols where they might encounter singular enemy unmanned aircraft and want to try to quickly neutralize them. The U.S. military has already publicly said that its bases and forward outposts in Afghanistan are under routine surveillance from insurgent-operated small drones. Non-state actors in recent years have employed small numbers of quad- and hex-copter style drones to drop improvised munitions in various hotspots around the world, including a notable attempt to assassinate Venezuelan dictator Nicolas Maduro in 2018.

State actors, such as China and Iran, are making even more impressive strides in developing these capabilities. Iranian drones were notably part of a recent pair of unprecedented attacks on oil-related sites in Saudi Arabia. Countries developing these unmanned aircraft may also then potentially proliferate these systems, or associated technologies, to their partners around the world. We have already seen this occur with the rapid expansion of the drone arsenal belonging to Iranian-backed Houthi rebels in Yemen.

"In the same way that the Soviets gave away boxes of AK-47s to other countries to get in bed with them, China is giving countries in Africa and Asia access to artificial intelligence technology that allows them to build totalitarian police states," Luckey told NBC. "And they do this because it makes these countries completely dependent on China."

The Interceptor could also be valuable for law enforcement groups who are also increasingly struggling to contend with the proliferation of small drones and the hazards they pose. In December 2018, reports of small drones flying near Gatwick Airport in the United Kingdom led to mass flight cancellations and thousands of stranded airline customers during the peak holiday travel season. There have since been questions about whether any drones were actually present, to begin with, something that Anduril's drone attacker could have been able to more rapidly discern after tracking down the purported object.

A more robust system would be necessary if the Interceptors are to form a shield against mass drone attacks or fully-networked drone swarms operating as a single group, though. The size and autonomous operation of Anduril's design would seem to lend itself to a configuration involving a vehicle- or trailer-mounted launcher that could rapidly launch dozens of these attack drones. Networking the Interceptors into a larger air defense system with radars and other sensors, which would provide early warning and cueing, could be necessary to truly be able to respond to swarm attacks.

In 2018, the U.S. Army announced it was buying exactly this kind of system, now called Howler, based on a variant of Raytheon's expendable Coyote drone with a small explosive warhead. This truck-mounted arrangement also includes a radar to cue the Coyotes toward their intended targets.

In general, using drones to intercept other unmanned aircraft is a concept that makes good sense and it's one that The War Zone has highlighted on multiple occasions. As our own Tyler Rogoway wrote in 2017:

"Being networked together, and being autonomous in nature after being loaded with a target area location, along with other mission parameters, these swarms will be extremely hard to defend against using even the best SHORAD [short-range air defense] systems in development today. It's the saturation nature of the attack, the size of the attackers, and the fact that they work as a coordinated swarm, employing dynamic tactics to see as many in their company survive long enough to make their suicidal attack, that make them so deadly. They could even drop micro-munitions and be reused for a later attack. Just the knowledge that such an attack is possible would be psychologically stressful and demoralizing for troops on the ground.

It's not clear how close the U.S. military, or any of Auduril's other clients, may be to actually adopting and fielding the Interceptor system on a broad scale. The company is relatively secretive and it can be difficult just to determine the basic scope of its work for the U.S. government and others.

This may be due, at least in part, to the controversial nature of Luckey, who first entered the public eye as the founder of the virtual reality company Oculus VR, which Facebook later acquired. In 2016, he left Oculus under still-murky circumstances that may have had to do with his connections to a pro-Trump political group and support for the then-presidential candidate, though Facebook has repeatedly denied this was the case. The bulk of Anduril's other founding members also came from Palantir, a private intelligence firm with its own strong ties to the U.S. government that has been a magnet for controversy in its own right from civil liberties groups.

At the time of writing, the official Federal Procurement Data System database lists just two contracts for Anduril, one with the U.S. Navy and another with the Pentagon's Washington Headquarters Service, neither of which appear to have to do with counter-drone systems. This is despite the fact that it is well established that the firm is doing more work than that for the U.S. government, raising the question about whether deals with the company have been piggybacked onto other existing contracts or awarded through non-traditional mechanisms, such as the U.S. Military's Other Transaction Authority.

Whatever the case, the threat that Anduril has designed its system to respond to is very real and is only likely to grow as time goes on. The appearance of the Interceptor shows that more firms, large and small, are increasingly coming around to the idea of countering these hostile drones with their own suicide unmanned attackers.