The exercise demonstrated the ability to quickly shift command and control tasks to a base in the United States, if necessary. 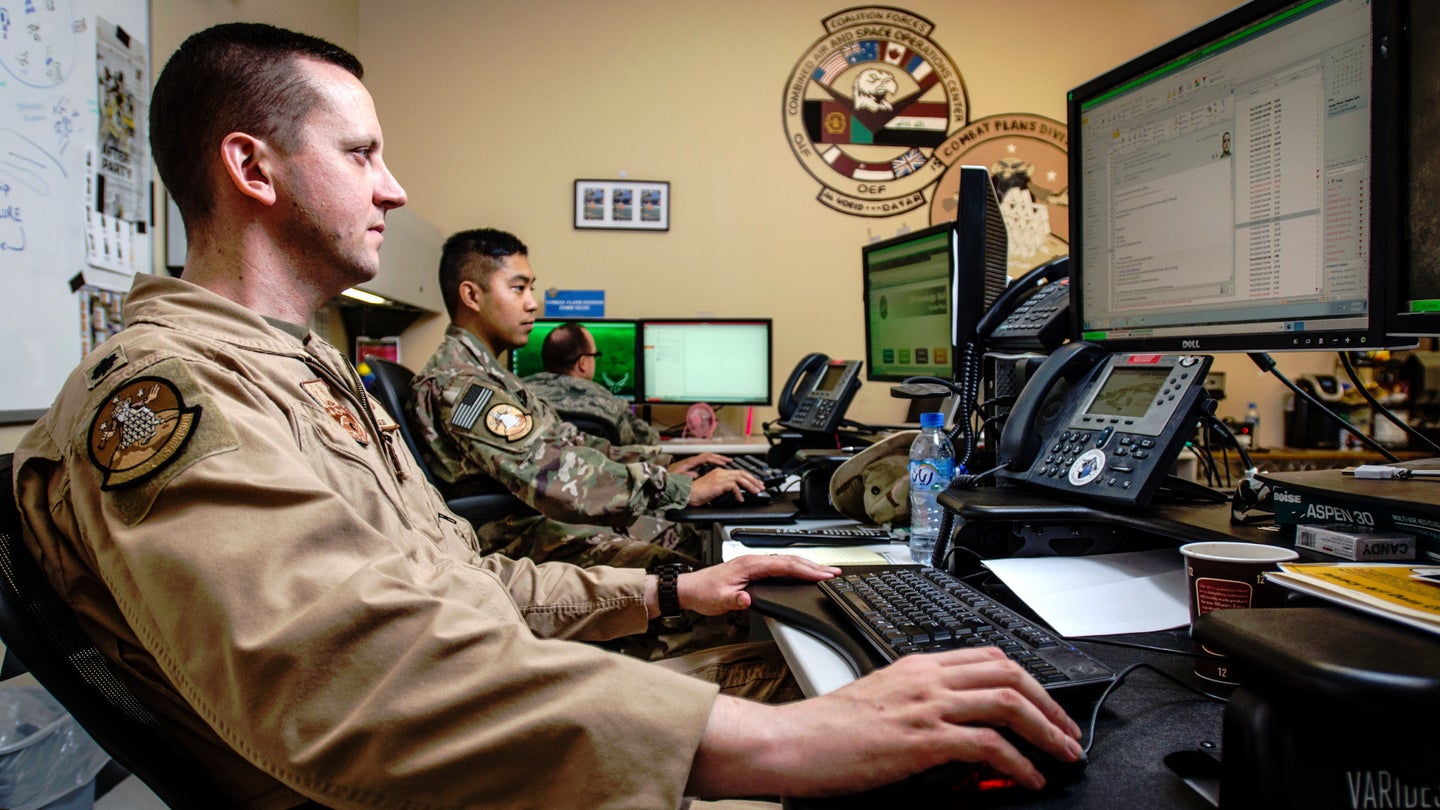 The U.S. Air Force shut down its nerve center for air operations all the way from Syria to Afghanistan for a day, and had airmen in South Carolina take over the management of those activities, as part of an extremely important exercise over the weekend. This is the first time in more than a decade that the so-called Combined Air Operations Center, or CAOC, in Qatar was not in control of regional operations. The decision to test this ability to shift responsibility to a command center in the United States came amid increased tensions with Iran following unprecedented suicide drone and cruise missile attacks on Saudi Arabia and the U.S. Air Force's growing concerns, in general, about the vulnerabilities of known bases to enemy strikes in any major conflict.

The Washington Post, which the Air Force invited to come and sit in on the exercise, was first to report on what it described as an "unannounced operation." The CAOC, also known as the 609th Air Operations Center (AOC), at Al Udeid Air Base in Qatar, ceased operations on Sept. 28, 2019. For 24 hours, personnel at Shaw Air Force Base in South Carolina were in control of all Air Force operations in the region, as well as coalition aerial activity in countries such as Iraq, Syria, and Afghanistan.

Construction of the CAOC at Al Udeid began in 2002 in the run-up to the U.S.-led invasion of Iraq the following year, according to the Air Force. It kicked-off operations in February 2003, just a month before coalition forces streamed into that country and toppled Iraqi dictator Saddam Hussein. The Post says that the operations center in Qatar, which today has representatives from almost a dozen other allied and partner nations, has been the sole entity in charge of American and coalition air operations in the Middle East and Central Asia since 2006.

Having personnel at Shaw, more than 7,000 miles away, take over makes good sense. The South Carolina base is the official home of U.S. Air Forces Central Command (AFCENT), the Air Force's top command for operations in the regions that the CAOC in Qatar serves.

However, the fact that there are direct linkages on an organization chart between the 609th and AFCENT does not necessarily mean that personnel back in the United States have the capacity or capability to assume responsibility for managing hundreds of aircraft flying all sorts of missions in and around the Middle East, if necessary, with no notice, during a crisis. This exercise was the culmination of work that the Air Force had done in order to assure that the hand-over would be as seamless as possible.

This included the re-activation of the 609th Air Support Squadron at Shaw on Sept. 18, 2019. This unit had previously been active at the base in South Carolina between 1994 and 2008, "supporting Air Force component planning, execution, combat support, and combat service support," according to the Air Force. After 2008, a smaller detachment of airmen technically assigned to the 609th AOC in Qatar, but co-located with the rest of AFCENT, continued to provide more limited support for operations downrange.

"We are truly distributed [around the globe]," U.S. Air Force Colonel Frederick Coleman III, head of the 609th AOC said at the re-activation ceremony for the squadron. "All of these people use technology provided, maintained, and protected by our own communications squadrons here at Shaw and at Al Udeid to plan, task, command, and control every airplane that flies, every bomb that is dropped, every pallet that is moved, from Egypt to Afghanistan."

It's hardly surprising that the Air Force has become concerned about what might happen to the CAOC at Al Udeid, and the rest of that base, should an actual conflict between the United States and Iran break out. The regime in Tehran has threated, on multiple occasions, to retaliate to any American strikes on its territory with attacks on American bases throughout the Middle East.

The base in Qatar is well within range of various Iranian ballistic and ground-launched cruise missiles. Recent, unprecedented attacks on oil infrastructure in Saudi Arabia have also underscored Iran's ability to employ suicide drones against major targets. U.S. Army Patriot surface-to-air missiles, as well as Qatari air defenses, guard Al Udeid, but the attacks in Saudi Arabia also highlighted how difficult it might be to first spot and then to try to shoot down incoming low-flying drones or cruise missiles, as the War Zone recently explored in-depth. Ballistic missile defense is hardly a sure thing, either, as you can read about more in this past War Zone feature.

Communications and command and control nodes are prime targets and even hardened facilities could be vulnerable to missile barrages or other mass attacks. There is also the threat of electronic warfare, cyberattacks, and other asymmetric operations, such as terrorist attacks, that could potentially hamper routine activities at the CAOC.

"The functions that the CAOC provides for air power are so critical and so essential that we can't afford to have a single point of failure," U.S. Air Force Major General B. Chance Saltzman, the deputy commander of AFCENT, told The Post. But Saltzman's point stretches beyond any possible conflict with Iran and applies to forward-deployed Air Force command centers, in general. Just with Al Udeid, since 2017, there have been concerns about the continued viability of U.S. operations at the base due to a serious and ongoing political spat between Qatar and a number of countries, chiefly Saudi Arabia and the United Arab Emirates.

In addition, for at least a year now, the Air Force has been actively voicing its concerns about what it would do and how it could continue to operate during a major conflict if it no longer had access to well-established bases in and around any theater of operations, including those in Europe or the Pacific, for any reason. You can read more about this in the issues at play in these discussions in this past War Zone piece. Being able to rapidly shift responsibility for activities in certain regions from one command center to another might not only be valuable, but essential in the future.

"We are changing the game," U.S. Air Force Lieutenant Colonel Christopher Reid, now head of the new 609th Air Support Squadron and previously in charge of 609th AOC, Detachment 1, said when he assumed command of the re-activated squadron. "This is about growth. We are changing the spectrum with how much distributed operations we can do anywhere in the world. We’ve demonstrated with our agile systems that we can access and support anywhere. This is built in resiliency. The growth of the squadron really is about continuing that trend."

Of course, a 24-hour shift in responsibility, where the CAOC in Qatar was able to resume its normal operations afterward, makes this more of an initial concept of operation than proof the personnel at Shaw would be able to take over for a protracted period of time. The distances involved also create different risks, including what could happen if U.S. military satellite communications were to be interrupted, another increasingly realistic concern. The Air Force will almost certainly take what it has learned from this particular exercise and use it to refine the process, correct any issues, and prepare for additional, more robust tests of the procedure in the future.

Regardless of whether or not tensions between the United States and Iran lead to an actual conflict, the Air Force also clearly intends for this added command and control infrastructure to be a permanent fixture, at least for the foreseeable future. We may well see similar concepts of operation emerge with regards to air operations centers responsible for American aerial activities elsewhere in the world, too.