Brazil's Ministry of Defense has reportedly begun the process of auctioning off its retired aircraft carrier, the ex-São Paulo, with bids starting at $1.275 million, roughly a tenth of what the country paid to buy the ship from France nearly two decades ago. The Brazilians formally decided to decommission the flattop two years ago, which has left the fate of the country's AF-1 Skyhawk carrier-based combat jets in limbo ever since.

The Brazilians officially put the carrier up for sale on Sept. 23, 2019, according to Airway1. Originally commissioned in the French Navy as the Foch in 1963, she was the second of two Clemenceau class aircraft carriers and remained in service in France until 2000. Brazil purchased the ship that same year for the bargain price of $12 million. At the time of São Paulo's retirement, there were only two other countries in the world, the United States and France, still operating catapult-assisted takeoff and barrier assisted recovery (CATOBAR) configured aircraft carriers.

Brazil's acquisition of São Paulo was part of a broader push on the part of the country's Navy to field a carrier-based fixed-wing tactical jet capability. This effort dated back to the 1980s and the elimination of rules that had said the Brazilian Air Force was the only service that could operate fixed-wing aircraft of any kind.

This previous inter-service arrangement had meant that the Air Force had been responsible for flying the S-2 Tracker anti-submarine warfare planes embarked on the Brazilian Navy's first aircraft carrier, the Minas Gerais, while the Navy flew helicopters from that ship's deck. This ship, another CATOBAR type, was a former U.K. Royal Navy World War II-era Colossus class carrier that Brazil had acquired from the United Kingdom in 1956.

In 1986, Minas Gerais' catapult broke and, what with having to rely on the Air Force for fixed-wing aircraft, the Navy elected not to fix it, bringing fixed-wing operations on the ship to an end for more than a decade. In 1995, Brazil began work to install a replacement catapult, acquired from Argentina after that country retired its aircraft carrier Veinticinco de Mayo, another Colossus class ship.

Two years later, Brazil signed a deal with Kuwait worth $70 million to acquire 20 single-seat A-4KU and three two-seat TA-4KU Skyhawk combat jets to form the core of the Brazilian Navy's new carrier air wing. These aircraft became known as AF-1s and AF-1As in Brazilian service. You can read more about these aircraft, all of which are assigned to the service's 1st Interceptor/Attack Squadron (VF-1), in detail here.

The Skyhawks, which arrived in Brazil in 1999, only served on Minas Gerais briefly, with the Brazilian Navy retiring that ship in 2001. The aircraft were better suited to the larger deck of the São Paulo, regardless.

Unfortunately, São Paulo did not live up to expectations. Though the Brazilian Navy only officially retired São Paulo in 2017, that ship had already been in a largely inactivate state for more than a decade. An explosion in the steam system powering the ship's catapults in 2004 killed one sailor and prompted a major overhaul that spanned between 2005 and 2010.

The total cost of the upgrades and improvements, which included extensive work on the ship's propulsion and electrical systems, updated catapults, a replacement Naval Tactical Data System, a new electronic support measures system, and more, along with a host of general maintenance, was around $19 million. This then required extensive sea trials and evaluations, which began in 2010. The ship was supposed to return to the fleet in 2013, but suffered a deadly fire in 2012, prompting new plans for more upgrades. By the end of 2016, São Paulo was still undergoing repairs and there were reports that it might take another decade to get the ship fully operational again.

By the time the Brazilian Navy finally decided to just retire the ship in 2017, it was the world's oldest commissioned aircraft carrier. In the better part of two decades that the flattop had flown the Brazilian flag, she had spent just 206 days at sea – less than a year in total – but had still managed to sail nearly 54,025 miles, according to Airway1. She had conducted less than 600 launches of AF-1 jets.

The decision to retire the ship has left the future of the AF-1s in limbo. In 2009, the Brazilian Navy had hired the country's preeminent aviation firm Embraer to conduct a deep modernization program on nine of the 20 AF-1s and the three AF-1As for a total cost of approximately $140 million. The resulting AF-1B and C variants, respectively, would have significant improvements, including all-new glass cockpits, hands-on throttle and stick (HOTAS) controls, digital radar warning receivers, and advanced pulse doppler EL/M-2032 radars from Israel's Elta. The jets would also be able to carry new air-to-air and air-to-ground munitions and modern targeting pods. You can read more about the upgrade program here.

Embraer only delivered the first and second AF-1Bs to the Brazilian Navy in 2015 and 2016, respectively. VF-1 got its initial two-seat AF-1C just last year. Whether Brazil decides to acquire the full fleet of AF-1B/C aircraft could be dependent on whether or not another carrier is in the country's future. Brazil did acquire the ex-HMS Ocean, a helicopter carrier, from the United Kingdom in 2018 for approximately $115 million. However, the AF-1s cannot operate from this ship, now known as the Atlantico.

There had been talk in the past about Brazil buying an entirely new aircraft carrier, as well as acquiring new carrier-based combat jets in the form of a navalized variant of the Saab Gripen. The Brazilian Air Force is the only foreign customer, so far, for the latest Gripen E/F variant. However, given the state of Brazil's economy and more pressing naval modernization priorities, these proposals seem to have firmly taken a back seat in the Brazilian Navy's future planning.

As time goes on, if VF-1's pilots cannot keep up their proficiency – if it hasn't lapsed already – in carrier operations in some way, such as exchanges programs with the U.S. or French naval aviation communities, the unit could increasingly take on the appearance of a land-based tactical jet unit. This, in turn, could increasingly call into question the value of maintaining the squadron and its diminishing fleet of Skyhawks, which no other element of the Brazilian military flies.

Short of the Brazilian Navy buying something like second-hand AV-8B Harrier jump jets to embark on Atlantico, which would then also need significant upgrades to be able to support those aircraft, the country's fixed-wing carrier aviation capabilities may again be coming to an end for the foreseeable future.

As for the future of the ex-São Paulo itself, is also uncertain, if Brazil's experience of trying to get rid of Minas Gerais is any indication. Naval associations in the United Kingdom tried and failed to raise enough money to buy that carrier and turn it into a museum ship. In 2003, the flattop appeared for sale on Ebay via a seller who claimed be a legitimate intermediary for the Brazilian government.

The auction site eventually pulled down the listing, which had reached a bid of nearly $8.9 million at the time, because it violated rules against selling military ordnance in the terms of service. A local auction in Brazil also failed to find a buyer and, in 2004, the carrier went to an ignominious end in a shipbreaking yard in India.

An organization known as the Sao Paulo Institute-Foch is now hoping to buy the ex-São Paulo and convert it into a floating museum, according to Airway1. It remains to be seen whether this will come to pass. The public auction in Brazil will reportedly occur tomorrow, Sept. 27, 2019.

If you're in Brazil this week and have at least $1.275 million to spare, you can try to make your own bid to become the next owner of this vintage aircraft carrier. 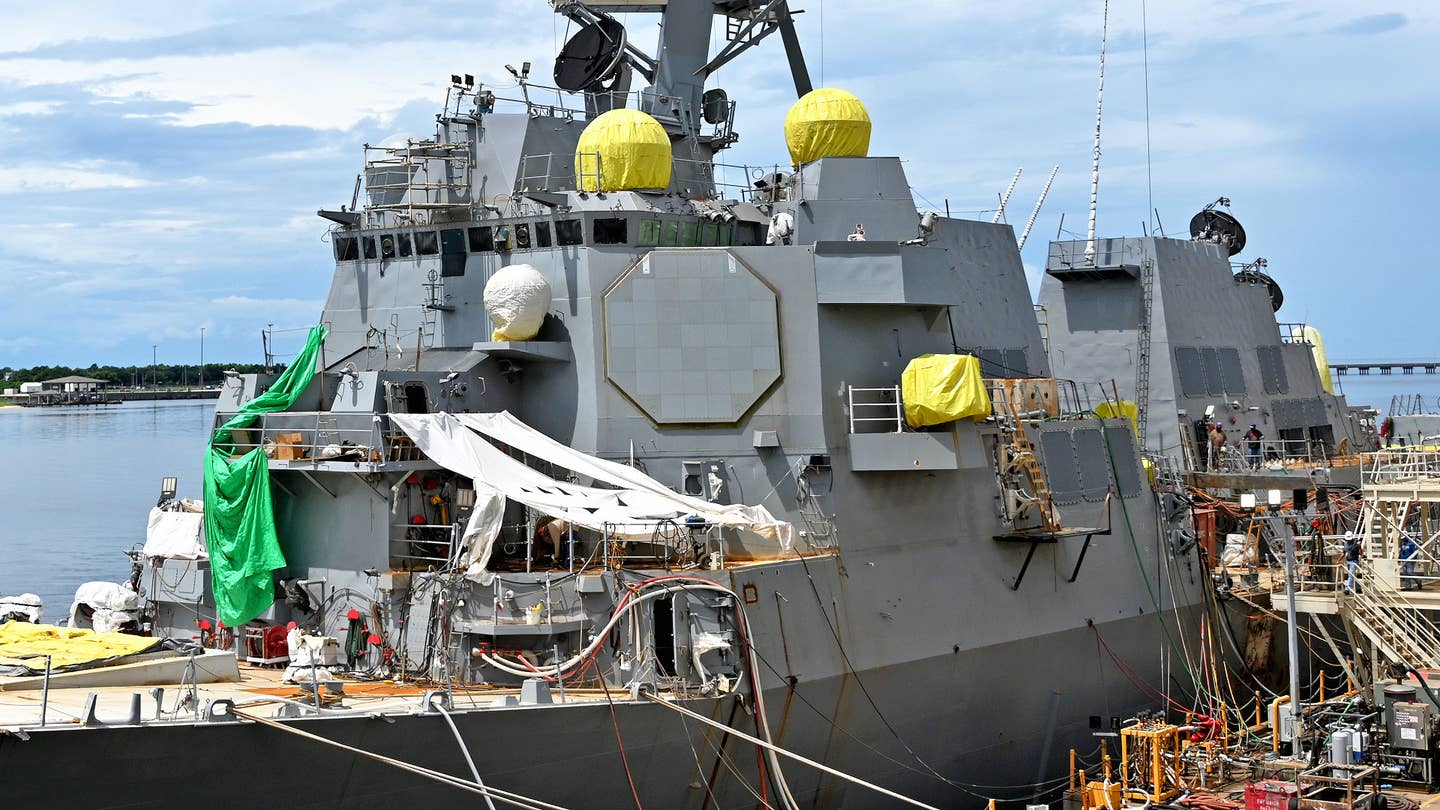 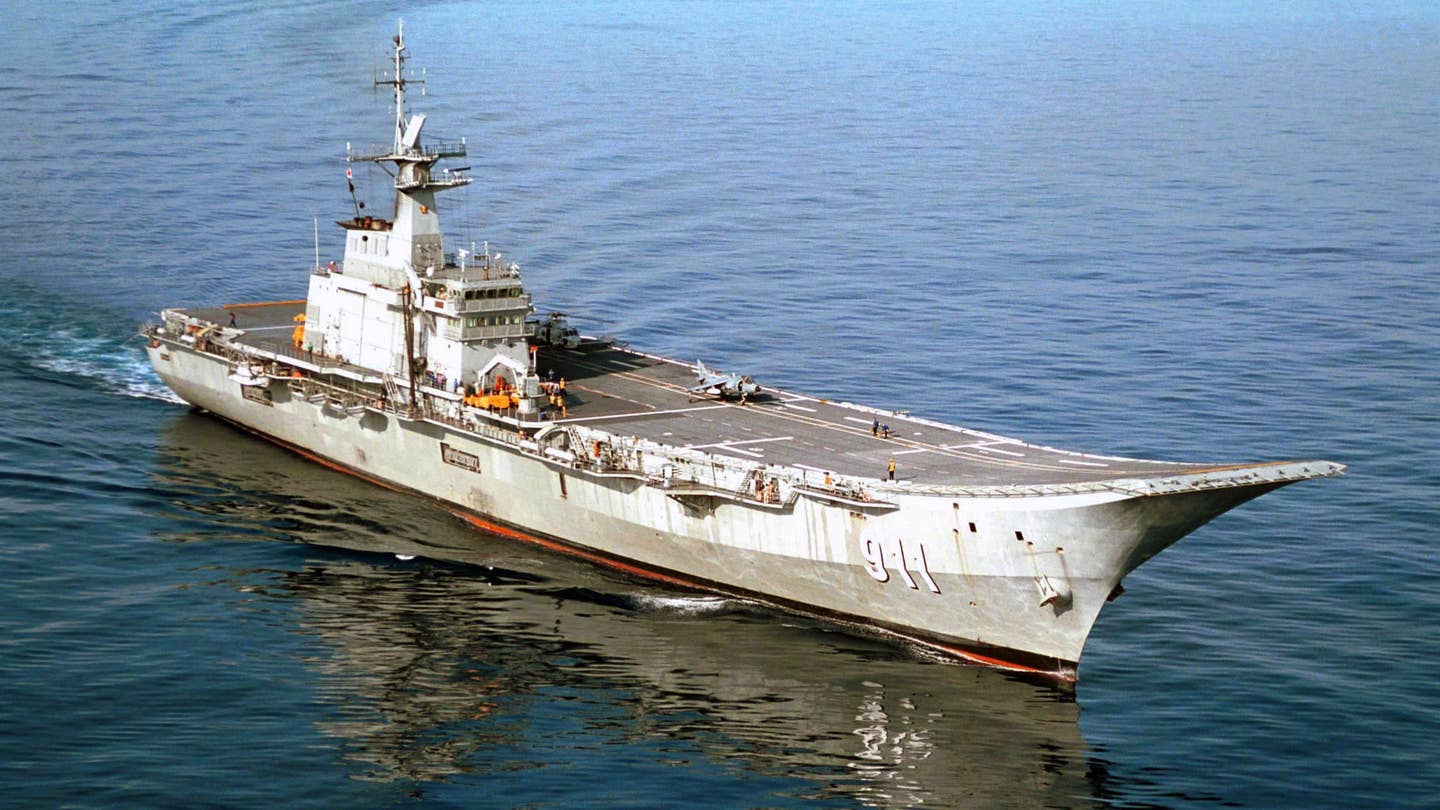