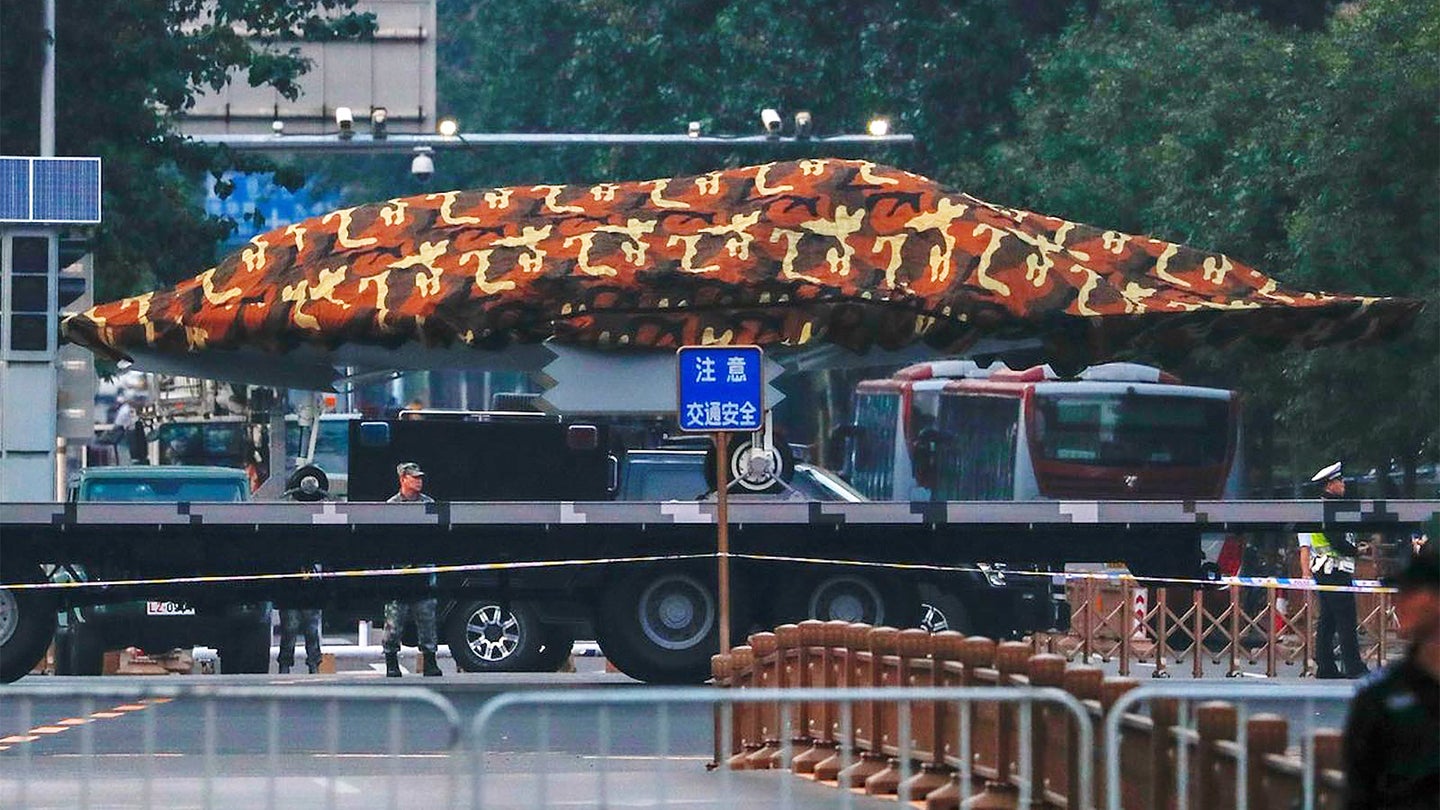 I have received many questions regarding a report in the South China Morning Post that claims China's Sharp Sword stealth flying wing unmanned combat air vehicle (UCAV) will be deployed aboard the People's Liberation Army Navy (PLAN) carriers in the not so distant future. The article states that according to its undisclosed sources, the drone would be unarmed and would work in a reconnaissance role. Readers seemed puzzled as to why this would be, but the reality is that it makes perfect sense and goes along with my thoughts on the topic dating back nearly a decade. Those unarmed stealthy drones would actually represent the most deadly aircraft in China's carrier air wing. Here's why.

We have been closely tracking China's remarkable progress in advanced, stealthy, unmanned aircraft technology over the years. Keeping in mind that Beijing only shows us what they want us to see, China is clearly and deeply committed to developing stealthily unmanned combat air vehicles and building out the command, control, and communications infrastructure needed to get the most of them in future conflicts. They likely got a huge boost in this expansive endeavor after America's RQ-170 Sentinel stealth spy drone fell into Iranian hands back in 2011. But that's beside the point. The fact of the matter is that straight-up combat punch is just one mission objective when it comes to China's work in developing these aircraft—surveillance and reconnaissance are the others.

Above all else, China needs to develop and deploy intelligence-gathering systems that will enable its anti-access and area-denial capabilities—especially its anti-ship ballistic missiles and long-range anti-ship cruise missiles. These systems require near-real-time targeting data to get their terminal targeting seekers looking in the right spot during their final attack stage of flight. This means having an asset that can data-link pre-launch targeting information and even updated targeting information to the missile during its mid-course stage of flight.

Such an act can be done via a number of methods, although those methods become more limited during an actual conflict. For instance, shadowing a flotilla with a ship can provide this data during a time of peace, but not during a time of war. Satellites may be able to provide some capabilities in this regard, but they too have major limitations and can be jammed, blinded, or destroyed during a conflict

Maritime patrol aircraft that can fly far from their bases and are optimized for detecting and classifying ships at sea are among the best tools for the job, but during a time of war, getting within radar detection range and being able to survive to provide sustained targeting information to missile units hundreds or even thousands of miles away is a very questionable proposition—especially when trying to do so against a U.S. Navy carrier strike group. The Aegis umbrella that is backstopped by E-2 Hawkeye early warning aircraft and fighter patrols makes successfully bringing a maritime patrol aircraft's sensors to bear on such an armada very questionable if not impossible if open hostilities are underway.

This is where two types of unmanned aircraft come into play. First off, there are high-altitude, long-endurance (HALE) remotely piloted vehicles that can fly across vast distances and leverage their high-altitude perch to stay farther away from the deadly maritime targets they are trying to locate. Such a craft could loiter just beyond the perimeter of an enemy flotilla's defenses while providing targeting data to missile units. It could then scoot away once the missiles are well on their way and sufficient telemetry has been communicated to them so that they have a high probability of hitting their targets.

China has multiple HALE designs flying—such as the Guizhou Soar Dragon and the Shenyang Divine Eagle. While these drones are great for scanning huge swathes of ocean for potential targets of interest over many hours of flight time—like America's MQ-4C Triton—they are still quite vulnerable and they have to sortie from land bases that could be thousands of miles from an area of interest. Just this long dispatch time alone is problematic for detecting armadas at sea. They also rely entirely on satellite data-links that could be degraded during a time of war. Still, they can cover a lot of ocean area and could be especially effective when their use is paired with other types of intelligence.

The second is the medium-altitude, medium-endurance (MAME) classes of drones that could theoretically be launched off an aircraft carrier. Such a craft can expand the sensor reach of China's ski-jump configured flattops and their escorts. What it lacks in extreme range or attitude, it can make up for in higher sortie rates, higher-transit to station times, and forward deployability.

As China's carrier capabilities push farther into 'blue water'—far away from land where even divert airfields are not within reach of the carrier's aircraft—MAME drones could give China the ability to push its sensor capabilities farther out without relying on very long-range patrol aircraft or HALE drones. Add in stealth capability, and such a drone could venture close enough to enemy ships to not only detect their presence, but to continuously relay targeting data as to their whereabouts in a survivable manner.

This data could be used to direct anti-ship missile attacks from Chinese warships, the carrier's strike fighter aircraft, or long-range anti-ship cruise and especially anti-ship ballistic missiles located on land or launched from lumbering missile carrier aircraft. Ideally, an attack would be coordinated to involve a number of these capabilities simultaneously, making it far more challenging to defend against.

Stealthy carrier-capable MAME drones also could provide a means of relaying this information without using onboard satellite data-links. By 'daisy-chaining' a few of these aircraft together over a long distance, they can relay information from the forward-most craft across the others via directional line-of-sight data-link, which can be very hard to detect or disrupt. The last craft on that chain can then relay the information down to a surface entry point, such a Navy ship, where it can then be sent up to satellites overhead and back to missile units on land or in the air. Otherwise, satellite connectivity isn't really needed at all for targeting as the Chinese carrier strike group could prosecute its own standoff attack using the drone's line-of-sight data-link telemetry alone.

Configuring a stealthy UCAV like drone, such as Sharp Sword—which has been in flight testing for nearly six years now—for this mission makes great sense. Eliminating its weapons carriage capabilities would probably be necessary to reliably launch it off China's ski-jump equipped carriers that don't benefit from a catapult's assistance. A configuration without a weapons bay would allow designers to tailor the aircraft's weight, sensor, and fuel load to the ski-jump's limitations. And as you can see by what we just discussed, its unarmed 'hunter' role would be far more impactful than an armed one, anyways.

That's not to say that an armed variant isn't possible—once China's catapult equipped carriers come online it is nearly a given—and a land-based model with weapons bays would fulfill a traditional UCAV role. So, it's not really a one configuration or the other proposition, but when it comes to hunting and fixing enemy carrier strike groups or logistical convoys far out to sea, a carrier-based reconnaissance version would be an absolute game-changer. It would also make China's carriers much more potent force multipliers than they currently are. It's also worth noting that such an aircraft could provide other intelligence gathering and communications relay functions when not hunting for enemy flotillas.

Regardless of if it ends up being a variant of Sharp Sword—there are other potential contenders—the possibility that China will pair its somewhat limited fixed-wing carrier capability with a stealthy surveillance drone is extremely high. It fits exactly with their anti-access/area denial strategy track record and with how they have an uncanny knack for finding weaknesses in America's and its allies' combat doctrine to exploit.

The U.S. Navy had passed over its own promising stealthy strike and surveillance UCAV program just a few years ago. Instead, it pushed to develop an unarmed tanker drone with some basic surveillance potential. While many, including the author, found that to be an incredibly nearsighted mistake, it is worth noting that the aircraft chosen, Boeing's MQ-25 Stingray design, was adapted directly from the aforementioned UCAV program. Literally, the UCAV demonstrator's airframe was reworked for the tanker competition.

Even though the American carrier strike group features a far more robust surveillance umbrella than China's, it still could benefit from a sensor carrying drone that can range out very far while also featuring low-observable features to reduce its detectability. With this in mind, it won't be surprising at all if we see a stealthier version of Boeing's MQ-25 quickly follow its tanker progenitor, essentially returning the design back to its original surveillance and strike configuration. Lockheed Martin, whose flying-wing concept lost the MQ-25 tender, also saw this as an eventuality.

Still, much of the Navy's MQ-25 program isn't just about the plane, it is also about developing and deploying the infrastructure and operating concepts needed to field a semi-autonomous drone from an operational aircraft carrier. So once that infrastructure is in place, adding capabilities should be quite easy, especially if it means leveraging the same basic airframe as the tanker model.

It will be interesting to see what country fields such a capability first, but at this point, it seems that China is already pursuing it and its forces definitely have a more pressing need for it than those of the United States. Just as I predicted in 2012, the ability to provide targeting information to China's long-range missile forces is essential not just when it comes to making those capabilities work, but also for the deterrence factor behind its anti-access, area-denial strategy.

You can bet that just photos of a stealthy Chinese drone operating from the country's growing carrier fleet will serve as a wakeup call for many in regards to the realities of a very much unmanned air combat future.