China's first flattop amphibious assault ship will give the PLAN powerful new capabilities and a second example is already under construction. 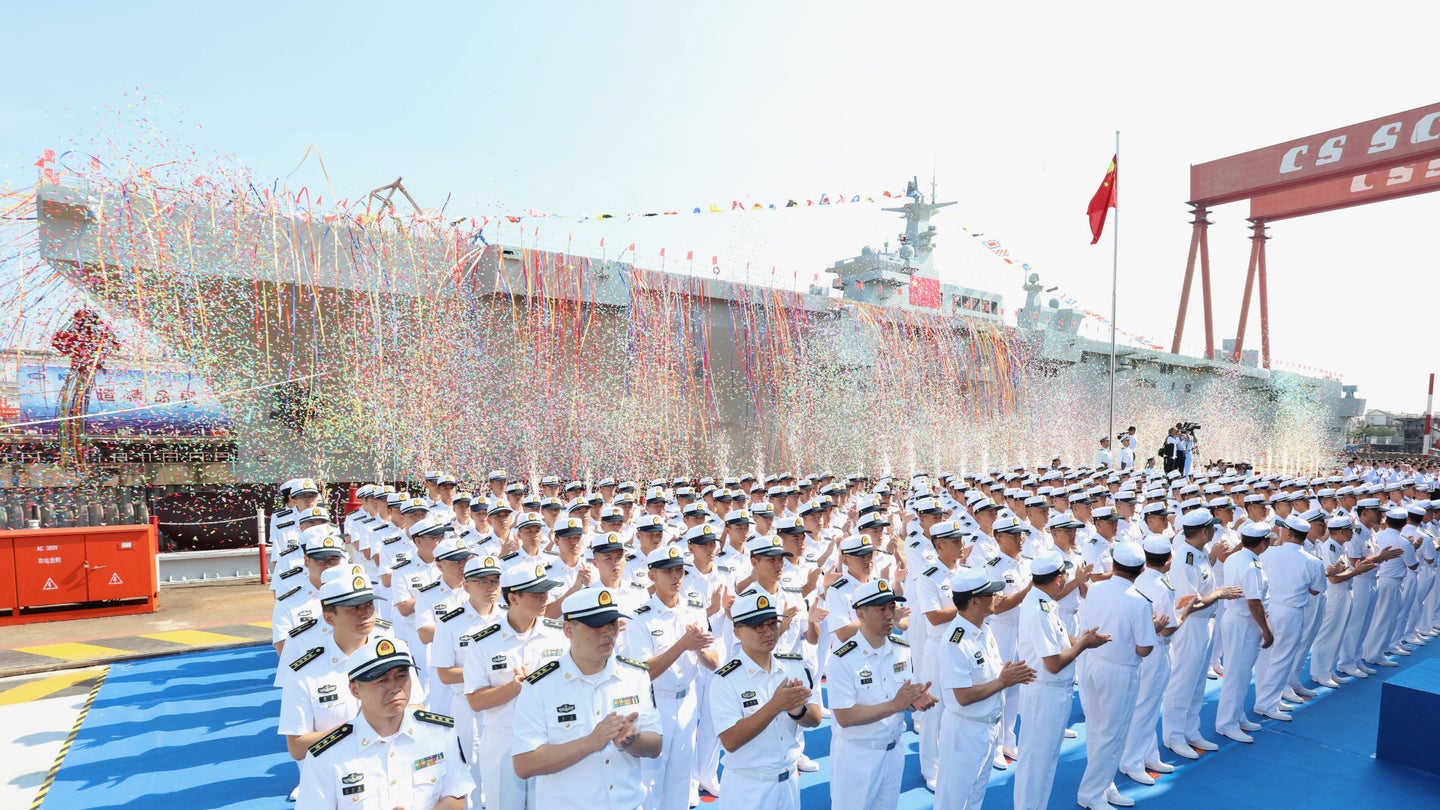 Some five months after the first pictures emerged of its keel under construction, China has launched its first Type 075 landing helicopter dock amphibious assault ship, or LHD, at the Hudong-Zhonghua Shipyard in Shanghai. This achievement comes just days before the country marks the 70th anniversary of Communist state's founding. The speed with which the Chinese have been able to execute its construction is as impressive as the ship's size. The vessel will significantly increase the People's Liberation Army Navy's amphibious warfare capabilities, and the China State Shipbuilding Corporation is already building a second example.

Dockworkers at Hudong-Zhonghua launched the still-unnamed Type 075 LHD after a ceremony on Sept. 25, 2019. Images began to emerge online of the ship's keel under construction between April and May 2019, though it is unclear when the China State Shipbuilding Corporation (CSSC) formally began work on the ship. Workers will now complete the final phases of construction with the vessel in the water. There is no word yet on when the Chinese expect it to head out for its first sea trials or actually enter service with the People's Liberation Army Navy (PLAN).

"Officials from the central and Shanghai governments, officers from the Central Military Commission's Equipment Development Department and the PLA Navy, executives of the State-owned conglomerate China State Shipbuilding Corp, as well as the vessel's designers and construction workers applauded as they watched the launch process," an official statement declared, according to China Military, an official PLA news outlet. There were reportedly no additional details about the ceremony in that press release.

Specifics about the Type 075's size and capabilities remain limited. Development of the ship began in 2011, at which time reports said that it would displace "more than" 30,000 tons. More recent estimates suggest its final displacement is somewhere between 35,000 and 40,000 tons, which would put it in a size class close to the U.S. Navy's Wasp class amphibious assault ships. This would make it significantly larger than many similar ships that other countries in the Asia-Pacific region operate, including Australia's 27,500 ton-displacement Canberra class and 18,800-ton displacement South Korea's Dokdo class.

The Type 075 is also bigger and more capable than the Type 071 amphibious transport docks, or LPDs, which are presently the PLAN's largest operational amphibious warfare ships. The Type 071, which displaces around 25,000 tons, has a smaller flight deck at the stern and hangar space for up to four Z-8 heavy transport helicopters.

By comparison, the new LHD will have a dedicated hangar deck below its flight deck and will reportedly be able to carry between 28 and 30 helicopters of various types, including the Z-8 and the smaller Z-9 utility and light attack helicopters. China does not have any short takeoff and vertical landing capable combat jets at present, but it is at least exploring this possibility and the Type 075 could already have design features to support fixed-wing operations in the future.

It is not clear how many Marines the Type 075 will be able to accommodate, but its full complement will likely be much larger than that of the Type 071, which can carry between 600 and 800 troops, as well as their ground vehicles and other equipment. The U.S. Navy's Wasp class, for example, can carry 1,650 Marines, along with their light armored and unarmored vehicles and other equipment. Similar to the American ships, China's new LHD also has a well deck that can hold multiple Type 726 air cushion landing craft – roughly analogous to the U.S. Navy's LCAC – in order to move personnel, vehicles, and other cargo ashore.

The exact armament fit on the Type 075, including systems for self-defense, is also unknown. Reports say that it will include at least two H/PJ-11 30mm close-in weapon systems (CIWS), also known as the Type 730, and a pair of FL-3000N point defense surface-to-air missile systems. Pictures of the ship at its launch ceremony, and in the days and weeks before, show what appears to be at least one FL-3000N in place at the stern and one forward of the ship's island superstructure. A Type 730 CIWS is also seen amidships on its port side.

Regardless of how much the ship actually displaces and what its exact capabilities are, what may be most impressive about it is China's ability to proceed so fast with its construction. Chinese shipyards have already demonstrated their ability to produce large surface warships with relative rapidity, but work on the Type 075 has progressed at a particularly fast pace. For comparison, it took three years between keel-laying and launch to build the U.S. Navy's second in class USS Tripoli (LHA-7). Also, keep in mind that the U.S. has been building flattop amphibious assault ships for the better part of a century. This is China's first.

It is possible that the goal was to have this ship launched ahead of celebrations to mark the 70th anniversary of the founding of the Communist State on Oct. 1, 2019, and that CSSC did everything possible to ensure it could meet this timeline. How fast Hudong-Zhonghua is able to get the second hull in the water may offer some insight into how sustainable this pace of work actually is. The first tranche of Type 075s will reportedly consist of three ships in total.

Still, the Type 075 only further underscores the significant modernization and expansion underway within the PLAN, as well as across the PLA as a whole. The new LHDs will dramatically transform the PLAN's ability to conduct amphibious operations, including against Taiwan, especially if grouped together with other existing assets, such as the Type 071s and the country's massive Russian-made Zubr class hovercrafts, which you can read about more here.

The expanded amphibious capabilities the Type 075 will offer could have significant impacts on China's military presence throughout the Asia-Pacific region, including its ability to assert its claims over disputed areas, such as the South China Sea, where the country already has an extensive network of man-made island outposts. They could also be valuable for exerting Chinese influence further abroad, coupled with a growing number of bases in foreign countries. China also operates one of the largest hospital ships anywhere in the world, its lone Type 920, which offers a relatively unique capability that could be essential for supporting expeditionary operations further from the Chinese mainland.

This could extend beyond traditional military operations. American amphibious warfare ships have historically been a go-to option for extracting U.S. citizens from countries experiencing sudden and violent upheaval and a vital tool for responding to natural disasters. PLAN amphibious warfare groups built around Type 075s could similarly help rescue Chinese nationals, who are working in ever-increasing numbers in potential hotspots around the world, or respond to humanitarian crises at home and overseas. China already employs its Type 920 hospital ship as a valuable soft-power tool.

With the Type 075's construction proceeding so quickly, it is very possible that the ship will be ready for sea trials relatively soon. At the same time, we may begin to learn more about its exact features in the coming months now that the lead example of the class is in the water and will be getting fitted out.

No matter what, the Type 075's launch is simply another clear demonstration of China's desire and ability to increase the size and scope of its naval capabilities, with a clear eye toward operations further and further from Chinese shores.

Within 24 hours of the ceremony, the first Type 075 has left drydock.