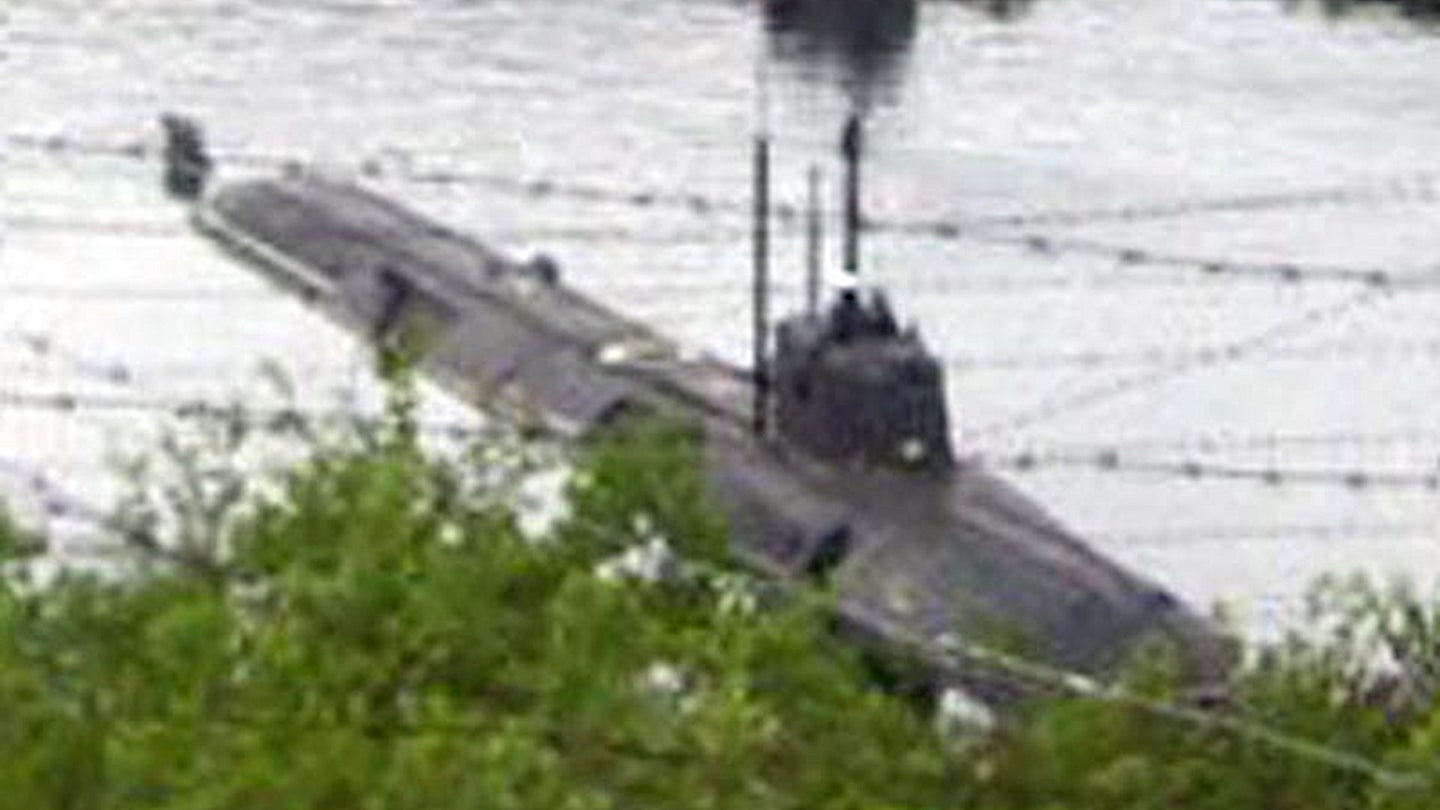 Russia will reportedly soon tow its top-secret nuclear-powered Project 10831 Losharik spy submarine to a shipyard in northwestern Russian for extensive repairs. The boat suffered serious damage in a fire on July 1, 2019, that ultimately killed 14 submariners. Reports offering additional details about the accident have also begun to emerge, though the Kremlin has offered little in the way of official information about the incident, just as it has continued to be coy about exactly what happened during a recent explosion during a missile test that involved a nuclear power source in the same region.

On Aug. 14, 2019, state-run media outlet TASS, citing an unnamed Russian defense industry source, reported that Losharik, also known by the hull number AS-31, would be heading in the fall to the Zvezdochka Ship Repair Center in the city of Severodvinsk in Russia's northwestern Arkhangelsk region. Zvezdochka is part of Russia's state-owned United Shipbuilding Corporation and has performed work on nuclear-powered submarines in the past. Representatives from Sevmash, the shipyard that built Losharik, as well as the Rubin design bureau, which crafted the submarine's specialized deep-diving design, which you can read more about here and here, will also be involved in the repair work, though there is no timeline yet for when the sub might return to service.

"This fall, Losharik will be towed for repairs to Zvezdochka," TASS's source said. They added that the first phase would involve pumping water out of the submarine, indicating that there had been flooding of one or more compartments, as well as a thorough inspection of the boat's titanium inner hulls to ensure its integrity had not gotten compromised in the accident.

Lorsharik reportedly has a unique internal arrangement consisting of a number of spherical titanium alloy sections linked together that sit inside an outer hull that has a more traditional submarine shape. This is key to the submarine's deep-diving capabilities, which allow it to descend to depths of at least 3,300 feet, with some sources saying it can descend below 6,600 feet.

This is apparently also the source of the boat's name, which is a reference to a Soviet-era animated children's film about a circus animal shaped like a horse, but made from jugglers' balls strung together. "Losharik" is a portmanteau of the Russian words for horse, "loshad," and small ball, "sharik."

After personnel at Zvezdochka get all the water out and conduct that initial inspection, then they can get to work on actually fixing the submarine's damaged internal components. TASS's source said the damage from the fire was "significant," but implied that the full extent of the situation remained largely unknown more than a month after the accident. "Preliminary estimates" had indicated that navigation equipment, life support systems, sonar components, and various other systems would need to be replaced entirely, they added.

A second unnamed source had also told TASS that Sevmash would build new titanium hull parts, suggesting that the internal damage is far more significant than previously understood. This would align in many ways with a separate report from Russian newspaper Kommersant on July 23, 2019. Again, citing only anonymous sources with knowledge of the accident and its aftermath, it still offered one of the most complete accounts to date of what might have happened.

The Main Directorate of Deep-Sea Research, Russia's main naval intelligence entity, also known by the Russian acronym GUGI, operates Losharik and its primary missions are investigating, manipulating, and recovering objects on the seabed, such hunting for items of intelligence value or tapping or cutting seabed cables. The small submarine is also designed to ride underneath a larger submarine mothership to get closer to the target area. GUGI has a number of motherships converted from ballistic missile and cruise missile submarines.

Losharik was reportedly attached to the modified Project 667BDRM Delfin-class ballistic missile submarine BS-64 Podmoskovye following a training exercise in the Russian Navy's Northern Fleet's training ground in Motovsky Bay in the Barents Sea when the fire broke out on July 1. The fire, which started in Losharik's battery compartment, did not appear to be particularly serious initially, according to Kommersant's sources. You can read about why fires onboard submarines can quickly and easily become very serious in this previous War Zone story.

Still, 10 members of the spy submarine's crew, reportedly remained on board to fight the fire, using PDU-3 portable breathing devices, which have enough oxygen to allow the user to breathe for up to 20 minutes. Russian Navy rules also stipulate that a submarine's crew remain in place to deal with any fire, unless specifically ordered to evacuate, on penalty of criminal charges, Kommersant's sources said.

Kommersant's sources could not say for sure what happened next, since all 10 of these individuals subsequently died and the investigation to determine the causes of the accident and what exactly transpired remains ongoing. These submariners reportedly fought the fire for more 40 minutes, exchanging their first PDU-3s for additional fresh ones from the stocks onboard and then using a fixed emergency breathing apparatus to continue their work.

When some of the submarines on Losharik started to pass out from a lack of oxygen, the remaining individuals asked for permission to leave Losharik and escape into the BS-64 to which the midget submarine was still attached. Podmoskovye's commander agreed to this and reportedly sent a team of four additional submariners to help get everyone out.

Again, Kommersant's sources say that it's unclear what happened, since those four individuals also died, which accounts for the official death toll for the accident. An initial investigation after BS-64 and Losharik returned to the Russian Navy's base in Severomorsk, which is situated relatively close to the reported site of the accident, turned up evidence that one of the batteries had exploded, sealing the fates of those on board and the rescue team.

How and why the battery blew up remains unknown, according to Kommersant's report. The newspaper pointed out that Losharik originally used silver-zinc batteries from a supplier in Ukraine, which was part of the Soviet Union when Sevmash began building the submarine. The Russian Navy has since reportedly swapped these out for Russian-made lithium-ion batteries given the virtual impossibility of obtaining replacements from Ukraine, which gained independence in 1991. In 2014, Russia seized Ukraine's Crimea region and began actively supporting separatists fighting the Ukrainian government, and the two countries have been engaged in a low-level conflict ever since.

Lithium-ion batteries, especially if they're cheaply made and the system they're installed in short circuits, can definitely catch fire and explode. This has led to numerous restrictions on how people can transport and ship them in recent years. It's hardly unheard of for submarines to use lithium-ion batteries, though, such as Japan's Soryu class.

Russian officials have also taken some of the batteries and deliberately blown them up with explosives to create a forensic baseline to check for the possibility, albeit reportedly remote, that terrorists, spies, or criminals might have deliberately tried to blow up Losharik, according to Kommersant.

Whatever the case, depending on the severity of the explosion, this could help explain the damage to the inner hull and the flooding, as well. At the same time, it remains unclear what the risks might have been to the submarine's other compartments, including its nuclear reactor, or to its hull integrity, in general. We don't know whether the explosion posed a danger to the nuclear-powered BS-64, either.

"They all shared one and the same fate – to save the lives of their comrades, to save their vessel and to prevent a catastrophe of global proportions at the cost of their own lives," Sergei Pavlov, an aide to the Russian Navy’s top commander, reportedly said at a memorial service for the 14 submariners who died on July 6, 2019, according to Russian media outlet Fontanka. There remains speculation that this is an admission that if Losharik's crew had not continued to fight the fire, there would have been a serious risk of a major nuclear accident.

It seems unlikely that the Russian government itself will release much in the way of official confirmation about any such revelations, at least in the near future. The Kremlin is historically very tight-lipped about major military accidents, especially ones that might have a nuclear component. Just last week, a mysterious explosion occurred at a missile test site just to the west of Severodvinsk, leading to mounting evidence that the incident involved a controversial nuclear-powered cruise missile called Burevestnik and that the accident resulted in a radiation leak of some kind. You can read more about what we know about this incident so far here and here.

Submarine accidents, of which Russia, and the Soviet Union before it, have had many, are particularly sensitive for the Russian government. In 1989, the one-of-kind nuclear-powered Project 685 submarine K-278 Komsomolets experienced a short circuit that triggered a fire, which sounds very similar to what happened to Losharik in July. However, Komsomolets, which was also carrying two nuclear-armed torpedos at the time, sunk in the Barents Sea and is now on the seabed leaking radiation.

Two years later, right before the Soviet Union collapsed, the Typhoon class ballistic missile submarine TK-17 suffered a major accident and might have sunk after an R-39 Rif submarine launched-ballistic missile blew up in its launch tube. Thanks to the quick decision making of Captain Igor Grishkov, TK-17 survived the incident.

The sinking of the Russian Navy's nuclear-powered Project 949A Oscar-class submarine Kursk in 2000, which resulted from a pair of explosions and killed all 118 personnel on board was a major embarrassment for the country. It was also a very personal experience for Russian President Vladimir Putin, who was in his first term at the time and received significant criticism for his handling of the incident.

The Lorsharik fire was the deadliest submarine disaster for Russia since 2008, when the fire suppression system on nuclear-powered Project 971 Akula-class submarine Nerpa accidentally went off, killing 20 and injuring 41 more. Nerpa is now in service in the Indian Navy under a lease deal as the INS Chakra.

Fires and other accidents continue to plague Russian shipyards and other military sites. Just days before the nuclear engine explosion, an ammunition depot in Siberia blew up, sending a massive shockwave and debris flying into neighboring communities and touching off a fire that took days to put out. Just in the past two years, there have been multiple fires at shipyards and naval bases. An electrical malfunction also that sunk the Russian Navy's largest floating dry dock, which had the country's only aircraft carrier, the Admiral Kuznetsov, in it at the time, last year.

Still, after Losharik gets to Zvezdochka later this year and there is a chance for more extensive investigations, more reports may begin to emerge with additional details about the accident and just how serious the damage was to the spy submarine.