Russia's Sukhoi S-70 Okhotnik-B, or Hunter-B, flying wing unmanned combat air vehicle, or UCAV, flew for the first time recently and now the country's Ministry of Defense has released video of the flight. Images of the drone had first emerged on Russian social media in January.

The Russian Ministry of Defense officially announced the milestone last week, though it did not provide any imagery. The S-70 flew for more than 20 minutes, cruising at an altitude of around 1,970 feet on a route around an unspecified air base, according to the official statement at the time. This first flight was originally scheduled to occur sometime in the Spring, but was delayed for unknown reasons.

It is not immediately clear where or when this test occurred. As of May 2019, satellite imagery and official Russian government statements confirmed that at least one Okhotnik-B was at 929th Chkalov State Flight-Test Center in Russia's southwestern Astrakhan region. However, a separate report from AINonline in June says that the first flight had occurred on May 25 at Sukhoi's Novosibirsk Aircraft Production Association's (NAPO) plant in the region of the same name.

The video the Russian Ministry of Defense has now released, seen below, shows the drone taxiing, taking off, flying around the base, and landing. The UCAV, which is roughly in the same general size class as Northrop Grumman's X-47B, is now carrying a bort number, Red 071, as well as the new paint scheme that was previously visible in the satellite imagery from Chkalov. It remains unclear if this means this is a refined design, or even an additional prototype, that is separate from the one seen in the pictures that appeared in January.

The most immediate visual difference on the drone in the test flight video is the addition of two flight data probes temporarily installed on the leading edge of the wing, one on each side of the main air intake. This is not uncommon to see during flight tests. A U.S. Air Force RQ-170 Sentinel stealth drone was spotted flying an apparent test sortie from Vandenberg Air Force Base in California in 2017 with a similar probe, something The War Zone

The configuration of the undercarriage, as well as the air intakes and antennas on top and underneath the fuselage, look largely unchanged from those that were visible in the January 2019 pictures, which were reportedly taken during a ground test at NAPO.

The drone's engine exhaust also remains entirely exposed. We still do not know what type of engine the UCAV uses, but a variant of the Saturn AL-31F series found on Sukhoi's Flanker fighter jet family remains a likely possibility. You can read The War Zone's full analysis of the S-70 design based on what was visible in January, assessments that remain largely unchanged, here.

The Russian Ministry of Defense now says that the primary missions for the S-70 will be intelligence, surveillance, and reconnaissance, using both electro-optical and infrared sensors and signals intelligence systems, as well as electronic warfare. However, its general size would allow it to accommodate weapons internally.

The Russians also continue to claim that the unmanned aircraft uses composite structures and special stealth coatings to make it "practically invisible" to radar, but the design as it stands now remains far from very stealthy. The most obvious problem is the engine arrangement, which appears to have the inlet and exhaust relatively in line, as well as no shrouding for the exhaust at all, features that can only hurt the drone's low observable characteristics. The various intakes and antennas dotting the fuselage only compound these issues, although some are likely installed for testing purposes alone.

Steve Trimble, our friend and defense editor over at Aviation Week, also noted how Hunter-B's wing design has a high similarity to that of the officially retired, but still flying F-117 Nighthawk. The sweep of its wing is somewhat similar to that of the F-117, but it's worth noting that the same general wingtip configuration is used by the RQ-170 Sentinel, as well. It would be remiss if we weren't to mention that the Skunk Works' flying-wing Sentinel spy drone likely informed Russia's Hunter-B design in more ways than wingtip design alone. The example that fell into Iranian hands was thought to have been at least examined by Russian engineers. Where technologically possible and logical, Moscow would have incorporated its secrets into their Hunter-B design and the operating concepts that are derived from it, much of which lies beneath its skin.

has previously noted, the high sweep of the drone's wing, combined with its engine configuration, could potentially give the Okhotnik-B higher performance, potentially allowing it to fly at transonic or even supersonic speeds, if only during short sprints. A less stealthy, but higher performance design that could keep up with manned fighter jets could turn the S-70 into a viable "loyal wingman," especially for Russia's Su-57 advanced combat jets. We've already seen evidence that there is some link between these manned and unmanned developments at Sukhoi.

It seems likely that the Kremlin is still working on developing its exact concepts of operation for the S-70, and how those might fit together with other platforms, despite the comments on the drone's official expected mission sets, too. With Russia's history of deferring, canceling, and then reviving advanced combat aircraft programs, it is possible that the overall plans for Okhotnik-B are not necessarily rigid.

Notably, the drones had previously offered a lower cost means to expand the Russian Air Force's advanced air combat capabilities in lieu of the Su-57. However, the Kremlin recently reversed its decision to put serial production of those manned fighter jets on indefinite hold and now says it will buy as many as 76 of them in the coming years.

Now that the S-70 has begun flight testing we may begin to learn more about its exact capabilities and just how the Kremlin plans to put them to use. 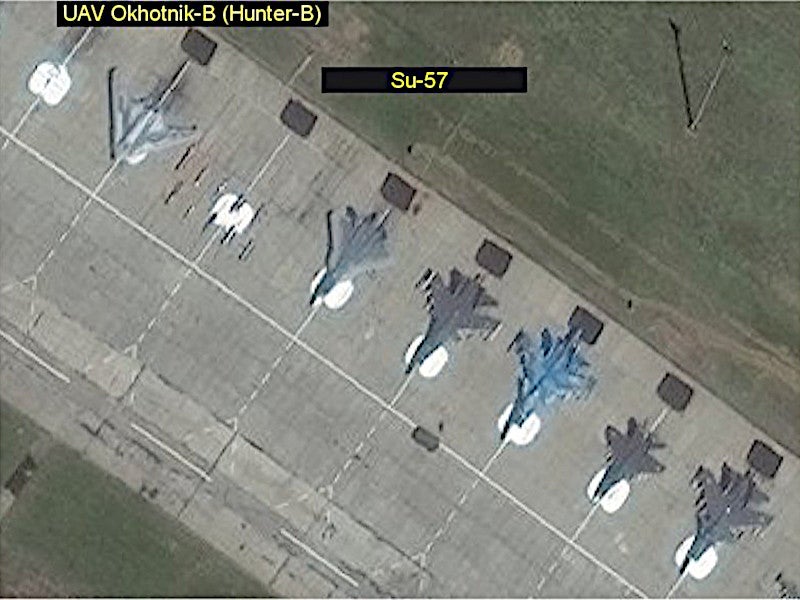 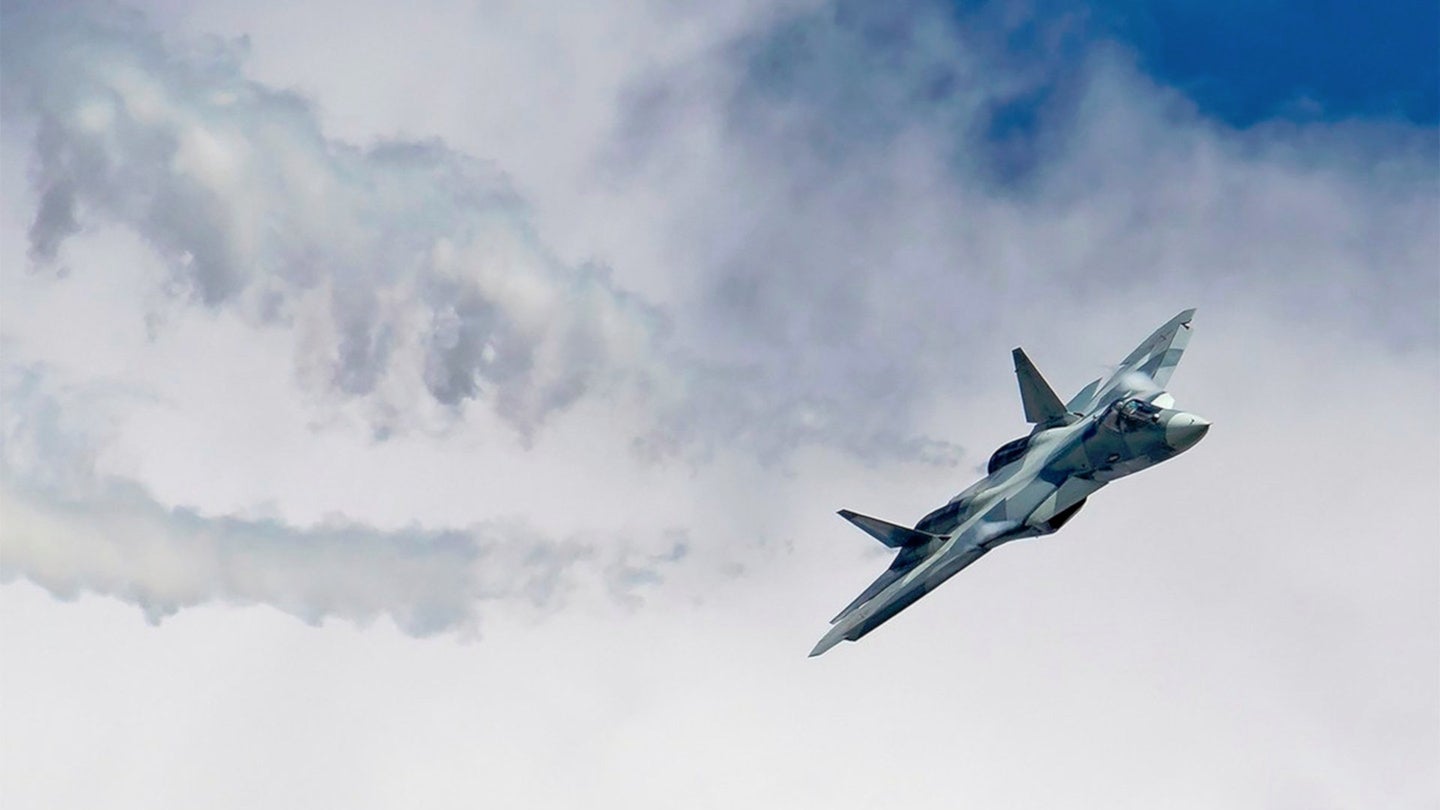 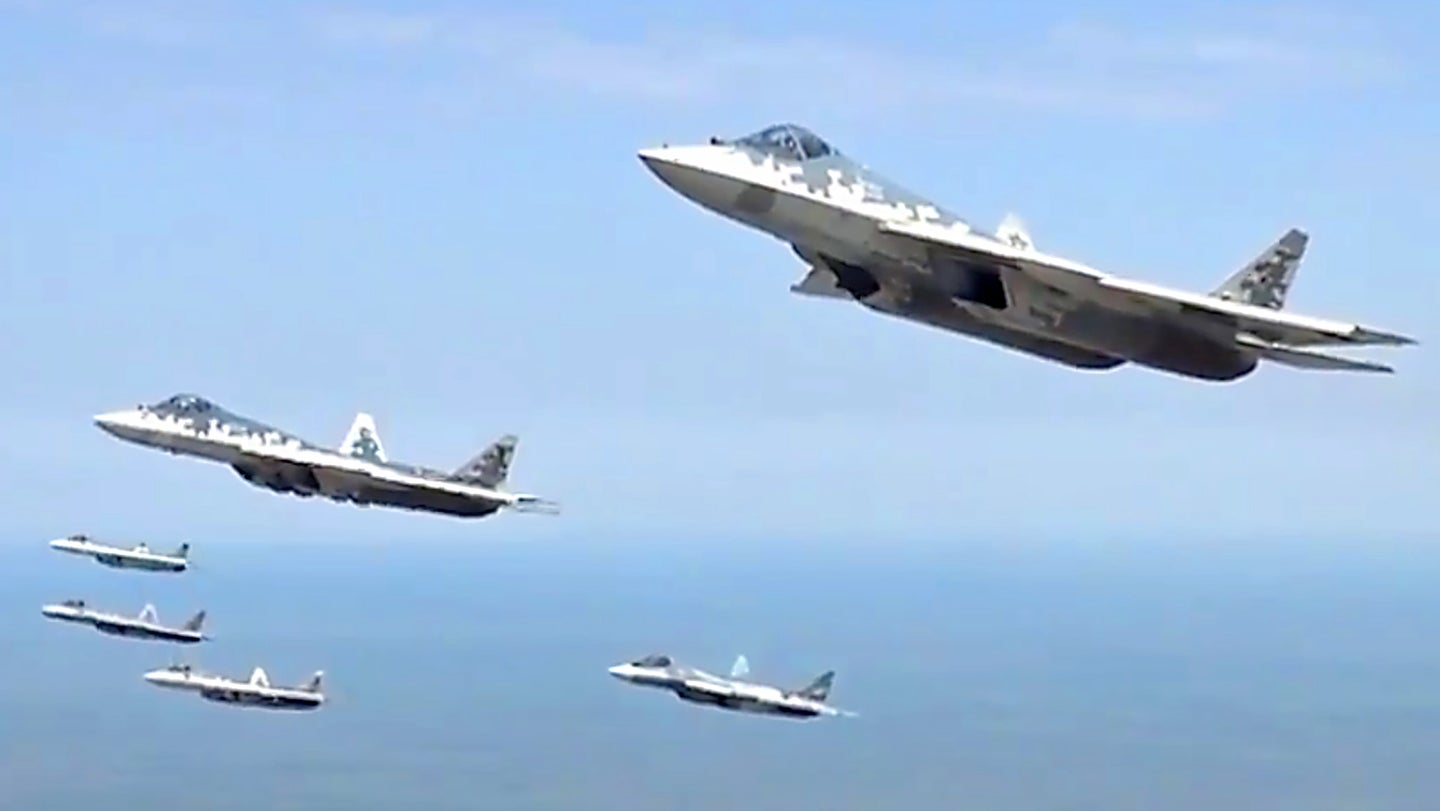 The Russian leader very publicly inspected some of the country’s most advanced aircraft and air defense systems.