They tend to skip the “hand your ticket to the conductor” part. 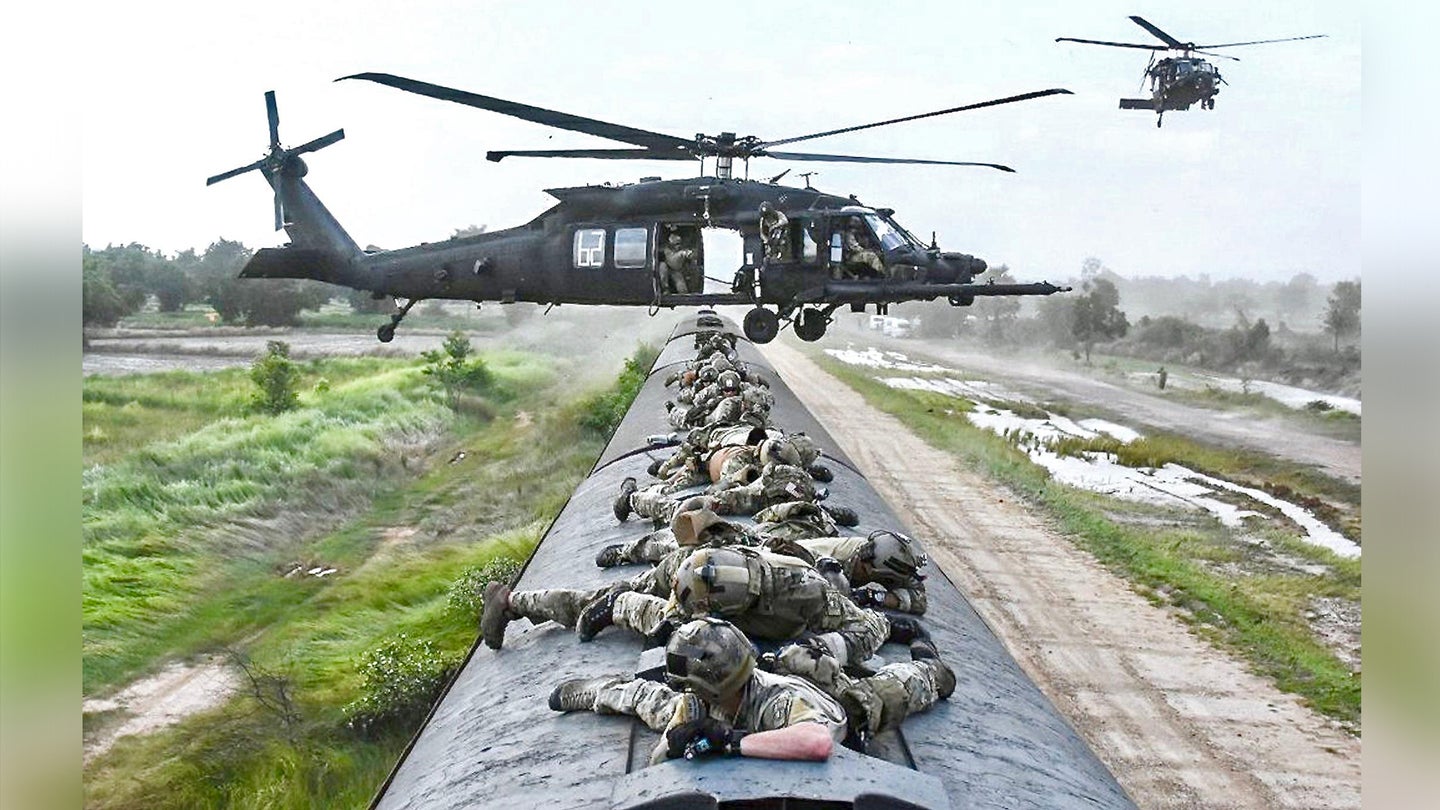 It should come as no surprise that U.S. Army Special Operations Forces (SOF) have many mission sets and scenarios that must be trained for and rehearsed constantly to maintain proficiency. This is the mark of a truly professional organization. However, some of the methods are quite, well, unique within an already unique community. Case in point, rapidly dropping special operators onto the roof of a moving train that may be full of some pretty nasty people who have no intention of welcoming them on their rail-borne voyage.

Assaulting a moving target is most often realized as a moving automobile that must be disabled before the assaulters move in. However, it isn’t always practical to use this method due to a number of factors, the most glaring being that the moving target may simply be too large to immobilize easily. As a result, SOF operators must be placed on that object to assault, gain control of, and/or disable it.

It is easy to understand how this method could come into play in the Strait of Hormuz, with a confrontation between allied SOF and Iranian vessels or to take control of ships underway. But a lesser-known mission set is to actually assault a moving train—a skill that is rehearsed by our most elite SOF units.

In the photo below, taken in 2017 in Thailand, members of the Army's 1st Special Forces Group are conducting a similar assault of a moving train with members of the Royal Thai Army. In this case, an MH-60M helicopter belonging to the legendary 160th Special Operations Aviation Regiment (SOAR), better known as the Night Stalkers, is used as the assault team delivery platform.

Under some circumstances, a significant number of assaulters must be delivered to a moving train. In order to place them on the train quickly and evenly, the pilots must actually move the helicopter slightly slower than the train so the operators can jump out onto an open spot on the roof below without falling onto or into the person in front of them.

Like some sort of complex three-dimensional conveyor system, as the Black Hawk hovers sideways and as the train passes below, special operators quickly exit the helicopter and fill the train's roof area. Remember, the train could be moving at high speed with obstacles whooshing by, turbulent air whipping around its cars, and crosswinds all making holding position an even greater challenge for the pilots. Rain and other weather can also play into the equation and there are additional non-atmospheric factors to contend with, as well, like bad guys that may be heavily armed. Oh, and all this could all be happening in the pitch-black darkness of night.

In the photo below you can see the Royal Thai Army commandos exiting onto the same train. A chain and cable rigging is used in the training scenario to maximize safety.

If executed properly, a dozen operators can be conveyed safely from the MH-60 helicopter in a matter of seconds. Again, skills like this make it easy to understand why the pilots of the famous Night Stalkers have a well-deserved reputation of being the very best helicopter crews in the world.

In the photo below you can see SOF operators jumping off the “benches” attached to a Night Stalker MH-6 Little Bird onto a moving train. The helicopter is actually in the air, inches above the train car, moving at the same velocity as the train while pointed sideways.

I had the opportunity to speak with the SOF operator featured front and center in the photo about the difficult assault technique.

U.S. Army Sergeant Major Jamey Caldwell spent a 21-year career in SOF, beginning with the storied 75th Ranger Regiment. By the time this photo was taken in 2002, he was well-versed in a wide variety of complex assault techniques. He emphasized the specificity of the skills of the pilots who had to maintain perfect positioning and situational awareness for safely, and quickly deposit the assaulters on the train.

In the training scenario depicted in this photo, it was Jamey and his team’s mission to assault the train and gain control of the locomotive. Other teams may have the responsibility of neutralizing enemy combatants or securing cargo, which could be smuggled arms, weapons of mass destruction (WMD), or just about anything else your imagination can conjure up.

So, as you can see, assaulting a train is not just the stuff of Steven Seagal movies. It is an actual method that is practiced with meticulous professionalism by our best SOF warriors in case it is suddenly needed during a future crisis.