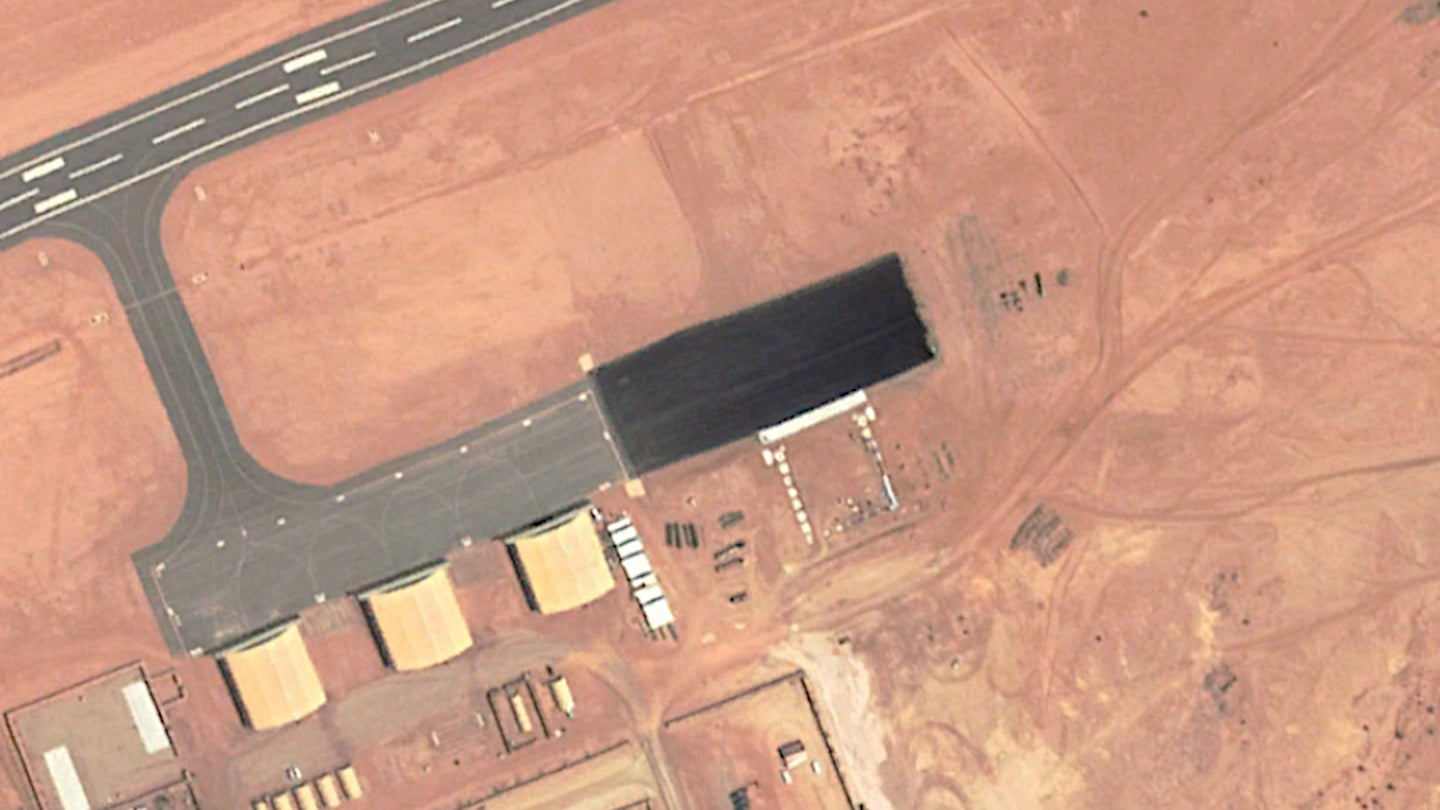 Satellite imagery shows the U.S. military is building a new approximately 20,800-square foot hangar along with its own 100,000-square foot apron and associated taxiway at its new air base outside of the city of Agadez in central Niger. The American facilities in Agadez, which will form an important regional hub for U.S. military operations in Northwest Africa, have been actively under construction since 2016. The new runway, while complete, isn't slated to open for actual operations until some time this fall.

Images from Google Earth show that U.S. personnel began work on the hangar, apron, and taxiway, in January 2019. These items are distinctly separate from the construction of three other hangars nearby, which began in 2017 and was largely complete by March 2019. Those structures have their own apron and taxiway, as well.

The reason for constructing the fourth large hangar, or who might be destined to occupy it, isn't immediately clear. When the American facilities in Agadez, which will be officially situated within the Nigerien Air Force's new Air Base 201, finally open for business, the only flying unit we know of that will call the base home will be a squadron of MQ-9 Reaper drones.

Since 2013, the 323rd Expeditionary Reconnaissance Squadron has flown Reapers in the region from an American base the Nigerien capital Niamey. Those facilities are attached to the Nigerien Air Force's Air Base 101 and Diori Hamani International Airport. When the U.S. base in Agadez begins operations, all of the Reapers in Niamey will head there to continue operations.

However, the 323rd was not among the units assigned to the 409th Air Expeditionary Group, which controls all regular Air Force activities across Northwest Africa, according to an official statement a spokesperson for U.S. Air Forces Europe and Air Forces Africa (USAFE-AFAFRICA) provided to The War Zone in an Email in May 2019. Instead, the only flying unit the 409th officially controlled at the time was the 324th Expeditionary Reconnaissance Squadron, which has been supporting U.S. operations in Africa from Naval Air Station Sigonella on the Italian island of Sicily since March 2011.

As of May, the 409th, which had moved to Agadez in June 2018, also oversaw the 724th Expeditionary Air Base Squadron that handles day-to-day activities in Agadez and the 768th Expeditionary Air Base Squadron, which performs the same administrative mission in Niamey. The rest of the Group's assigned units consisted of the 409th Expeditionary Security Forces Squadron, the 31st Expeditionary Rapid Engineer Deployable Heavy Operational Repair Squadron Engineers (RED HORSE), and elements of the 4th Expeditionary Space Control Flight. The latter unit helps monitor satellite communications and data sharing capabilities, which are particularly important for drone missions, which typically involve pilots and sensor operators actually flying missions from bases in the United States.

That same month, the U.S. Air Force also announced it was temporarily repositioning a number of MQ-9s belonging to an unspecified unit to Greece while an undisclosed base that the drones normally operated out of in Africa underwent construction. This could potentially explain the absence of the 323rd at that time.

Regardless, it is possible that Air Force has decided to consolidate the two MQ-9 units at Agadez, which might have created a requirement for more hangar and apron space there than the service originally expected. One of the main reasons the U.S. military is establishing the base in Agadez, to begin with, is so that Reapers will be able to operate from a more central location that will improve their ability to conduct missions across Northwest Africa.

In late 2017, U.S. and Nigerien governments also came to an agreement about conducting armed drone operations from bases in the country, which could have created requirements for more expansive facilities to handle the storage and loading of munitions. To date, there has been no official confirmation of any armed MQ-9 sorties originating from Niamey.

Regardless, the United States is actively engaged in supporting countries throughout the region combat a number of different terrorist groups, many of whom have at least loose ties to Al Qaeda and ISIS, something The War Zone

has explored in detail in the past. In 2017, one of these myriad groups, the ISIS-affiliated Islamic State in the Greater Sahara (ISGS), infamously ambushed a group of U.S. special operations forces and support personnel, along with a Nigerien partner force, outside Tongo Tongo in the western portion of the country near the border with Mali. Four Americans died in the ensuing firefight, which The War Zone has covered in depth in the past here and here.

U.S. forces in Agadez had also brushed back what appeared to be a possible attack on the base in 2016. Terrorist activity in the region has increased in recent years, in general, which has also prompted demands for increased drone coverage, even just for intelligence, surveillance, and reconnaissance missions. Persistent aerial surveillance has been one of the main methods the U.S. military has employed to keep tabs on militant and terrorist groups across Africa, who regularly exploit the limited ability of many countries on the continent to actively monitor remote, largely uninhabited areas within their borders.

With this in mind, it is important to note that Agadez will also serve as a larger hub for U.S. military operations throughout Northwest Africa beyond simply serving as a staging point for MQ-9s. For the very beginning, the base's runway needed to be able to support cargo aircraft as large of the C-17 Globemaster III airlifter. C-17s, as well as C-130s, have already been making regular use of the expanded runway at Agadez's Mano Dayak International Airport to bring in vehicles, personnel, equipment, and supplies.

The additional hangar could provide important maintenance space for these and other transient aircraft. It could also support contractors, who also provide important ISR and personnel recovery capabilities across Africa. It is not clear whether contract fixed-wing aircraft and helicopters presently flying from Niamey in support of U.S. military operations will move to Agadez, as well, when that base opens.

The hangar could also help shield any aircraft at Agadez from the elements, if necessary. Sandstorm routinely sweep through the area and are one of the main reasons, together with extremely high temperatures, why the construction of the new facilities at Agadez has taken so long. The Air Force's original goal was to have the base up and running by the end of 2017.

"U.S. Air Force Airmen have completed several major construction projects at Nigerien Air Base 201 to include the runway and significant portions of infrastructure," the USAFE-AFAFRICA spokesperson told The War Zone by Email in May 2019. "As with any new airfield, there are assessments that must happen and procedures that must be developed before flying operations can occur."

It remains to be seen whether or not the runway at Agadez will open as scheduled by the end of this year. What is clear is that the facility is still growing and is already in the process of getting significant new additions even before flying operations start.