Firebird has been flown aboard a 747 to the U.K. for the country’s biggest air show and aerospace expo that kicks off this weekend. 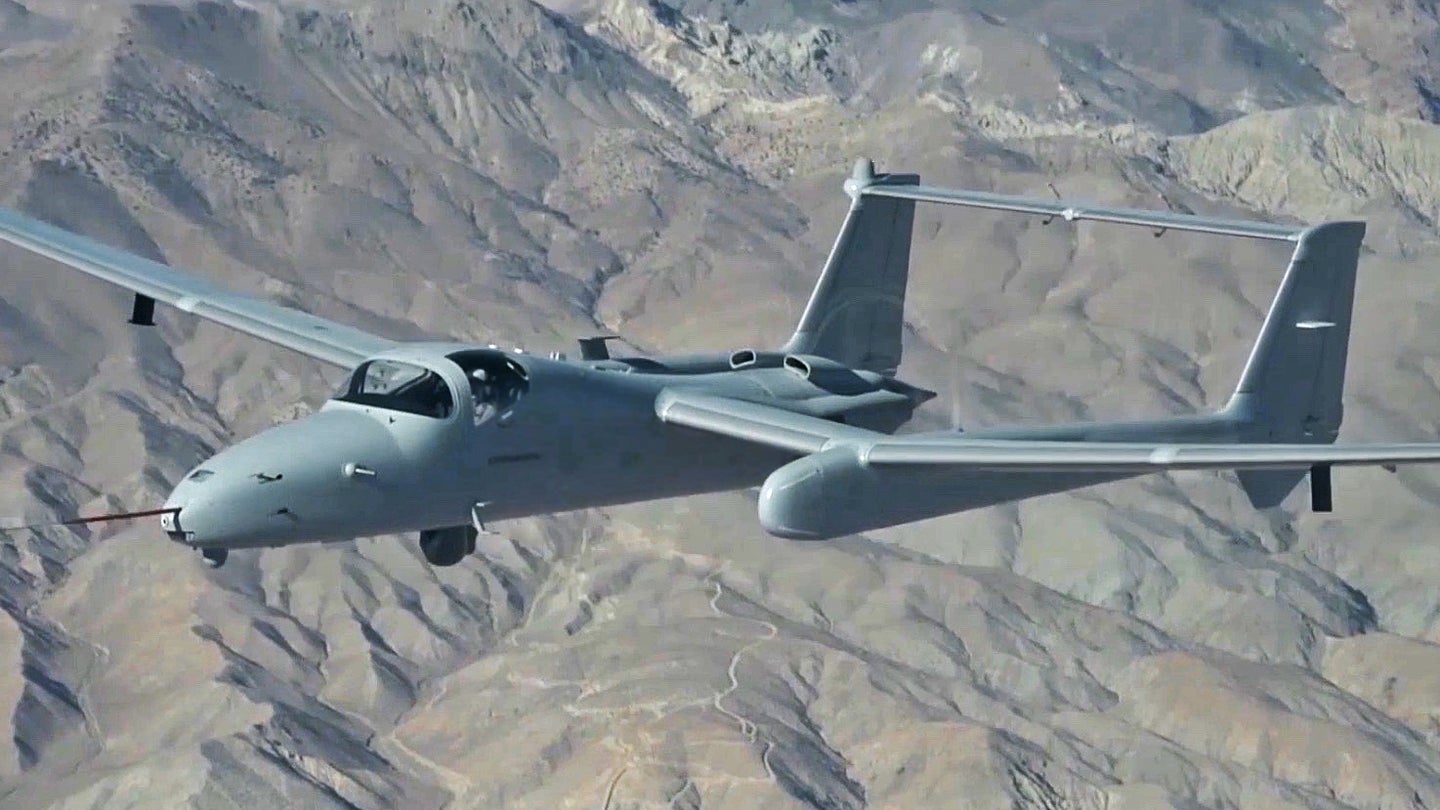 In a follow-up segment about a program that we have been tracking very closely over the last few years—Northrop Grumman's potentially game-changing Firebird optionally manned medium-altitude, long-endurance (MALE) surveillance aircraft—we have new information regarding who will be operating the aircraft in the not so distant future. Although Firebird already has orders from U.S. government agencies that can't be disclosed, it now has its first customers that can be. Those customers are Grand Sky and Tenax Aerospace.

According to Northrop Grumman, Grand Sky, which has a primary operating location at Grand Forks Air Force Base in North Dakota, is the country's first unmanned aerial vehicle testing and training center. The facility is co-located with vast swathes of airspace that can be used for unmanned flights and has already been approved for beyond-line-of-sight (where satellite data-links provide connectivity) operations of unmanned aircraft. Air Force RQ-4 Global Hawks, another Northrop Grumman product, are also based in Grand Forks.

Grand Sky currently offers unmanned aircraft training, research and development, and support services, so it isn't too hard to imagine how the ultra-flexible and low-cost Firebird fits perfectly into that portfolio.

“We are excited to bring Firebird to Grand Sky and to utilize its long-endurance and variable payload capabilities for commercial customers. Our goal is to support energy infrastructure monitoring and humanitarian and disaster relief operations by leveraging Firebird’s range, altitude and endurance... We see the incredible efficiencies to be gained in the market with technology like Firebird, enabling affordable data gathering on a scale not previously available to the commercial market space.”

The other customer is one that Northrop Grumman had discussed being deep in discussions with before regarding Firebird—Tenax Aerospace. The idea is that Firebird won't only disrupt the surveillance aircraft market by being optionally manned and featuring extreme ease of converting the craft from manned to unmanned mode, and vice-versa, but that its low acquisition and operating cost will allow it to also break the mold when it comes to who can afford such a capability and when. Buying Firebird's services turnkey as needed from a company that owns and operates the aircraft themselves, Tenax Aerospace in this case, or sharing them among a number of government or non-government entities, or even buying payload time on flights that are already planned, are just some of the ways the system can potentially break down the door when it comes to a much larger potential customer base accessing this level of surveillance capabilities.

“Firebird allows Tenax Aerospace to bring industry-leading adaptability and flexibility in data collection at an extremely affordable price point to meet the needs of our sophisticated U.S. government and global security customers... Firebird provides a unique flexibility and responsiveness that we feel is essential for the critical missions we support today and in the future.”

With two new customers now officially under its belt, both of which will help lay a foundation for future growth and exposure of Firebird to potential users and purchasers, the aircraft is set to make its air show debut at the Royal International Air Tattoo that kicks off on July 19th at RAF Fairford in England. The aircraft was flown over to the U.K. aboard a 747 freighter—an example of its designed-in ability to be easily disassembled and reassembled for international transport. Special shipping fixtures were fabricated for this inaugural shipment that will likely inform the design of future air-transport support systems for production Firebirds. The aircraft can also self deploy, but considering it is made to loiter at lower speeds, international trips may be better made by airlifting the aircraft into a region.

This all comes as Firebird has just successfully closed out its primary flight testing program. The Firebird team now looks to execute individual demonstrations for customers at various locations over the rest of the year and will work to further develop the system as needed based on the demands and input of those potential customers.

The aircraft's payload-carrying capability is totally modular in nature and it already has the ability to lug aloft a diverse menu of roughly two dozen sensors, communications systems, and electronic intelligence gathering payloads. Furthermore, it has been tested carrying five separate payloads internally simultaneously and the aircraft has three external hardpoints that could also be leveraged in the future. Northrop Grumman is targeting a huge array of users for Firebird, from militaries to law enforcement and border agencies to environmental and wildlife monitoring groups to the commercial sector. With this in mind, the program is openly inviting companies that may have applicable payloads to integrate them with the aircraft.

As for performance, according to the Firebird team, the aircraft has proven to be even more efficient during flight testing than what its designers had originally modeled and it will be able to fly its 30-hour endurance or more at typical weights and configurations. Keep in mind, it is doing this using an avgas-sipping piston engine derivative that is common in the general aviation community.

We'll see if any other potential Firebird customers publicly show interest or even get announced as purchases at RIAT. Yet it is becoming clearer as time goes on that the success of Firebird may not be gauged by how many operators purchase it, but more so about how many entities consume the products it creates and the services it provides.

We will keep you up to date as Firebird continues its rise on the international aerospace stage.

The optionally manned, medium-altitude, long-endurance surveillance plane is meant to be quiet, which explains its strange acoustic signature.

New photos give us a much more complete view of the aircraft, clearly showing its lineage to Scaled Composites’ Firebird long-endurance design.