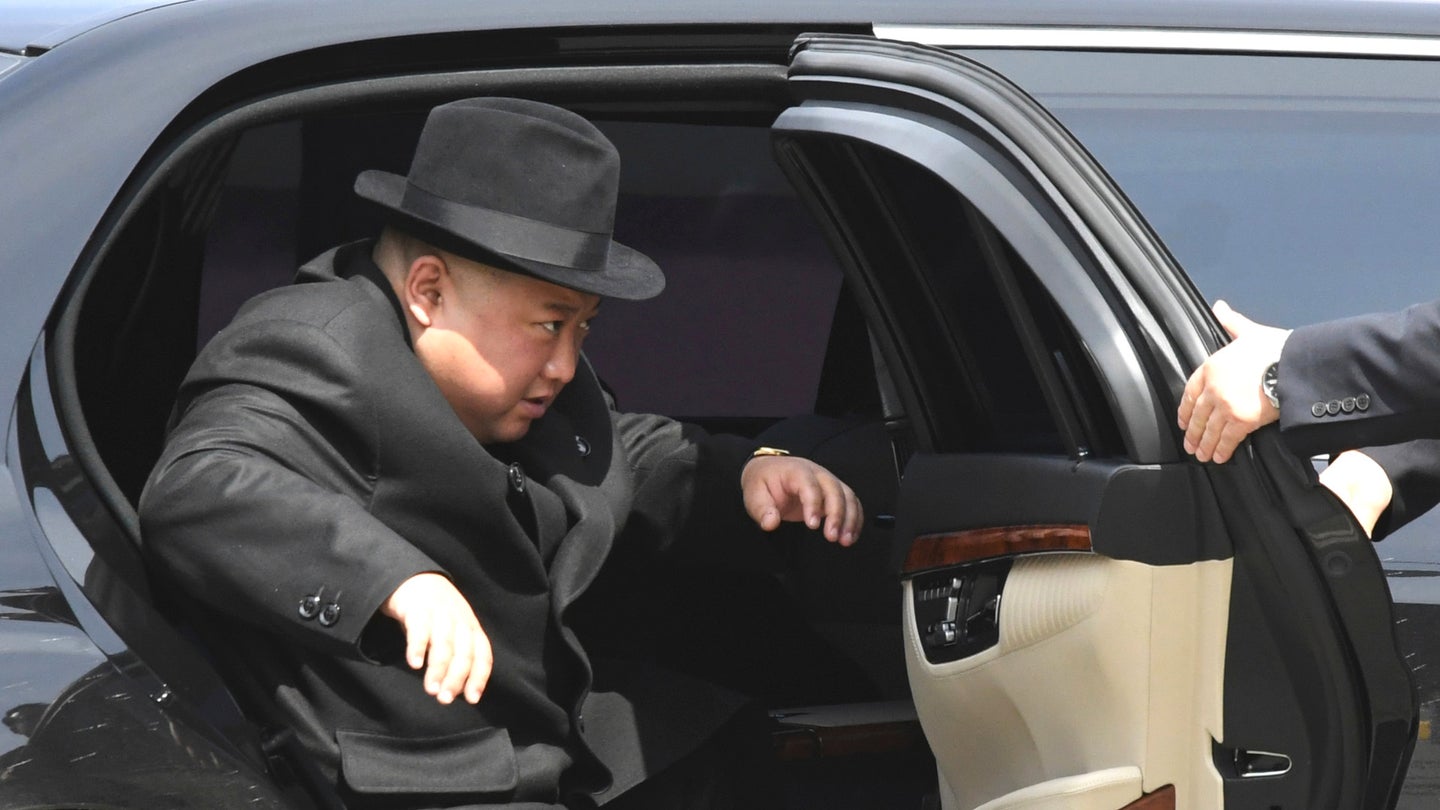 A new report says that North Korean premier Kim Jong Un's newest limousine, a late body armored Mercedes-Maybach S600s that first emerged publicly in February 2019, got smuggled into the country via a circuitous route that included stops in China, Japan, South Korea, and Russia. The purchase and delivery of this vehicle, along with a second S600 in the same shipment, underscore North Korea's extensive sanctions-busting networks, which this same investigation says has enabled the regime in Pyongyang to import more than 800 foreign cars and trucks, including luxury models, in total from multiple countries since 2016.

The Center for Advanced Defense Studies, or C4ADS, a Washington, D.C.-based nonprofit, in partnership with The New York Times, released its report on July 16, 2019. The report also notes that analysts used "software and systems" from Palantir, a California-based software and big data analytics company with major ties to the U.S. Intelligence Community and the U.S. military, to support their work. The analysis focuses heavily on the particular case of two Mercedes-Maybach S600s, at least one of which appeared publicly for the first time just weeks before Kim met U.S. President Donald Trump for a second summit in Hanoi, Vietnam.

The exact origins of the S600s remain unclear. Daimler, which presently owns the Mercedes and Mercedes-Maybach brands, markets the armored Pullman Guard version of these vehicles specifically to VIPs, including government officials, and says it conducts background checks on all prospective buyers. The company has previously gone on the record to deny selling these cars, or any others, to individuals serving as fronts for North Korea.

Part of the issue is that the cars may not actually be from-factory S600 Pullman Guards, but rather S600s that subsequently received an armor package from a third party company. In looking at the North Korean video footage from February 2019, NK Pro had pointed out some differences between the armor visible inside the door of Kim's S600 from that of a standard S600 Pullman Guard.

Whatever the case, in June 2018, the cars, each in separate shipping containers, arrived at the Port of Rotterdam in the Netherlands, according to C4ADS. A Dutch freight forwarding company, Slavenburg & Huyser B.V., then put them on a ship to Dailan, China. After arriving at the Chinese port, a Japanese trading company, Zuisyo Company, signed for the containers and had them shipped again to Osaka, Japan.

While in Japan, another freight forwarding company called Mino Logistics Japan subsequently took responsibility for the containers and then sent them to Busan, South Korea, where South Korean firm Mino Logistics Company signed for them. C4ADS says it could not verify whether these two companies are related despite their nearly identical names.

What happened after the cars arrived in Busan on Sept. 30, 2018, is the crux of the story. Reportedly, dockworkers loaded the cars onto DN5505, a Togo-flagged cargo ship belonging to Do Young Shipping Company, which has its headquarters registered in the Marshall Islands. Shipping records indicate that Zuisyo Company had been the one to formally ship the cars to Do Young by way of the other freight forwarding firms.

This is when things get murky. Shortly after taking on the cars in Busan, DN5505 set sail with its stated destination being Nakhodka, Russia and estimated arrival date of Oct. 5, 2018. The ship appeared to turn off its transponder on Oct. 1 and the signal did not reappear until Oct. 19, an 18-day gap.

When the ship's transponder began broadcasting again, it was heading back to Busan. C4ADS found no reports that the vessel had arrived in Nakhodka, or any of five other Russian Far East ports, on or about Oct. 5. However, after arriving in Pohang, South Korea, the ship's crew informed South Korean customs officials that it had picked up a cargo of coal in Nakhodka.

Also, on Oct. 7, 2018, Air Koryo, North Korea's state airline, had dispatched three Il-76 Candid cargo planes to Vladivostok in Russia, which is around three hours driving distance to the east of Nakhodka. C4ADS says that Air Koryo's Il-76s, which are capable of carrying vehicles and often bring limos and other cars to support Kim's foreign trips, do make trips to Vladivostok, but they do so irregularly. The October visit, which was otherwise unscheduled and did not appear to be in relation to any other known North Korean state activity, was the first time any of the planes had flown there since July 2018.

The belief is that the Il-76s then brought the S600s back to North Korea. Four months later, North Korean state media released video of Kim getting driven around in one of his new limos. All of this would seem circumspect enough to raise questions by itself, but Do Young and DN5505 are also at the center of separate allegations of violating sanctions with regards to North Korea.

In February 2019, South Korean authorities seized DN5505 as part of an investigation into exports of North Korean coal in violation of international sanctions. That same month, South Korea detained the Panama-flagged tanker Katrin, the only other ship Do Young owns, on suspicion of delivery petroleum products to North Korea, again in violation of international sanctions.

DN5505's owner appears to be Russian businessman Danil Kazachuk, who was also listed briefly in 2018 as Katrin's owner, according to C4ADS' investigation. Kazachuk, who also owns an auto shop in Vladivostok, denied being responsible for what the ships carried in an interview with The New York Times, but he was also flippant about whether or not he was aware of or involved in the smuggling of the S600s.

"This is my company’s business secret,” Kazachuk told The Times by phone from Russia. "Why do I need to tell everybody where I bought these cars and to whom I sold the cars?"

Separately, the United Nations is also investigating Enermax Korea for violating sanctions on North Korea. Enermax is also tied to the detention of the North Korean-flagged coal ship Wise Honest in Indonesia in April 2019. That ship is now in U.S. government custody.

Enermax has denied allegations that the coal on board DN5505 when it arrived in Pohang last year was actually from North Korea. Enermax also says it was working with a party in Indonesia to buy coal, but that that deal fell apart before any money changed hands. An unnamed representative for the company also called into question how the ship could have carried the cars at all in an interview with NK Pro.

"There is a ship hatch on a coal vessel," the Enermax official explained, according to NK Pro. "We open a hatch-cover and put coal into [the container]. But how can they load up the cars?"

This, of course, discounts the possibility that the ship has modifications specifically for the smuggling of other items. DN5505 notably also has links to Ocean Maritime Management, a company tied to North Korean arms smuggling.

The investigation into Enermax is ongoing and The Times notes that there is also no hard evidence linking Kazachuk to North Korea's smuggling network's directly. However, the murky nature of both his connection to the ships in question and who exactly owns and operates Do Young Shipping only underscore the kinds of gray areas that the regime in Pyongyang is able to exploit.

C4ADS' investigation says that there are strong indications that these sort of realities helped North Korea, by way of its own front companies along with legitimate shipping and freight forwarding companies, import a total of 803 foreign-made cars, including luxury models, across 82 individual shipments between February 2016 and November 2017 alone. The vast majority of these vehicles were purchased in Russia, though actual Russian makes, such as 4x4 UAZ Patriot sport utility vehicles, made up less than 10 percent of the shipments.

The United Nations has even implicated firms in the United States of being involved or otherwise wrapped up in this international smuggling operation. In May 2019, in response to a Freedom of Information Act request from The War Zone, the Department of the Treasury's Office of Foreign Asset Control refused to confirm or deny the existence of any investigations into any companies over the involvement in the delivery of luxury vehicles to North Korea.

The shipments of cars also clearly continued beyond the period from 2016 to 2017 that C4ADS examined. While the North Korean regime was working on getting the two S600s into the country in October 2018, Kim Jong Un arrived at a meeting with U.S. Secretary of State Mike Pompeo in a previously unseen Rolls Royce Phantom.

All of this comes at a time when North Korea is continuing to argue for sanctions relief, particularly from the United States, in exchange for progress on talks related to its controversial nuclear weapons and ballistic missile programs. But C4ADS' report clearly shows that the country has developed extensive means for getting around those sanctions in the meantime, both in order to prop up the regime and meet the demands of Kim and his inner circle for foreign luxury goods.

The United States has continued its push to sanction firms in other countries, such as Russia and China, who are enabling North Korean imports and exports in violation of international sanctions. At the same time, unfortunately, both of those countries have shown either an inability or an unwillingness to clamp down on violators themselves, as they work to improve their own ties with Pyongyang.

C4ADS' report argues that improved, unified export controls and definitions about what constitutes luxury goods could help in both identifying and targeting "commercial facilitators" and then better focusing sanctions on where they would hurt Kim's regime the most. It's certainly true that common agreed-upon standards, and more universal implementation of them, can only help in sanctions enforcement.

At the same time, the journey of the S600s to North Korea between June and October 2018, a trip that involved at least five different companies across five separate countries, highlights just how difficult it is to truly isolate the regime in Pyongyang from an only increasingly interconnected global economy.

Regardless of what happens now, it is clear that the existing sanctions regime has been largely ineffective in preventing Kim and his inner circle from acquiring new luxury vehicles, even when those deliveries pass right through countries that are supposedly watching very closely for potential violations.