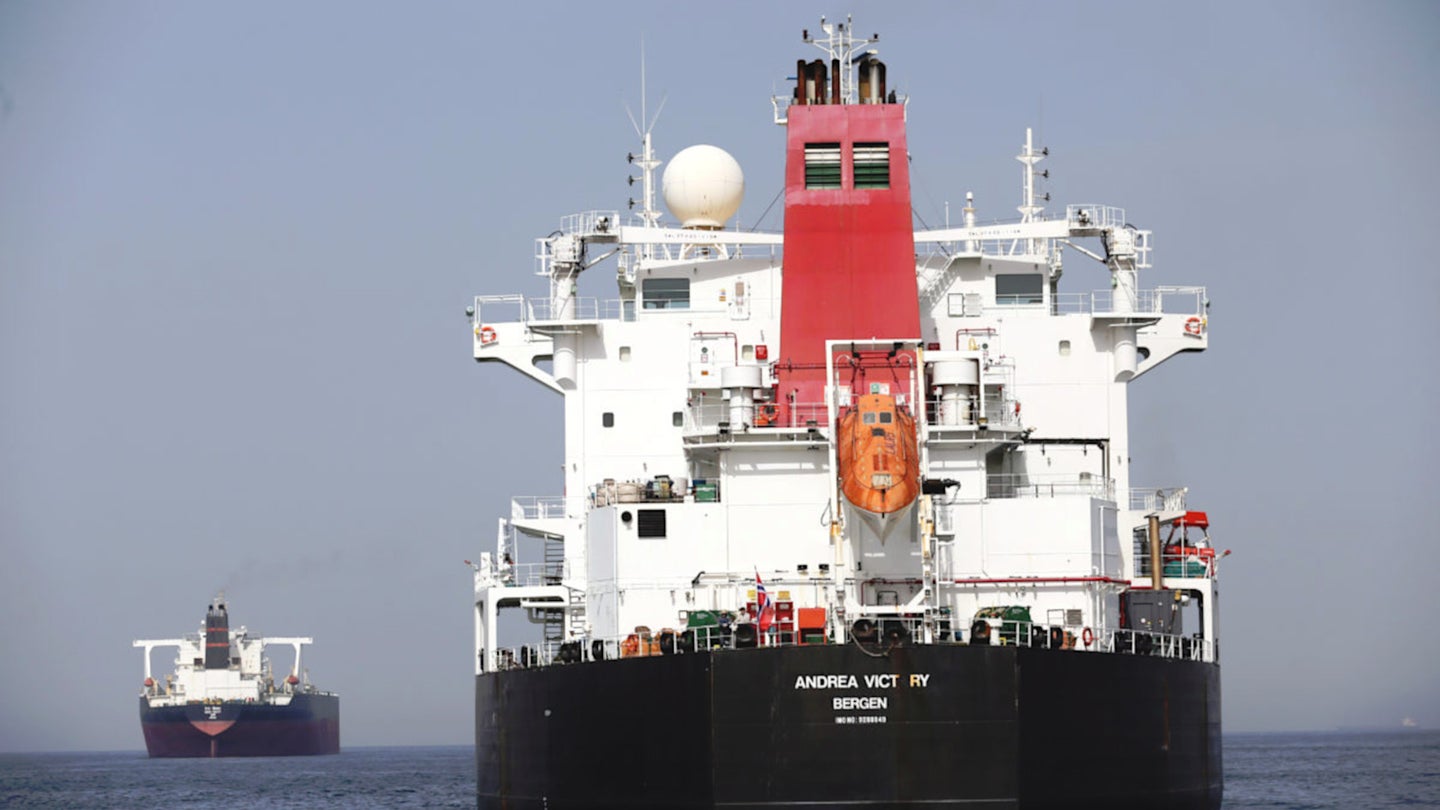 In a curious twist of events, the Norwegian-flagged Andrea Victory, one of four oil tankers the U.S. government says were victims of attacks by Iranian forces or their proxies in the Gulf of Oman in May, is now on its way to complete delivery of its cargo to Iran. In the Mediterranean, there also continue to be confusing and conflicting claims surrounding Grace 1, an Iranian tanker reportedly bound for Syria that British security forces seized last week off the coast of Gibraltar, which Iranian authorities now say was going "somewhere else."

The tanker had offloaded her cargo of vegetable oil, which she had originally picked up in Argentina, following a still nebulous attack on May 12, 2019, in the Gulf of Oman near the port of Fujairah in the United Arab Emirates. That left the ship with a hole in her empty aft peak tank, which required it to go into dry dock for repairs.

Nearly two months later, no group has publicly taken responsibility for the attack on Andrea Victory or any of the three other tankers that also suffered damage off the coast of Fujairah in that incident. The United States has blamed Iran or proxies for carrying out the attacks, as well as subsequent attacks on two more tankers in a part of the Gulf of Oman closer to Iran in June 2019. Iran has strenuously denied involvement in either of these incidents.

"Suspicious doesn't begin to describe what likely transpired this morning," Iran's Foreign Minister Javad Zarif said regarding the second set of attacks in June. The revelation that Andrea Victory's final destination was Iran is likely to fuel this narrative that some other party may have staged these tanker attacks in order to provoke a confrontation with the Iranian regime.

However, so far, there is no hard evidence to support this theory, while there are significant indications that Iran was at least involved in some way in the June attacks. It is equally possible that Iranian forces or their proxies had targeted Andrea Victory in the May incident to help cast doubt on the country's involvement or that they simply struck tankers at random.

In May 2019, Reuters had also reported that the Norwegian Shipowners’ Mutual War Risks Insurance Association, also known by the Norwegian acronym DNK, had concluded that it was "highly likely" that Iran or its proxies were responsible for the attack on the tankers off Fujairah. DNK reportedly made its assessment based, in part, on similarities between what had happened to Andrea Victory and attacks that Iranian-backed Houthi rebels in Yemen had launched on commercial and military ships using unmanned, explosive-laden boats. But it remains unclear what the exact weapons employed in the May attacks were and whether they included limpet mines, as appears to have been the case in the second set of tanker attacks a month later.

In the Mediterranean Sea, the details surrounding the U.K. government's seizure of the Iranian supertanker Grace 1 off the coast of Gibraltar on July 4, 2019, along with what its final destination was, are also increasingly murky. The United Kingdom says that it conducted the operation since the ship was bound for Syria's Baniyas Refinery in that country's port city of Tartus.

Baniyas is the target of European Union sanctions against the regime of Syrian dictator Bashar Al Assad. At the time of Grace 1's seizure, government-run and semi-official news outlets in Iran did not dispute the ship was heading for Syria.

"Its destination was somewhere else," Abbas Araghchi, Iran's Deputy Foreign Minister, told reporters on July 7, 2019, without saying where it was purportedly headed. "The port named in Syria does not even have the capacity for such a supertanker to dock."

Araghchi is right that Baniyas does not have the facilities necessary for Grace 1 to dock, but this would not prevent it from conducting a ship-to-ship transfer to a vessel that would then offload the oil on shore. If the tanker was not bound for Syria, it's also unclear where else it would be heading given its circuitous route.

By Iran's own admission, the ship sailed all the way around Africa's Cape of Good Hope specifically to get into the Mediterranean, reportedly because Grace 1's draft when fully loaded made it impossible to sail through the Suez Canal. In April 2019, there had also been reports that Egypt, which controls the canal, had blocked access to Iranian tankers heading to Syria. Iran has denied that the tanker made this long voyage in order to somehow escape scrutiny.

If Grace 1 wasn't going to Syria, its presence in the Mediterranean Sea would point toward a destination either in Southern Europe or North Africa. The countries in these regions are predominantly U.S. allies and partners, which might point to potential cracks in the maximum pressure campaign. By most accounts, this isn't the case, though. For instance, Greece and Italy reportedly stopped buying Iranian oil in November 2018 and Turkey followed suit in May 2019.

But even if Baniyas was actually the tanker's final destination, it brings up additional legal questions regarding the seizure. The E.U., as a matter of principle, does not apply its sanctions to non-members. In addition, Spanish authorities had initially said that the United Kingdom conducted the raid at the behest of the United States, something that U.K. officials have denied.

On July 6, 2019, CNN producer Hamdi Alkhshali also reported that the United Kingdom had seized the ship in part because of reports that it was or had been carrying unspecified weapons, which Iran subsequently denied. In May 2019, the United States did say it had received intelligence that purportedly indicated Iran might have been loading or installing missiles of some type on civilian ships, but so far no hard evidence has publicly emerged to corroborate this. A senior Iranian official has also now threatened to seize a British tanker in retaliation over the seizure of the Grace 1.

All of this comes as the United States continues to increase economic and political pressure on the regime in Tehran to try to force it to abandon its controversial nuclear program and halt other malign behavior in the region. A central part of this policy of "maximum pressure" has been American sanctions against all of Iran's lucrative exports of oil and refined petroleum products and the U.S. government's efforts to get its allies and partners to also abide by those restrictions.

Iran has responded defiantly to those efforts and tensions between it and the United States have been steadily ramping up in recent weeks. This came to a climax in June when Iranian forces shot down a U.S. Navy drone over the Gulf of Oman, which almost led to U.S. military strikes against targets in Iran. Though both countries have now taken a step back, there are reports that the U.S. government is working to build a new international coalition that would be responsible for escorting commercial shipping near Iran and otherwise stepping up monitoring of Iranian forces and their proxies in the region.

Separately, the regime in Tehran, along with the International Atomic Energy Agency, has confirmed that it has begun enriching uranium above the level set out in the controversial international deal over its nuclear program after it accused the United Kingdom, France, and Germany of failing to uphold their end of the agreement. The United States pulled out of the deal completely in 2018.

Critics say that the enrichment activities put Iran closer to a "breakout capability" to build a nuclear weapon, if the country were to decide to do so. At the same time, Iranian officials appear to be enriching at a still relatively low level with an eye toward pressuring the European parties to the Iran Deal to make concessions or otherwise further drive a wedge between them and the United States.

Though no longer party to the Iran Deal, the United States has still said Iran's decision to increase uranium enrichment will only lead to more American sanctions and efforts to isolate the country politically and economically. It seems likely that maritime shipping to and from Iran will be under increasing scrutiny in the near future as the maximum pressure campaign, and Iran's responses to it, continue to escalate.