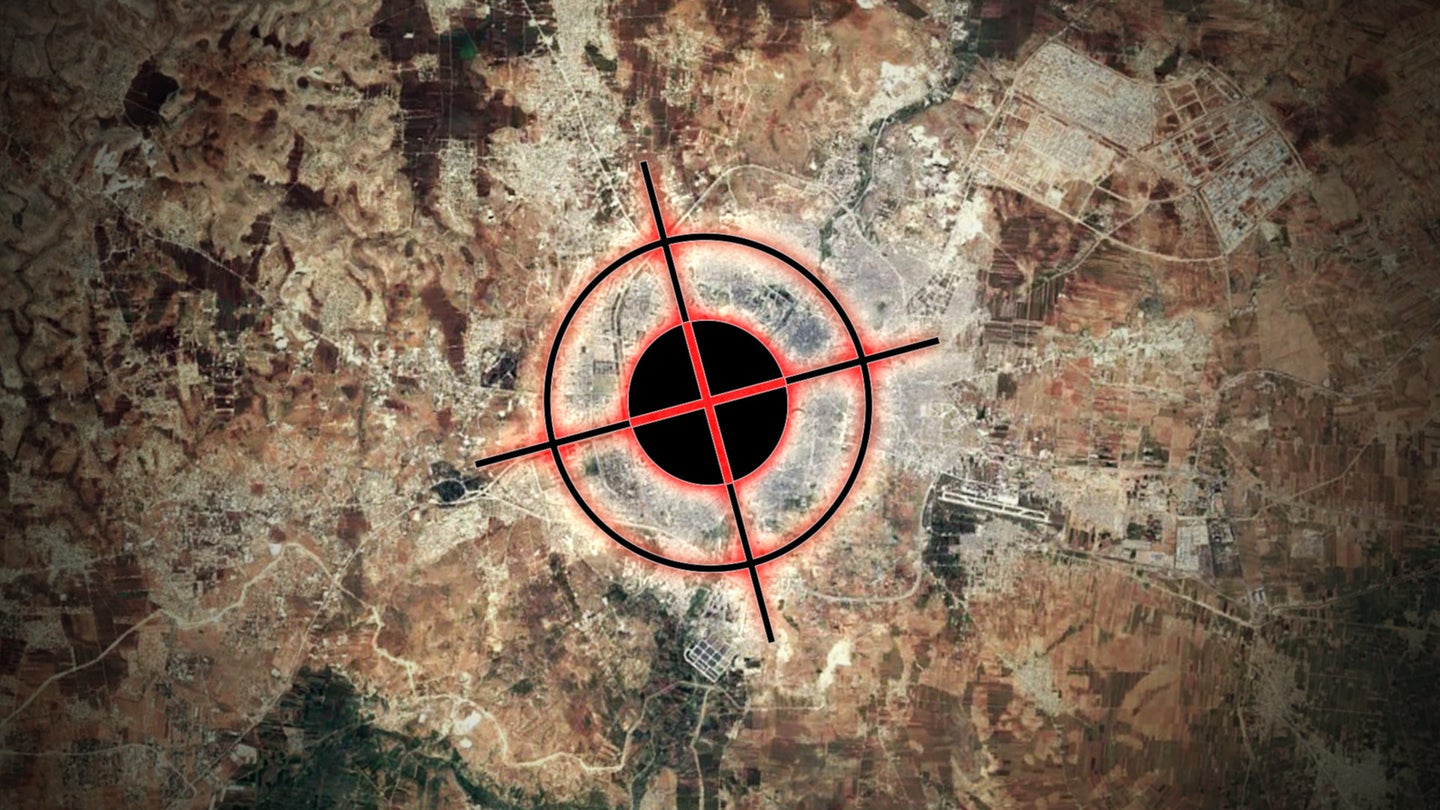 Though overshadowed by the curious case of a stray Syrian surface-to-air missile that missed attacking Israeli jets and flew out into the Mediterranean Sea only to crash in northern Cyprus overnight, the United States has confirmed that it also conducted a rare strike in western Syria targeting Al Qaeda-linked terrorists around the same time. This is the first such American strike in that part of Syria, at least that we know of, in some two years and the mission comes as the U.S. military reportedly continues to withdraw personnel from the eastern half of the country.

U.S. Central Command (CENTCOM) issued a brief press release late on June 30, 2019, saying that it had targeted leaders of Al Qaeda in Syria, or AQ-S, at a training camp "near Aleppo Province." Other reports placed the strike in the suburbs of the city of Aleppo, which is the capital of the province, though this remains unconfirmed.

The Syrian Observatory for Human Rights, a U.K.-based monitoring group, told AFP that its sources had reported that six senior members of the Syrian Al Qaeda affiliate Huras Al Din, the majority of which were not Syrians, had died in the strike, along with a number of other militants. There does not appear to be any direct link between this strike and the Israeli strikes on targets in Syria further to the south that also occurred on June 30.

"With our allies and partners, we will continue to target Daesh and al-Qaida to prevent both groups from using Syria as a safe haven," it continued. Daesh is another term used to refer to ISIS.

CENTCOM's statement did not specify what U.S. assets had conducted the strike. The operation was most likely a targeted air strike against the training camp. In the past, F-22 Raptor stealth fighters operating from Al Dhafra Air Base in the United Arab Emirates had been the only manned aircraft actually penetrating into Western Syria at all, where the threat of Syrian air defenses, as well as those belonging to the country's Russian and Iranian benefactors, are much more pronounced. Unmanned aircraft routinely fly in the area, too.

The United States and Russia had agreed to a deconfliction arrangement that established a boundary line, effectively making western Syria a no-go zone for American forces, as well. Of course, forces aligned with Syrian dictator Bashar Al Assad, including those that the Russians and Iranians have supported, have violated this deal on numerous occasions.

After a brief absence, F-22s returned to the Gulf region, this time to Al Udied Air Base in Qatar, on June 27, 2019, so it is possible that those Raptors took part in the operation. Earlier in the year, the U.S. Air Force had also deployed stealthy F-35A Joint Strike Fighters to Al Dhafra, which would have been another option for U.S. commanders deciding how to prosecute the strike. Stealth or non-stealthy aircraft could have launched stand-off weapons from Turkish air space or the Eastern Mediterranean, as well.

CENTCOM's official acknowledgment would point away from likelihood that aircraft, especially drones, from another government agency, such as the Central Intelligence Agency (CIA), were involved in the strike.

Another possibility, albeit more remote, is that the U.S. military targeted the training camp using High Mobility Artillery Rocket System (HIMARS) launchers firing guided artillery rockets from sites within Turkey. The United States has deployed HIMARS to Turkey to provide cross-border fire support in the past and has used the system for targeted strikes, as seen in the video below of one such operation in Afghanistan. The suburbs of Aleppo would be at the extreme edge of HIMARS' range if the launchers were deployed to sites very close to the Syrian border.

Regardless of the exact assets employed, the strike is still significant. In February 2017, in what appears to be the last known U.S. operation of this kind in in northwestern Syria, an airstrike killed Abu Khayr Al Masri, Al Qaeda's then-number two leader, in neighboring Idlib province, which is situated to the west of Aleppo. Idlib, which also borders Turkey, remains one of the largest strongholds for rebels and terrorists fighting Assad's regime.

It has since emerged that this air strike involved a highly specialized low-collateral damage version of the AGM-114 Hellfire missile, known as the AGM-114R9X, which has no explosive warhead and features a set of pop-out sword-like blades instead. It is still unclear whether the CIA or the shadowy Joint Special Operations Command, or both working together, were responsible for this targeted strike Al Masri. The U.S. military has never issued a statement regarding the operation.

"Idlib is essentially the largest collection of al-Qaida affiliates in the world right now," Michael Mulroy, the Deputy Assistant Secretary of Defense for the Middle East, told a gathering at the Center for a New American Security think tank in Washington, D.C., in April 2019. "We have very limited insights as to what's going on."

Underscoring the complex and often convoluted nature of the conflict in Syria, as well as the actors within it, Huras Al Din only emerged in February 2018 after splitting from Hayat Tahrir Al Sham, or HTS. HTS, previously known as the Al Nusra Front, had broken away from Al Qaeda in late 2017 and has since presented itself as a more moderate entity, fighting alongside other Syrian factions against Assad. Huras Al Din itself may be in the middle of a schism and some of the individuals who reportedly died in this latest U.S. strike had apparently taken aim at other senior leaders within the group in recent weeks and threatened to form yet another splinter faction.

This all also comes as the U.S. government insists that it is moving ahead with President Donald Trump's plan to eventually withdraw all American forces from Syria. On June 28, 2019, Defense One reported that other members of the U.S.-led coalition fighting ISIS in Iraq and Syria were planning to deploy additional personnel to northeastern Syria to "backfill" departing U.S. forces. It remains unclear how many U.S. troops will remain in the country, where, and in what capacities, as well as how much American personnel will continue to support those activities from outside the country with air and artillery strikes, intelligence and surveillance assets, and logistical assistance.

Jim Jeffery, presently the United States Special Representative for Syria Engagement and the Special Envoy for the Global Coalition to Defeat ISIL, told Defense One:

“The drawdown is continuing. The president is committed to maintaining a residual force for an indeterminate time as we continue this careful and responsible drawdown. But this drawdown was always only of American ground troops. Our expectation is the slack will be taken up by coalition forces – and we are getting a very encouraging response from them – and that we will continue to maintain our critically important air control and air operations over Northeast Syria, we will continue our ground presence at al-Tanf, and we will be ready to introduce forces to go after specific terrorist targets."

The June 30 strike on Huras Al Din, which may have killed six senior members of the group, would certainly be in line with Jeffery's comment about remaining prepared to go after specific targets and could reflect the beginning of a shift in U.S. policy toward the conflict in Syria. The U.S. government's regional attention is now much more firmly focused on Iran, where tensions have been steadily building for more than two months now. Almost two weeks ago, Iranian forces shot down a U.S. Navy drone, a major provocation that almost prompted U.S. military strikes.

There is also the question of whether the strike may represent some sort of new agreement between the United States and Russia, the latter of which has remained categorically opposed to any American military actions in western Syria. The Syrian regime, which has branded all of the groups opposed to Assad as terrorists and also launched a new offensive with Russian support to reassert control of Idlib in April 2019.

Russian President Vladimir Putin's personal spokesperson Dmitri Peskov has denied any formal cooperation, though Trump has, in the past, floated the idea of finding common ground with the Russians in Syria. Still, whether part of an actual formalized arrangement or not, the Syrians, as well as their allies, could easily see allowing U.S. strikes against Huras Al Din as being in service of the same immediate goal of suppressing militants in northwestern Syria. The Syrians and Russians will almost certainly cite U.S. military strikes on Al Qaeda-linked groups in the region to support of their own duplicitous narrative that Assad is only fighting terrorists in northwestern Syria.

At the same time, he has also publicly called for Assad and his allies to exercise greater restraint in the latest offensive in Idlib. Reuters also reported in May 2019 that the U.S. government had also signed off on new deliveries of American-made weapons, including ever-popular TOW anti-tank guided missiles, to Turkish-backed groups fighting Assad, marking a separate U.S. shift away from primarily backing Kurdish groups in northern Syria. Trump had already tacitly endorsed Turkey and its local partners in announcing his decision to pull American forces from Syria.

But whether or not the strike on the Huras Al Din actually marks the beginning of a new phase in U.S. military activity in Syria or not, it highlights the U.S. government's continued willingness to conduct targeted strikes in northwestern Syria, despite threats from Assad and the Russians, against terrorists it sees as a direct threat to American interests.