Trump Steps Over The Line

President Trump took historic steps into North Korean territory alongside Kim Jong Un and later announced talks are back on. 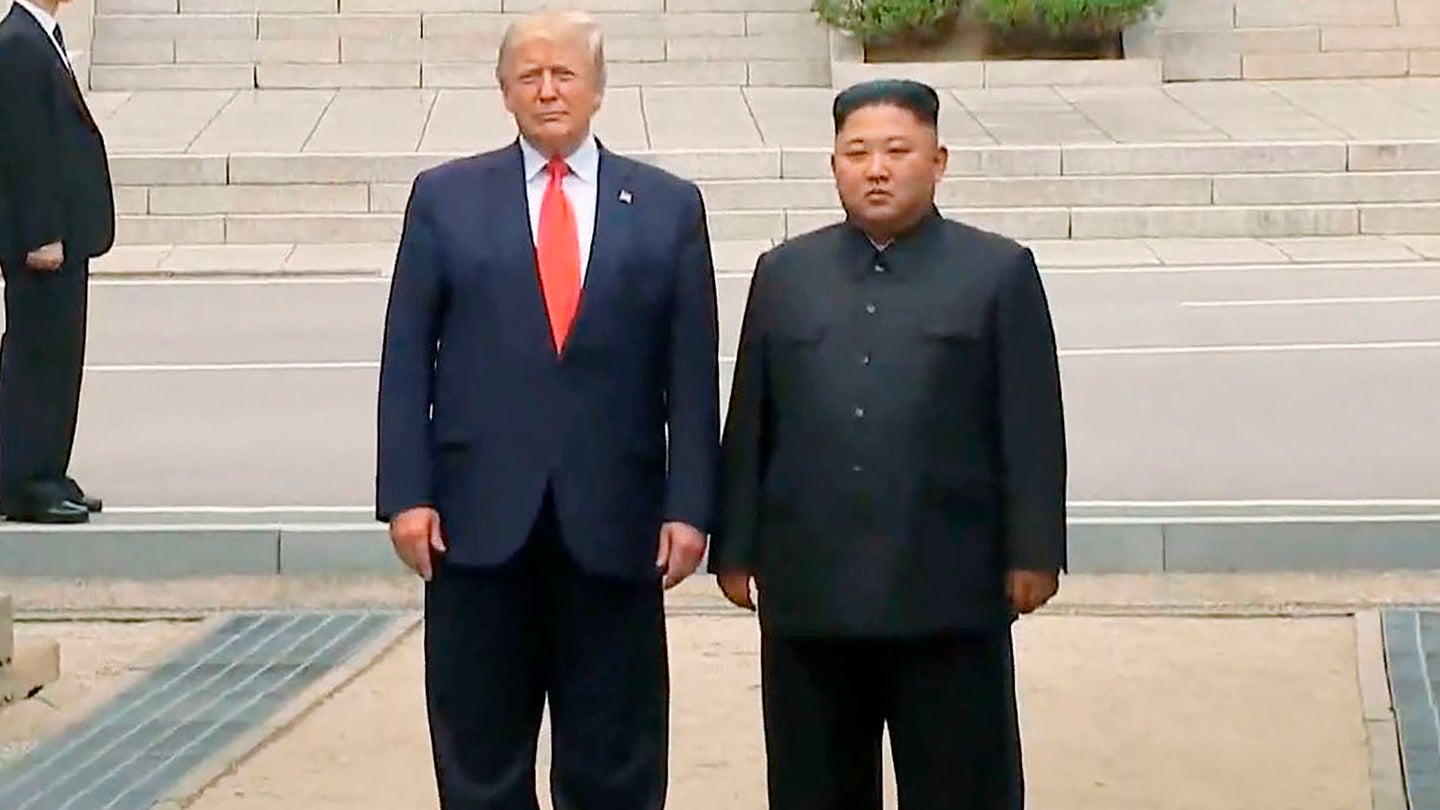 Absolutely historic moments occurred just minutes ago as President Donald Trump visited Truce Village, historically the highest profile and one of the tensest locations along the demilitarized zone that bisects the Korean Peninsula. Trump met Korean dictator Kim Jong Un at the demarcation line that runs through the site, stepped over it at the invitation of Kim, and then walked dozens of feet into North Korea territory with remarkably little security in the immediate vicinity for a photo op. It was truly an amazing, albeit hectic moment to behold.

In total, the meeting between Trump and Kim lasted roughly an hour and took place in Freedom House on the South Korean side of the demarcation line. After the meeting, Trump escorted Kim back to North Korean territory with South Korean President Moon Jae-In by his side.

As far as we know, the entire affair came together within roughly a day's time after Trump tweeted that he would like to meet Kim during his visit to the DMZ. Uncharacteristically, North Korea accepted the request within just a matter of hours via diplomatic channels and on state-run media.

Even if the Secret Service knew there was a possibility that this could occur, one can only imagine how much work it took in such a tiny amount of time to ensure the President would be safe for the unprecedented rendezvous, not just from an official act of aggression, but also from an incident resulting from confusion or the actions of a lone actor. It was truly an amazing feat in logistics and security operations to behold.

Negotiations between the two countries over North Korea's ever-growing nuclear arsenal had stalled after Trump walked out on Kim during their second summit in Hanoi last February. Although The War Zone

Kim Jong Un remains a brutal dictator and presides over a government that is one of the world's worst human rights offenders. North Korea is also no closer to nuclear disarmament now than before Kim decided to enter a period of detente prior to the 2018 Winter Olympics in South Korea. In fact, by all accounts, the regime's nuclear arsenal has only expanded since then.

Following the crumbling of negotiations in Hanoi, the entire issue had been in a state of purgatory of sorts—one which seemed particularly ideal for the North Korean regime. Still, robust sanctions have been having an impact on the country's already notoriously rickety economy and doing nothing seemed more like a tacit acknowledgment of North Korea as a nuclear state than anything else. In addition, Kim had started testing short-range ballistic missiles again, which irked North Korea's neighbors and was an ominous sign of what could come.

North Korea had also labeled Secretary of State Mike Pompeo persona non grata to future talks, meaning future progress via the State Department looked unlikely at best. A U.S. special envoy had since been named to North Korea, Stephen Biegun, but it was unclear what the change of a point man would accomplish. With all this in mind, the answer as to what the next step should be regarding North Korea's nukes seemed largely elusive, with the White House discounting the issue and claiming progress in terms of North Korea's nuclear and missile testing activities and a less confrontational state along the DMZ. All the while, Trump maintained that he had a great relationship with Kim and continued to sing his praises. The two also exchanged letters during this period, which may have got the ball rolling on the historic meeting at the DMZ.

So, was Trump's social media olive branch a good move? I think it was. We are where we are. We can debate the decisions of the recent past, but it won't change them. Trying to jumpstart talks can't do much harm as Trump has already given away the photo op of North Korea's dreams—twice—and elevated Kim on the international level. Making history by having a U.S. president step foot on North Korean soil may help further erode the distrust between the two long-time foes or it could go down as another dead-end in North Korean-U.S. diplomacy, we just don't know.

What happens next is what really matters. Supposedly, both sides with put teams together for imminent negotiations. How this will be different than before remains unclear, but another round of engagement on some non-executive level is now in the works.

Will this reinvigorated process flounder on for months again? North Korea had mastered a unique flavor of never-ending diplomatic foreplay long ago and it continues to wield it with incredible prowess. Or will the Trump Administration cut to the chase with Kim's crew? Clearly, the slow-roll wait and see attitude and the placation of North Korea's diplomatic corps' wily tactics won't go anywhere. So, we could very well be right back where we were within a number of weeks. But then the Trump Administration's second chance at negotiations with Pyongyang would have come and gone and it would be hard to argue that it isn't finally time to draft new policy surrounding the idea that North Korea has no intention to denuclearize for the foreseeable future.

So yeah, the chances that this will actually change anything are very low. But considering the stakes and where we were at up until this point, why not give it a shot?

And yes, it is troubling that the President of the United States seems to relate so well to dictators and tends to fawn over them incessantly, especially Kim. But setting that aside, this is his strategy that is unfolding and we are already deep in it whether some like it or not. It's one that is all about him and his stated ability to gain unprecedented leverage on America's most bitter foes via personal relationships and flattery. If it doesn't bear fruit then he will have to live with that highly inconvenient reality going into the 2020 election.

Still, we can't stress enough that even after this historic event, there remain zero indications of any kind that North Korea is willing to actually give up its nuclear weapons and their delivery systems. In fact, denuclearization wasn't even mentioned in any of the comments the President made today, at least that I heard.

Regardless, one thing that may unite the U.S. during these turbulent and politically-charged times is the thought of how great it would be to see the concertina wire torn down, the wild expanses demined, and Truce Village turned into a museum once and for all. That DMZ, and the standoff that goes along with it, is a cancer on humanity's soul. If Trump can somehow excise it, we should all be ready and willing to congratulate him for doing so.